• Read our immigration roundtable discussion with seven sisters working in the immigration ministry. 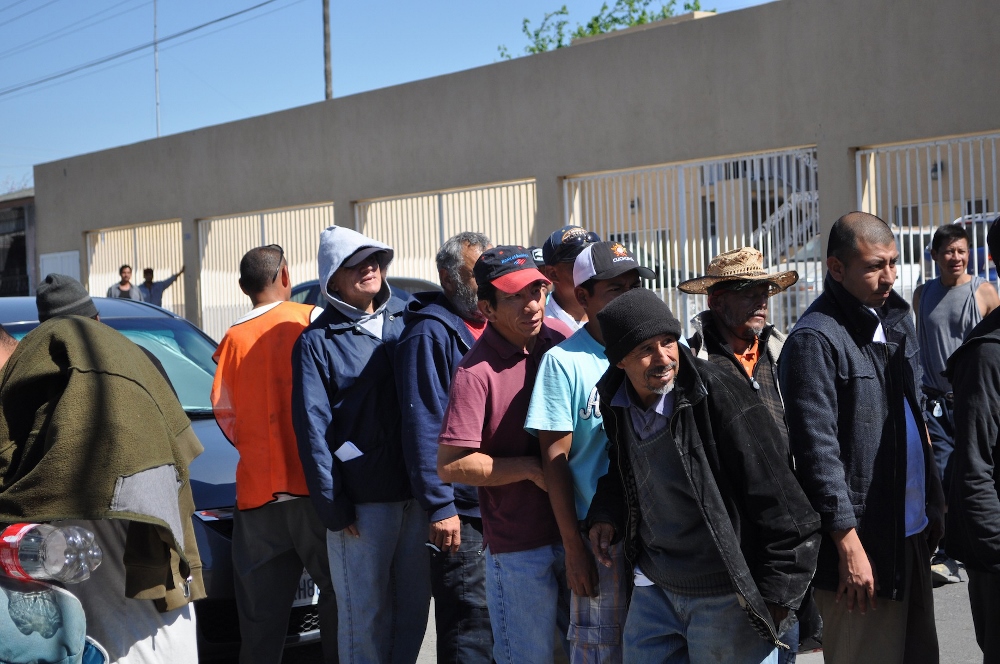 Homeless migrant men line up outside Instituto Madre Assunta for a meal. Heber Marin Velasquez, 28, from Vera Cruz, second from right, was deported from the U.S. in February. "Tijuana is dangerous," he said, "especially if people know you're not from here." (GSR photo / J. Malcolm Garcia)

Tijuana, Baja California, Mexico — These days, Sr. Adelia Contini sees more Mexicans fleeing north toward the U.S. than she does families from Honduras, El Salvador and other violence-plagued regions of Central America.

"We're seeing a lot of people from Michoacan and Guerrero," said Contini, 70, director of Instituto Madre Assunta, a shelter for migrant women and children in Tijuana, Baja California, Mexico, operated by nuns with the order of Missionnaires de San Carlos Borromeo Scalabrinians. The institute, established in Tijuana in 1994, sees about 120 women a month, many of them single mothers with one to three children, Contini said.

It offers assistance to women and children displaced by deportation from the United States or who are migrating north from Mexico. The institute provides three meals per day, clothes, shoes, legal assistance, psychological care, and access to phones and medical assistance.

"Since we were young we had the calling from God to tend migrants," Contini said of herself and other sisters in the order. She has been the director since 2009. "God gave us strength and love to look after them and help them move forward."

Contini attributed her interest in migrants from her studies of Catholic teachings that emphasized the needs of the very poor. She said the situation facing migrants grows more dire with each passing year as they attempt to flee Mexico for work and security in the U.S.

"A lot of Mexicans stay here one or two days, and then turn themselves in to the United States for asylum at the border," said Contini. "Most are turned down."

Last year, the International Institute for Strategic Studies published an armed conflict survey that put Mexico in third place after Syria and Iraq when it came to fatalities. Researchers estimated about 100,000 people have been killed in Mexico in the past decade.

High levels of crime accompanied by even higher levels of violence have resulted in part from drug traffickers competing for control of the market. Confrontations with law enforcement operations against the traffickers heighten the violence in a never-ending cycle of face-offs and skirmishes, especially in the cities of Tijuana and Ciudad Juárez, and states of Durango, Sinaloa, Guerrero, Chihuahua, Michoacán, Tamaulipas, and Nuevo León. 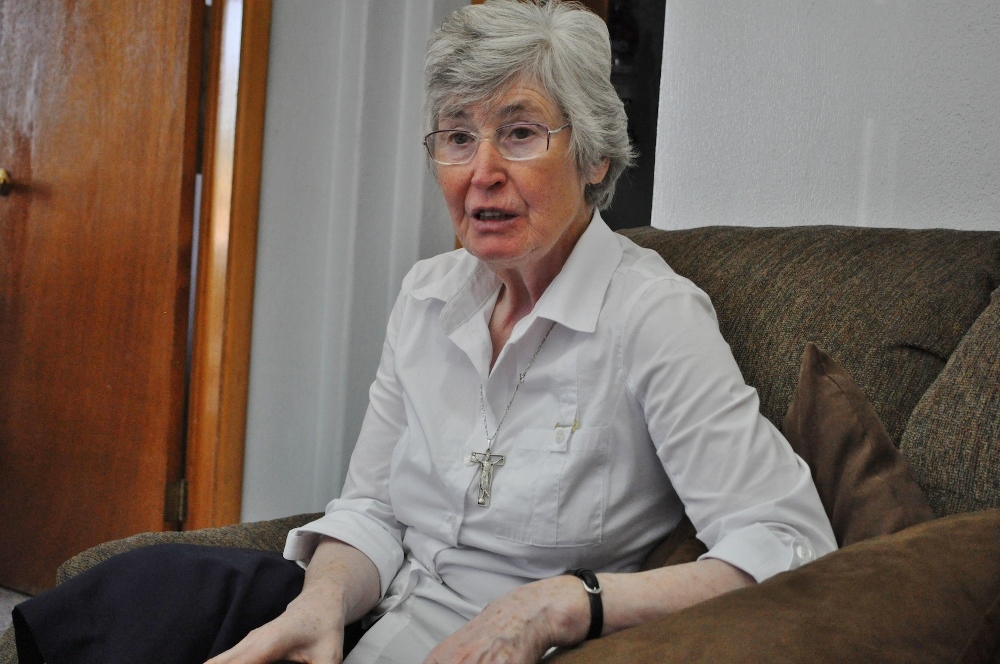 Last July in Iguala, Guerrero, 43 student teachers disappeared. Criminal gangs, along with some corrupt police officers, are thought to be behind their disappearance. Police forces struggle to keep organized crime groups and local gangs from preying on residents and threatening the employees of major multinationals with operations there, including the Coca-Cola Company and PepsiCo.

In January, the Mexican daily La Jornada reported that authorities recorded 324 homicides in Guerrero between October and December 2015 and accused drug cartels of being responsible for the murders.

"In Guerrero, families are being run out of their homes by violence and poor jobs," said Sr. Annette Tonial, 74, one of three sisters who works at the Instituto Madre Assunta alongside lay staff and volunteers.

Despite her age, Tonial said she remains very active at the institute. When she and Contini retire, other nuns with Missionnaires de San Carlos Borromeo Scalabrinians will replace them and continue their work. Work, Tonial said, that will never end until Mexicans find sustainable employment in their own country.

"The jobs in Mexico don't pay well, so they try to get to the United States," Tonial said. "The violence is horrible, but perhaps families could make do if their personal lives were not so desperate."

Maria Guadalupe traveled to the Institute Madre Assunta from her home in Istapas Guatanejo, Guerrero, last month with her 2-year-old son Umberto. She left Guerrero in part, she said, because of the murder of her cousin who was shot in the head. Police suggested robbery as the motive. But her cousin waited tables in a bar and worked around a lot of married men. Rumors spread that jealousy was the true motive. Whatever the reason, her death scared Guadalupe and her husband. Afraid to live by themselves, they moved in with his family.

"You can be walking and you'll find dead bodies on the street," Guadalupe, 21, recalled. "If you get close to houses, you hear gunshots. Close to where I lived I heard shots in bars and houses constantly."

But the living arrangement with her husband's family proved unworkable, she said. Her mother-in-law also had little patience for Umberto and would slap him when he made her angry. Guadalupe told her husband she wanted to leave. Friends suggested she seek asylum in the U.S. Her husband agreed. He told her it would be easier for her to cross into the U.S. as a single mother. He planned to follow her once her asylum application was approved and meet her and Umberto in America. 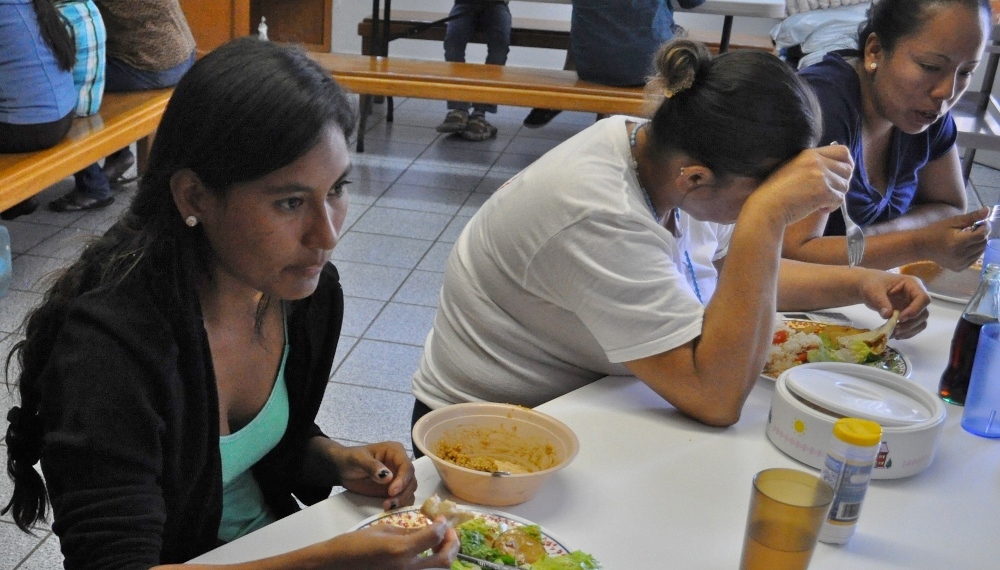 Twenty-one-year-old Maria Guadalupe eating lunch in the cafeteria of Instituto Madre Assunta. She tried to leave the violent Mexican state of Guerro but was turned back at the U.S. border. (GSR photo / J. Malcolm Garcia)

Guadalupe and Umberto took a bus on Feb. 18 to the San Ysidro-Tijuana border and turned herself in to U.S. border agents there. After four days of detention, she said, the agents denied her asylum request because she was not a specific target of gangs.

"I'll find a place to live here, call my husband and tell him to come here and stay," Guadalupe said from the institute. "There's no sense going back home. The town has a lot of death."

Although the institute serves only women and children, the sisters provide lunch for homeless men, many of whom had also left troubled areas of Mexico for what they hoped would be a new start in the U.S. For some, deportation put an end to those dreams.

"The deported, the ones used to working in the U.S., have a hard time when they return," said Contini. "They have a way of life, routine, family. Back here, they have to adapt, especially to the low wages.

According to the National Statistics Institute, 49.5 million Mexicans had a job in 2014. The minimum salary is 70.1 pesos, less than U.S. $5 per day. Many Mexicans deported from the United States, such as Heber Marin Velasquez, 28, from Vera Cruz, earned twice that per hour when they lived in the U.S. Velasquez worked as a landscaper in Riverside, California.

"I wanted to go to the U.S. because it was the land of opportunity as people say," he said as he stood in the food line outside Instituto Madre Assunta.

He'd lived in California since 2005 but was deported in February after being arrested for speeding. Now, back in Mexico, he intended to return to Vera Cruz rather than attempt to enter the U.S. again. He had no desire to live in Tijuana. Last year, the border city saw more than 100 murders between April 1 and May 31. Authorities attributed the murders to the city's street drug trade.

"Tijuana is dangerous," said Velasquez, "especially if people know you're not from here. I haven't been to Vera Cruz for nine years. I hope it's not bad, too. It will be hard enough to make a living there without having to face other problems."

Instituto Madre Assunta client Cecilia Luengas Hernandez, 19, has also decided to stay in Mexico after she failed to enter the U.S. last year. Like so many before her, she left Guerrero to escape the violence. The kidnappings and robberies frightened her. The disappeared student teachers only increased her fears. She was afraid to leave her house. Her friends stopped attending school. Shortly before she left, someone mugged her aunt and uncle.

Hernandez, her 20-year-old sister and 13-year-old cousin requested asylum at the Tijuana-San Ysidro border on Dec. 26. Hernandez said agents separated them. She asked to be released after three days. She did not like being alone in a small room with only a mat on the floor and wanted to return to Mexico.

The agents asked her if she felt safe returning to Mexico. She said she felt safe crossing back into Tijuana. She thinks now that by leaving, she may have waived her rights to a future asylum request. A Mexican police officer brought her to Instituto Madre Assunta. 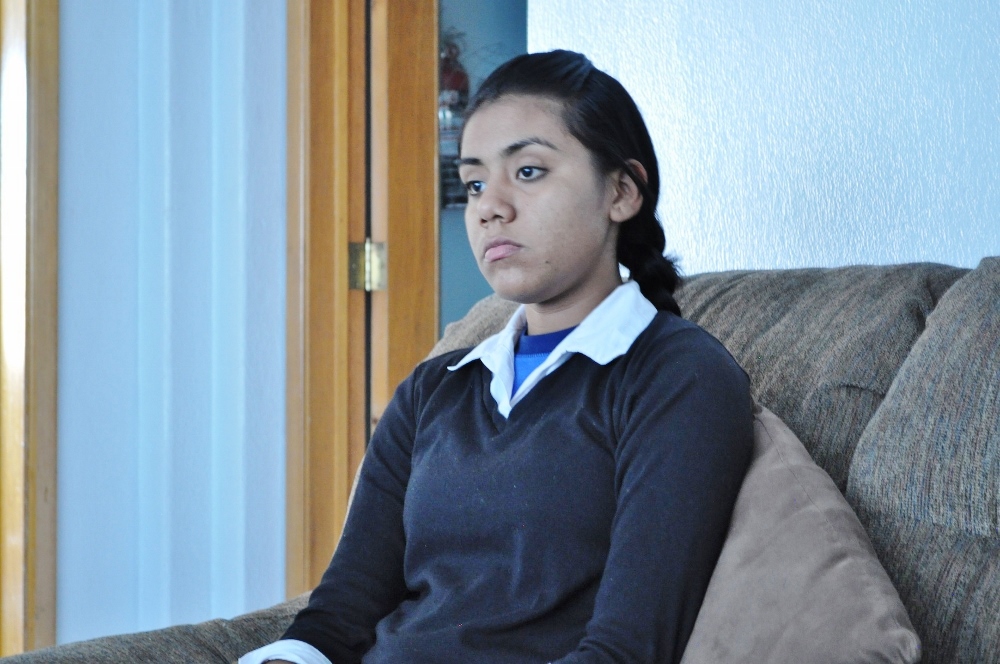 Instituto Madre Assunta client Cecilia Luengas Hernandez, 19, has decided to stay in Mexico after she failed to enter the U.S. last year. "It's not safe in my barrio," Hernandez said of her home in Guerrero. "But even if I'm scared, I have to return to where my family is." (GSR photo / J. Malcolm Garcia)

"It's not safe in my barrio," Hernandez said of her home in Guerrero. "But even if I'm scared, I have to return to where my family is. Where else other than the United States can I go?"

Contini said she often hears that question. She has no answers. She hears such tragic stories. Every day, she prays for strength to do her work. Sometimes she feels she accomplishes nothing. But then she realizes that her colleagues within the institute and elsewhere build on her work so that her efforts become part of a larger endeavor to relieve the suffering of so many poor and frightened women and children.

"No matter how discouraged we may feel," Contini said, "we have a commitment and a calling with God to keep working with migrants."

Read our immigration roundtable discussion with seven sisters working in the immigration ministry.

Sisters report on plight of asylum-seekers amid caravan headlines

A Christmas story at the border: Who are the holy families in your midst?