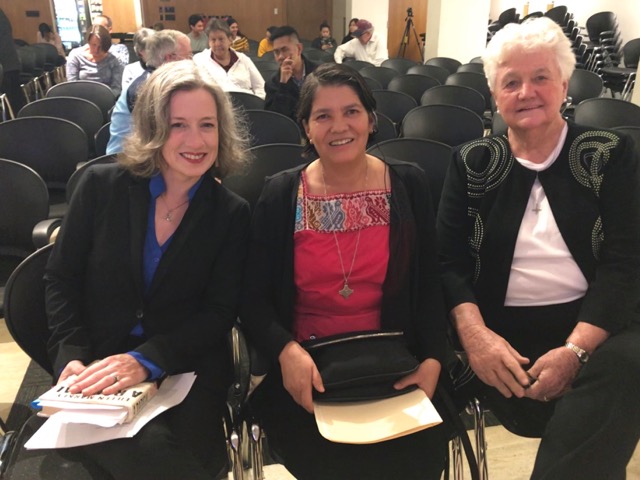 San Francisco, California — At an event on women in leadership that also served as a commemoration for Sr. Maura Clarke, who was killed in El Salvador in 1980, speakers noted similarities between U.S. policy during that country's civil war and current U.S. policies toward Latin American immigrants.

"Maura's story is the story of confronting tyranny," said Eileen Markey, the keynote speaker at Prophetic Leadership: Women Shaping the Catholic Social Tradition on Nov. 30 at the University of San Francisco.

"These are values we need to be reminded of today," continued Markey, author of A Radical Faith: The Assassination of Sister Maura. "We live now in dark times with an executive who traffics in lies."

Clarke, a Maryknoll sister, was killed Dec. 2, 1980, with Maryknoll Sr. Ita Ford, Ursuline Sr. Dorothy Kazel, and lay missionary Jean Donovan by members of the Salvadoran national guard. The four women had been documenting the regime's human rights abuses and supplying food and medicine to residents who opposed the regime.

Ronald Reagan, elected president weeks before the murders, supported the regime with military aid once he was in office. Markey said the current oppression of Latin America's poor is merely "crasser and uglier today than it was 30 years ago."

A slideshow of photographs of Clarke, from her first Communion to her time in Central America, played while the panelists — Markey, Sr. Cecilia Lopez Arias of the Missionary Sisters of the Eucharist, and Sr. Peggy O'Neill of the Sisters of Charity of St. Elizabeth — spoke at the annual event, which is sponsored by the university and the Ignatian Spiritual Life Center of St. Agnes Parish in San Francisco.

Through an interpreter, Arias spoke of the U.S. treatment of Mexican immigrants living in the country illegally. As the migrant aid coordinator of the Kino Border Initiative in Nogales, Mexico, Arias assists immigrants deported by the United States.

"We receive all the ones who come that are hurt physically, with blisters on their feet, with broken bones from beatings, who are psychologically hurt," Arias said. Kino provides the migrants with meals, medical aid and referrals to Mexican government services.

Through the interpreter, Arias told the story of Elena, whom U.S. authorities detained for living in the United States without documentation.

The 42-year-old mother from Guanajuato, Mexico, was arrested in March while riding a bicycle in Las Vegas. She was held in a detention center in Nevada City, California, where she slept on the floor. For three months, she wore the same clothes she was wearing when she was arrested. She had no news of her children or her partner, Felipe.

"They treated us as if we were criminals, murderers," Arias said Elena told her.

Eventually, Elena asked for voluntary deportation, which is how she ended up at Kino Border Initiative, which runs a shelter for women. There, Elena was able to find her family through social media.

"Elena is one of many women who arrive in Nogales with all these problems," Arias said. "Our mission is to promote migration policies at the border of the United States and Mexico so they respect the dignity of the people."

O'Neill said though the civil war is over in El Salvador, the wounds persist.

"At first, I taught and built schools," she said of her 25 years in El Salvador. "But then I realized we weren't paying attention to the pain the children were experiencing."

Remembering how music healed her as a child, O'Neill helped refashion a school abandoned by nuns during the war into an arts center. She is now the director of the Center for Arts and Peace in Suchitoto in El Salvador.

"You can't erase those war memories, but you can manage them," O'Neill said.

Clarke, she added, "will never be forgotten. She is presente: She is there. Her story still has energy."

Migration | 'We live in dark times': Panel sees history repeating itself in US policies toward immigrants

Prayer keeps award-winning nun centered amid all the hoopla

Q & A with Sr. Cypriana Lyu on becoming a refugee in Uganda with her whole parish

Walking with Juan and Sara changed my consecration