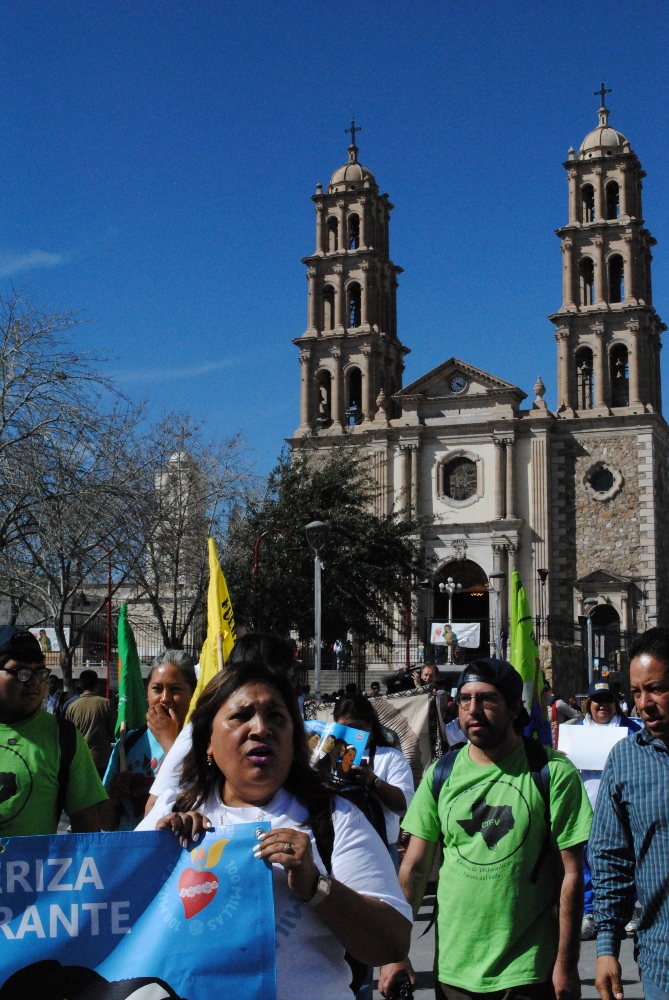 People gathered outside the Cathedral of Our Lady of Guadalupe in Juárez, Mexico, to draw the pope's attention to labor rights and immigration concerns. (GSR photo / Soli Salgado)

El Paso, Texas — Outside the Cathedral of Our Lady of Guadalupe in Juárez, Mexico, women passed around a microphone before a large group of spectators Feb. 16 to recount firsthand experiences with — or as — migrants and the labor movement.

"We are here representing the women who work in maquilas (manufacturing operations) in Juárez," said two women before the crowds, speaking Spanish. "We are few, but we are here to share our difficulties in our current working conditions.

"We have no labor rights. We make 98 pesos [U.S. $5] a day, despite working in the same place for 10 or 15 years. . . . We came from far away looking for a better life on the border, and, unfortunately, work in factories that exploit us. We want to ask you for help, so that we can experience a better life without having to leave our homeland and having to emigrate to another country, where people will look at us like strangers."

The original 100-Mile pilgrimage, organized by We Belong Together, which describes itself as a campaign to mobilize women in support of common sense immigration policies, began in September for the pope's visit to the United States. It lasted eight days as women walked from a Pennsylvania detention center to Washington, D.C., to greet Pope Francis. On Feb. 16 many reunited as about 40 women walked three miles carrying the same message as they crossed the bridge connecting El Paso, Texas, to Ciudad Juárez.

They gathered the day before Pope Francis is scheduled to visit Juarez and the border, where he will celebrate Mass and pray for victims of violence, the last stop on his visit to Mexico.

"We came here once before to draw attention to the pope because he keeps bringing that message of humanity and we thought it was important to support and affirm that, but also to challenge him to invite the world to see children of the border and children that are being harmed," said Wendy von Corter, a Unitarian parish minister from Marblehead, Massachusetts, who has been involved in immigration issues for years.

One reason this pilgrimage had fewer attendees as September's 100-mile journey was because those who had participated in D.C. who are undocumented, were unable to cross the border into Mexican territory.

Some from afar sent messages of support. "We send our love and thanks for all that you are doing on the border," wrote Claudia Reyes from San Francisco to the 100-Mile group. "You're going where many dreams begin, but where many end, as well. There's a lot of work that still needs to be done, but we heard the pope's message in September, and I am hopeful that his message of peace and love will be heard again." 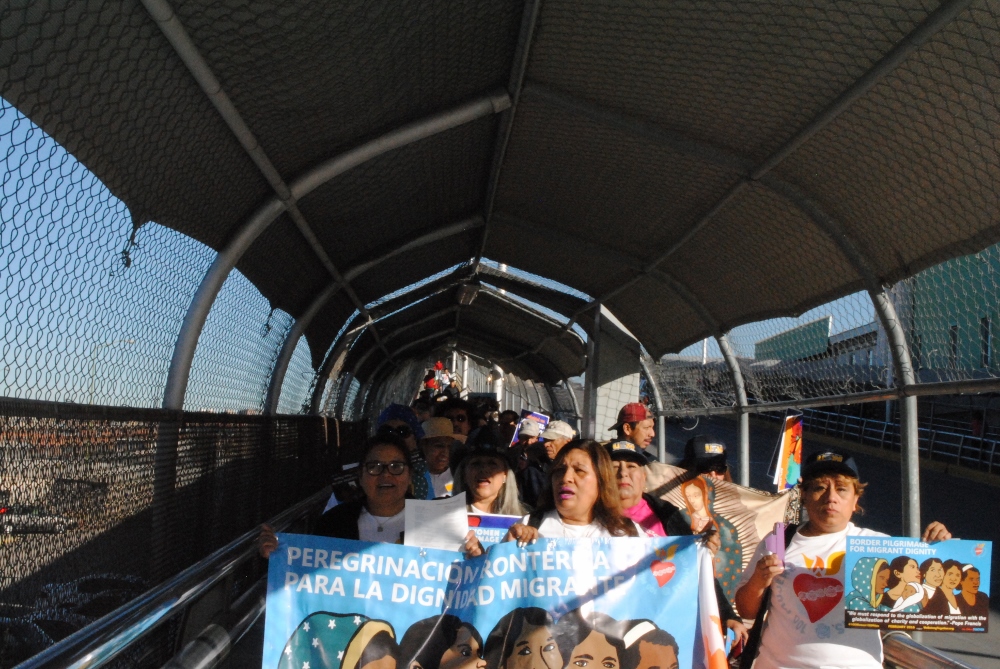 While the trek was an act of solidarity with undocumented immigrants, the plight of women was at the forefront, particularly mothers and domestic workers.

Wage theft, sexual abuse and lack of health coverage are often encountered by domestic workers who are unable to seek redress because of their legal status, said Maria Elena Durazo, vice president of immigration, civil rights and diversity at UNITE-HERE, a union representing hospitality industry and other workers.

Housekeepers at hotels, for example, are sometimes threatened with providing sexual favors, Durazo said, or are assaulted on the job by guests. If the housekeeper has the courage to report the incident to the administration, her boss will most often side with the guest.

"But once the housekeepers collectively get together, they're very strong," said Durazo, who was born in the U.S. but is of Mexican descent. "They have that sense of community, of family, of fighting for their kids. I feel very much connected to the women and actions taken by immigrant women, because we're the same. They're just working in different industries.

"And, really, what's the difference between women on this side of the border and that side?" she said after just having crossed the bridge in Juárez with the pilgrimage.

"Whether in the US or Mexico, we pray the same rosary." -Sandra Torres from San Antonio #100Women100Miles pic.twitter.com/7DzYtRUHlN

The difference can sometimes lie in the visa.

Women who live in Juárez but cross into El Paso for work can do so a couple ways: through a visa that allows them to cross but not work — such as one for tourists, though often used by workers, or a guest-worker visa, which allows them to work in the U.S. legally, but with strings attached.

"It's not a visa to go work for your best opportunity — it's one where you're completely chained to a specific company or employer," Durazo said. "And that employer knows he has complete control over you. He can pay you, he can not pay you, or pay you half of what he committed to pay under the agreement. He can provide healthcare, or not. So the abuses are far greater, even though you have a written agreement."

"The only thing we really have is community — maybe being backed by churches, or elected officials, though those are few and far between."

"This walk should bring awareness to the power that we could have, so that women on both sides of the border realize they can do something about their circumstances, rather than be dictated by them. . . . I hope this it's inspirational enough so that they start doing more, do something that they've never done before, or feel strengthened to keep on going even when they think they're not winning." 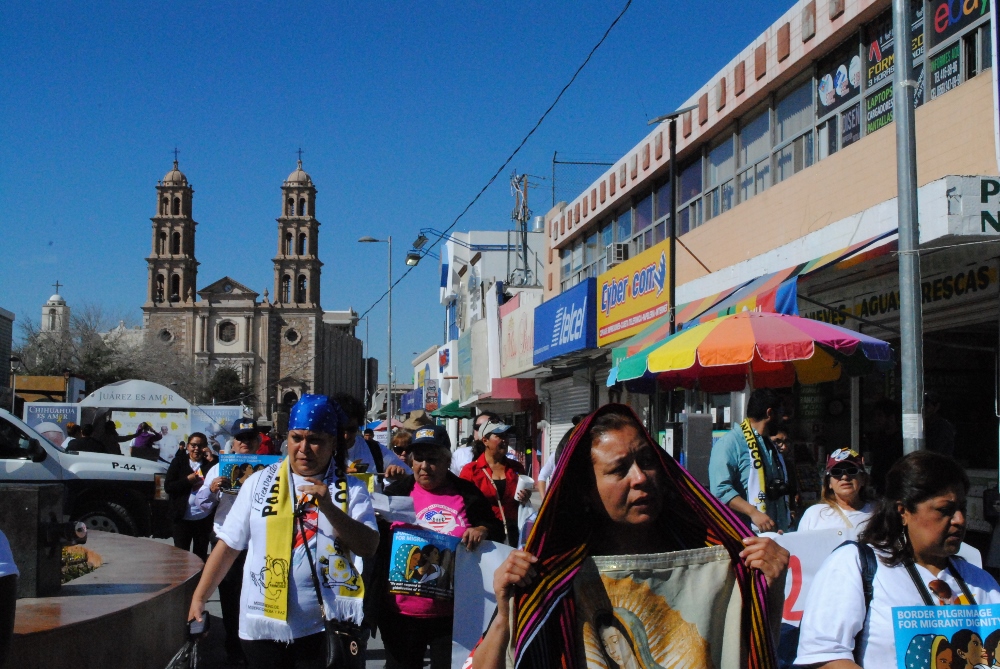 Outside the cathedral, Juana Flores — co-director of Mujeres Unidas y Activas (MUA), a domestic worker movement — took the microphone, standing before spectators and the group of women marchers, who were holding colorful banners and had been chanting between speeches for hours.

"Why am I on this pilgrimage? I am an immigrant woman, and I know, in the flesh, what it's like to cross that border — the pain one feels in your soul and heart to leave your family, roots and town."

"Many nights, I wake up out of fear that I would be deported or that my children would be left in the U.S. I would cry all the time imagining this scenario," she said, despite having obtained legal status living in San Francisco, California. "But today I am representing the many women who share my story, who feel the pain of being an immigrant or having been abused."

In an interview with GSR she shared that as a child she had been sexually abused — a trauma she grew up internalizing, feeling guilt, shame, and fear of judgment. After emigrating to the U.S. from Oaxaca, Mexico, she suffered domestic violence at home, and was also abused at her job as a housekeeper. Her employer (who paid her $35 a week) would constantly threaten to turn her in to immigration control, warning her that she and her children could be killed or raped in the process.

"I didn't realize this was abuse — I always blamed myself or felt shame, until I found this organization [MUA]," said Flores, who was a nun from ages 15 to 25 before leaving the Capuchin order and starting a family.

"All I needed to do was talk about it, rather than internalize everything I felt ashamed of, or the fear of what people would think. I felt heard and discovered my strength. I share this story because, 25 years after joining MUA, I see women continue to go through the same thing."

As the microphone continued to circulate, Consuelo Martinez shared her story of multiple deportations, having crossed the river through Reynosa, Tamaulipas, three separate times in search of a better life. A single mother of four, she found herself separated from her children for 10 years after her last deportation.

"They were ripped away from me. I prayed to God to be reunited with my children, and here I am. I won't be quiet. We didn't come to the U.S. to ask for anything. We come to the U.S. to work. . . . We are part of the nation's growth. No human being is worthless or disposable, like they might make us feel. And I know that if we unite, we will accomplish something." 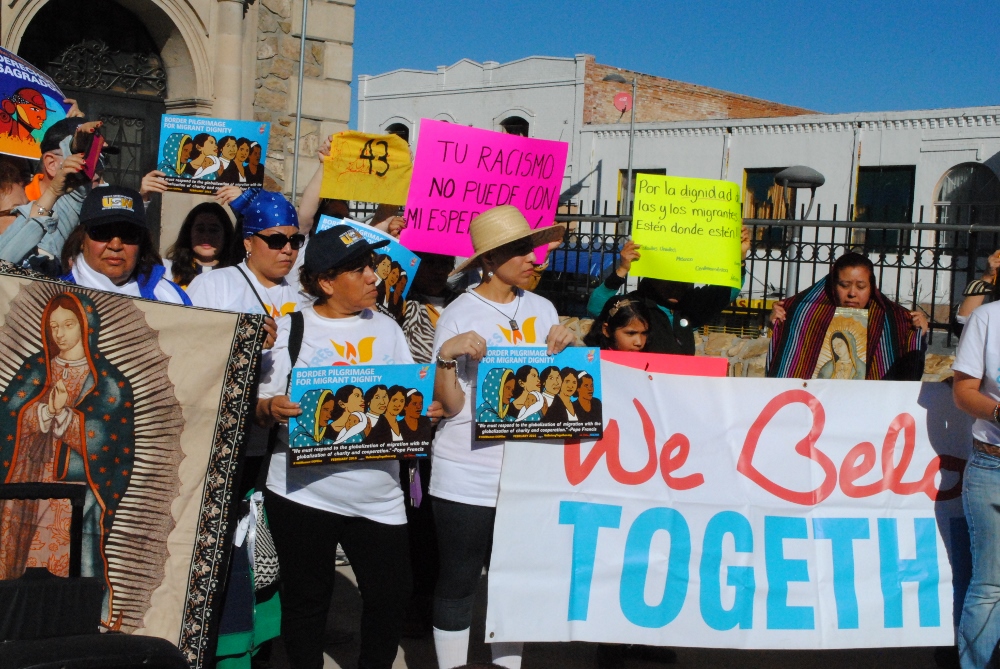 Marchers gathered outside of the cathedral. (GSR photo / Soli Salgado)

Crossing the border alongside this group of women, Fr. Clete Kiley came from Chicago to join 100 Women 100 Miles. Because he does a lot of work with hotel and restaurant worker-unions, he decided to make the commitment and highlight "the plight of folks who come across the border just to go to work."

"The fact that the Holy Father is coming here is such a comfort," he said. "That he insists to come to this borderland is bold, and inspires confidence and hope in people who feel pretty fragile as they make a decision to leave [their homes] and go [to the U.S.]. And what they encounter there — well, life is not easy. So there was a real eagerness to be here."

"This is holy ground, if he's going to touch it. But the sacrifices of the people who have crossed that bridge have already made it holy ground."

Straying from the church and grounding my faith in nature

Mother nature is my healer

Growth and life along the US-Mexico border

Q & A with Sr. Rosemary Nicholson, ministering to migrant children at the Tijuana border