In the dry season, Juja is hot, windy and dusty. Vegetation is completely brown, and the sun beats down overhead during the annual drought from December to March. But step inside the Dominican Missionary Sisters of the Sacred Heart's greenhouses and life is very different. The fresh smell of vegetables replaces the dust outside. Mouthwatering tomatoes, healthy and red, hang on the branches, while outside, plants wither and die. It is so green and cool in the greenhouses that you quickly forget about the scorching sun.

In Kenya, farmers have traditionally chosen not to farm arid and semiarid lands like those in Juja, a town in the Nairobi metropolitan area, due to the difficulties in raising crops. But religious sisters are proving that, with some initial financial support, the nation can be fed by farming the less popular land.

The key is the greenhouse, where sisters can control a harsh environment to grow high-yield crops on a small footprint of land.

These sisters are using innovative farming methods to combat poverty and to create jobs for struggling youth, by planting vegetables atop land previously considered dry and infertile. The sisters prefer using the greenhouses because they can reduce the sharp variation of outdoor temperatures, control rainfall and keep the plants safe from the devastation of insects, rodents and other animals in the wild.

By using greenhouses, the Dimesse Sisters (Daughters of Mary Immaculate) in a Nairobi suburb and the Dominican Missionary Sisters of the Sacred Heart in Juja are now able to produce vegetables for both income generation and food consumption in their communities. They share this farming knowledge and skill with the children in their care, the novices who will become future leaders, and the community members surrounding their convents.

Dominica Mwila, a Dominican Missionary Sister of the Sacred Heart, learned farming at her home in Zambia, where her father was a district agricultural officer in the federal government. Upon her 2014 appointment to direct St. Dominic's Technical and Agricultural Training Institute in Juja, less than 20 miles north of Nairobi, she decided to replicate what she had learned from her father.

St. Dominic's, known as TATI, is a project the Dominican sisters started in 2013. They live in a convent in St. Augustine Parish, about 2 miles from the school and greenhouses.

Few people in Juja practice farming, due to poor soil fertility, irregular rainfall patterns and inadequate water. Traditionally, the people around Juja occasionally have grown sisal (a plant that produces long, green leaves with natural fiber used for making rope and twine) because it is drought-resistant, or maize for their own consumption. They are forced to purchase the rest of their vegetables.

The training institute is a school for older students who have difficulty paying for secondary school and younger students who are orphans and refugees. When the sisters first built six greenhouses there, nothing was growing, due to bacteria that caused wilt disease, a common problem in Kenyan greenhouses that is traced to high humidity. When Mwila took over management in 2014, she decided to research what could grow well on their farm and how to improve the soil fertility.

"Nothing was doing well in the greenhouses so we decided to contract some people to bring us [uninfected] red soil and manure from the locality," she said. "After this, we planted tomatoes but before the fruits could mature, they started wilting again due to bacterial infection."

Because the problem was so persistent, Mwila decided to consult with the Jomo Kenyatta University of Agriculture and Technology, situated a couple miles from St. Dominic's institute. She also engaged other specialists in horticulture, who introduced the sisters to grafted tomatoes that are disease-resistant.

"We were given the seedlings, and we are happy that we can now produce healthy tomatoes in our greenhouses and share the knowledge with the community members by inviting them to our greenhouses to see the farm progress and borrow our ideas, since they had the same soil problem," she said.

By selling milk, eggs and chickens produced on other parts of the institute's farm, Mwila raised $6,480 to buy 54 tons of wilt-free red soil to fill in the six greenhouses. She is hopeful that the pepper and tomato plants will help them recoup their investment in the future.

"Now we are doing selective harvesting, whereby we do not pick all the ripe tomatoes at once," said Mwila.

Generally, commercial farms harvest everything from a greenhouse at the same time to minimize labor costs and maximize profit, but the sisters are not using that tactic. "We want the community members to come and see how the mature tomatoes are and learn from us. We do not want to be selfish," she said.

The soil hasn't been the only challenge, said Mwila. They also suffered from strong winds that ripped off one of the greenhouse roofs, but through a Rotary Club in Germany and a local flower company known as Selecta, the roof was repaired. They had no running water for two and a half years due to scanty rains that could not fill the borehole the institute had dug. Even though today the borehole has water, some of the drip irrigation to the greenhouses and garden is blocked and needs to be replaced, she said.

Three years after Mwila took over at Juja, the sisters now sell to the local community and the supermarkets in the area because they produce more than they can consume. This surplus pays the salaries of the farmworkers and tutors at the training institute. The tomatoes are selling at a dollar per kilogram, and they harvested more than 700 kilograms in January alone. The neighbors happily buy from the sisters because this represents a new market for Juja. Previously, the nearest market was a 2-mile walk away.

The sisters also use the farm produce to feed the 80-100 children coming from a nearby slum who live full-time at the institute's dormitory.

However, Mwila believes that, in order to break even on their investment, the sisters need an additional five greenhouses, at a cost of $2,500 to $3,000 each, to increase vegetable production. They will also need to fill the greenhouses with new soil.

Apart from growing tomatoes and peppers in the greenhouses, the sisters have also planted maize, onions and cabbages. They have 20 dairy cows for milk, more than 4,000 chickens for eggs and meat, and plan to open a fishpond and goat shed soon.

Growing their way to feed and employ those made poor

The Dimesse Sisters in Karen, a suburb of Nairobi, are another example of how sisters who began farming for domestic consumption have now gone commercial.

Farm project manager Sr. Eva Atieno said the sisters began the farming project two years ago with dairy farming. Later, they did an extensive market survey, and found that since they are located in the city, the demand for pepper, tomatoes, broccoli and eggplants is high. The Pontifical Missionary Society of the Kenya Conference of Catholic Bishops gave them a $36,000 loan*, and the Dimesse Sisters decided to venture into greenhouse farming.

"The best knowledge you can give to the poor is to teach them work in order to get food for themselves, and these young sisters will be able to do just that," she said.

Atieno also said that the sisters realized they should put their available land to work, to address issues of food insecurity and malnutrition in the communities around their convent.

At their orphanage in Laikipia, 125 miles from Nairobi, the Dimesse Sisters care for 86 orphans, as young as 1 year old, "infected and affected" by HIV/AIDS and the rejection that goes with it, Atieno said. "They depend on us entirely in terms of food, shelter, medication and education until they become adults. So we saw the great need to have an income-generating activity since the support we get from well-wishers is not enough."

Atieno said the farm also helps orphaned and vulnerable children integrate back into the society after they graduate from secondary school. Because they are equipped with skills and knowledge in farming and other courses, they have a foundation to start their own projects. The income from the greenhouses pays for the young adults to pursue other fields, she added, "because not everyone is interested in farming."

In addition to the center for people with HIV/AIDS, the Dimesse Sisters also run a retreat center, where they host 300-350 guests every week. The center has cut its expenditure on food by 65 percent since they started growing their own vegetables in the greenhouses.

Most of the workers at the Dimesse Sisters' farm come from a nearby slum called Kalinde. The sisters are committed to training them in innovative farming, even though the students cannot pay for the education, said Atieno. The sisters hope the new skills will enable them to support their families, avoid the lure of criminal activity and spread their new knowledge to others. And, with a new steady income, many of the workers have been able to move away from their shanty houses in the slums, where there is poor sanitation, lack of water and poor lighting.

Atieno said that, by sharing farming knowledge with the local youth, the sisters have helped them to be self-reliant and to replicate this attitude within their communities.

The sisters' main challenge is to find the right people for the right job, because farmers need passion in order to succeed, Atieno said, adding that employing unskilled people from impoverished urban conditions can be difficult in the beginning.

Both the Dimesse Sisters in Nairobi and Dominican Missionary Sisters of the Sacred Heart in Juja encourage the trainees to take the knowledge and skills they acquire in greenhouse farming and start their own projects. "Self-sustainability is a tough and challenging affair, but venturing into greenhouse farming is one way to ensure we have food and money," said Mwila.

As she gives a tour of the greenhouses, she can't hide her joy as she picks tomatoes and full-grown peppers to show visitors. Though the greenhouses seem small, the vegetables inside take up every available inch. Tomato and pepper plants reach up toward the ceiling, requiring support from extra strings to contain their overwhelming bounty.

Mwila said the farmers, government agricultural workers and experts from Jomo Kenyatta University who witnessed the sisters' frustrations now rejoice with them. "They said, sisters, you have worked miracles from here; this place was absolutely dry like a desert," Mwila recalled.

"It is just incredible to see this because we have seen this place from the beginning — it was dry and there was not even a single tree here," she said. "Even me, I stand in the garden and marvel that it is possible that this place can be productive."

*An earlier version of this story incorrectly stated in what form the money was given. 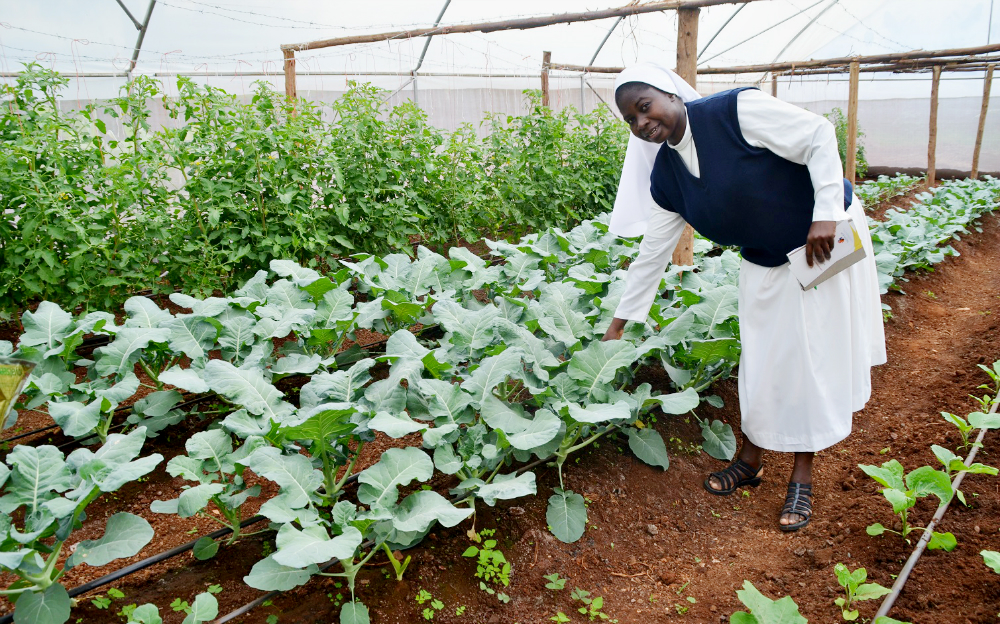 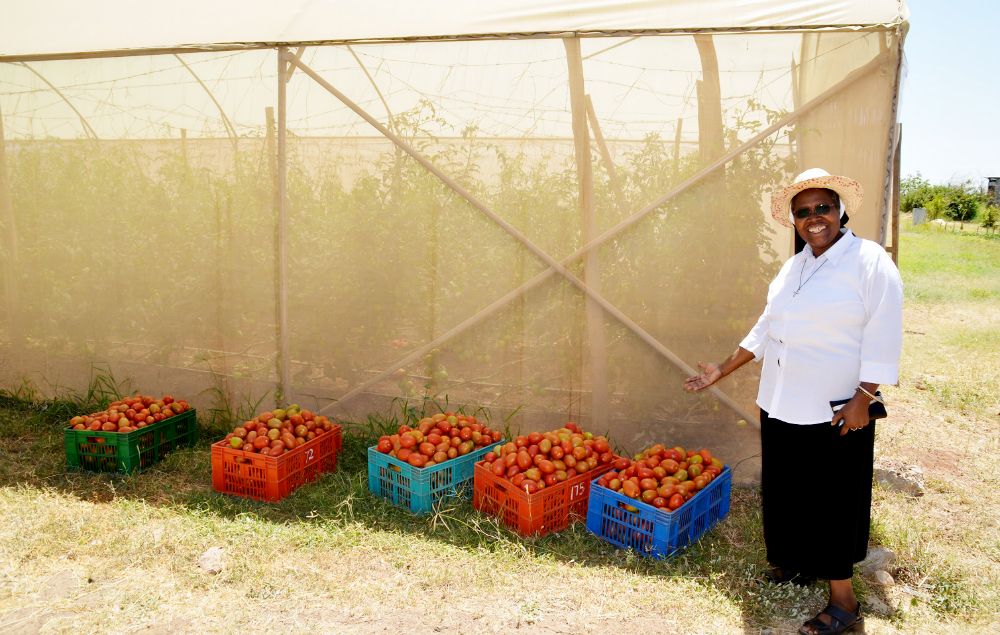 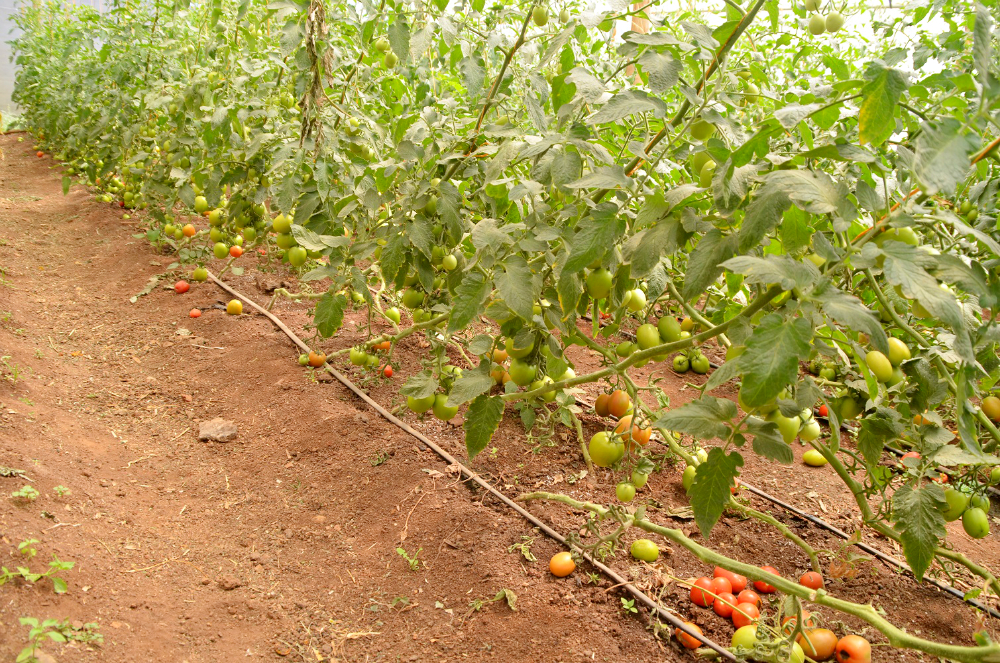 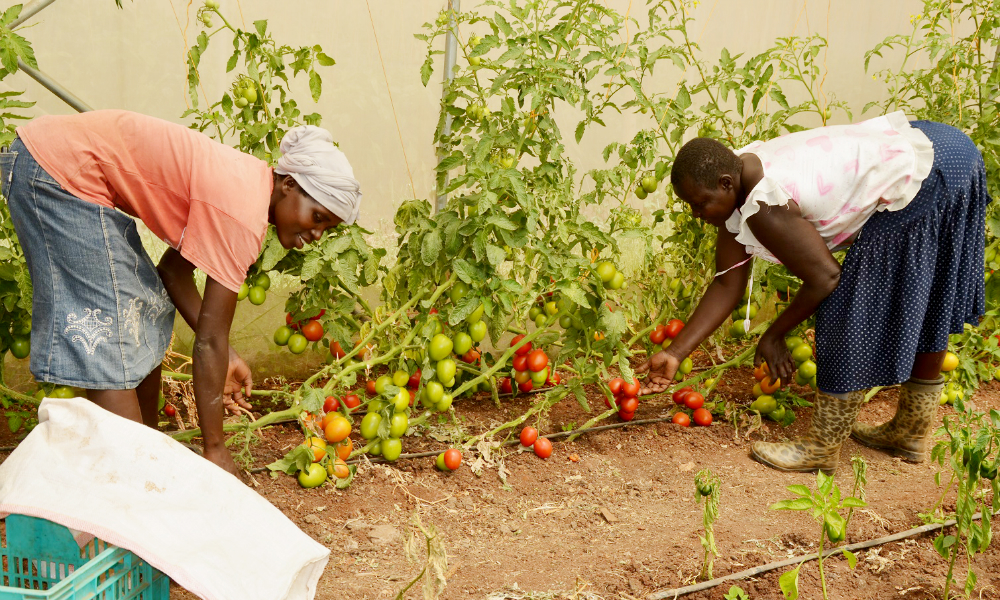 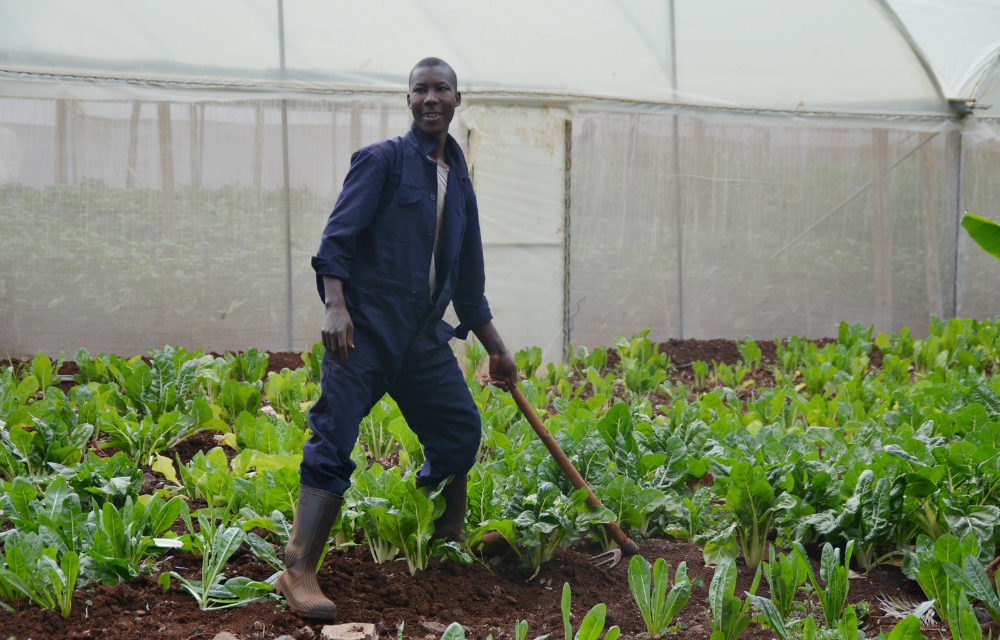 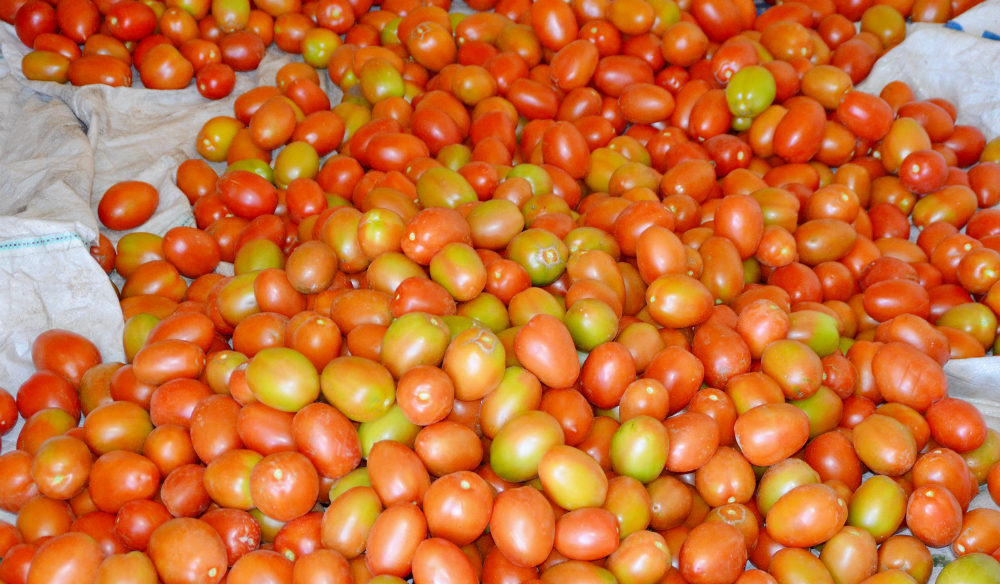 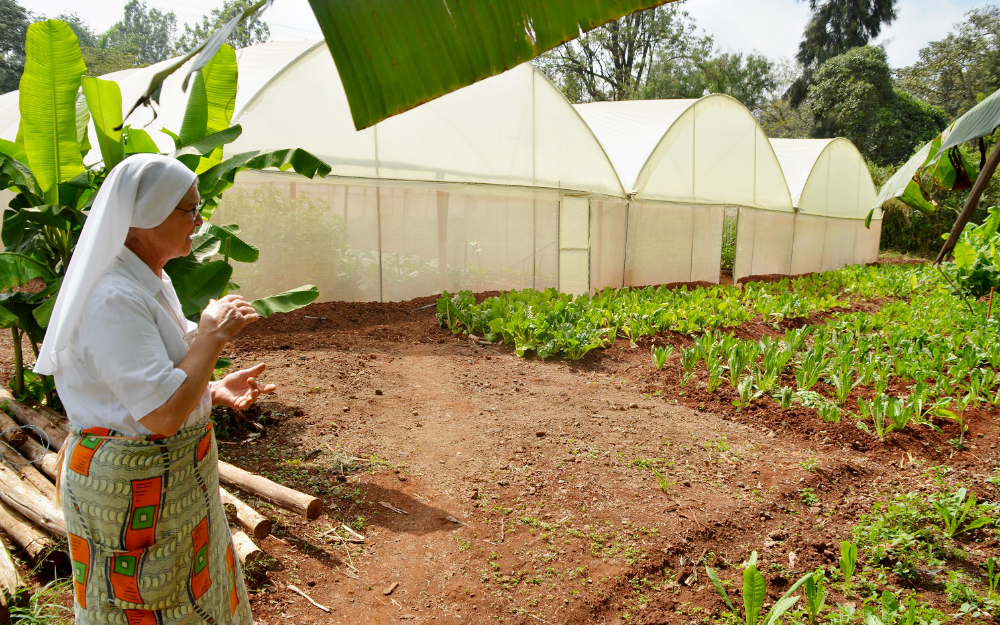 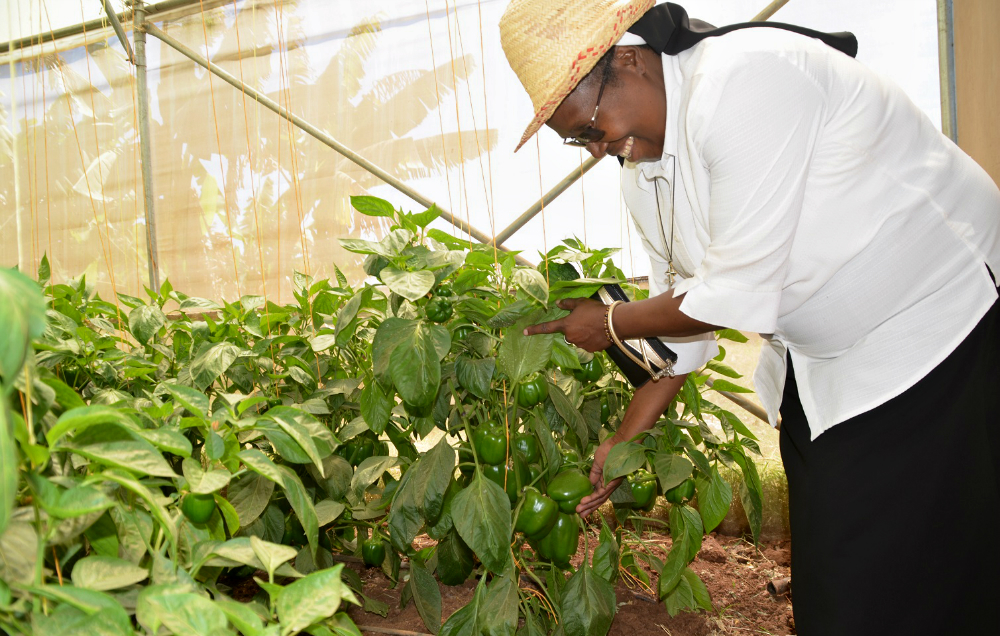