In Guatemala City's colonias, the underprivileged settlements where factory and construction workers make up most of the population, the clinic Sr. Sarah Mulligan runs is a one-stop shop in Villa Victoria for services many locals otherwise can't afford.

Clínica Daniel Comboni is a colorful two-story building that offers medical and social services to anyone who wants them. Here, dental services cost roughly a fifth of what they typically run outside the clinic. Women can take courses geared toward self-empowerment, and kids are offered supplementary education and nutrition.

Of the clinic's 45,000 registered patients, Mulligan, a Sister of Charity of Cincinnati who arrived in Guatemala 20 years ago, has a particular fondness for one woman: an illiterate mother with an alcoholic husband who sends her five children to the clinic without fail to all their courses.

"We hold her as an example of what we love in mothers," she said. "Despite her husband and despite her education, she insists on more for her kids."

In 1993, Mulligan, a trained nurse, read in the Cincinnati Archdiocese's monthly newspaper about Comboni Fr. Bill Jansen, a fellow Ohioan who was assigned to a parish in Villa Victoria. While fundraising to expand his chapel into a church, he learned from locals that they especially needed a clinic, so he secured the funds for both.

Thinking her clinical experience might be helpful to his mission, Mulligan reached out to Jansen. He invited her to join him in Guatemala, where they finished construction plans a couple of years after her arrival, and the clinic, named for Comboni Fathers founder Daniel Comboni, opened in 1998. Jansen stayed about another six years after the clinic opened then returned to Cincinnati to retire. He died in 2016.

"I came for a few years to help it get started," Mulligan said. "And here I am still today," celebrating the clinic's 20th anniversary.

When she moved to Villa Victoria, there was no public health in the area, she said. The space began small, intended for a pharmacy and lab work plus a couple of volunteers and one doctor. But need kept driving more people in, and eventually, the clinic and its staff became fully licensed. Today, the clinic has three doctors, two nurses and 27 employees.

For 25 quetzals per visit (a little over $3), locals can see a doctor, and grants, donations and raffles the clinic hosts cover the remaining costs. The quality of care is so high and consistent that people of all income levels are drawn to the clinic.

"When I first came, I wanted [locals] to be responsible for all the patient care and services," Mulligan said. "What I've tried to do is support the staff — they all have the education — but I try to see how they do it here, to do it their way but offer whatever experience I have."

One of the first social programs to emerge at Clínica Daniel Comboni was a women's empowerment program in 1999 that snowballed into more programs and formal workshops when the staff learned that the women attending the program didn't even know how to sign their names.

The clinic started with an educational program for people of all ages that ran through sixth grade, then expanded to offer junior and high school education with the collaboration of two board members who run private schools. Now, 200 men and women study at Clínica Daniel Comboni on the weekends.

The clinic also communicates with the local schools the children attend full-time so the lesson plans complement one another, one of the advantages to participating in the clinic's classes, said Vicki Orrego, who works with children at the clinic, offering services in psychopedagogy, the practice that combines psychology and pedagogy. She said her students, who are split into four groups of about 25 children each, mainly have speech problems and self-esteem issues, the latter of which she refers to the psychologist.

Often the children only have one parent, live with their grandparents, are orphans, or have an alcoholic or absent parent.

"The more I work with them, the more I figure out their root problems," she said.

One set of siblings, ages 7, 6, 5 and 3, lost their mother two years ago to bone cancer and since then have been living in "awful conditions" — anemic and covered in lice — with their grandparents, Orrego said. Every day, staff members pick them up, watch them all day, and drop them back off at their grandparents', encouraging them to let the children be adopted by the many couples willing to take in all four.

"We try to tell them that if the kids are discovered in that house, social workers could come and put those kids anywhere. We have all hands on deck to help those kids," she said.

The children's grandmother is "not psychologically capable of watching after the young kids" and tried visiting the clinic's psychologist, Orrego said. But like many women who come to the clinic for psychology services, her husband's misogyny kept her from attending more sessions.

"He said, 'If you see the psychologist, I'm kicking you out of the house,' " Orrego said. "That's fairly common."

Mulligan also recalled one man who told her that only his sons needed to study, as his daughter would just get married and have a family.

Clínica Daniel Comboni regularly hosts talks and lectures on self-esteem, domestic abuse and women's rights. Orrego said often, young married women who attend the talks react as though they shouldn't hear information on those topics. Some husbands don't allow their wives to go back.

In response, Orrego said the clinic changed its methodology, teaching women skills to make crafts they could one day sell to become more financially independent and leave their husbands if they desire.

"Sometimes the misogyny and violence that the women suffer within their family can keep them from fully expressing themselves at first," said Abigal Hernandez, a nurse at the clinic. "But after some formation, and as they learn and explore topics and begin to trust one another, they open up and ask for help. They tell us what they're going through and what they want for their kids. Friendship is what allows them to open up and share."

Another approach toward empowering local women is through the family support program, which was created "to motivate moms, educate them, and help generate changes within their family that will then change the community," said Hernandez, who helps run that program.

Meetings are once a month, and while the program is intended for mothers, they split into groups depending on their situation: mothers with kids younger than 13, pregnant women, those who have special-needs children, etc. Each meeting lasts about two hours and is guided by a specific topic for that month, such as communication with kids or between couples, prenatal health, or educational courses. All leave with a bag of basic groceries, including flour, sugar and rice.

"It's small, but it contributes to their peace of mind in small ways," Hernandez said.

Another group is for senior citizens.

"It's the most joyous group, the most participatory, the most punctual, the most collaborative, the most persistent, the kindest," Hernandez said.

Some meetings for the senior citizens revolve around physical health awareness, with eye exams and measuring blood pressure; others are more focused on activities, such as learning to embroider. The group also takes a field trip once a year — this year, they went to a railway museum — and they leave with a bag of supplements after every meeting, too.

"It's a form of them escaping their problems for a bit, their illnesses or their pains, when they laugh and share with each other," Hernandez said. "You see that at least in that moment, they're quite happy and relaxed."

Most live alone or are frail or ill, and depend on the clinic for medications and consultations.

By working at the clinic, "we learn to value each individual and their experiences, and they inspire each other by sharing their individual experiences," Hernandez said. "I learn something new every day. There's sincere friendship with these programs."

The clinic is one of the few places in Guatemala that provides chispudos, a soy- or corn-based porridge developed by the Mathile Institute that contains 21 vitamins and minerals. Passionist Sr. Felipa Gomez oversees this program, which provides the supplemental nutrition to children between 6 months and 6 years old who are underweight or malnourished.

"Today, I registered a 2-year-old who looks younger than 1; he's anemic and malnourished, and if through this work, that kid gets stronger and healthier, that's where I see the Holy Spirit," said Gomez, who first offered to help Mulligan at the clinic in 2010.

With the chispudos program, kids are given the porridge three times a week and are weighed monthly. Every year, up to 200 children are enrolled in the program.

Beyond addressing children's nutritional needs, the clinic conducts socioeconomic studies and house visits to assess what a family's general needs are, Gomez said. She recalled Mulligan saying, "What good is giving them monthly donations if they can't read?" which kicked off book drives and the sponsoring of 35 kids who receive a monthly allowance from donations and grants for school supplies they otherwise can't afford.

The clinic also offers smaller daily services, like driving kids to their extracurricular activities if parents can't afford transportation. In exchange for the help, parents agree to participate in one of the clinic's programs, such as one on recycling, "so they can value what they've been given," Mulligan said.

But the help isn't always met halfway, she added.

She said one particularly memorable situation involved an unemployed 32-year-old mother with six children — her oldest daughter was 13 and pregnant at the time — and three grandkids. Her children and grandchildren didn't have birth certificates, so the clinic offered to help in that process.

After clinic staff members registered her children and grandchildren for classes and day care and helped them obtain proper paperwork and identification, the mother neglected to show up at her appointments and pick up the papers, leaving the clinic to cover overdue fees. Orrego said they offered her psychology sessions, but she refused that, too.

Staffers at the clinic decided enough was enough and stopped providing help to the woman's family.

"That's so hard, but she has to do her part," Mulligan said.

She recalled another mother with four kids, the oldest with special needs. The mother kept signing them up for courses and pulling them out shortly after, despite Mulligan's recommendation to keep them in school.

"A few years later, she said to me, 'I should've listened to you.' And I thought, 'That's OK, we can still support them.'

"I have an idea of what's good for the family, but I've also learned to respect the decisions, and it's not the same decision I would make, but I've learned that that's OK and that it's a learning experience. We still continue supporting them." 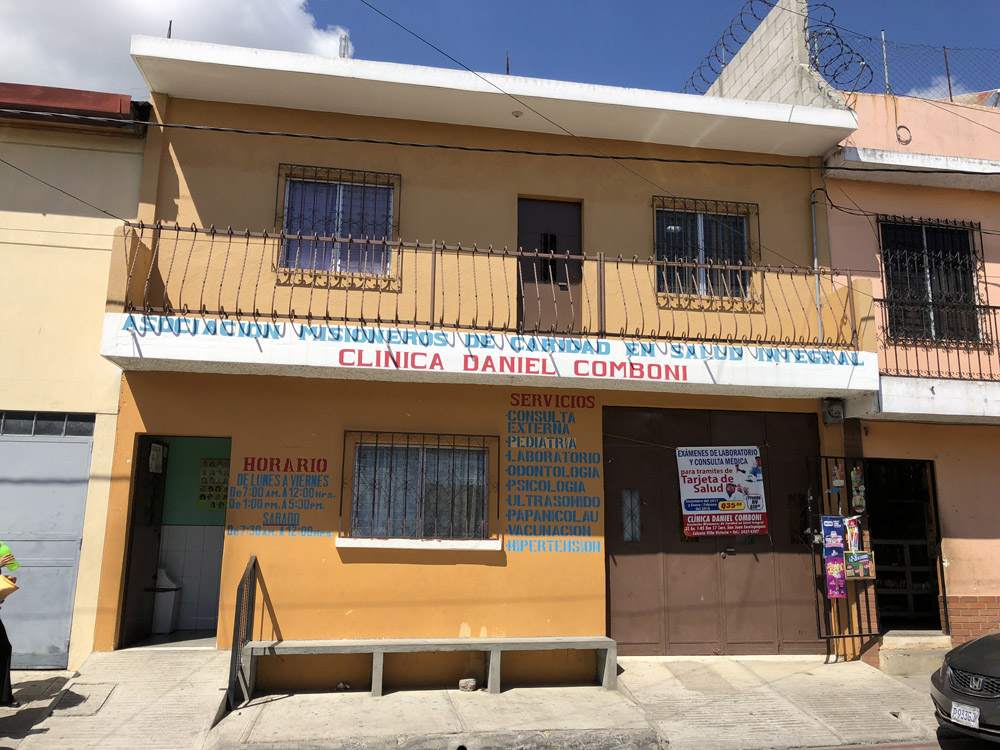 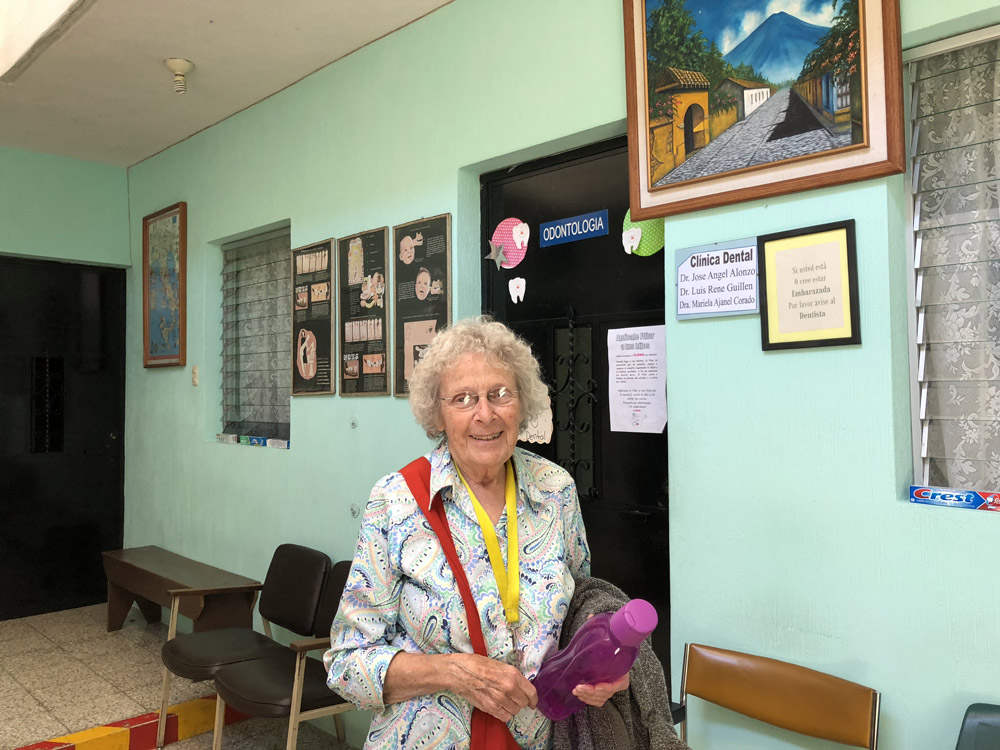 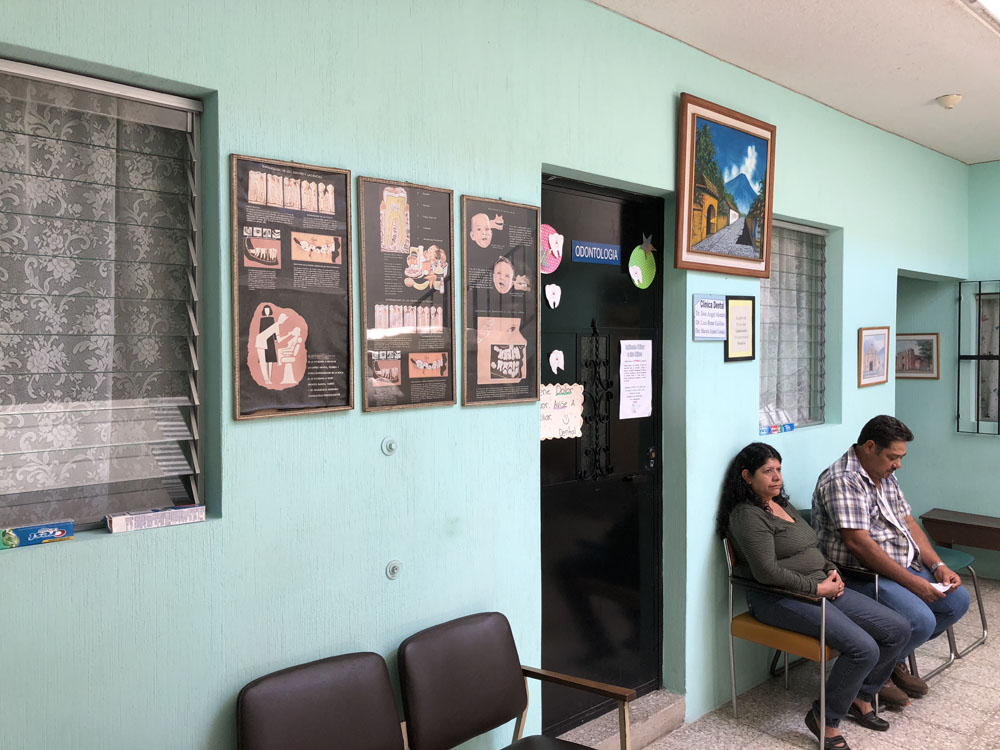 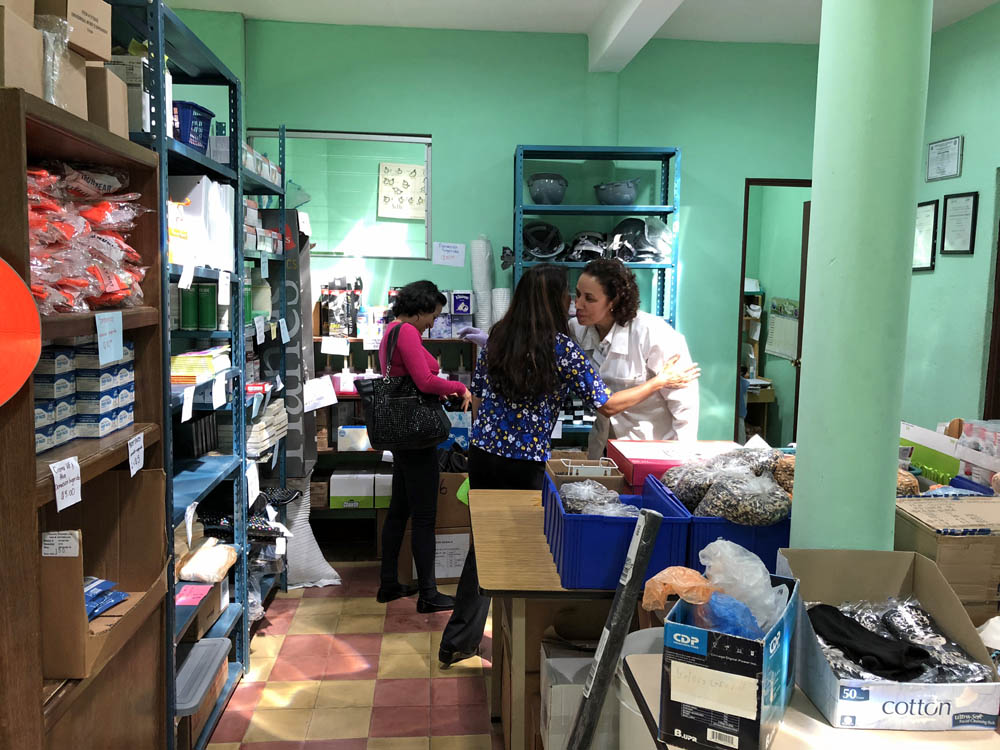 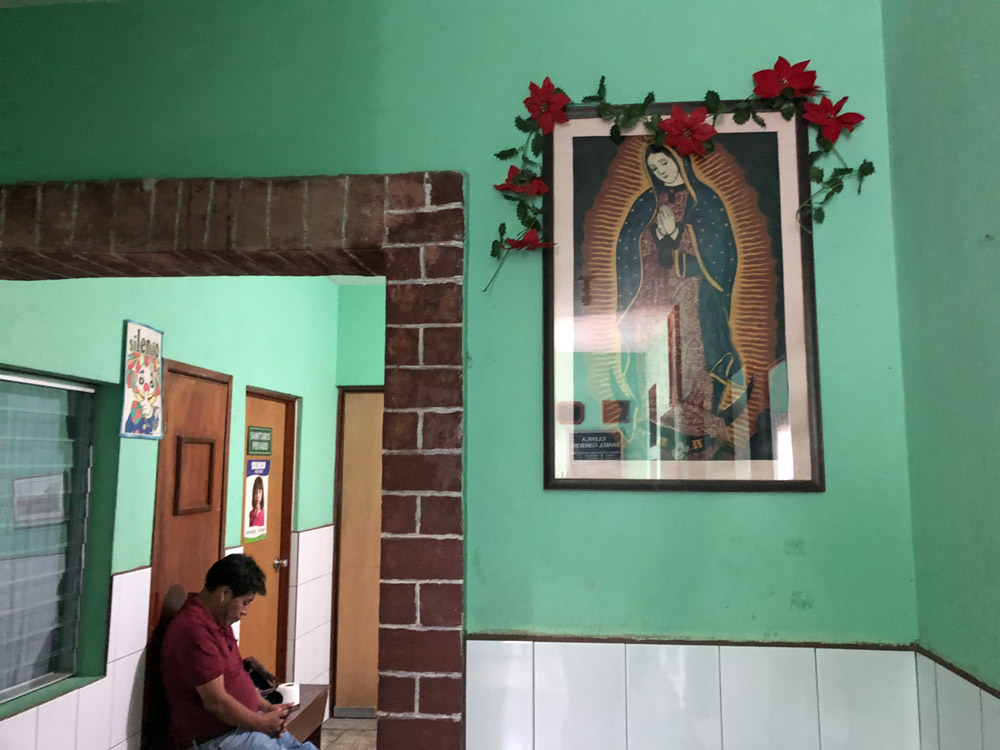 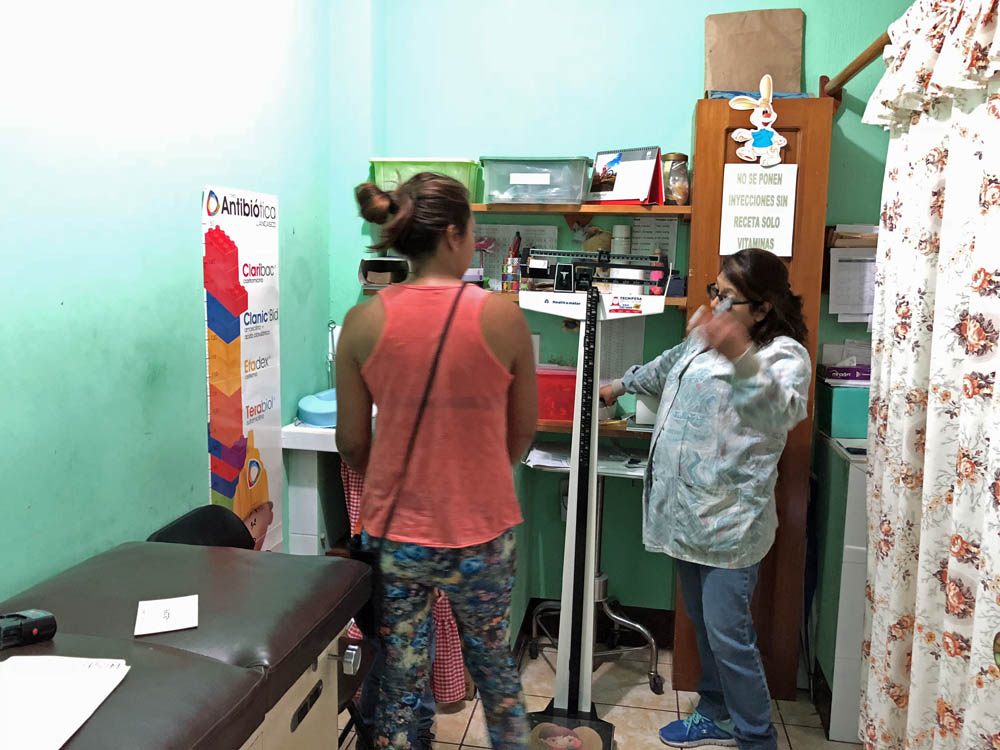