Editor's note: This is the first in a three-part series examining how sisters and others are working to heal cities divided after incidents of anti-black racism. Read Part 2 and Part 3.

These days, School Sister of Notre Dame Cathy Doherty devotes most of her energy to promoting interracial friendships between students in the St. Louis-area parochial schools. It's not what she ever imagined she'd be doing, but, as Proverbs says, God's purpose tends to prevail over our best-laid plans.

Nearly every surface of Doherty's office is covered by an image, candle or figurine depicting Our Lady of Guadalupe, the namesake of the parish in Ferguson, Missouri, where she has served as pastoral associate for nearly three decades. Sitting at a conference table — one of the few uncovered spaces in the room — Doherty explains how the events of Aug. 9, 2014, upended everything she thought she understood about what God had called her to.

"My life totally changed when Michael Brown died," she said.

Before "the Ferguson incident," as she calls it, Doherty's whole world had been liturgy: Her master's degree is in liturgy, she had been the chair of the St. Louis liturgical commission and she was in charge of the St. Louis Archdiocese's annual Liturgy Camp for high school students.

But after Darren Wilson, a white police officer, fatally shot Brown, a black 18-year-old, just 3 miles from Our Lady of Guadalupe Parish and then faced no charges for it, Doherty said focusing on ritual at the expense of racial injustice seemed inappropriate.

"How do you live around that eucharistic table with everyone if you don't preach it?"

Today, Doherty's goal is to head off in students the kind of personal-level racism that many attribute to Wilson: the kind that causes a 28-year-old white man to look at an unarmed black teenager and see, instead of a human being, a "demon" that can only be stopped with 12 rounds of ammunition.

Doherty's hallmark program is made up of second-, fourth- and seventh-graders from three schools: the mostly black and Hispanic Our Lady of Guadalupe and the mostly white Incarnate Word and St. Cletus. The first year of the program, students visited each other's schools to learn Catholic social teaching. The second year, Doherty zeroed in on the idea of culture by having students make family trees and research Marian apparitions from around the world.

"If we start when they're little, hopefully, when they're adults, they won't have racism," she said with a thin smile.

In the four years since Brown's death, dismantling racism — at both the personal and systemic levels — has become an integral part of the St. Louis Archdiocese's official mission. Eleven days after Brown was shot, Archbishop Robert Carlson announced he was reviving the 1963 Human Rights Commission (renamed the Peace and Justice Commission) in an effort to better facilitate the Catholic response to the public grief and outrage.

Three women religious, Doherty among them, were named to the 27-member commission, but its director, Marie Kenyon, said to truly understand how local sisters have been galvanized against racism in the last few years, you have to look at the way they've transformed their existing ministries.

For example, Kenyon said, a sister artist opened an art gallery featuring a painting of a black Christ; a sister educator spearheaded a diversity and inclusion training for the principals of all the parochial schools; and a sister community organizer set up interracial, interfaith conversations on race in nearby St. Charles County. Kenyon said she could go on and on.

Of course, anti-black racism in Ferguson didn't begin in 2014. The U.S. Department of Justice's investigation of Ferguson's mostly white police force found a "long history" of officers singling out black residents for degrading and unconstitutional treatment. St. Louis itself is the 10th most segregated city in the nation, the lasting effect of the legal strategies drawn up during the Great Migration of the first half of the 20th century to keep black people out of white neighborhoods.

But what Brown's death and the subsequent protests forced many white people in the St. Louis area — including women religious and other social justice Catholics — to wrestle with was the luxury they had of assuming things weren't that bad.

To illustrate how her consciousness has expanded, Sr. Sarah Heger, a Sister of St. Joseph of Carondelet and principal of Marian Middle School, a Catholic school in St. Louis for low-income, high-achieving girls, tells the story of the day a police car came through the parking lot while she was waiting for students to be picked up after school.

"One of the girls ran into the gym building ... just so scared," Heger said. "And I don't know that, prior to [Brown's death], if I would have been as aware of what that was like for her and what an appropriate response to that might have been."

For the last year or so, Heger, who considers herself a white ally, has been participating in the near-daily protests still going on in and around Ferguson. "Protest," though, is a loose term, she said. There's the typical marching in the street, yes, but sometimes "protesting" means going door-to-door for a voter-registration drive or attending a town hall meeting as a bloc.

Doherty, who's remained in Ferguson through three states of emergency — all declared while protesters took to the streets — concurs that the homegrown protests have all been peaceful; it's been outside agitators who have done things like loot businesses and burn down buildings. She said it was obvious some of them were from out of town because they destroyed businesses that were actually in Dellwood, the next town over, rather than Ferguson.

However, the peaceful protesters aren't without their critics. Heger said some white St. Louisans have expressed frustration with the protesters, claiming their goals are unclear. But Heger said she thinks that frustration reflects a basic misunderstanding of how racism works.

"It's not up to the protesters to have a list of demands," she said, shaking her head. "It's up to the people whose skin looks like mine — the people with power and authority — to say, 'We're changing this because this is wrong.' Not because they want the protests to stop."

'My life, my consciousness will never go back'

In September 2015, the Ferguson Commission released a 198-page report that spoke to many of Ferguson's racial wrongs and offered solutions. The multiracial commission, which Missouri's then-governor, Jay Nixon, had convened the year before, suggested reforms like bringing area schools back up to accreditation standards, improving the relationship between the police and the community, and building "healthy, affordable" housing for everyone.

But in the ensuing years, not much has changed in Ferguson, said Adolphus Pruitt II, president of the St. Louis NAACP.

"While there's been a significant amount of attention to what's going on in Ferguson, that has not necessarily created a return investment," he told GSR, adding that adverse indexes for housing, health and education for black people have barely budged in the last four years.

Meanwhile, developers have poured millions of dollars into new commercial projects. However, these projects have mostly proven just how hard it is to excise the habit of white supremacy: As the St. Louis Post-Dispatch reported in 2017, 41 new businesses were built in Ferguson over the span of a year — most of them in predominantly white neighborhoods.

Pruitt said he doubts if most of the created jobs have gone to Ferguson residents.

Still, Heger is optimistic. She said she's not naive enough to think that undoing generations of racial inequality will happen overnight. Not only do racist thoughts and opinions have to change, but racist systems need to be dismantled and rebuilt in ways that are fair and equitable — all of which takes time, she said. But things are happening, and that's progress.

For example, St. Louis County residents on Aug. 7 voted Robert McCulloch, the prosecuting attorney many say protected Wilson, out of the office he held for 28 years. Replacing him will be Wesley Bell, a black city councilman from Ferguson with a history of advocating for reforms in the criminal justice system.

Heger said, "I know, personally, my life, my consciousness will never go back to where it was."

Furthermore, since Brown's death, she said she started having conversations about racism with white people in her sphere of influence who have never mentioned race before.

"Some of them are not pretty conversations, and I'm not sure how productive they are," she said. "But they're being had."

For her part, Doherty said she believes the movement toward justice will prevail because it has heavenly protection. She's seen the signs.

Our Lady of Guadalupe Parish was scheduled to have its annual Hispanic Fest eight days after the shooting, she said. They didn't want to cancel the event because they wanted to show the community they were not afraid to be out on the streets.

She convinced Auxiliary Bishop Edward Rice to clear his schedule so he could celebrate the opening Mass as a sign of solidarity, and after the Mass, the two of them took a pilgrimage to the spot where Brown died.

She said Rice asked her if she was afraid of the crowd.

"Not anymore," she replied. "Guadalupe is with us. She's not going to let anything happen to anybody today." 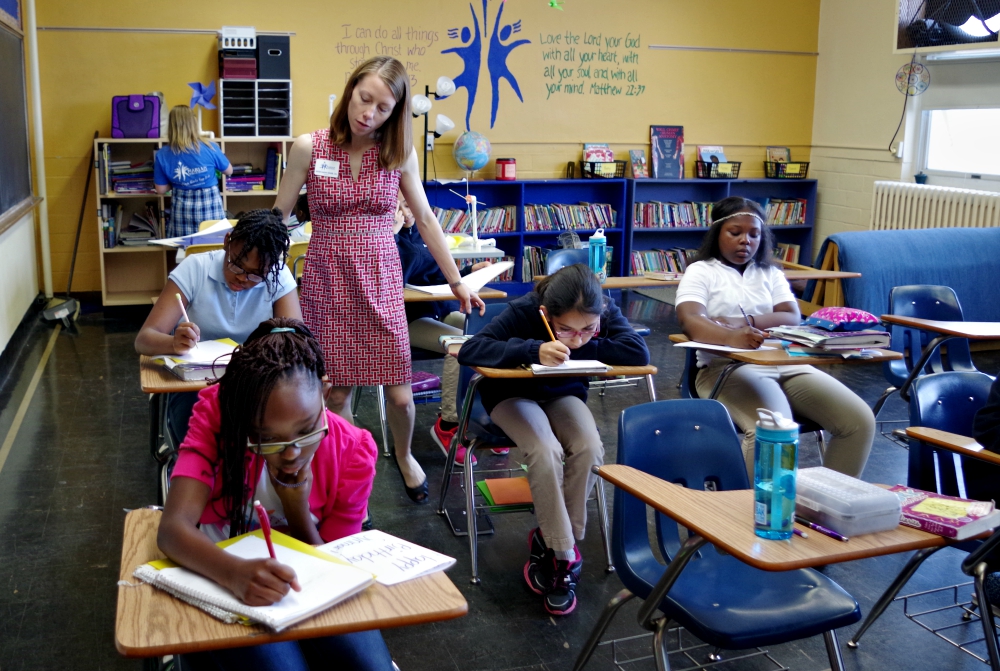 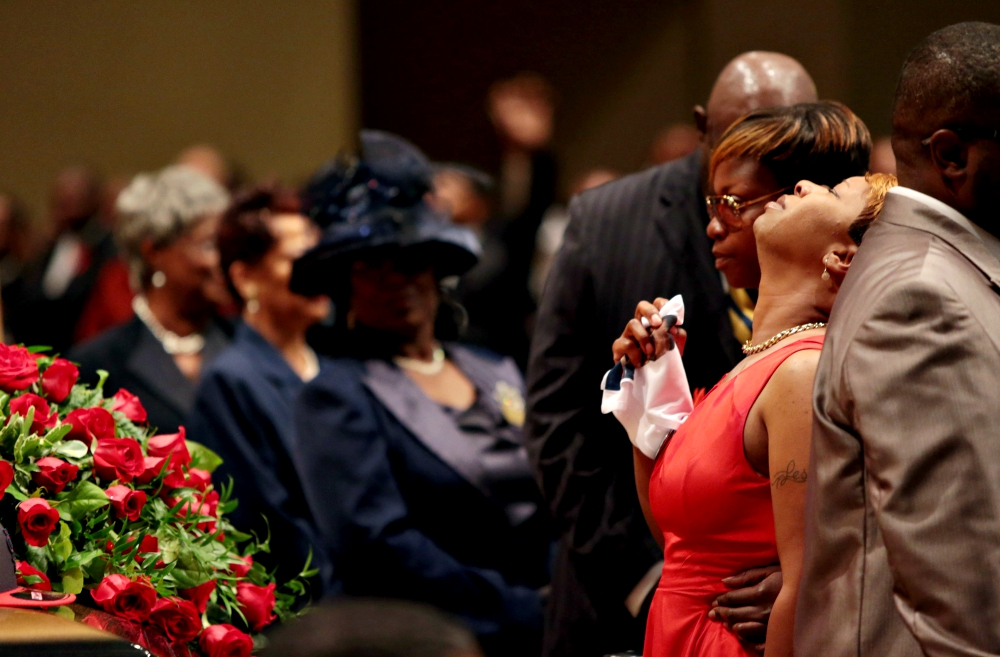 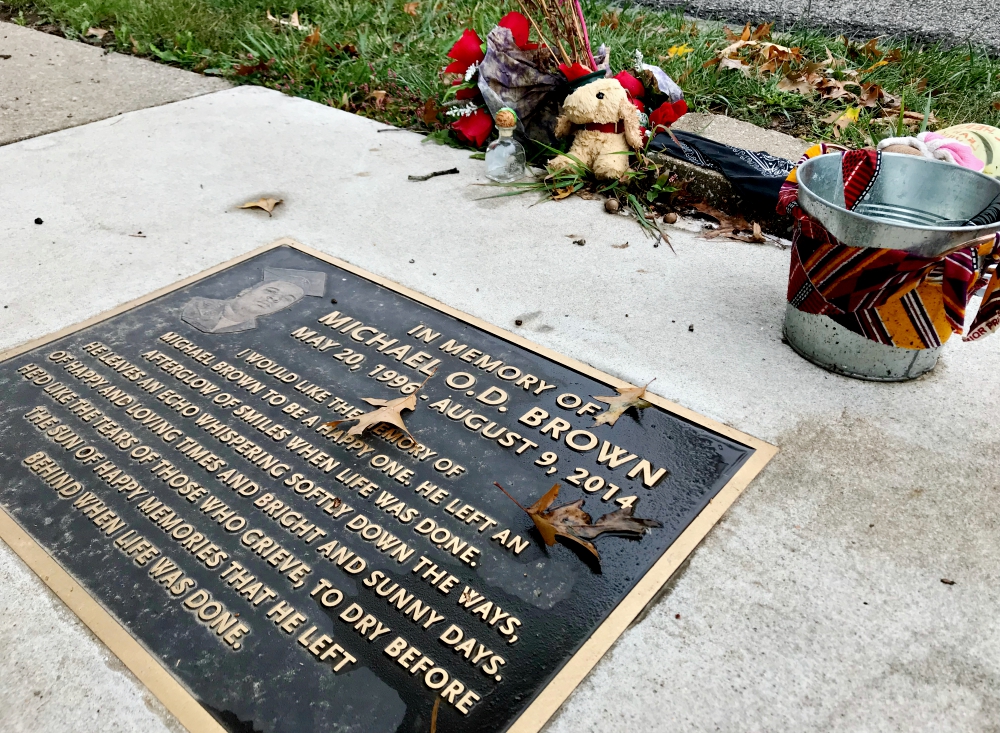 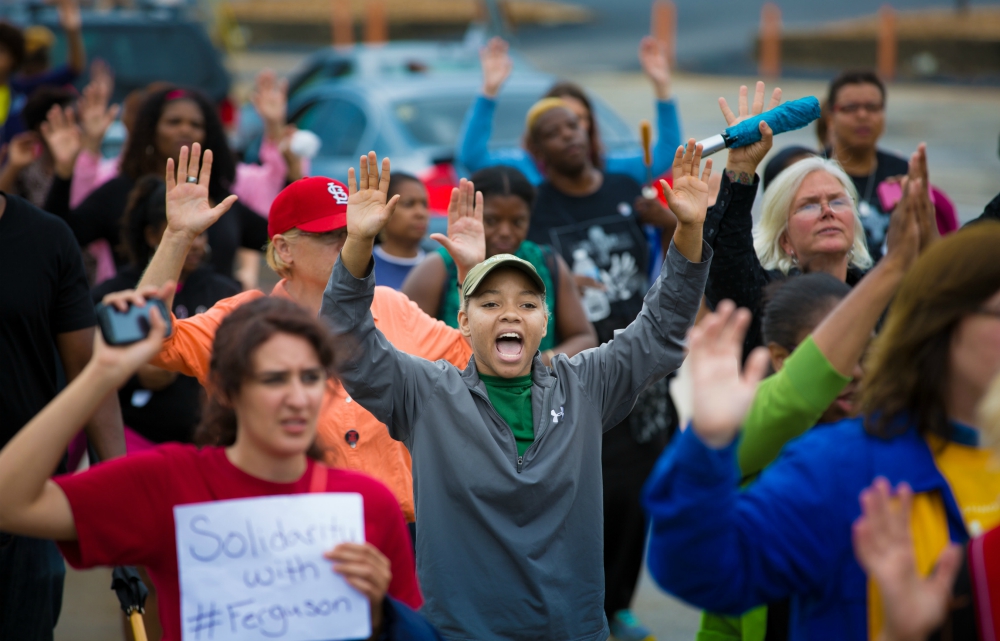 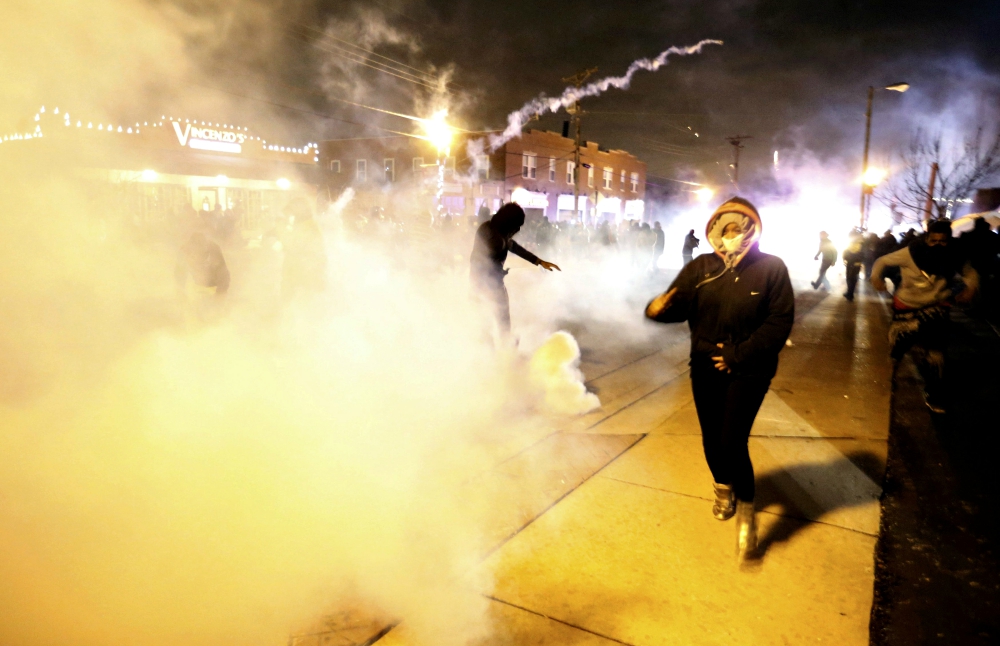 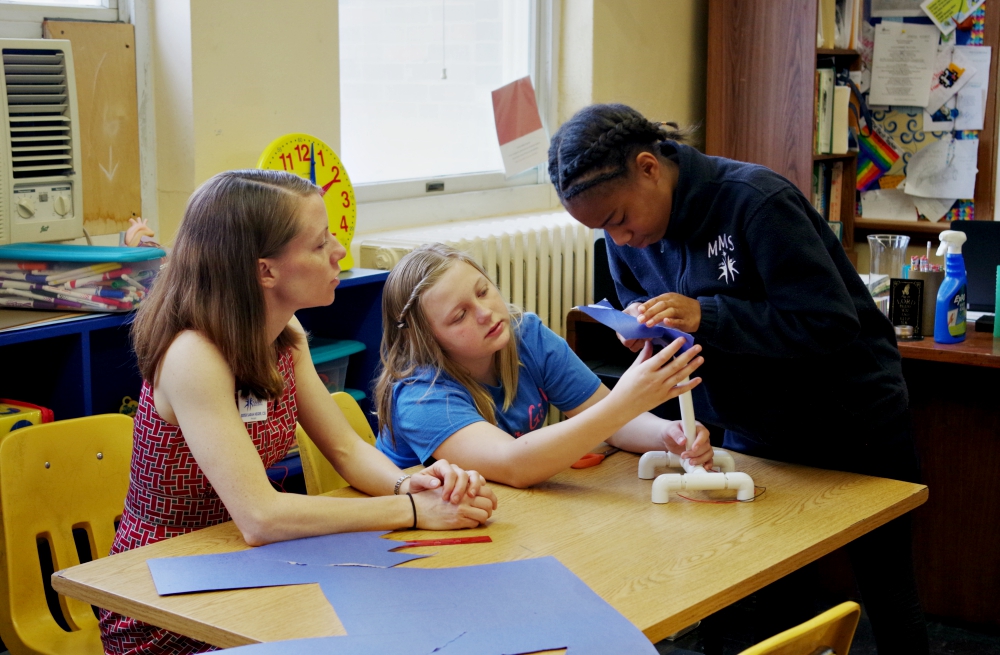 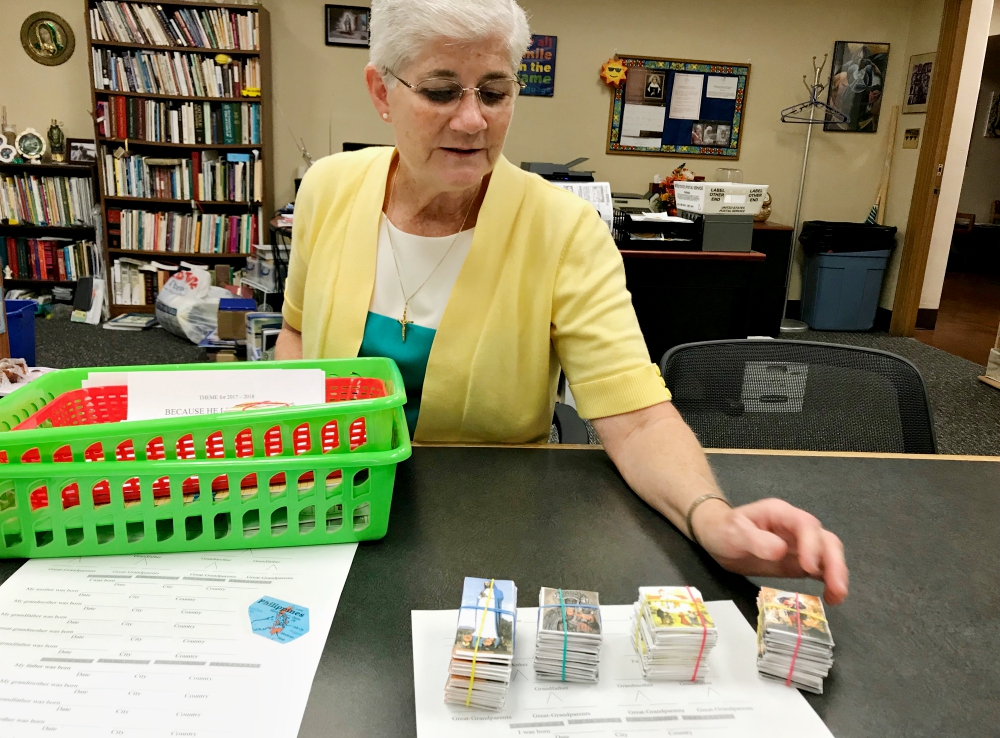