The first woman who came to them, just before Christmas 2010, was pregnant and fleeing war-torn Afghanistan. "Sarah" had nowhere to go and didn't know anyone in her new country, where she hoped to gain asylum. The Benedictine Sisters of Baltimore took her in, and her baby boy was born on Jan. 6, the feast of the Epiphany.

"We called it the new nativity story," says Benedictine Sr. Patricia Kirk, the community's prioress. The woman and her son lived with the community for more than two years, and the boy, now 6 years old, still spends one afternoon each week with them, doing his homework and eating dinner. "We were his babysitters," she says.

Four asylum-seeking women have lived with the Benedictines over the years.* "It's been a rich and beautiful experience for us. Life changing," says Kirk. She recalled how that first young Muslim woman and the sisters prayed together and discussed their religious traditions — the ways they were different, as well as the ways they were the same.

Not long after the Benedictines opened their doors to Sarah, they joined with seven other religious communities to brainstorm how they might meet the needs of asylum-seekers, almost exclusively women, seeking housing and aid in Baltimore.

"If it had not been for the sisters, we would not have been able to get this effort started," says Tiffany Nelms, Asylee Women Enterprise's executive director, who estimates that the program has helped some 400 women since it began. The religious congregations provide not only housing for some of the women, but financial assistance for the center's programs as well as volunteering there, she notes. Individual donors, congregations and foundations also provide financial support.

Mission Helpers Sr. Marietta Russell took in the first woman to stay with that community — in Towson, Maryland, outside Baltimore — six years ago. "She moved in just like one of the sisters," says Sister Marietta, of the young woman who has since been granted asylum and moved out of state. "She was a delight to live with. I feel like I lost one of my own family," when she left.

The Mission Helpers currently host three women from Asylee Women Enterprise and have hosted a total of 12 since 2011. They have occasionally housed men, including a champion runner from Nigeria whose wife and child were eventually able to join him. The Mission Helpers worked with him to find employment, and the family now lives in Virginia.

Two young women housed by the Mission Helpers recently moved out, with one headed to a Catholic law school in the Midwest. The sisters requested that Global Sisters Report not print specifics about any of the asylum-seekers, to protect their safety and anonymity.

Sarah, the first woman to receive services, came to the Benedictine Sisters through an urgent appeal from the United Way. Most of the women are referred by lawyers, churches or other service providers. Often well-educated and fleeing persecution in their home countries in Africa and the Middle East, some find Asylee Women Enterprise themselves, while researching their options online. In the last 18 months, AWE has seen more women fleeing gang violence in Latin America, and more single mothers.

Ultimately, helping the women achieve independence is the primary goal. To that end, Asylee Women Enterprise provides numerous services at the old convent building, including employment and education programs, English language classes, counseling opportunities, clothing and a food pantry, hospitality or drop-in hours, and, not least of all, housing, either with religious congregations or in apartments.

Unlike refugees, who are referred to the U.S. through the U.N. Refugee Agency and are assigned to an official resettlement agency that provides housing and cash assistance, asylum-seekers receive no government benefits and are not authorized to work in this country unless they receive asylum or until 150 days have passed from their asylum application with no decision being made. The asylum process can take more than five years, Nelms said. (Read more about the process.)

Some of the women clandestinely take jobs styling hair, cleaning houses or working in restaurant kitchens, often for substandard cash wages. "We do let them know the risks of being caught up in a raid," if the worksite is targeted by immigration and customs enforcement, says Nelms, but some would rather take their chances, just to make a little money to help support themselves and their children. "We try to educate them about the minimum wage."

Sr. Anne Hefner, a Sister of St. Francis of Philadelphia and Asylee Women Enterprise's director of volunteers, noted that most of the women come from countries with some form of socialized health care. "They can't believe there's no free health care here," she says with a laugh, "and that they have to pay taxes."

The Sisters of St. Francis of Philadelphia support Asylee Women Enterprise by funding Hefner's work recruiting and training volunteers to work at the center. While there were only about six volunteers three years ago when she started, there are now roughly 45, she says. "Our volunteers are integral," she says. "We could not run a day program at all without them."

Volunteers — including women religious — teach English and music classes; help the women write resumes and cover letters, and work on their computer skills; teach them American cooking, yoga and how to use the public transportation system; wash loads and loads of donated clothes; and take the women to visit doctors and lawyers, who typically provide their services pro bono.

Women who receive housing assistance must visit the day center for services, to ensure that they aren't isolating themselves in their apartments. That is a real risk, given how overwhelming it can be to learn a new language and customs, far from home and family.

"We want the women to be part of a community," says Nelms. The women living in Asylee Women Enterprise housing receive a $100 monthly stipend for living expenses and another $70 for public transit, she says. Women who receive only day services can earn public transit vouchers through regular participation in classes and activities.

On a recent rainy Tuesday afternoon, about a dozen women worked on jewelry-making projects at the Asylee Women Enterprise center before attending an informational session on acupuncture, which has been shown to be effective for trauma victims. A fragrant lunch of rice, vegetables and chicken was on offer in the kitchen, where the women share cooking duties for the midday meal, often making dishes from their countries. A few children scampered about.

A few of the asylees ate with Nelms and Hefner in the center's spacious dining room as a brand new industrial refrigerator hummed along a sidewall. The old refrigerator recently broke down and a donor let the group have the replacement for about $300. At twice the size of the old one, it's too big for the kitchen, but they are grateful for it.

"People are very generous," says Nelms, as she led a tour of the center. There's a food pantry; a "clothing boutique" with racks of clean, donated clothes for the women; a room with children's clothes and diapers; and another with children's toys. A prayer room has three small prayer rugs, a large community room is filled with chairs of every size, and there is a counseling and wellness room. A massage therapist sets up shop twice each month, providing her services at a discounted rate, because she supports the program's mission. Many of the women have injuries related to torture or trauma, Nelms explains, and massage therapy can benefit them enormously, although touch is often a fraught experience.

Counseling is also offered through one of AWE's partners, Intercultural Counseling Connection,* says Hefner. "They come from countries where mental health is not addressed," she says, but counseling is part of the "holistic" care that Asylee Women Enterprise offers. "Healing is mind, body and spirit," says Hefner. For many of these women, their path to healing and recovery can be long.

"They come fearful, but they leave more confident," says Mission Helper Sr. Dolly Glick, who serves on Asylee Women Enterprise's board. "Their thank yous when they leave are just magnificent. They say, 'You took me in when I was scared and afraid, and now I feel so independent. I can face anything. You've been like mothers and grandmothers to me.' "

She was present recently at the going away party for the young law student, who is in this country without her family. The sisters grew very fond of her, as they do all of the asylees. "She told us when she said goodbye to her mother, she thought it would be the last time she felt a mother's love, but she said she felt such love here."

"It was a delightful thing," says Mission Helper Sr. Mariel Ann Rafferty, who lived across the hall from three young asylee women at one time and reveled in the nightly chitchat with them. Adds Mission Helper Sr. Loretta Cornell, "This has been a gift from God." A third Mission Helper, Sr. Maria Luz Ortiz, their vice president, says, "It has been a wonderful, grace-filled relationship. We gave them a little bit, but they give us also a lot."

*This story has been corrected to specify that four asylee women previously lived with the Benedictines, and the name of AWE's counseling partner, Intercultural Counseling Connection, has been added. 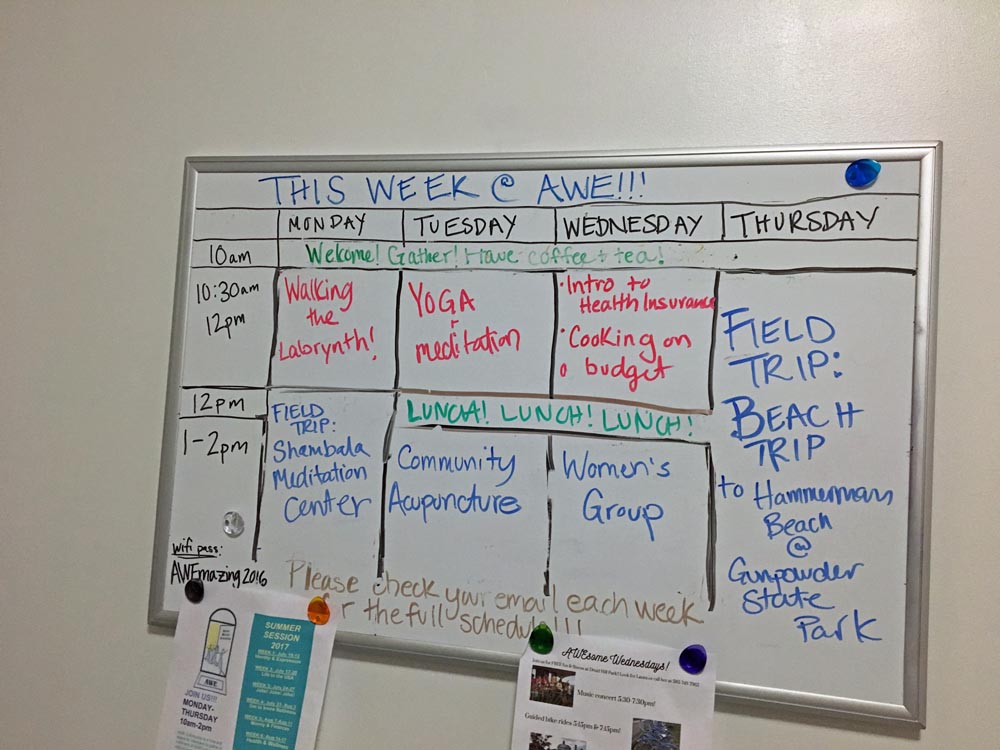 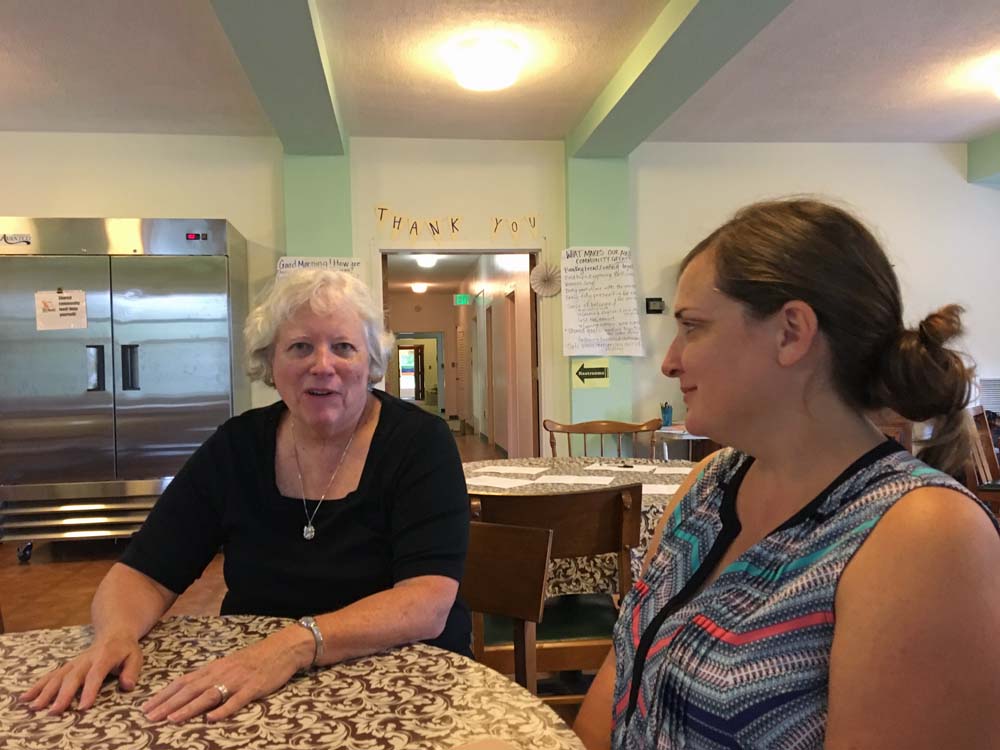 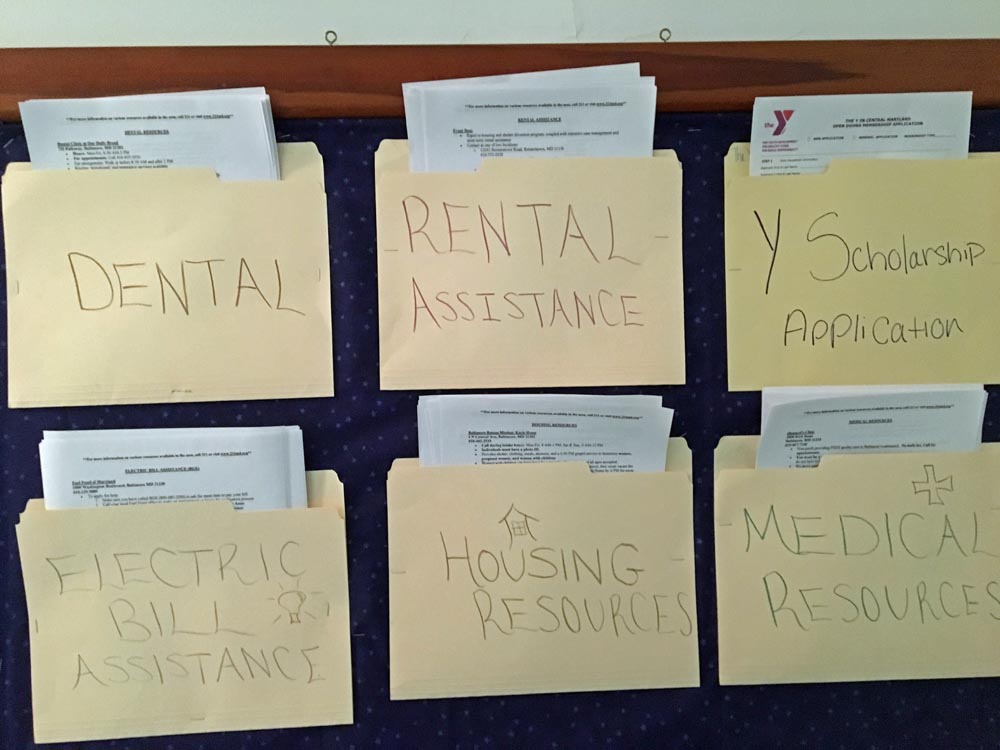 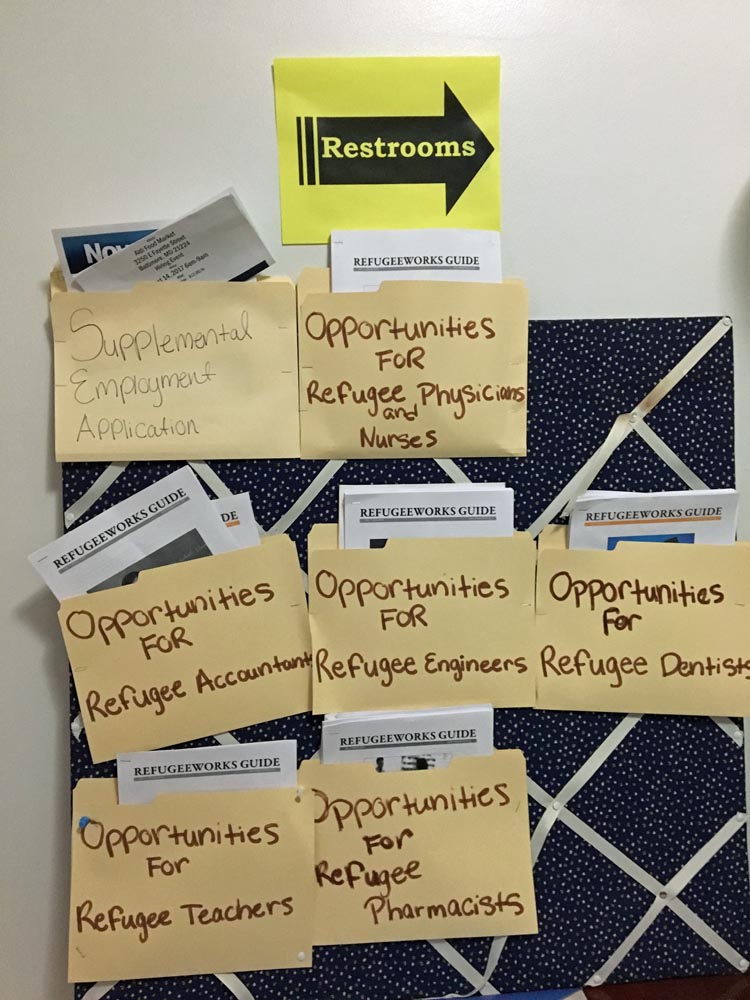 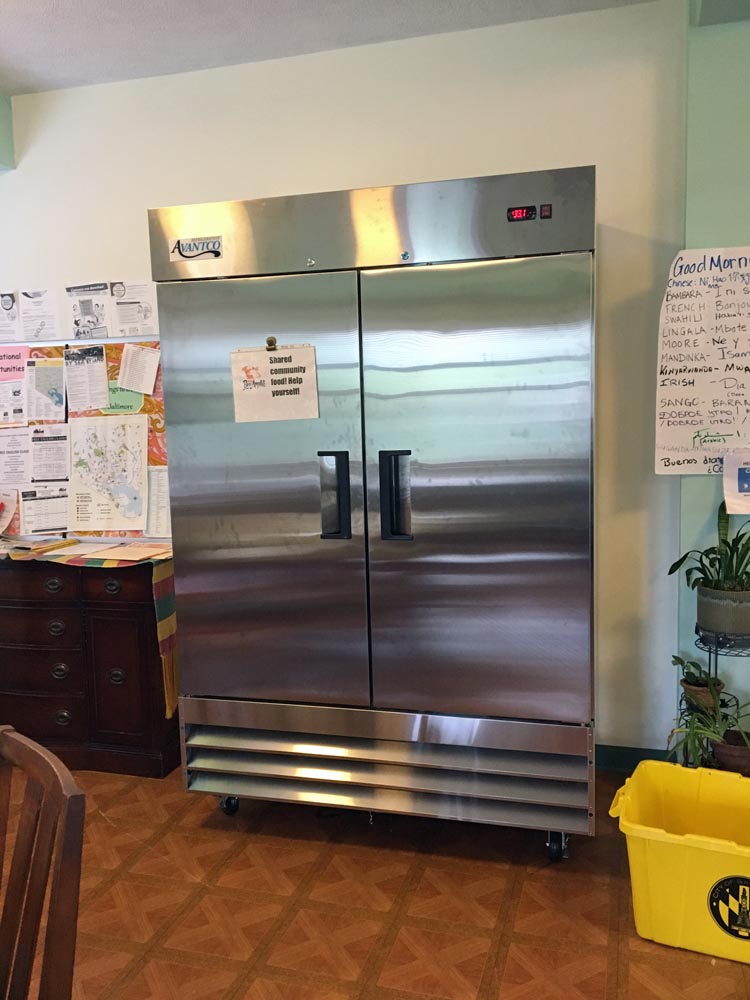 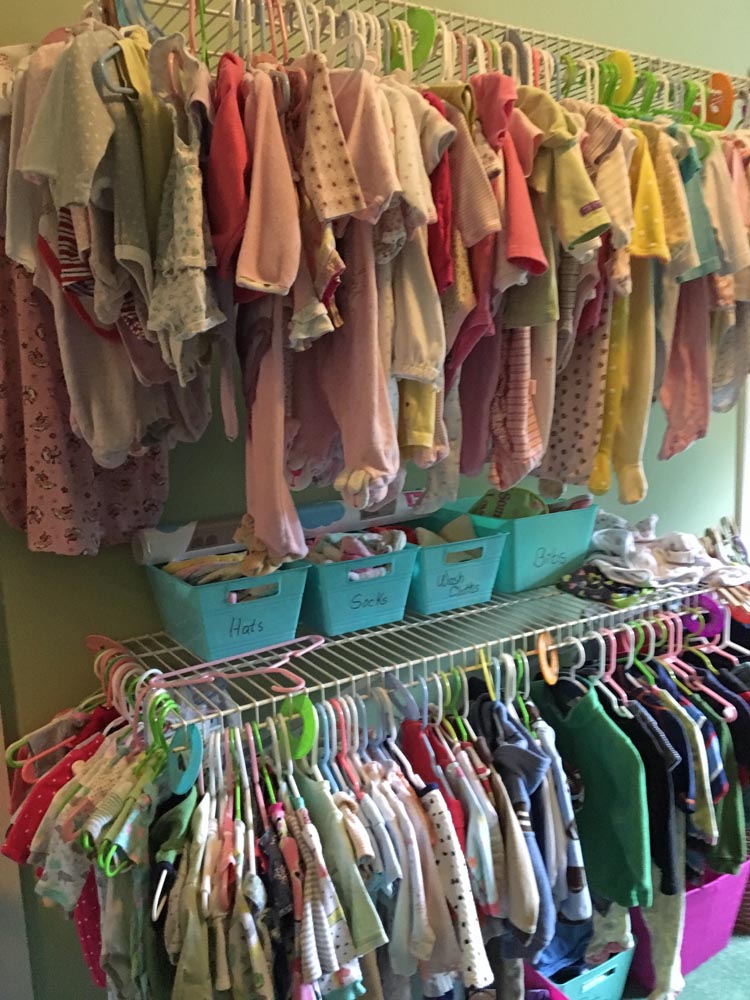