After three days of walking through the desert, an hour from her destination in Houston, Elizabeth Ortiz ran a short distance before U.S. immigration officials tackled her to the ground.

Ortiz had left Mexico City to earn money to send her teenage daughter to college in Mexico, something she knew was not possible on her $40-a-week salary there. She had spent five years undocumented in Seattle, but missed her children too much and chose to return to Mexico. A year later, she decided to try to enter the United States again, this time traveling in a group of 10. Three managed to run away from officials, and one man in his 50s had told the group to leave him behind. The remaining six, including 32-year-old Ortiz, were caught in early May.

As immigration officials pressed her face against the dirt, Ortiz said, she knew her chance had escaped her.

"I couldn't achieve the American Dream for a second time, and I don't plan on trying again," she told Global Sisters Report from a sister-run home in Reynosa, Mexico.

Casa del Migrante Reynosa, run by four Daughters of Charity in a town bordering McAllen, Texas, shelters deportees from the U.S. as they figure out what to do next.

"When they're deported, they bring with them a very intense pain because they invested in the journey," said Sr. Edith Garrido, a Daughter of Charity of St. Vincent de Paul who is originally from Hidalgo, Mexico. "Many sold their houses, their animals, or their land to pay for this journey. So they come back with even less. ... They come to us unraveled.

"For us, the work is to reintroduce hope in their lives, to tell them, 'True, you don't have money, but you're young, you're healthy, and you have the will and initiative to get at least this far, to move your life to a new place and confront new realities. ... At that age, you have your whole life ahead of you.'

"That's our job: to awaken them to their new life."

The shelter was originally built 14 years ago for migrants heading to the United States, said Sr. Maria Nidelvia, a Daughter of Charity of St. Vincent de Paul and director of Casa del Migrante. Migrants knocked at church doors throughout Reynosa until a local parish offered their catechesis room where they could sleep.

"But eventually, that room wasn't enough, so the people [from that parish] helped make this shelter happen," Nidelvia said.

The diocese laid the first brick in 2004, and in 2005, Casa del Migrante began operating, still with the original parishioners, until they eventually called the Daughters of Charity to take over. The shelter receives financial support from the diocese, Christian churches, donations, and occasionally government support when it is able.

Today, the four sisters — including Nidelvia and Garrido — run the shelter with a handful of volunteers, offering a bed, meals, new clothes, hygiene kits and social services to deportees.

"When they arrive here, they cry like babies," Garrido said. "It's a profound frustration: They wanted something better for their families, and instead the earth caved beneath them."

Casa del Migrante receives around 1,100 deportees a month, said Nidelvia, who's been the director for seven years. Three flights a week from across the U.S. bring deportees to the border, who then take a bus to the migrant shelter, she said. Not all need to stop at Casa del Migrante if they've already made arrangements with their families.

Those who stay in the shelter are typically those who were deported without any money, resources, or the means to communicate with or get to their families. Casa del Migrante also takes in those who seek refuge as they continue migrating north. All stay about three days, though can stay longer depending on health or legal needs, Nidelvia said.

In addition to hygiene kits (toothbrush, soap, towel, clothes, and underwear), the shelter also offers free phone calls, medical and psychological consultations (provided by Doctors Without Borders), personal interviews with the sisters or social workers, group therapy — "whatever they want," Nidelvia said. "It's personalized according to the circumstances of their arrivals."

Some are desperate to get back with their families and work in Reynosa to earn just enough money for a bus ticket home, she said. Those who don't have family typically end up working longer in Reynosa.

"That's why Reynosa fills with people," Nidelvia said. "The city keeps growing to accommodate the people who stay on this side." They usually end up in maquilas, low-paying factory jobs. Others take temporary jobs, such as cleaning car windows, handing out newspapers or cleaning homes.

Those who don't have the proper papers or health to work usually wind up "destitute on the streets. But we do have a program for these people," Nidelvia said, referring to the meals that Casa del Migrante offers to the homeless every morning and evening.

While they only have about 120 beds, the sisters don't reject anyone, like the time when a caravan with 400 people pulled up from Central America two years ago, she said. The patio fills with mattresses pressed tight against each other, and local parishes step up to donate food and clothes on these occasions.

Nidelvia said she relies on the Holy Spirit to differentiate migrants from those who lie to take advantage of their services. "But if a person is honest about their needs and situation and they say, 'I'm not a migrant but I'm hungry' or 'I've been traveling and can't afford a hotel,' whatever, if they're honest, we say, 'Come on in.' "

Most who come to Casa del Migrante are Mexicans who have been deported — deportees are sent to their country of origin — plus a few Central Americans who are heading to the United States and who likely have been assaulted or are sick or injured and struggling to continue their journey.

Central Americans are often fleeing violence, while Mexicans are usually going to the United States as migrants, looking for work, Nidelvia said.

The shelter also has been receiving more migrants who have escaped the "safe houses," used by human smugglers or "coyotes," she said. As crossing the border became more difficult, sometimes up to 80 people are crammed into a tiny house without much food; some ended up waiting for months.

"Maybe they've been there going on three months; maybe they've had a finger cut off. They've seen people who couldn't pay the coyotes and were taken outside the safe house and are never seen again," she said.

"So when they come here, they need to be treated medically, psychologically, and helped to report the crimes. But usually they don't want to report the crimes because they don't trust the police, who are sometimes in cahoots with the coyotes. We could have three to four of these cases a month, and nobody will want to take action."

Despite being deported twice in the same week — including clocking time in detention and receiving a 20-year ban from the United States — 31-year-old Juan Ramirez is spending his days in the shelter weighing a third attempt at crossing the border.

Ramirez left his wife and 6-year-old behind with the intention of returning in five years and sending money to his family in the meantime. Both attempts were unsuccessful but were made with the same intention, to send money back. In his hometown in Aguascalientes (about 500 miles from the border), his wife watched their son and sold tacos while Ramirez painted furniture for 800 pesos a week (roughly $38).

"We wouldn't have enough to eat sometimes," he said.

When his cousin promised him a job in Houston painting furniture, Ramirez and his wife decided it was time to take the chance. He crossed the river in a boat through "tumultuous waters, then got off the boat and started running," he said of his second attempt to get into the U.S.

He and his group then walked for about an hour, hiding in the trees once they heard officials nearing. "Not sure how they saw us, but they had horses, motorcycles, trucks, helicopters, everything. We ran, and they caught us," Ramirez said.

"I've been communicating with my family in Aguascalientes, and they want me to keep fighting for it," he said. "I don't know if I'll go alone or try to find a group, but I'm scared now. If I'm caught again, I could be in detention for a month or longer — who knows, now that I've been banned for 20 years. The punishment worries me more than the journey now.

"I don't know why they don't just let us in if all we want to do is work. I just want to work."

Those deported who have spent decades establishing a life in the United States return with "a U.S. mentality; they don't think like Mexicans anymore," Garrido said, noting they come back with a more consumerist lifestyle of wanting personal washing machines and televisions.

"But they come back to Mexico and reanimate the fabric of our society," she said. "In the U.S., they learned discipline, they're responsible about paying taxes, they comply with schedules — nobody does that here. They come with new abilities and as hard workers. We're really enriched by these customs."

Still, they often leave behind spouses and children in the U.S. and start forming new families once they accept that they cannot reunite with their family there.

"When they're in detention, they spend a lot of time reflecting on their life and sometimes come out of it newly evangelized or committed to a new life," Garrido said. "They think about how they used to have one thing, and now they have another, or nothing. ... All of that makes you think about the way God works in one's heart.

"When we talk about this with them, you see their attitudes change, and they become more receptive to what's ahead. That's our job."

Every migrant who spoke with Global Sisters Report expressed gratitude for all that the sisters have provided and have done for their mental well-being during their brief stay.

"They've returned a lot of our spirits," one said.

"You see how the heart of a man, despite so many obstacles and difficulties, doesn't lose its ability to love or hope," Garrido said through tears.

"They leave in tears, and I say, 'How are you crying when you were only here two or three days?' But they cry because here they felt peace, they felt that God was with them at their lowest and loneliest. That is the presence of the Holy Spirit. All we give them is attention and care, and yet they're able to leave totally changed, with their spirits renewed." 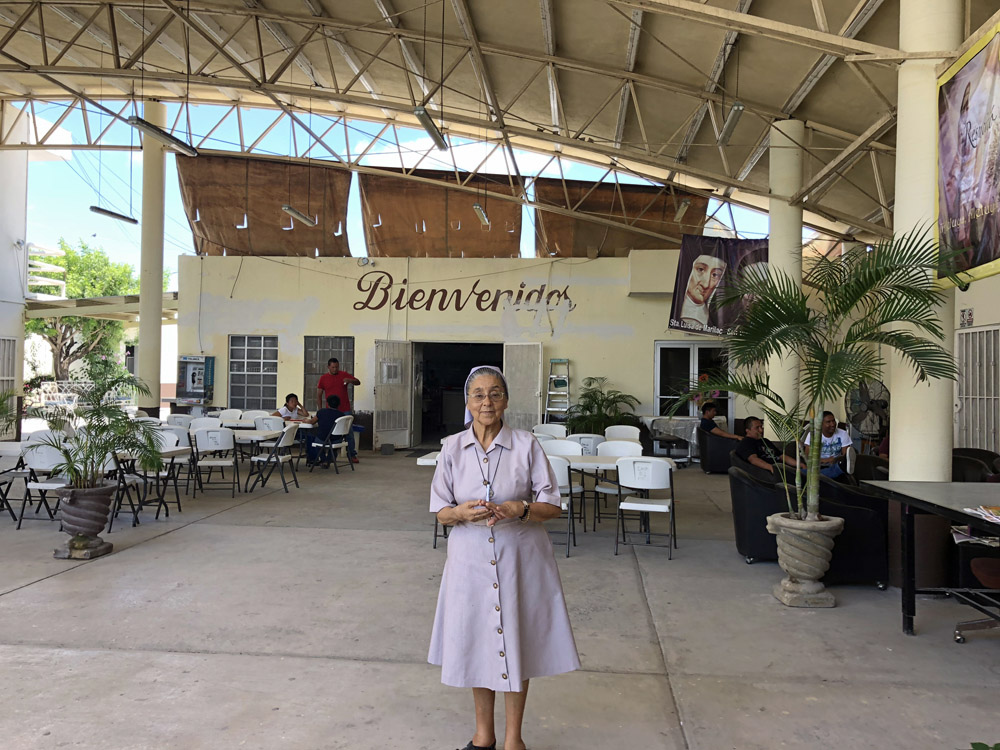 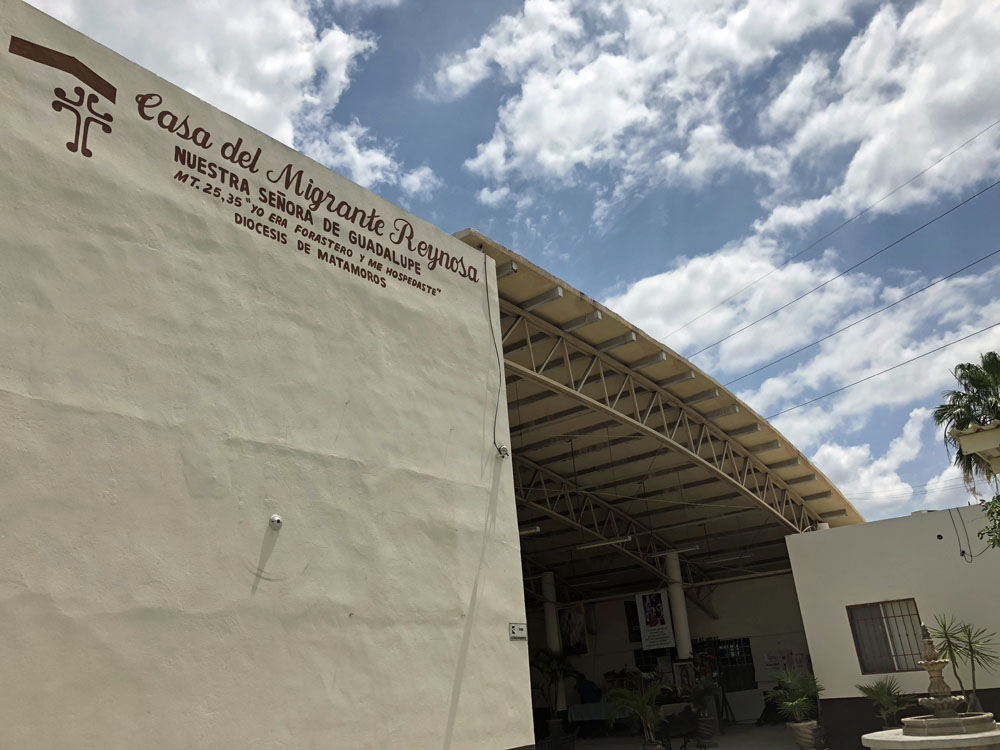 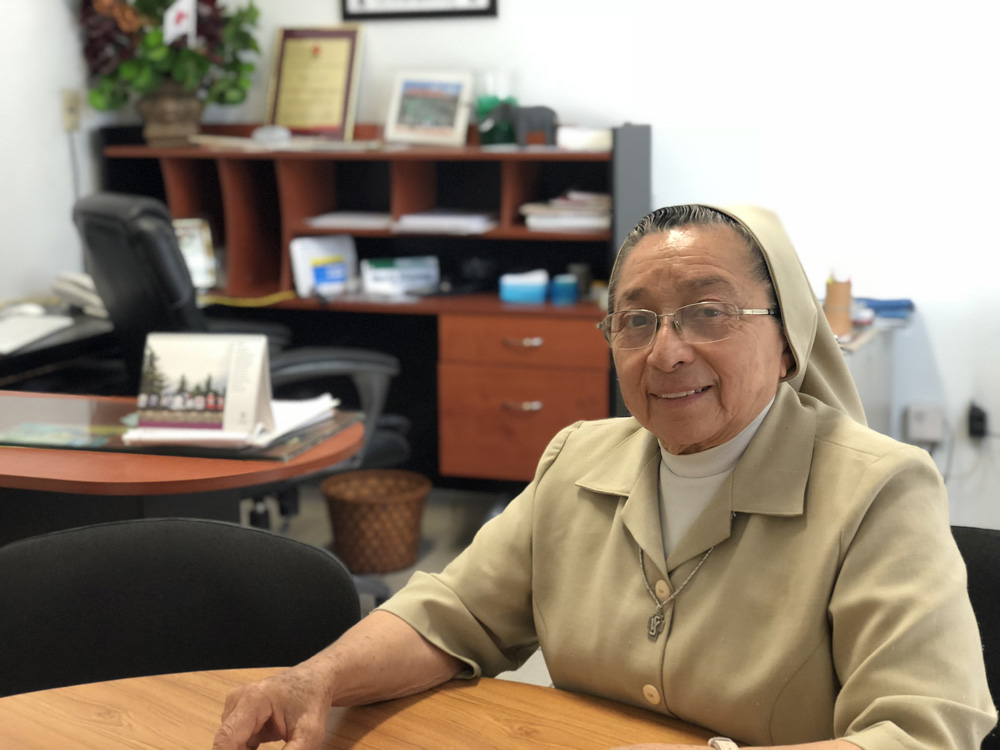 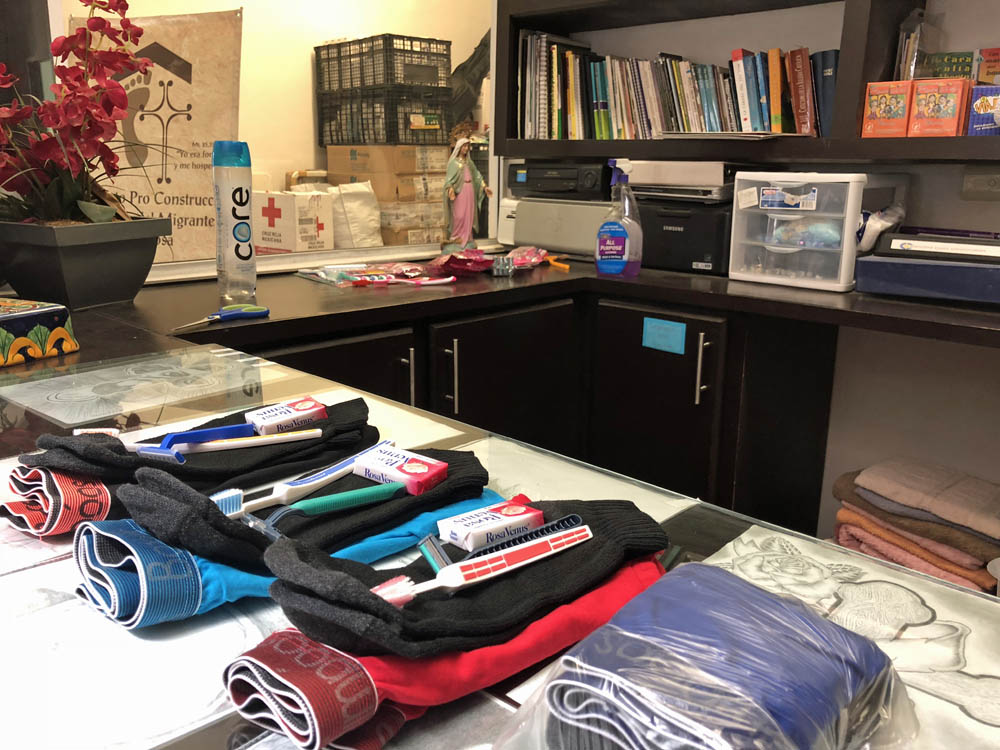 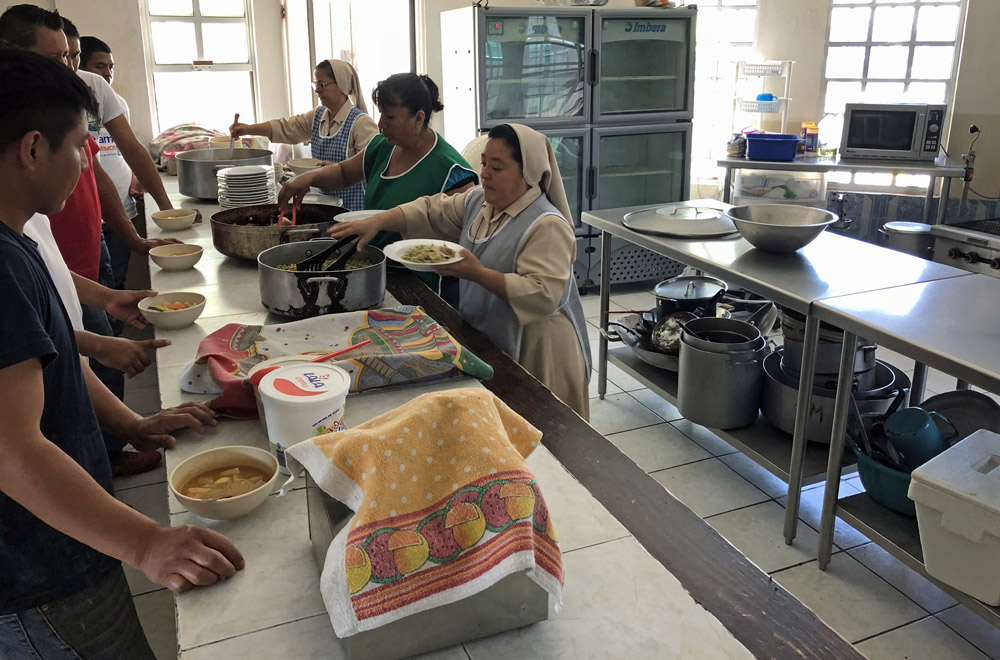 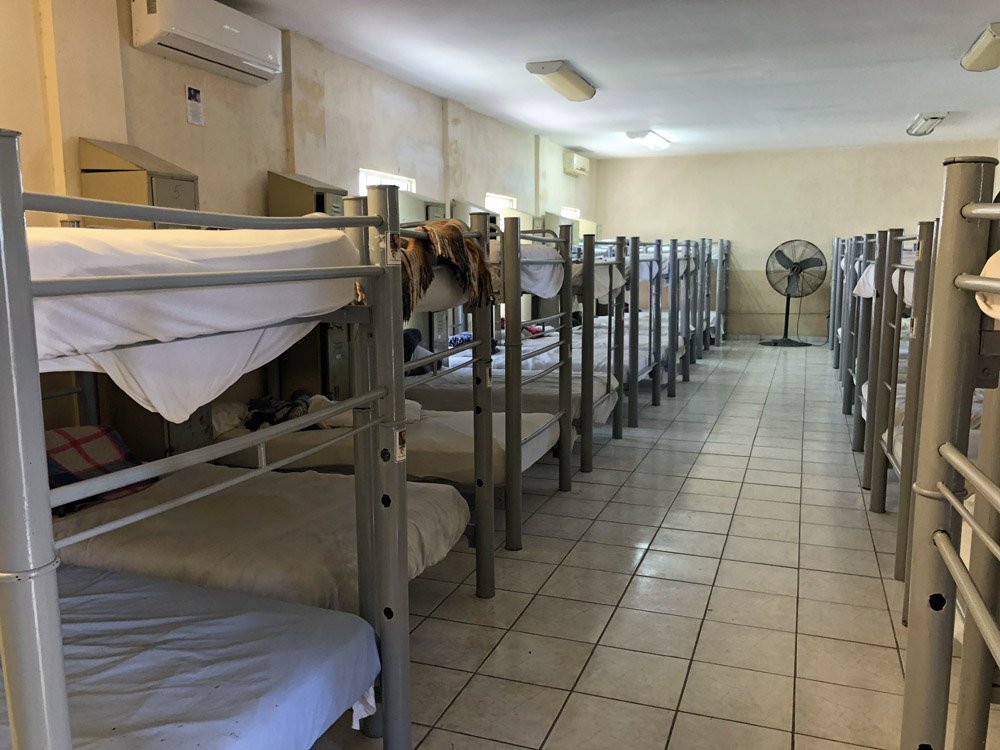 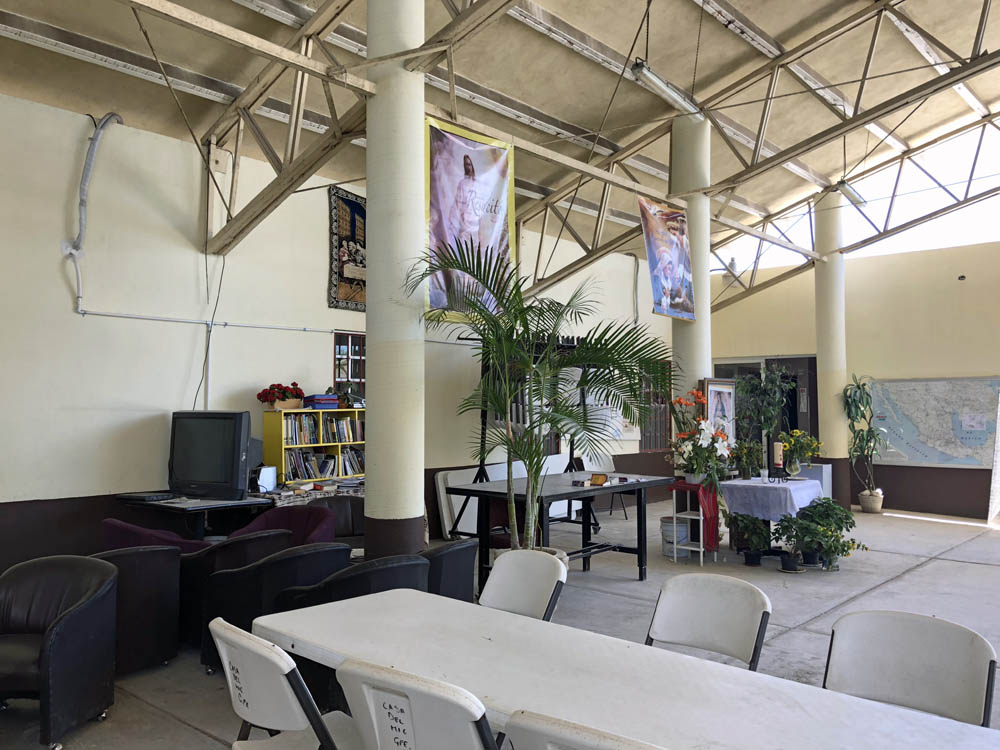 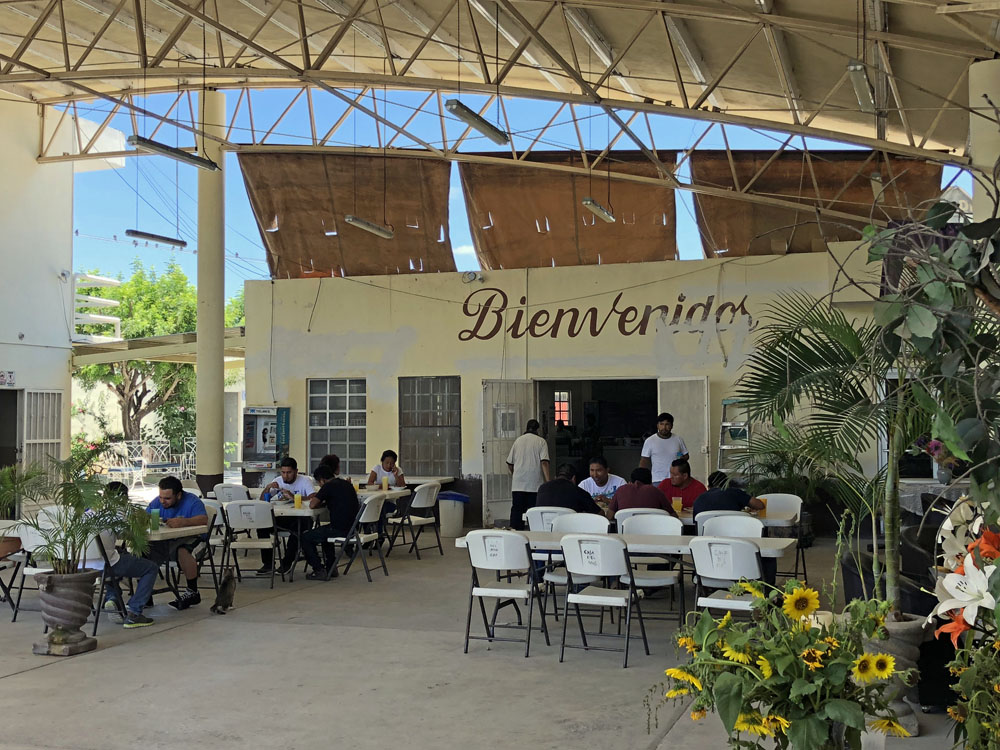 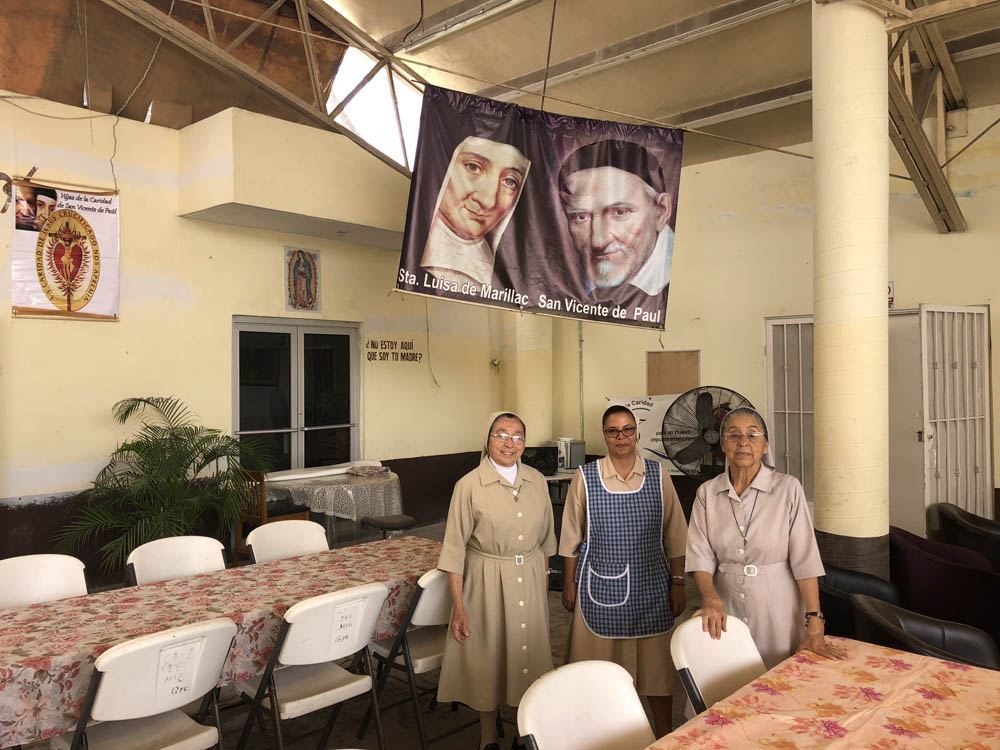