Editor's note: This is the third in a three-part series on sisters helping migrants who are crossing Central and North American borders in pursuit of a better life in a new country. Read Part 1 and Part 2.

Guillermina escaped not one, but two death threats before ending up with her two children in the northern Mexico border town of Nogales, waiting to be interviewed to apply for asylum in the United States.

The first escape was from a gang in El Salvador who raped and threatened to kill her with a machete at her throat. She fled to Quintana Roo, Mexico's easternmost state, where she married a Mexican national. The second escape was from her drug-addicted and alcoholic husband and a brother-in-law who often resorted to violence against her. Deciding that she wanted to live, Guillermina gathered her two children Jose Daniel, 10, and Alexa Guadalupe, 5, packed up and fled. "I am a single mother, with no relatives and no friends. Someone gave us a room to sleep here in Nogales. We have come to El Comedor to eat every day since we came to this town 15 days ago."

For Sr. Maribel Lara, listening to an asylum-seeker's story such as Guillermina's is a "sacred moment." She interviews a lot of migrant asylum-seekers as an intake application coordinator at El Comedor, the popular name for the Aid Center for Migrants. "It is a sacred moment because they open their hearts, talking about suffering and pain during their journey," said Lara, a Missionary Sister of the Eucharist. "I look at their faces as I listen to their stories."

Located about a 10-minute walk south of the Mariposa Border Crossing, El Comedor (Spanish for "dining room") serves meals twice a day and provides clothing items, toys, shoes and first aid for the migrants. The center, which borders the city of Nogales, Arizona, and the state's largest international border community, serves meals to about 150 to 180 people in the morning and 120 to 130 in the afternoon, every day of the year, said Sr. Cecilia Lópes Arias.

Every day the sisters minister to people who have encountered stressful situations. "We hear so many sad stories, such as a story of family members killed by a gang, or family separation with U.S.-born children living across the border while their deported parents are here," Arias said. She also listens to young people who were brought to the U.S. as children, and are now deported. Since they grew up in the U.S., they can hardly speak Spanish and have no connection with their parents' original culture.

To handle the stress of their ministry, both Arias and Lara expressed gratitude for their community life. "We begin our day by praying together," Arias said. "We have meals together, supporting each other and sharing conversation about our day. This is part of our religious and community life. This is how we draw our strength." Arias also noted that she takes Sundays and Mondays off, and an annual 15-day vacation.

Lara, who was born in Veracruz, Mexico, said making a retreat and taking personal time is a good way to take care of oneself. "Besides praying with my sisters in the morning and sharing with them my community life, on my Sunday off I do laundry and take a long walk." Most importantly, she added, "we have to trust and leave everything that is going on in God's hands."

There are four Missionary Sisters of the Eucharist in the Nogales community, part of a congregation of about 60 sisters, living in 11 communities in Mexico. Arias coordinates the daily meals at El Comedor, buying food supplies, helping volunteers in the kitchen and serving the meals when there are not enough volunteers. She prefers to carry out her ministry by working in the "base" community, not in a leadership position.

"Many of these people are dealing with a situation of hopelessness. I can see how life on the run makes an impact on their lives. Some were angry. Some were sad," said Arias, who is from Jalisco and has been a Missionary Sister of the Eucharist for 27 years. "This morning, we served meals to six deported individuals and more than 100 adults and children from the south. They have been waiting here up to three months or more for the chance to be interviewed for asylum status."

Sr. Engracia Robles Robles is responsible for human rights education. She has an educational radio program, part of the Radio Xeny Group, where she talks about the human rights of asylum seekers, services and reports on El Comedor. On Facebook, she gives regular updates on how many people they feed and solicits donations.

The four Missionary Sisters of the Eucharist are part of a bi-national migrant ministry called the Kino Border Initiative that also includes the Mexican Province of the Jesuits, the Jesuits West, Jesuit Refugee Service/USA, Mexico's Nogales diocese, and the Tucson Diocese in the U.S.

The four sisters are to be commended "for their powerful spirit of dedication and hospitality in their educational, social and charitable services to asylum-seekers," said Fr. Sean Carroll, executive director of the Kino Border Initiative. Started in 2008, the organization provides humanitarian aid, meals, clothing, pastoral support, first aid and referrals daily at the Aid Center for Migrants and short-term shelter at Nazareth House for unaccompanied women and children. It also provides education and immersion experiences, gives community presentations and workshops to schools and church communities. It also participates in collaborative networks that engage in research and advocacy to transform local, regional, and national immigration policies that reflect values of family unity, social justice and human dignity.

In addition to her duties as an intake application coordinator, Lara also is the coordinator and retreat organizer for the volunteers. Every two weeks, she also heads up a group of volunteers who have special approval to visit the migrants' family members who are incarcerated in the U.S. Federal Detention Center in Eloy, Arizona, for moral support.

Both Arias and Lara also draw strength and encouragement from Pope Francis' messages for the migrants. Arias said the pope encouraged priests and religious not to be occupied with themselves, but to be more open-minded to the real needs of the people. "We need to experience the real life of the poor and the suffering." The pope's message resonates within her, she said, because her ministry is always at the "base" — in the local community. "I have always worked with poor indigenous people. I understand what poverty means, as I lived with them in my past ministries."

For Lara, Pope Francis' message about being "holy" in today's world is nothing new. "I have tried to live up to the call to holiness since I entered my religious congregation 31 years ago. When I was in formation, we went out to meet people and experience the reality in the local community. We analyze the reality, and learn from it. It is important to learn from the pope when he says the church has to be out on the margins. You must leave the structure and go outside of yourself," she added.

Of the proposed border wall, Arias said, the wall has a "worse" meaning than that of a barrier that separates two countries. It puts fear in people, separating family members. It is also a sign of "suppression and rejection."

When people sought asylum in the past, it was not as difficult as today, she said. They used to be able to apply for asylum within the U.S. Now they have to stay and wait in Mexico, making it much more difficult. "Sometimes people are desperate," she said, recounting the recent tragedy of a father and child who drowned in the Rio Grande trying to cross the border. "Many people die in the desert or in the river. There are many people who died that we know about, but there are more people who have died in the Sonoran desert that we don't know."

There's no known total number for those who have died crossing the desert, said Dr. Gregory Hess, chief medical officer of the Pima County Office of Medical Examiner in Tucson, Arizona. His office has recovered remains of 2,943 people who are believed to have been undocumented border crossers in the 18 years since 2000, from three Arizona counties. Humane Borders, which maintains a system of water stations in the Sonoran Desert, shows that from 1999 to 2018 it collected data on 3,339 migrant deaths. From January to July of 2019 it recovered 98 remains from the desert.

"We need to follow what Pope Francis says about the wall — remove the walls, build bridges, and reunite families," Arias said. "We also need more organizations like us where we have volunteers from both sides of the country to work for the same goal. We need to increase the number of people who think the same way as the pope, despite the fact that there might be others who think otherwise."

[Peter Tran is assistant director of the Redemptorist Renewal Center in Tucson, Arizona.] 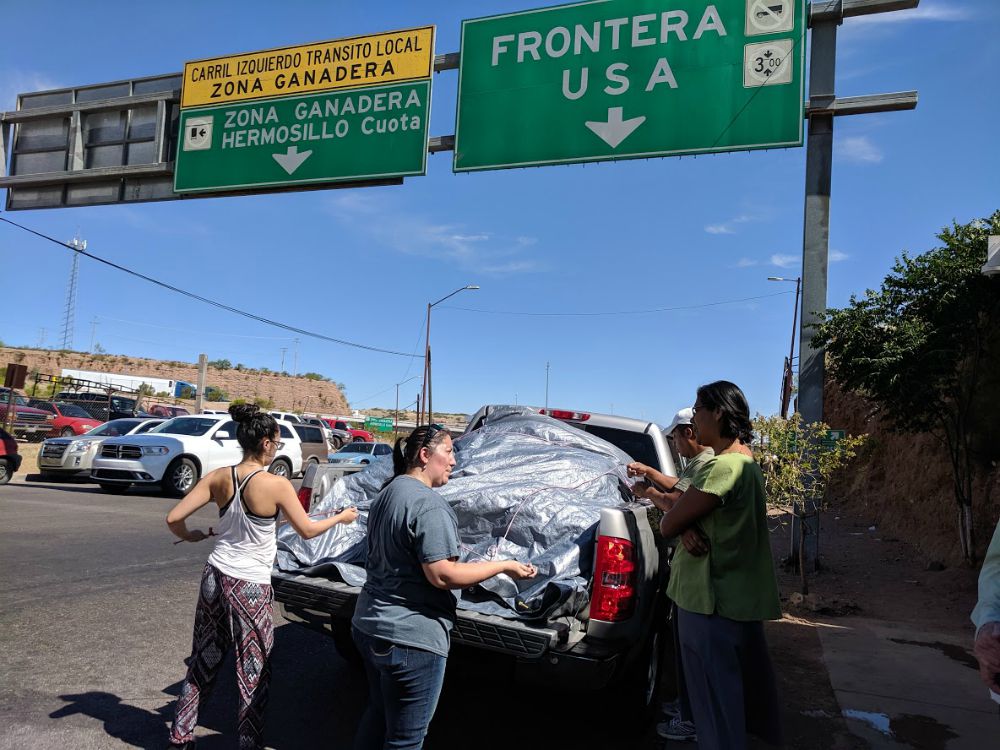 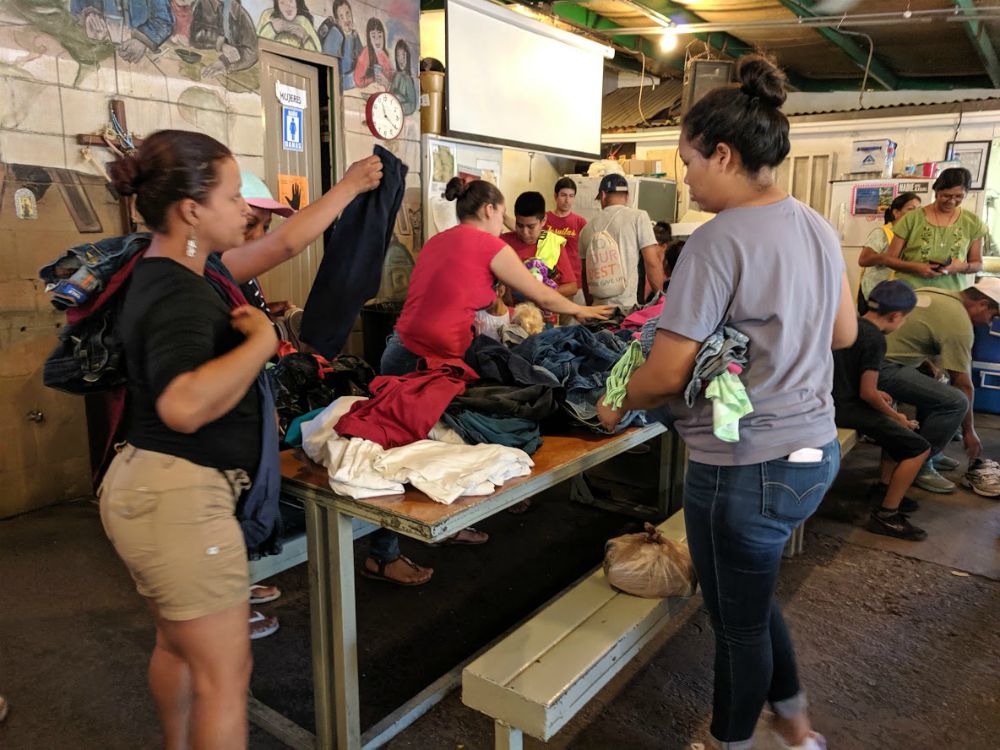 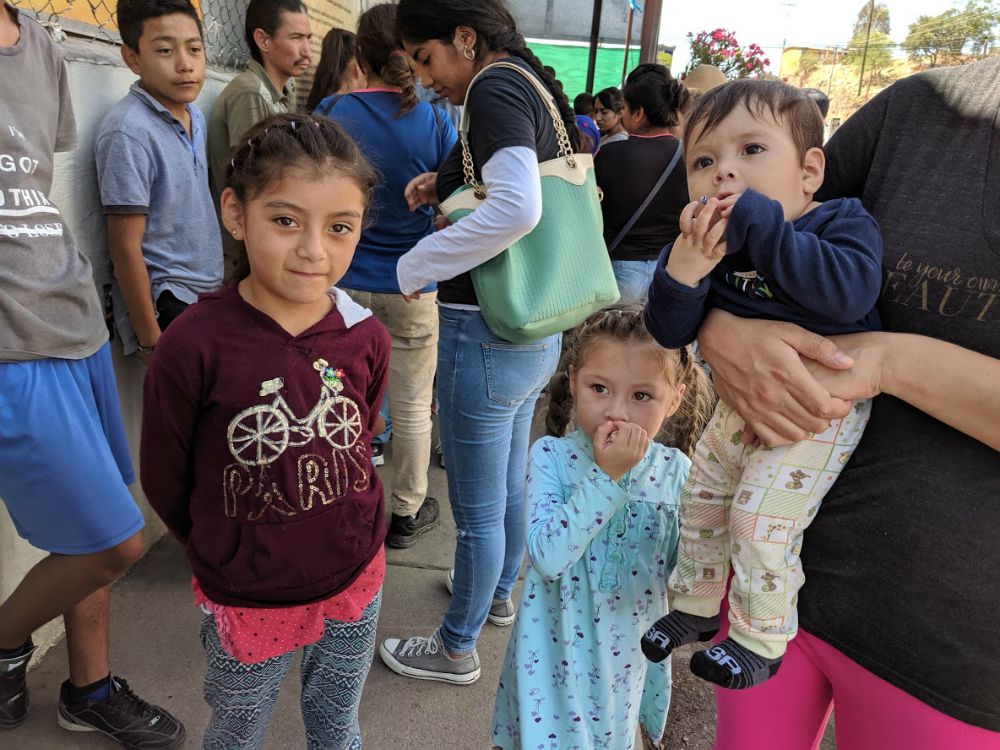 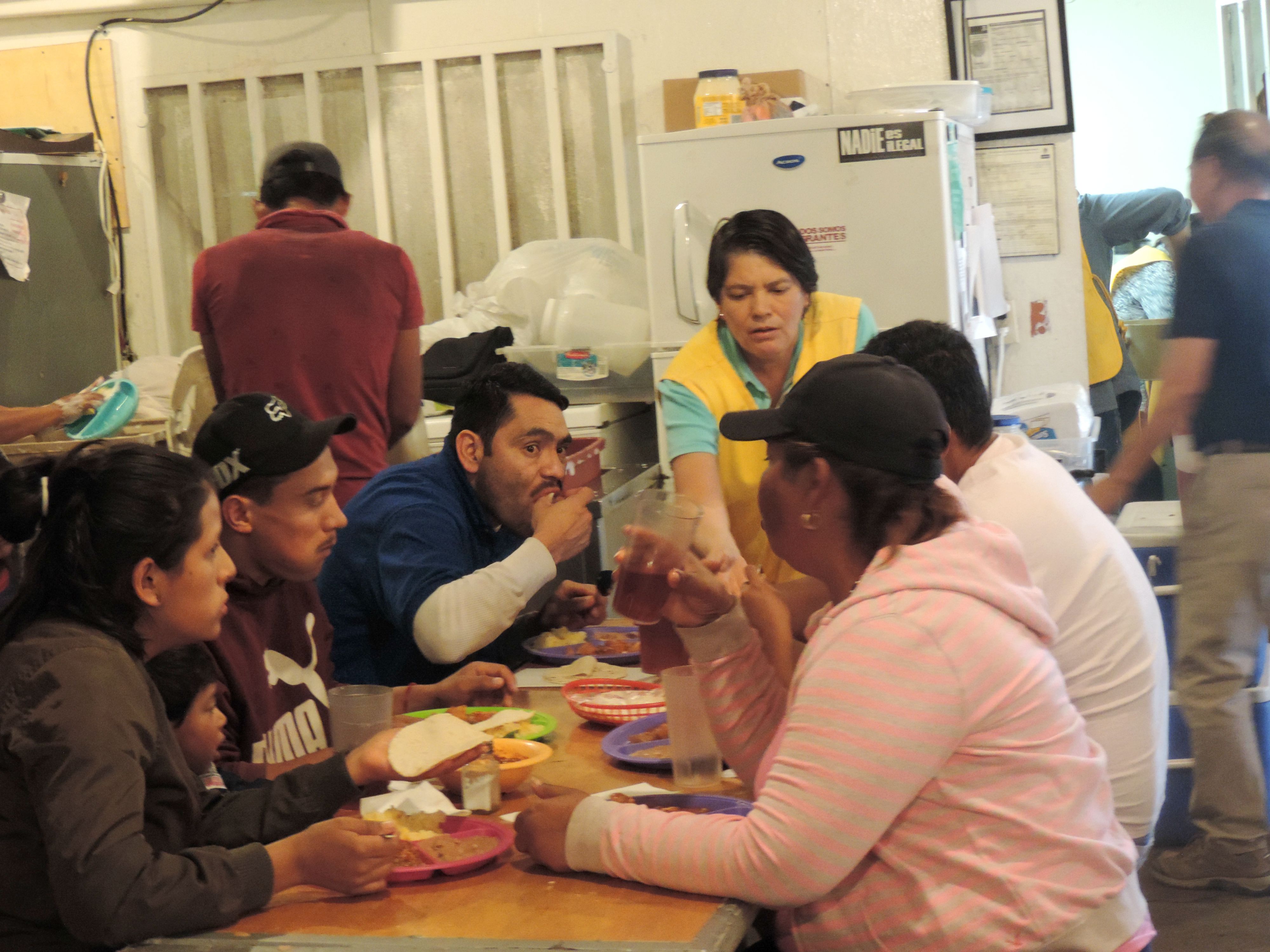 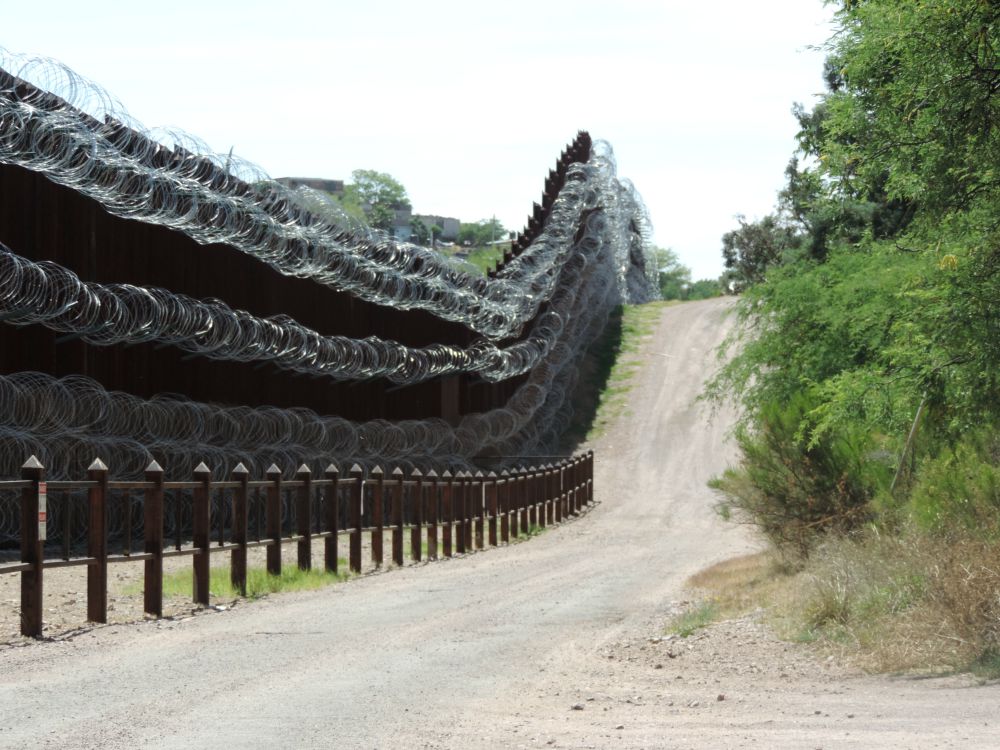