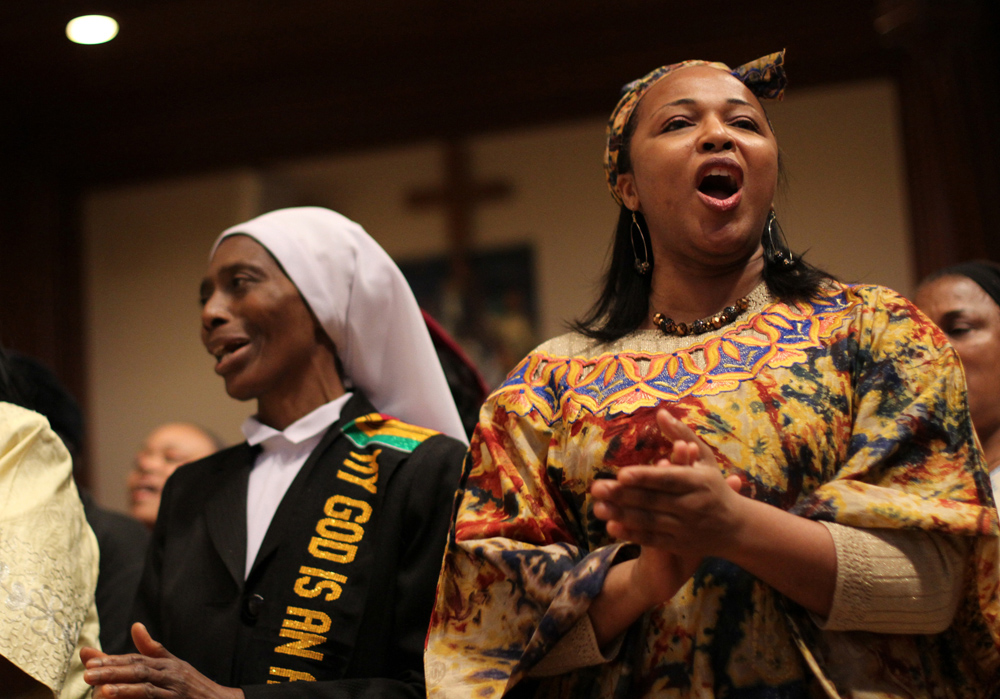 Sr. Agnes Toku, a member of the Handmaids of the Holy Child Jesus, and JoAnn Perou sing with the Sister Thea Bowman Gospel Choir during a Mass for Catholics of African ancestry at St. Agnes Cathedral in Rockville Centre, New York, Feb. 16, 2013. (CNS / Gregory A. Shemitz)

Pope Francis declared on June 11 that Fr. Augustus Tolton, the first African-American Catholic priest, lived a life of heroic virtue, a move that put a man who'd been born a slave one miracle away from being declared Blessed, the step before official sainthood. As Tolton (1854-1897) joins the dozen or so U.S. sainthood causes at this stage, his wasn't the only U.S.-based cause to advance last month, nor the only one dealing with racial issues in the United States.

The Diocese of Brooklyn completed the diocesan phase of the cause of Msgr. Bernard Quinn (1888-1940), a white priest who ministered to African-Americans, drawing the opposition of the Ku Klux Klan in the process. Still in the diocesan phase — in Jackson, Mississippi — is Sr. Thea Bowman (1937-1990), the first black member of the Franciscan Sisters of Perpetual Adoration, whose cause went before the U.S. bishops for consultation last November. The move brought Sister Thea's story full circle, as she famously addressed the U.S. bishops in 1989.

"Her demeanor, her positive love for our Church linked to her African-American heritage was inspiring," recalled Archbishop Wilton Gregory of Washington who, as an auxiliary bishop of Chicago from 1983-1993, met Sister Thea on numerous occasions.

Redemptorist Father Maurice Nutt, who is vice postulator of Bowman's cause and author of the book Thea Bowman: Faithful and Free, said the overwhelming reception by the bishops, nearly 30 years later, means the issues she embodied "are still essential and evident today." Nutt added that this confluence of sainthood causes related to African-American Catholics — who often feel like second-class citizens in their own church — means that God is calling everyone's attention to the role and witness of black Catholics.

Ministry | Sainthood causes of Thea Bowman and others draw focus to black Catholics, need for justice

During past year of COVID-19 disruption, US sisters connected online, continued ministries