The 2018 assembly for the Leadership Conference of Women Religious is picking up exactly where last year's meeting left off: with a call to communion inspired by 2017's Outstanding Leadership Award recipient, Carmelite Sr. Constance Fitzgerald.

Roughly 800 sisters in leadership in their respective communities will gather Aug. 7-10 in St. Louis to reflect on this year's theme: "Being the Presence of Love: The Power of Communion."

LCWR, which represents approximately 80 percent of about 48,500 women religious in the United States, sees "being the presence of love" as one of the most important roles of women religious in this era, said Sr. Annmarie Sanders of the Sisters, Servants of the Immaculate Heart of Mary, LCWR's associate director of communications.

"With all of the destruction of the earth and the suffering throughout the global community, the conference recognizes that we, as a planet, are at a significant crossroads and that a shift in consciousness is desperately needed so that the course of the world changes," she said. "The shift is toward becoming communities of greater love and inclusion. LCWR sees that contributing to the shift of consciousness is an imperative of this time and may be the most important contribution women religious could help make."

Sanders said the strong response to last year's assembly — which also focused on "being the presence of love" — is what kept that theme in play this year.

Hosting the assembly in St. Louis comes with an acute awareness of racial tensions across the country, LCWR leaders said, as the turning point for the Black Lives Matter movement began in 2014 with the death of Michael Brown and subsequent protests in nearby Ferguson, garnering national attention for the campaign.

Coupling a call to action against racism with the power of communion, LCWR will also be awarding the Outstanding Leadership Award to Sr. Anita Baird of the Daughters of the Heart of Mary, a vocal proponent of diversifying religious life who oversaw education on racism throughout the Chicago Archdiocese.

"We need to keep leaning into that insight, that we have to work through our own racism, because it's been leading to everything else around us," said Sr. Teresa Maya, a Sister of Charity of the Incarnate Word and president of LCWR. "There's a lot of similarity between each assembly, but the times, the people — we're starting to see a new moment emerge for religious life and for the conference."

Continuing the call for communion

In her closing comments after receiving the 2017 Outstanding Leadership Award, Fitzgerald posed an ongoing challenge for the conference:

May we be given the contemplative grace to cut deeper grooves of conscious relationality and communion in the evolutionary path we are treading so that others may follow. May we make our own evolutionary contribution toward laying down permanent capabilities for creative communion and cutting deep cosmic tendencies for transforming love and relationality into the universe. Prophets of communion! This is my dream for us, my sisters. It is your dream as well. It is what is in my heart.

Participants left the assembly with that dream and the desire to explore the concepts of Trinitarian theology Fitzgerald examined in her address, Sanders said.  "We're picking up Constance's challenge to us to understand how deep communion happens in the world and what our role as religious might be to help foster communion and transform our human condition in the world," she said.

Sr. Catherine Bertrand, a School Sister of Notre Dame and the assembly's facilitator, said the power of communion is far from "ethereal or an attempt to spiritualize what is critical." Rather, it's about finding a way to engage in a different manner with what's going on globally.

"My experience in the choosing of the theme and the response to it is very much in terms of the heartbreak of the world," she said. "It's never about sustaining ourselves or solving our own problems; it's always with very much the eye on the world, the planet. Certainly, I think, 'My gosh, was there ever a time where there was more of a need to look at the power of communion?' "

The assembly is also an opportunity to remind women religious that religious life is "not for ourselves," said St. Joseph Sr. Carol Zinn, who became executive director of LCWR on July 1.

"It is for the life of the world. Keeping the reality of our world in front of us when we're at the assembly is really critical."

'A number of voices'

Bertrand said every time the assembly comes to a new city, there's a heightened appreciation for what's going on there. And in St. Louis, racism is brought to the fore.

This year's resolution is a recommitment to the 2016 resolution, "believing that systemic racism gives rise to all kinds of injustice, which is of concern to us as women religious," said Sr. Ann Scholz, a School Sister of Notre Dame and LCWR's associate director for social mission.

On the final day of the assembly, drummers will lead assembly participants to pray at the old St. Louis courthouse where Dred Scott, a slave, sued for his freedom in 1846. Scholz said this is neither a rally nor a press conference: "It's simply an opportunity to put our bodies on the line and stand against racism."

Baird was chosen for the Outstanding Leadership Award particularly because of her role in addressing the root causes of racism, Sanders said.

Baird, one of the first African-American women to have a high position within the Chicago Archdiocese, helped people recognize their own often unconscious participation in racism and helped them "take steps to eradicate that from their own lives, communities and workplaces," Sanders said. Baird will give a speech at the banquet Aug. 10.

Three other keynote speakers will touch on communion at the assembly.

Benedictine Br. Simon Pedro Arnold is a Belgian professor of theology and communication sciences who has lived in Peru for more than 40 years, bringing both a European and Latin American perspective to the conversation.

Heidi Russell is an associate professor in the Institute of Pastoral Studies at Loyola University-Chicago. A single mother to two adopted children of color, Russell will "weave in some of her own personal experiences as a mother into this narrative of a call to deeper communion," Sanders said.

With an expertise in Trinitarian theology, St. Joseph Sr. Gloria Schaab will apply those concepts directly to religious life today and the structures within religious congregations. Schaab is a professor of systematic theology and chair of the department of theology and philosophy at Barry University, Miami.

This year, each keynote session will include all three speakers, with the primary speaker delivering his or her address for 30 minutes, followed by the other speakers giving five minutes of reflections on the keynote, "applying them to situations where there are fractures of communion in our world today," Sanders said.

After, a rotating panel of four LCWR members will reflect on the presentation as it applies to leadership in religious life. Sanders said this format brings together "a number of voices in each session, hopefully a reflection of communion today."

A look to the future

Though members of religious life are aging, Bertrand said, an exciting component of these assemblies is the reminder that "we're not dead yet," which Bertrand said she witnesses in her travels and meetings with congregations across the country.

"The very fact that there's an element of younger leaders who are also seeing that, you know, we can't possibly do leadership in the same way, we cannot go forward with the same kind of governance structures — those conversations are bubbling up more and more in terms of what's being asked of us now and if we dare to make the changes needed to be who we most want to be," she said.

Zinn said the current restructuring of LCWR involves outsourcing duties sisters historically took on (such as administration or finance) as well as changing the makeup of the board.

Rather than having the chairperson of each of the 15 regions make up the board, LCWR members decided there would be an election of board members across the country, Zinn said. LCWR members have already voted on the new board members, who met for the first time at a board meeting in February.*

This move will diversify the skillset and experiences of the board members, allowing it to "reflect the reality of the conference and also provide the resources for the organization to move forward," Zinn said.

"There's a lot of energy around: How do we rethink, retool, reimagine and restructure so we can address the transformational movement that's happening in religious life?" she said.

Since last year's assembly, the country has experienced natural disasters, the #MeToo campaign, and refugee and immigration crises, Maya noted.

"Those experiences of this year are calling forth the best in all of us and also making us aware that everything that is out there needs to be addressed by community," Maya said. "Not by heroic individuals, but community."

Inspired by the collaborative nature of those affected by Hurricane Harvey, Maya said she learned "there's something innate in every human being to help one another in their time of need," recalling locals who brought out their own boats and trucks to save one another.

"The idea is that a great need also requires a great response, and it has to be a response of communion and collaboration ... The times around us require that we come together for the common good," she said.

Maya will deliver her presidential address before transitioning into past-president, with Holy Cross Sr. Sharlet Wagner succeeding as president. The assembly will choose a new president-elect Aug. 9.

"There's a feeling of momentum, energy, excitement about what we can do for one another. The key word here is collaboration," Maya said. "We're all learning that the future is in collaboration."

*An earlier version of this story gave an incorrect meeting date.

[Soli Salgado is a staff writer for Global Sister Report. Her email address is ssalgado@ncronline.org. Follow her on Twitter: @soli_salgado.] 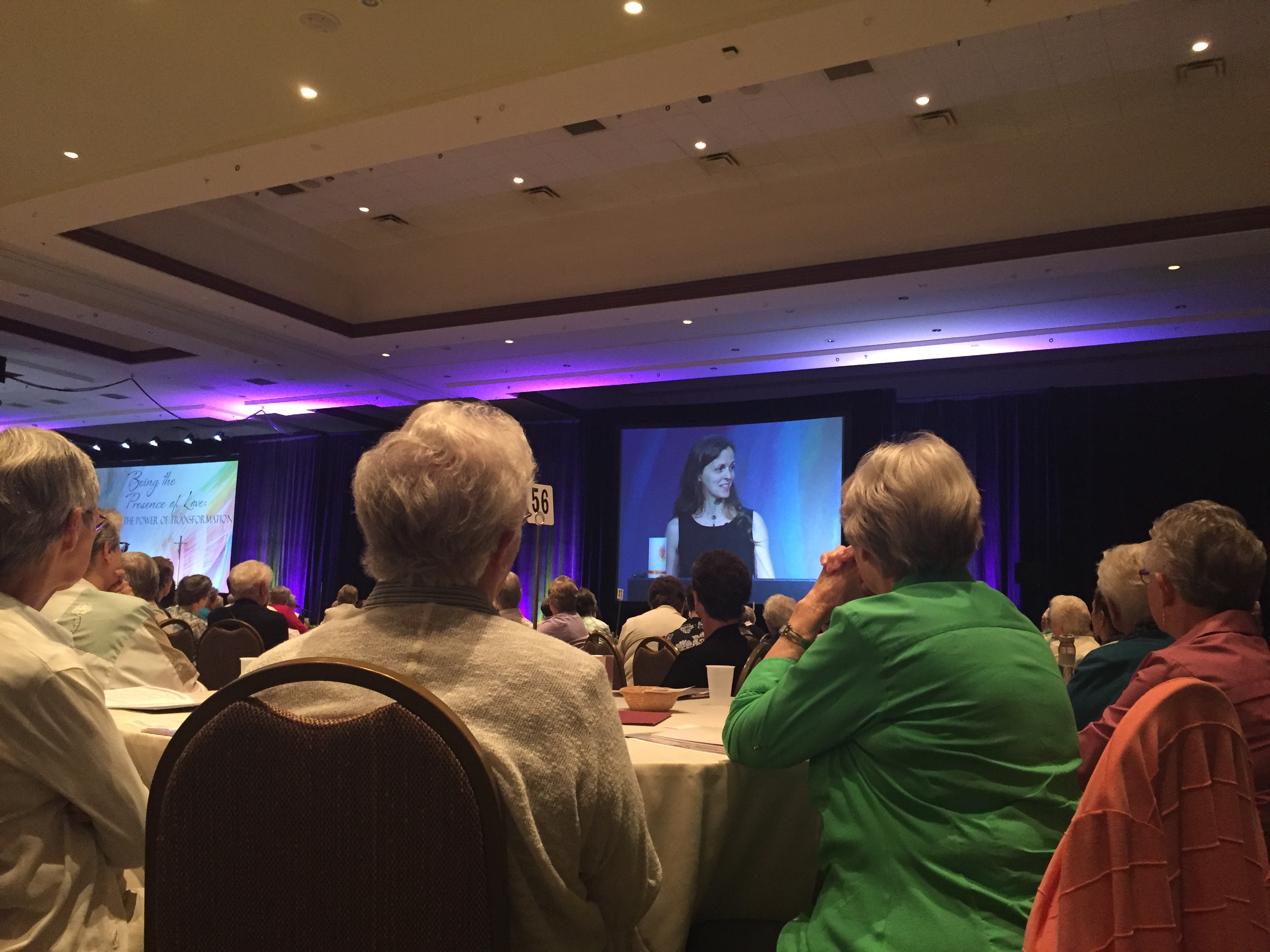