America's prisons: 'Throwaway people' and the sisters who care for them

• Read Part 1 of the series, America's prisons: Working to change mass incarceration and the racism behind it

• Read Part 3 of the series, America's prisons: How life after prison is a caste system

• Read Part 4 of the series, America's prisons: What's changed and what's next 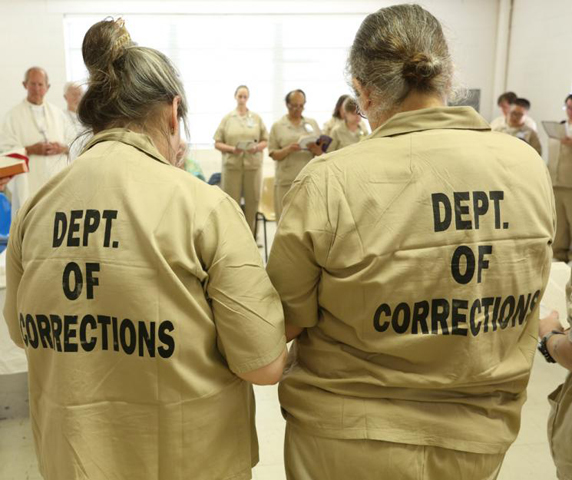 Editor's note: This is Part 2 of a series on the U.S. prison system and sisters who work with current and former inmates and advocate for a change in policies. Read Part 1, Part 3 and Part 4.

Providence Sr. Joan Campbell was a prison chaplain in Washington and northern California for 40 years. In those four decades, she became the first female president of the American Catholic Correctional Chaplains Association and, in that capacity, went to the Vatican to discuss mass incarceration with Pope John Paul II.

But for all of that, it's a story from Campbell's chaplaincy internship that most sticks with her.

She was showing Franco Zeffirelli's 1977 miniseries "Jesus of Nazareth" to a group of inmates in a psychiatric ward, and when it came to the scene where the crucified Christ promises a thief that they will be together in paradise, Campbell said one of the inmates lost it.

"He started crying out loud, so I went over and put my arm around him," she said. "He said to me, 'I knew I was going to hell, but to think that an inmate was the first one that went up to heaven! You mean there's some hope for me?' "

Stories like this come up a lot when you talk to the Catholic sisters across the United States serving in prison and jail ministries. The United States isn't jailing hardened criminals; it's jailing "the least of these." It's jailing people who've committed nonviolent offenses, and many of these offenses stem from poverty, drug addictions and mental illness. That's one reason why women religious nationwide have taken on criminal justice reform as a ministry, including advocating for legislative reforms, caring for inmates, and helping former convicts start anew.

The United States herds millions of people through its correctional facilities each year, most of them black men, but many from other marginalized populations. An estimated 65 percent of inmates have drug or alcohol addictions, and Marc Mauer, executive director of The Sentencing Project, told Global Sisters Report that the rate at which low-income white women are being jailed is rapidly growing. Meanwhile, the country's largest private prison company, Corrections Corporation of America, reports that last year's revenue increase came from holding Central American asylum-seekers in Dilley, Texas.

Society has taught inmates that they're "throwaway people," says St. Joseph of Carondelet Sr. Baya Clare. And so, she says, a lot of inmate care is simply reminding people that they are made in the image of God. 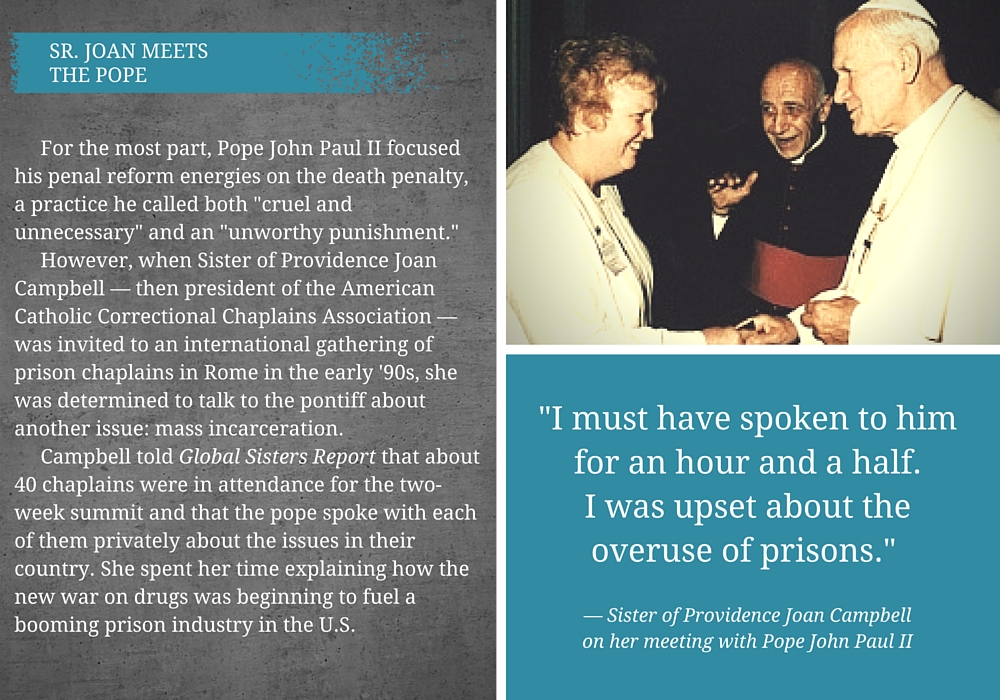 Every week, Clare and fellow St. Joseph of Carondelet Sr. Ruth Brooker drive 80 miles from St. Paul, Minnesota, to the women's federal prison in Waseca, where they teach a course on spiritual goals. Clare said when the women learn how far the sisters travel to get to them, they're often incredulous that they could be worth such a trip.

"For some of them, that's a revelation — that just even though they made these mistakes, however egregious, they're still people with dignity," Clare said.

Many criminal justice activists describe the current prison system this way: Rather than provide support services for the (mostly nonwhite) economically poor, mentally ill and addicted, they are just put in cages and expected to cure themselves.

According to a recent report from the National Center on Addiction and Substance Abuse, of the $74 billion that federal, state and local governments spent in 2005 incarcerating those who committed drug offenses, less than 1 percent of that money went toward drug education and treatment. A 2014 report from the Treatment Advocacy Center found that while more than 350,000 people with serious mental illnesses like schizophrenia and bipolar disorder were incarcerated in 2012 in state prisons and county jails, most of these facilities were not equipped to handle mental illness. Many were unable to provide psychiatric medications.

Alfredo Cruz went to prison for second-degree murder in 1986, and he told GSR that even violent offenders are left to their own devices when it comes to rehabilitation.

"They kind of throw you in the yard and tell you to fix yourself," he said. "And then over a decade later, when you start appearing for parole hearings, they almost want to punish you for not having any insight. Well, they've never given you the tools to investigate that about yourself."

The availability of rehabilitation services in U.S. prisons isn't uniform. Some prisons have more money for them than others, so what's offered usually depends on what private groups in the area are able and willing to provide services to inmates. Still, Clare says that even when prison-sponsored services are available, the whole system illustrates how the United States misunderstands mental illness and addiction.

Clare said at the Waseca prison, she's met countless women who needed psychological help, not punishment — including, once, a woman who was hearing voices. "That's kind of how we're dealing with these things in United States now, by putting people in prison," Clare said. "And they have pretty good addiction treatment staff in the federal prison system, but why should it require getting a felony conviction to get that?"

In 2005, then-47-year-old Loren May was sentenced to 21 years and 10 months in federal prison for a first-time drug offense. He'd been a drug addict for more almost 30 years when he was convicted, and he told GSR he would often inject and smoke crack at the same time. He also drank.

May got sober in prison, but he says it wasn't because of any substance-abuse programs the system offered.

"Jesus changed my life when I went in there," he said. "I stopped smoking cigarettes, I stopped doing drugs and I stopped drinking. I ain't looked back since." 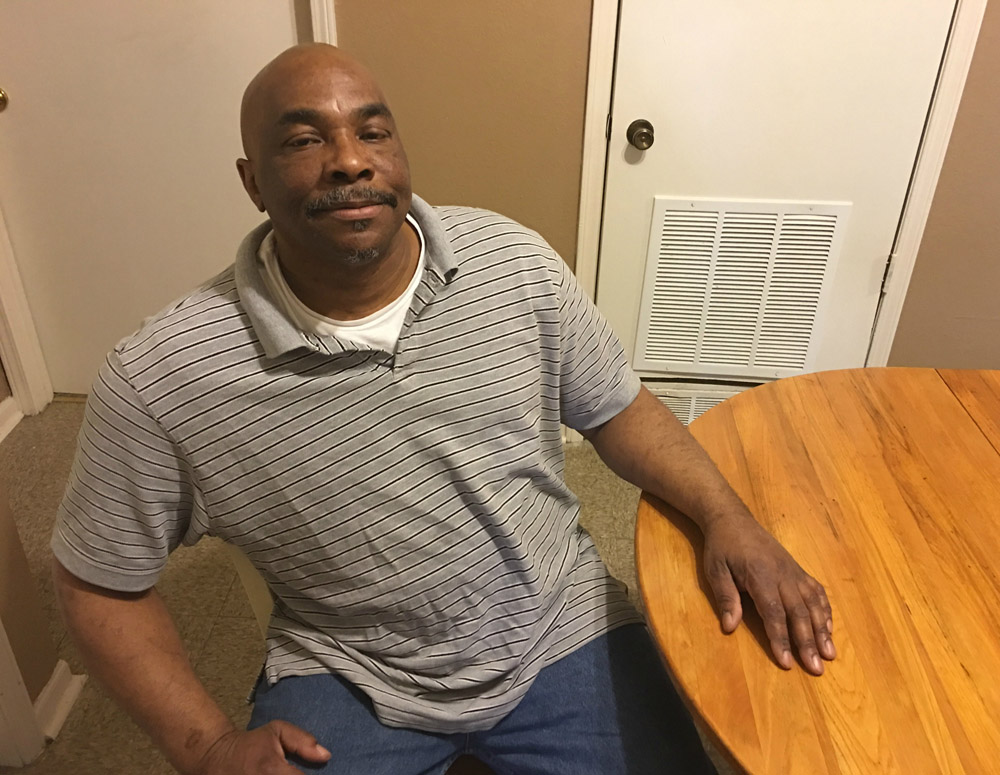 Loren May sits in his apartment on the northeast side of Kansas City, Missouri. It's the second apartment he's had since leaving prison in 2014. He and his fiancée, Ira, maintain a 'prayer wall' in their dining room — a photo collage of all their many blessings. (GSR photo / Dawn Araujo-Hawkins)

Clare says decadeslong sentences like May's are "egregious" and of no benefit to either inmates or to the taxpayers paying billions of dollars each year to keep them behind bars — even if support programs are offered in a prison, which isn't always the case.

"I think sometimes going to prison can be helpful to people because it stops their trajectory, but I can't see that spending more than five years actually helps anybody," Clare said. "By the end of five years, you've done all the programming, you've taken all the classes, and either you got it or you didn't. There are a lot of people in prison who just don't need to be there anymore."

Yet according to data from the Federal Bureau of Prisons, almost half of the people in federal prison are serving sentences of at least 10 years. In 2013, the average federal prison sentence for drug offenders was 11 years.

There are even long periods of detention in jails, which, unlike prisons, are only meant to be temporary holding facilities for people awaiting a court date. And yet, Sister of St. Francis of Mary Immaculate Vivian Whitehead, founder of the Center for Correctional Concerns in Joliet, Illinois, says system flaws can keep some people in jail for years. 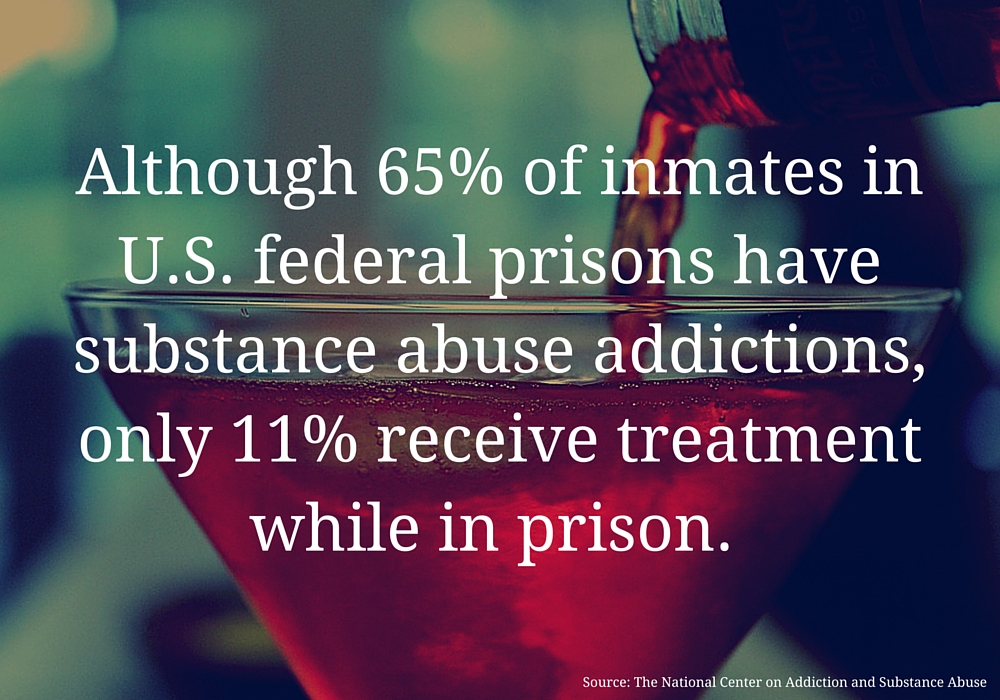 "Jails are warehousing the mentally ill and homeless; jails exist primarily for the accused who are indigent," she said. "Most people in jail are waiting to go to court because they're too poor for bond money to release them until trial."

Whitehead said while most of the people in the jail where she ministers are there for drug possession, more and more are being jailed for minor traffic violations.

The Joliet Franciscans have been caring for local inmates since 1887. In the early 20th century, the sisters taught elementary school subjects, music and shorthand to women in the Stateville Penitentiary, and in the 1940s, the sisters provided choral music for Mass at the prison. Whitehead founded her organization in 1979, and since then, she and her 10-person staff have helped more than 1,800 men and women in the Will County Jail earn GED diplomas. 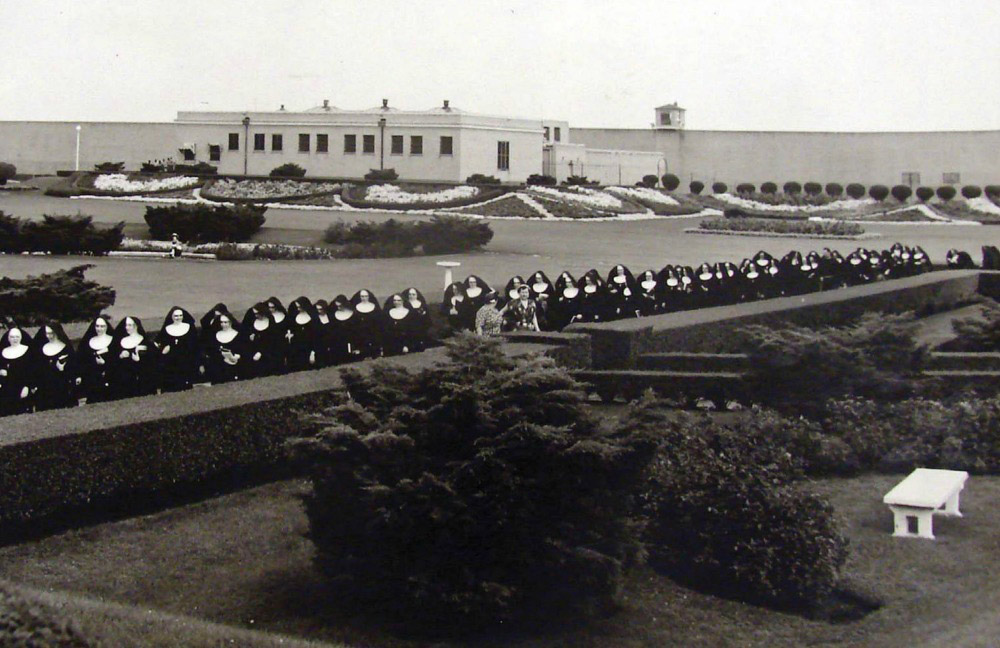 Sisters of St. Francis of Mary Immaculate leave the Stateville Penitentiary in Joliet, Illinois, in 1954. The sisters began to minister to Joliet inmates in 1887, teaching classes and eventually also singing in the choir for Mass at the prison. (Provided photo) 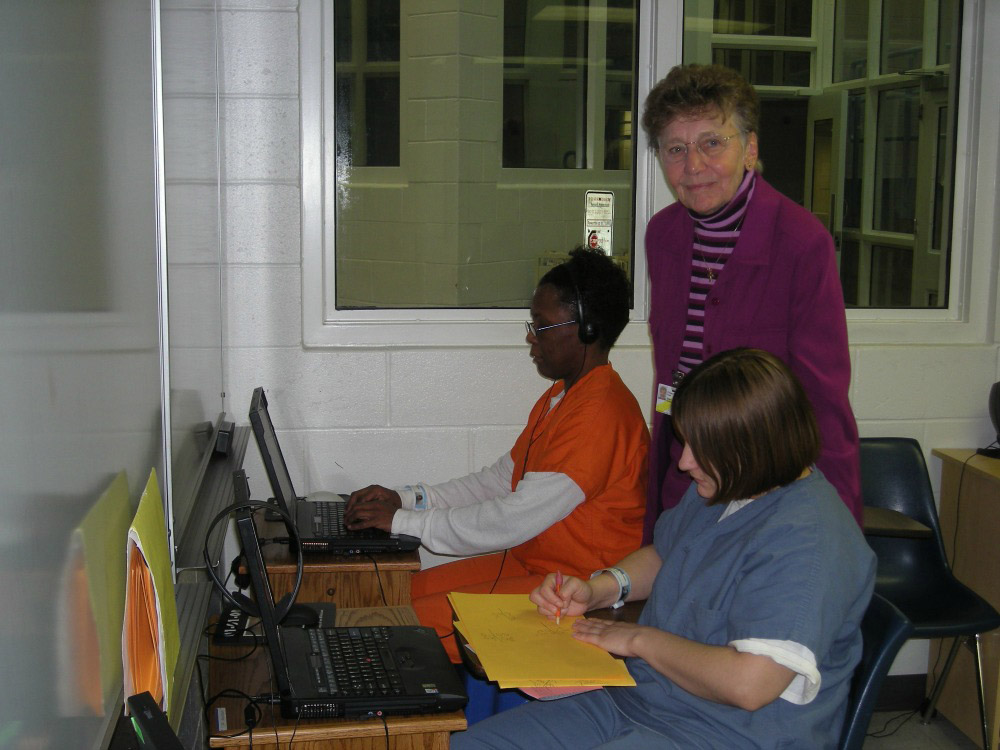 Some criminal justice activists argue that jails have essentially become debtors' prisons, a concept the United States abolished more than a century ago and that the Supreme Court ruled unconstitutional in 1983. However, it's not unusual for someone who is unable to post bond to incur additional court fines and fees while he sits in jail. When he finally is released, he may be surprised to find that there's a warrant out for his arrest because he didn't pay his court fines while he was in jail.

Loren May knows all too well how broken the system is.

When May was sentenced to almost 22 years in prison, it wasn't for anything he'd actually done. A friend of one of May's sons was facing 30 years to life for his own drug charge, and prosecutors offered him a reduced sentence if he could name other drug dealers he knew. He named May, three of May's sons, and a slew of other people. May refused to take a plea bargain, so he went to trial, where he was convicted not for selling drugs, but for conspiracy to distribute crack cocaine — that is, he was convicted for knowing people who sold drugs.

Ultimately, May served only nine years of his sentence. He says he spent his entire incarceration learning federal drug laws "like the back of my hand," and with that knowledge, he was not only able to reduce his own sentence, but also the sentences of his sons.

Today, May and his fiancée, Ira, live in a two-bedroom apartment on the northeast side of Kansas City, Missouri. May works as a night monitor and medical technician at a transitional house for homeless veterans, and he does janitorial work in his neighborhood on the side to make extra money. He said he plans to also become a licensed drug and alcohol counselor.

"I'm not planning on going back to jail," he said. "I don't want to do drugs or smoke cigarettes or drink alcohol. I want to do better for my life."

Ministry | America's prisons: 'Throwaway people' and the sisters who care for them

Q & A with Sr. Donna Marie Paolini on creating a space for solitude

The church provides hope in Chad