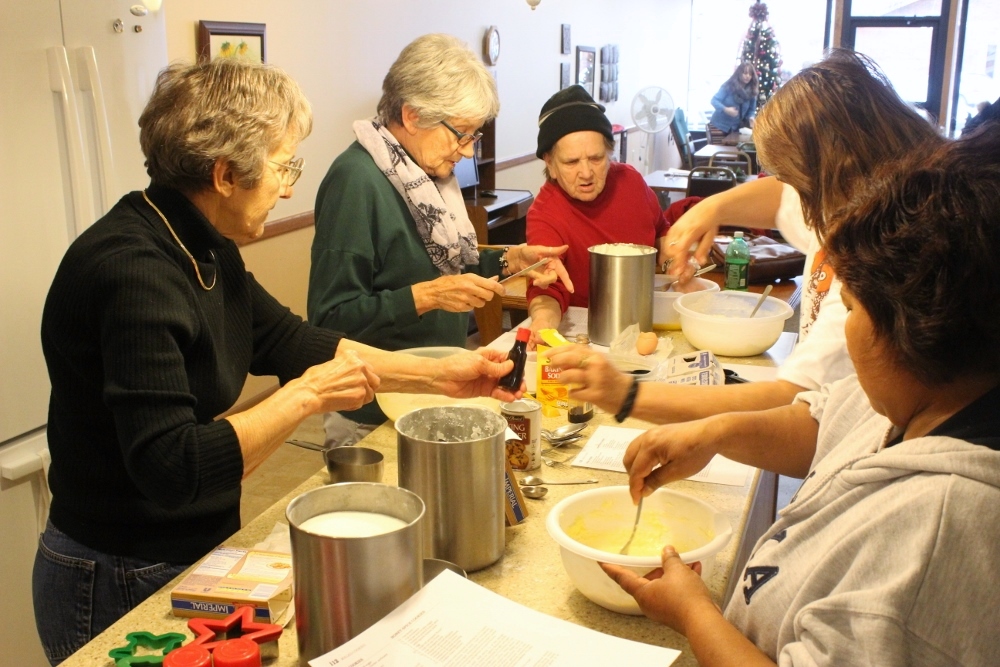 Baking class at Neighbor to Neighbor, downtown day center for women that just might be the Sisters of St. Joseph’s most popular Concordia ministry. (Nicholas Sciarappa)

Concordia, Kansas — Even though the city of Concordia is situated squarely in rural Kansas, it isn’t a farmers’ town anymore. Agriculture still plays a big role, to be sure – it’s the single largest sector of Concordia’s economy – but it isn’t the largest source of employment now that new technologies have made it possible for farmers to manage bigger and bigger farms with fewer and fewer people.

It’s like that in many rural populations across the country. In a 2006 researchers at the Carsey Institute, a public policy think tank at the University of New Hampshire wrote, “For every rural place that depends on an agricultural economy, there are six more in which manufacturing is the economic mainstay and two more in which federal or state government is the largest employer.”

And so, like other rural communities, Concordia has transformed over the last century. There’s less open land and more construction. And instead of working for the family farm, the city’s 5,400 residents now work for the hospital, the Super Wal-Mart or the Alstom metal fabricating plant – those who stay, anyway. Concordia has not been immune to the rural brain drain, and its population has been slowly shrinking for decades.

One constant in Concordia, however, has been the Sisters of St. Joseph. They’ve been in Concordia for more than 130 years and in the last seven, they’ve redoubled their dedication to the city – the 28 or so sisters still in active ministry there creating new and innovative ministries for the people of Concordia.

Driving along the strip of U.S. Highway 81 that leads into the city, it’s hard not to notice the sisters’ massive Nazareth motherhouse in the distance. Its tower looms above fast food restaurants and motels lining the highway, and it seems that if the motherhouse isn’t the tallest building in Concordia, it certainly must be one of them. 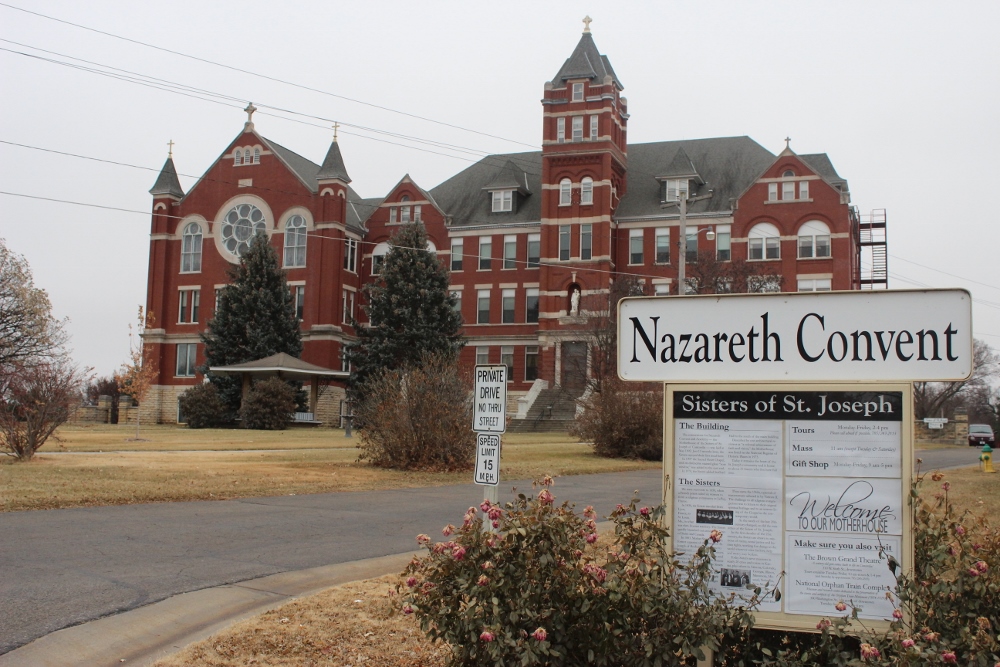 The motherhouse of the Sisters of St. Joseph of Concordia is one of the largest buildings in the town of 5,400 residents. (Nicholas Sciarappa) 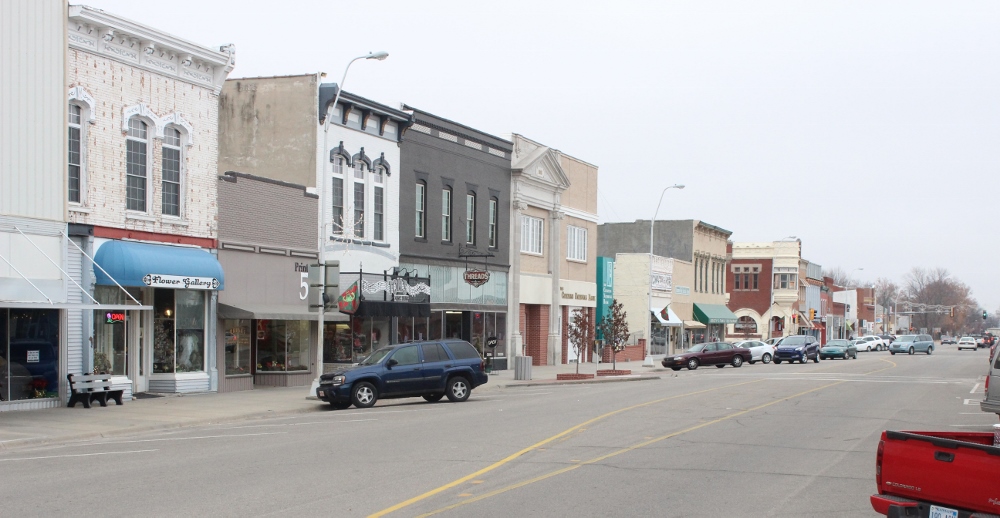 The five-story motherhouse was built in 1902, even though the Sisters of St. Joseph came to Concordia in 1884 – back when it was still a frontier town and the bank was only six years old. In 1883, the sisters had built a school in Newton, Kansas, and their plan was to build both a convent and a school in Concordia. It was expected that the sisters’ teaching services would be in great demand in there; in the late 1800s, Concordia was booming, and it was expected to continue growing and the railroads and Manifest Destiny kept carrying settlers west.

“At the time we came, Concordia was promising to be a communications and transportations center,” said Sr. Marcia Allen, current president of the Sister of St. Joseph of Concordia. “And then, of course, the drought and economic bust of the 1890s changed everything, and all the railroads went to Salina,” – 50 miles south – “but we stayed here anyway.”

The sisters not only stayed in Concordia, they all but kept the fledgling city running.

True to their charism of loving their neighbors, the Sisters of St. Joseph dedicated themselves to their new rural home: They opened Concordia’s first and only hospital in their original motherhouse (the Nazareth motherhouse was built because they had outgrown the first one); they started a girls academy and staffed the downtown elementary school.

Of course, as Concordia changed, as the nature of religious life changed, so too did the sisters’ work. The Second Vatican Council gave the sisters the opportunity to explore ministries outside of nursing and teaching, and they did. Today they don’t run any schools, and in 1985 they gave up ownership of the hospital, which would ultimately became the independent Cloud County Community Health Center. 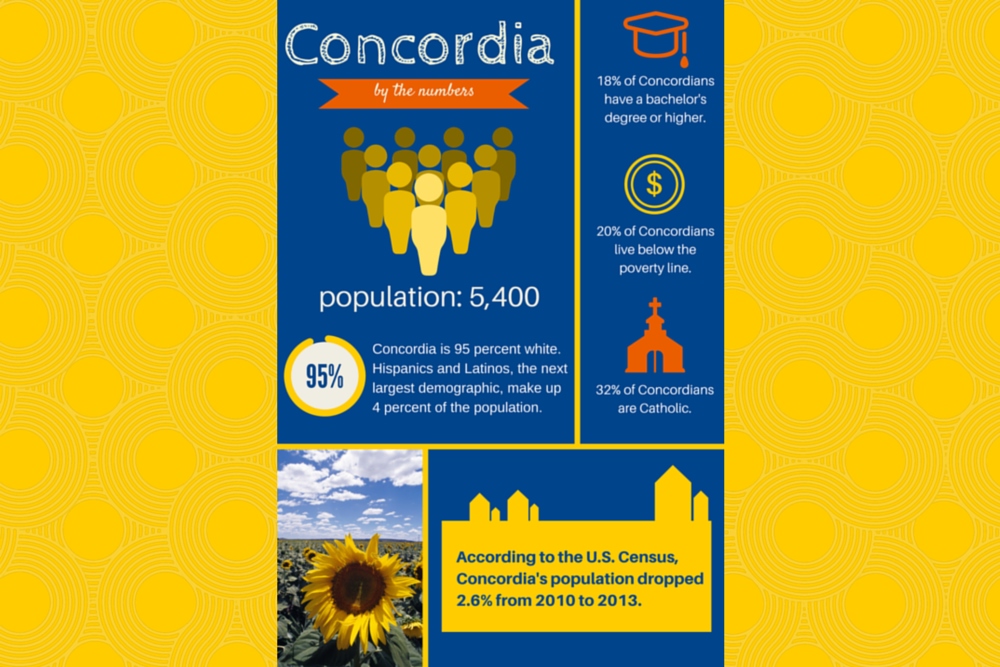 The sisters remain a vital part of Concordia life, their ministries so entwined with the city’s well-being that in in 2012, the publisher of the Concordia paper penned an open thank you letter to the sisters, stating that “many of the progressive projects in Concordia could not have come to fruition without the support of the Sisters.”

In the decades following Vatican II, the sisters dove into apostolic work, opening the Manna House of Prayer in 1978 – a retreat center that doubles as a food bank and temporary shelter for anyone ineligible for other forms of assistance – and in the ‘80s, they harbored and helped some 60 refugees who had fled Central America’s bloody wars, all while publicly protesting the United States’ policy of deporting those same refugees.

As far as Concordia City Manager Larry Uri can remember, these demonstrations are the only ones Concordia’s seen in at least 39 years, which gets to his larger point about the sisters’ involvement in the city: “I think, in a larger sense, the sisters are very much a part of the social conscience of the community,” he said.

In 2008, after a period of discerning about their future, the Sisters of St. Joseph decided to take being a good neighbor to the next level, proactively partnering with the city in an effort to address the felt needs of a community where 20 percent of the population lives under the poverty line. It was an interesting move, bucking the trend of other congregations in rural Kansas that, facing their own dwindling numbers, have either consolidated or left the state altogether. 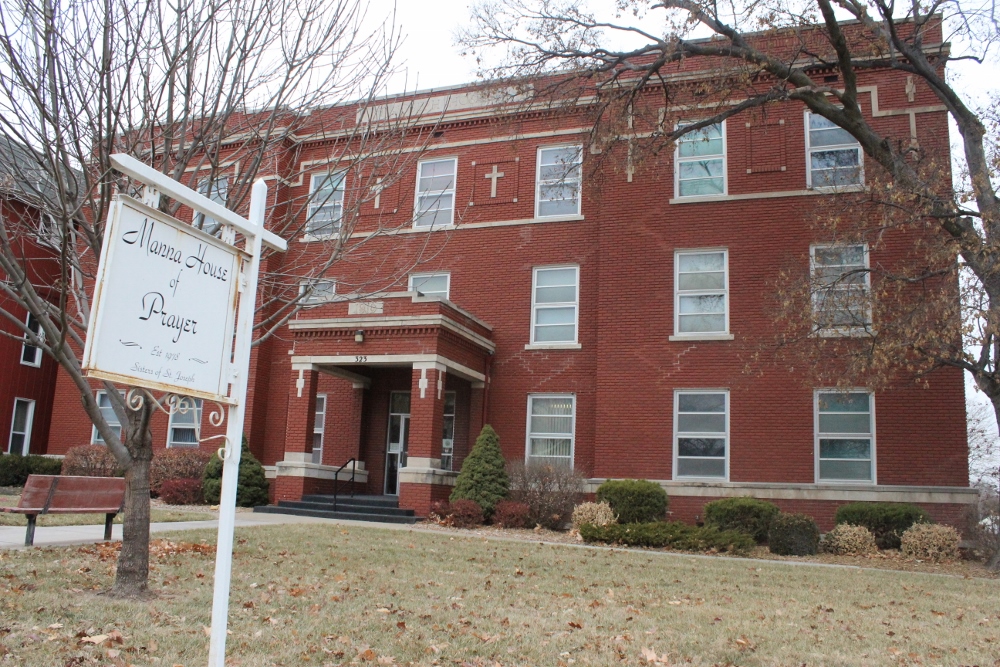 In the decades following Vatican II, the Sisters of St. Joseph dove into apostolic work in Concordia, opening the Manna House of Prayer in 1978 – a retreat center that doubles as a food bank and temporary shelter for anyone ineligible for other forms of assistance. (Nicholas Sciarappa)

The Sisters of St. Joseph’s new mission began with a series of interviews, a crash course in asset-based community development. They met individually with representatives from every social agency in Concordia they could think of: the police department, the Domestic Violence Association of Central Kansas, the Court Appointed Special Advocates for Children. They met with the superintendent of the Concordia Unified School District and the president of Cloud Community College.

After all the interviews were completed, Sr. Jean Rosemarynoski, the congregation’s vice president, put together a PowerPoint presentation of all the information the sisters had gleaned and invited the agencies to the motherhouse for a working lunch.

“She showed that PowerPoint and how, basically everybody had the same ideas about what the town needed,” Sr. Marcia Allen said, and thus the Community Needs Resource Forum was born.

Now, the social agencies and local government officials meet regularly for lunch at the motherhouse, sharing ideas and finding ways to collaborate. A sampling of the projects they’ve completed in the last six years includes expanding the public bus system between Concordia and Salina, launching a program to help families find ways out of poverty, and initiating the Concordia Year of Peace, in which residents sign an annual civility pledge. Forum attendees are currently brainstorming ways to address domestic violence in Concordia. 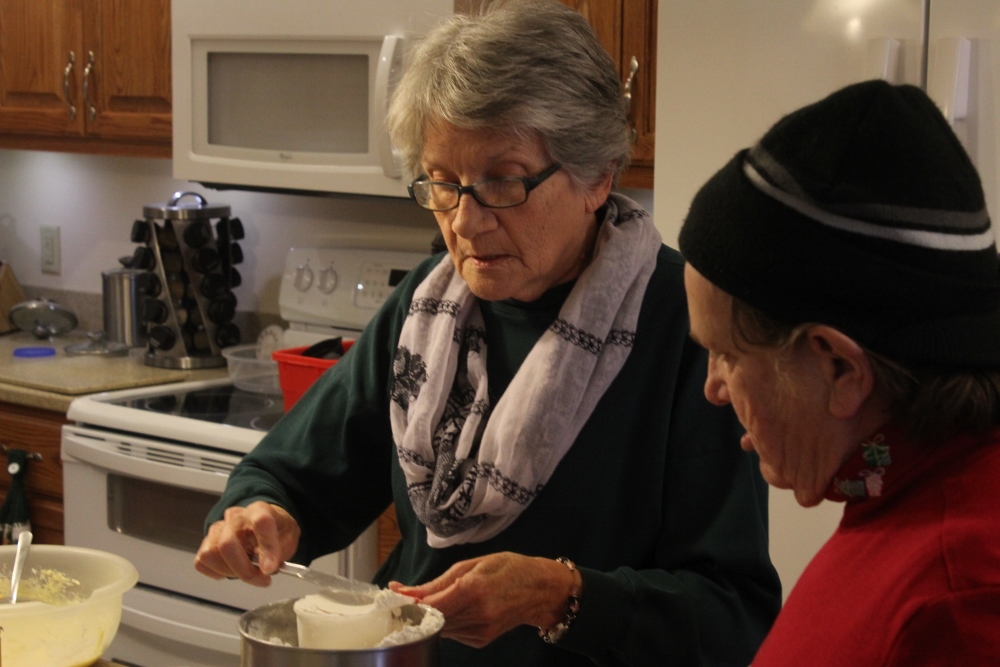 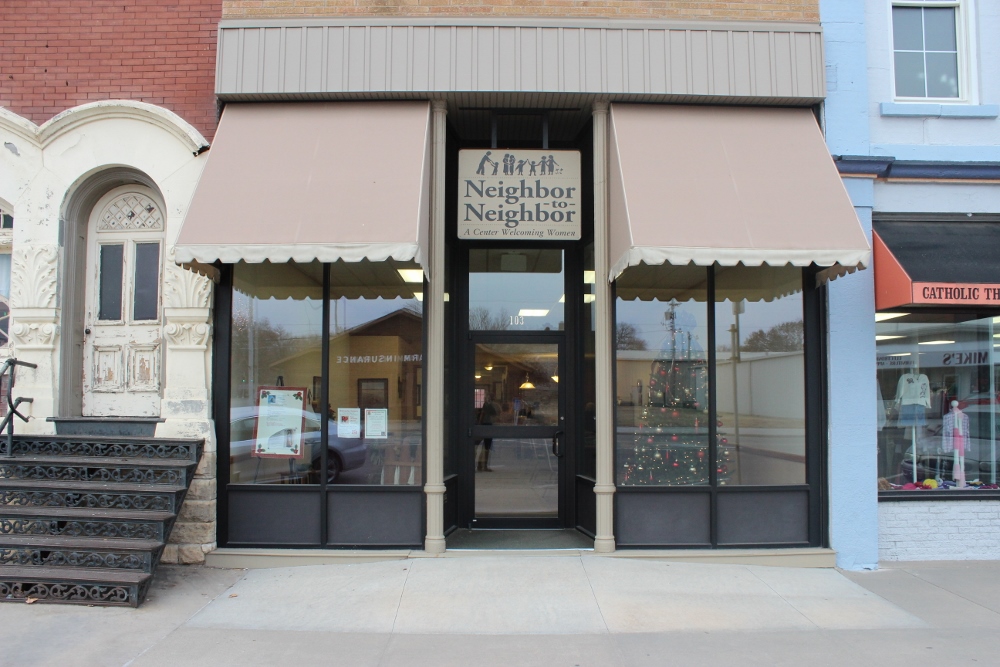 The cheerful storefront of Neighbor to Neighbor, 103 E. Sixth St., downtown Concordia, was decorated with a Christmas tree in December. (Nick Sciarappa)

But perhaps the most notable change in the last few years has been the sisters’ increased visibility and openness. In addition to the monthly Community Needs Resource Forum lunches, the motherhouse is now the site of a community garden, and the indoor pool is available for public use. The sisters even put a parking lot on the south side of the motherhouse that’s just for the public.

“I think the sisters have always maintained a supportive position in the community,” Uri said, “and before they undertook some of these other things, they were quietly lending a hand to the less privileged people in the community, but they've been much more visible about it in recent years.”

“It seems to me that their philosophy has changed,” she said. “They’ve made the motherhouse more accessible, and there’s just a lot that wouldn’t have happened when I first came to town in 1969. I think they want to do more local things like Neighbor to Neighbor.”

Neighbor to Neighbor, a downtown day center for women, just might be the Sisters of St. Joseph’s most popular Concordia ministry. The center will only be five years old in May, but you can’t go anywhere in town without hearing about it.

One woman who’d had a stroke and lost the will to live, found it again after coming to Neighbor to Neighbor for painting classes. Another woman, a quadriplegic immigrant from Mexico, learned to stand with a walker and to feed herself after doing exercises at Neighbor to Neighbor. Others have forged deep friendships with women they’ve met there, creating support systems where they’d formerly had none.

Neighbor to Neighbor is the brainchild of three retired Sisters of St. Joseph – Jean Befort, Pat McLennon and Ramona Medina. Their goal was to have a place where local women – of any background – could learn new skills and simply be together; so they bought an abandoned appliance shop in downtown Concordia and turned it into a communal space with a full kitchen, an art room and an upstairs playroom for kids.

Five days a week, the sisters are in their storefront center, ready to welcome any woman who wants to learn to sew or paint or bake, or who just needs a quiet place to study while someone looks after her children. Neighbor to Neighbor even has a resident mascot, a miniature schnauzer named Sophie – a donation just like everything else in the center. 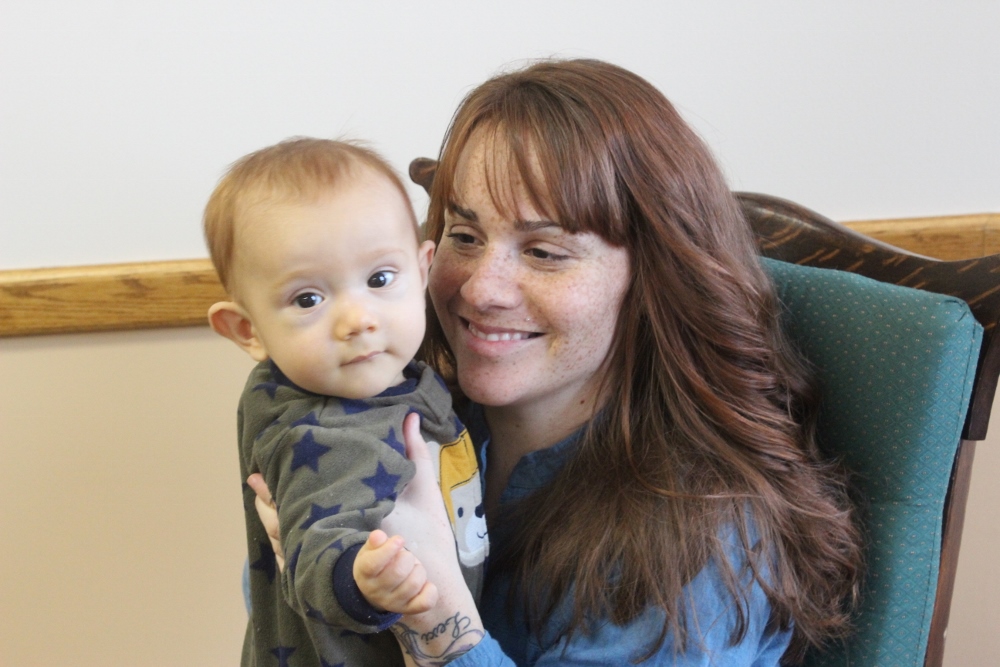 Ruby Genereux and her son Clark. Generaux has been coming to Neighbor to Neighbor since it opened, almost five years ago. (Nicholas Sciarappa) 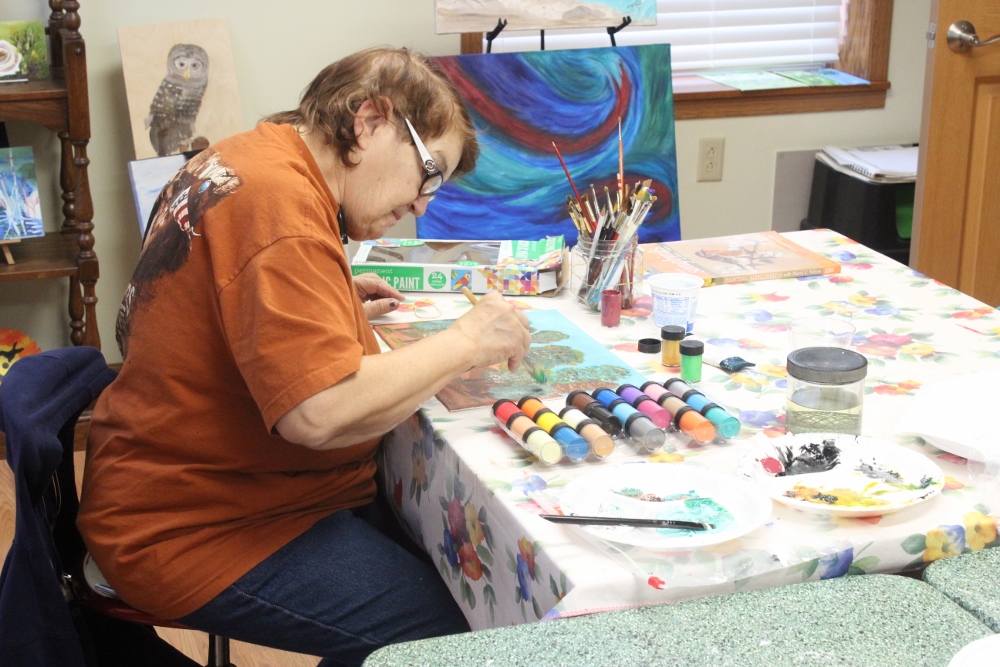 A Concordia resident paints at Neighbor to Neighbor. (Nicholas Sciarappa)

“We get donations from all the churches around, pretty often,” McLennon said during a tour of the playroom, itself a donation her family made in memory of her mother, who loved children. “The thrift shop next door, they give us $500 a month, and that money pays for the utilities each month, which is a big thing.”

Twice a week, the center gets food donations from a local restaurant and the Rotary Club, which allows them to serve daily lunch.

Genereux has since gotten married and had two more kids. She doesn’t need to do her laundry at Neighbor to Neighbor anymore, but she says she sticks around because of the sisters.

“I think the primary benefit of a place like this is probably the type of love that you get here from the sisters,” she said, bouncing her 7-month-old son, Clark, on her knee while sitting in Neighbor to Neighbor’s front room. “It’s unconditional.” 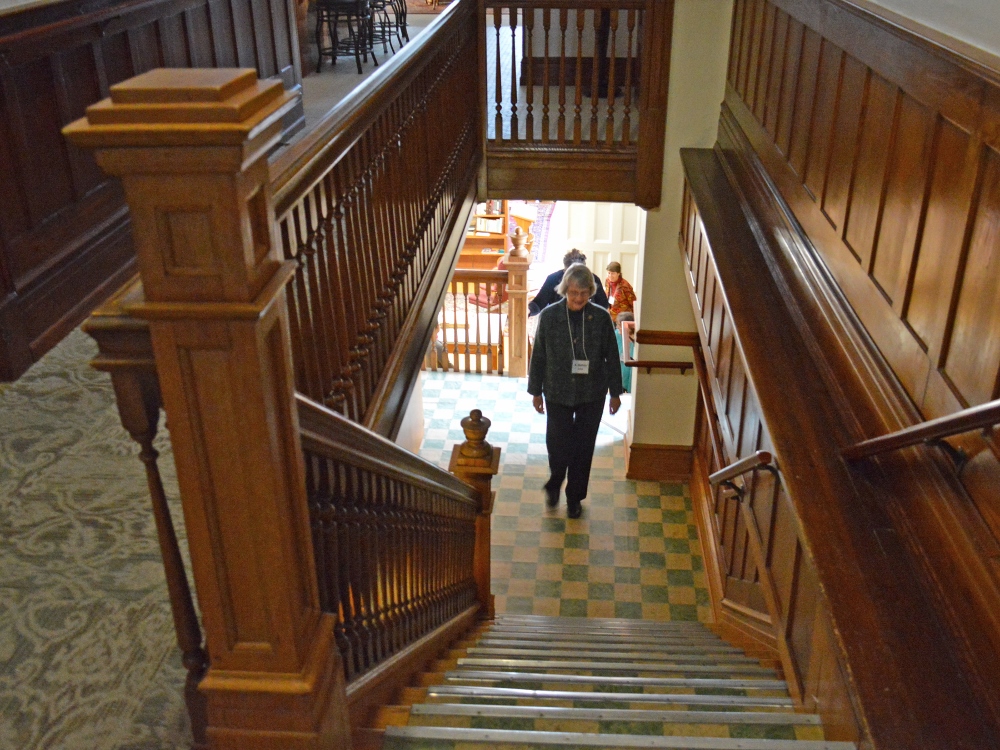 Which, of course, is the motivation behind everything the sisters do – it’s why they didn’t leave Concordia in the 1890s, and why they’ve dug in their heels now when a lot of other people have opted to leave rural America.

“This is their home. They’ve invested a great deal,” said Larry Uri. “They could retreat inside these walls, but they don’t.”

Ministry | Anchor on the prairie: Sisters of St. Joseph are vital part of rural Concordia