Sr. Patricia Fox, the Australian nun whose missionary visa was revoked by the Philippine government in April, has refuted allegations against her by the Bureau of Immigration in a 25-page document.

The nun, who has been living in the Philippines for 27 years as a missionary, said the government has "no right to define and delimit the scope of our missionary and apostolate works," ucanews.com reported.

Attorney Jobert Pahilga, representing Fox, said the attempt to dilute the interpretation of the nun's religious vocation violates the country's laws that guarantee the "free exercise and enjoyment of religious profession and worship."

Fox's affidavit, submitted May 4, noted that authorities "made a sweeping and erroneous assumption of facts and law" when they ordered her arrest and the eventual revocation of her missionary visa.

The 71-year-old nun, who serves as regional superior of the Sisters of Our Lady of Sion, said the bureau should have consulted a religious person, such as a bishop or a priest, "to understand better as to what, as a whole, constitutes missionary and apostolic work."

The immigration bureau cited the nun's attendance at protest rallies of farmers and workers demanding justice from the government.

Authorities said the nun's action constituted a violation of the conditions of her visa not to get involved in partisan politics.

She had been arrested and detained April 16 and released a day later. On April 25, the bureau revoked Fox's missionary visa and ordered her to leave the country within 30 days.

Fox said the government should understand the religious congregation's charism to realize that she was not partisan.

"Our charism is not defined by activity alone, nor is it limited to a specific task. Wherever we are, we must become involved in the situation in which we live," she said.

"A missionary of the church is a missionary for Christ. As missionaries, we are invited to immerse ourselves with the poor," said the retired prelate of the Diocese of Kalookan, Philippines.

"To be witnesses of the life of the poor is also an invitation to speak about the conditions that affect the lives of the people," he said.

Fox's lawyer told ucanews.com that the immigration bureau's decision to revoke the nun's visa without allowing her to refute the charges "is a grave violation of her rights to due process of law."

Bureau spokeswoman Antonette Mangrobang said the nun's affidavit will be reviewed by the prosecutor even though her deportation case is pending before the bureau for further deliberation. 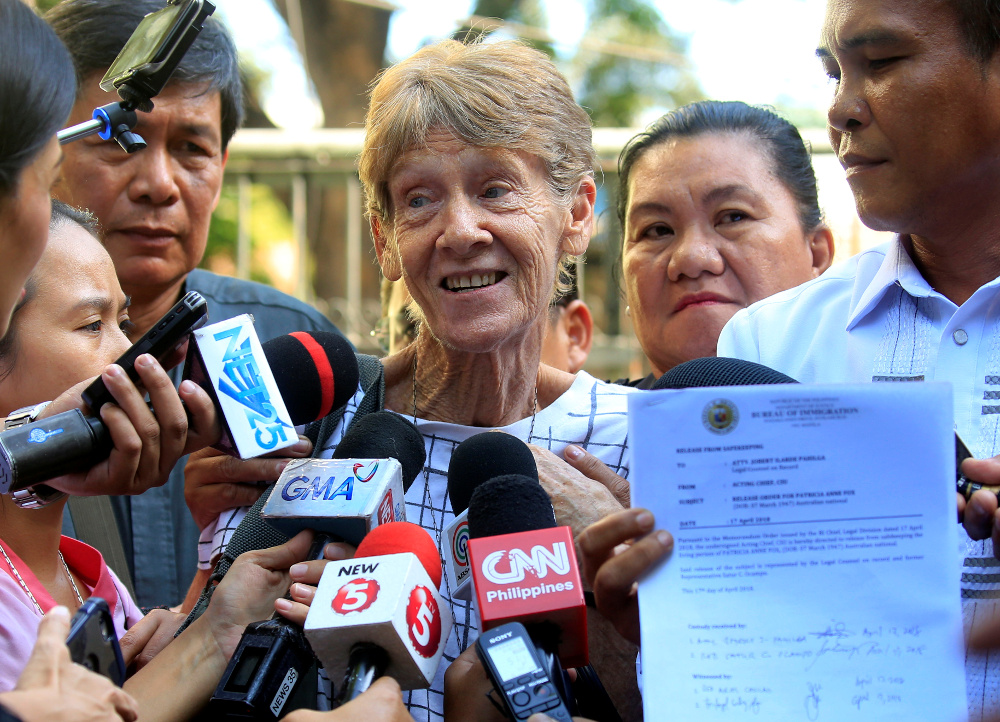