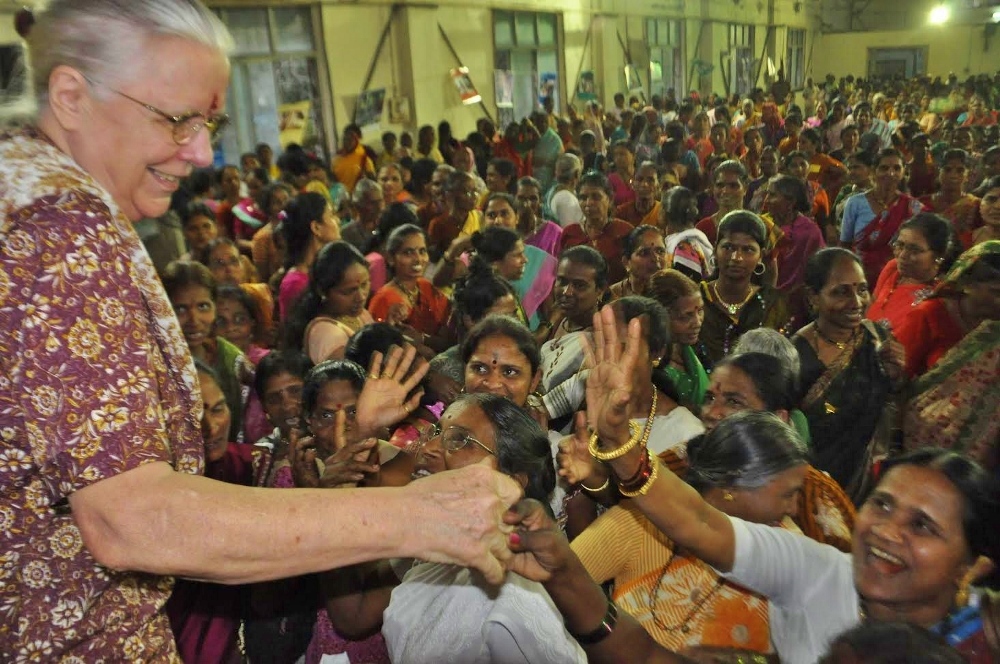 Sr. Jeanne Devos, a Missionary Sister of the Immaculate Heart of Mary addresses a gathering of domestic workers in India. (Courtesy of NDWM Centre, Mumbai)

Nagpur, India — When Fatema was 7, she dropped out of school to look after her younger siblings. Her father is an alcoholic and does not work, so her mother supports the family by cleaning fish.

A neighbor offered to take Fatema in as domestic help. For 500 rupees (about U.S. $7.40) a month, Fatema swept and dusted the neighbor's rooms as well as washed utensils and clothes for about six hours a day. She also looked after the neighbors' 6-year-old grandchild. She would come home around 7 p.m. and did household chores as her mother worked outside.

One day, Fatema's employer came to her house praising her hard work. The woman asked for permission to take Fatema to another village, where she could study and work for a better salary.

Instead, the woman took Fatema to an unknown place and sold her to a brothel owner for 150,000 rupees (about $2,500). The madam told Fatema she had bought her and that she should follow her orders. If Fatema didn't cooperate, the madam would beat her.

Volunteers from the National Domestic Workers Movement (NDWM), a Catholic group, learned the girl was missing and began searching for her, according to the movement's director, Sr. Christine Maria, a member of the Missionary Sisters of the Immaculate Heart of Mary.

It took two months to find her. One of the volunteers pretended to be a client and convinced the madam to allow him to take Fatema for an outing. Instead, he took her to the police station. The police arrested the neighbor who had sold Fatema.

"Her parents thanked us for giving their child a new life," Maria told Global Sisters Report.

Fatema, now 10, is among thousands of Indian girls and women saved by NDWM, a nongovernmental organization started in 1985 by Sr. Jeanne Devos, a Missionary Sister of the Immaculate Heart of Mary from Belgium who has worked in India for the past 51 years.

Devos, 81, said the NDWM's main objective is to empower domestic workers by focusing on human rights and child rights. The movement, based in Mumbai, makes personal contacts with domestic workers, tries to break their isolation, then organizes them in groups to build solidarity. The movement also engages in crisis intervention and provides legal aid to those in need. It campaigns against trafficking by creating public awareness. The group works in 18 Indian states (out of 29) and operates in 28 languages.

Devos learned about the plight of domestic workers from the Catholic Bishops' Conference of India, which conducted a survey on these women in 1978. 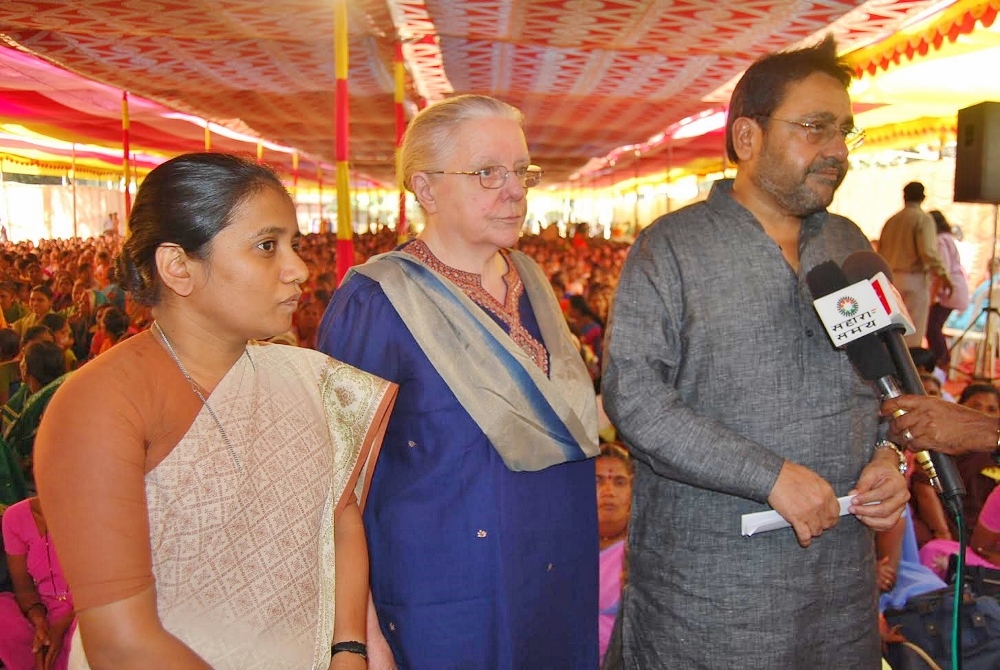 Sr. Jeanne Devos, center, talks to the media with the minister of law for India. (Courtesy of NDWM Centre, Mumbai)

"I was upset. These women lived in inhuman, slave-like conditions on meager wages and with no rights. So I decided to do something for them," Devos recently told GSR in the NDWM office in an apartment in Mumbai, western India.

Devos said she was appalled to learn that Indian society sees no injustice in the way people treat their domestic workers. Instead, people believe they are being charitable by employing the women at all.

"These women have no voice and no means to stand up for their rights," said Devos, who now shuttles between Belgium and India during the year.

Advocating for domestic workers is among several jobs the nun has handled after she came to India in 1965, inspired by the writings of Mahatma Gandhi and Rabindranath Tagore, a Nobel Laureate poet.

"Reflecting on their thoughts, I felt called to serve God in India," she said.

She spent the initial years with children with hearing impairments in Tamil Nadu, southern India, where Mother Marie Louise De Meester founded their congregation in 1897.

Devos worked among teenagers and young people and founded the Young Catholic Students Movement. It soon became a national movement that helps young people use their talents for society.

It was then, in 1978, that Devos read the bishops' conference report on domestic workers. She handed over the youth-movement reins to others and moved to Mumbai to work for those women. In 1980, she started to work with women and girls in Tamil Nadu.

A meeting with Sangeeta, a 13-year-old rape victim, in 1984 convinced Devos of the urgency of starting "something concrete" to help domestic workers.

"Sangeeta was raped, became pregnant and aborted without understanding what had happened to her," the nun said. 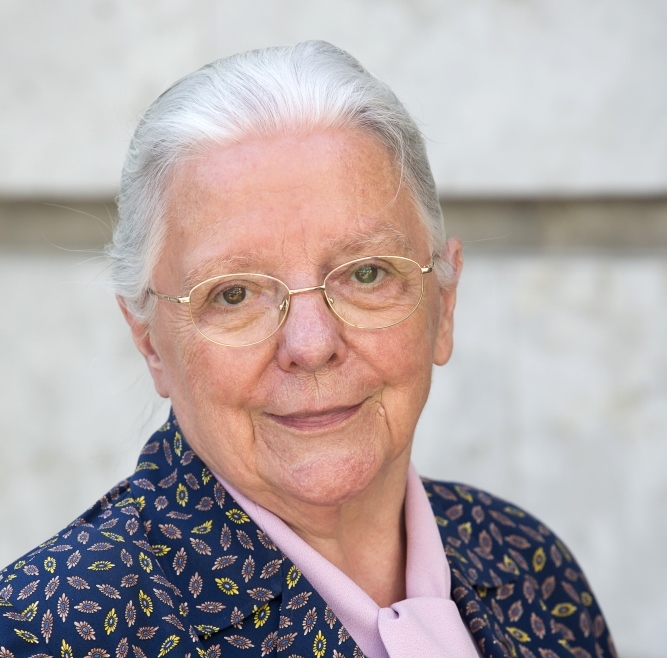 A year later, Devos had moved to Mumbai and started the National Domestic Workers Movement.

Helping the women was easier said than done, she soon realized.

"It was difficult to meet these women because their employers did not allow us to contact them," she said.

In the mornings, the nun met women at milk booths, where milk packets are distributed to families in need, or at schools, where they came to drop their employers' children.

She called some 300 of them for a meeting in 1980. Only seven turned up. The meeting started with a fight between two women. One accused the other of stealing her job.

"I listened silently, not only to their words, but what was in their hearts," Devos said.

She recalls the women telling her that they lived in prison-like situations, sleeping beside rubbish bins and eating leftovers. Devos wanted the women to experience the comfort of home in the workplace.

"Their masters congratulated themselves for giving these women a roof over their heads, something to eat and the right to watch television," Devos said.

The NDWM's main hurdles are the privacy of the homes where the women work, their invisibility, and those with money who seek cheap labor. Added to this is society's refusal to acknowledge the modern slavery.

As she began working with these women, Devos was amazed at their "resilience and collective power." 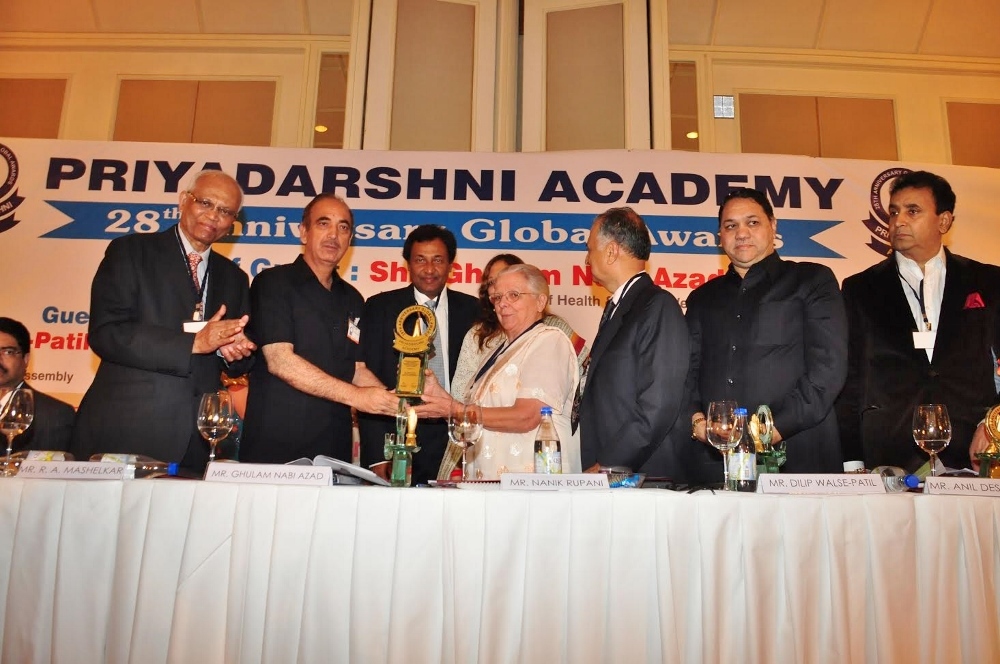 She told the story of how in 2009, approximately 5,000 domestic workers took to the streets to protest the death of a 9-year-old girl. Their neighbor, an NDWM member, knew the girl's employer had raped the girl and killed her to keep it secret. Around 5 a.m., the time women leave their shanties for work, she went around urging maids not to go to work because one of them had been killed.

"It was so incredible that some employers began cooking for these women. Their protests attracted media. It helped me convince the employers that they were responsible for those working in their houses," Devos said.

However, Devos has also had her share of troubles. Some employers complain that they cannot afford the salary she demands for the women. She also receives death threats.

"From the beginning, I was seen as a nuisance, and some employers threatened to dismiss their workers if they attended our meetings," she said. The movement always found jobs for anyone who was dismissed.

The movement has also advocated for better compensation for underpaid members like Mistina, who had been working for a Christian pastor in Assam, northeastern India, for 500 rupees ($8) per month.

Mistina's parents had abandoned her, so her maternal grandfather looked after her. Mistina's grandfather accepted the pastor's low paycheck because the family lived in extreme poverty.

Mistina was charged with looking after the pastor's two children, cooking for the family, washing their clothes, collecting firewood and buying provisions from the market. If she made a mistake, the family would beat her and pull her hair. She was never allowed to visit her grandfather.

Finally, she ran away and reached a nearby railway station, where the police spotted her and took her to an NDWM shelter.

The shelter home officials called the pastor. He denied the poor treatment but finally said he was unjust to her. He promised to pay her 5,000 rupees (U.S. $75) as compensation for the physical abuse.

Sr. M. Josephine Amala Valarmathi, also a Missionary Sister of the Immaculate Heart of Mary, coordinates NDWM in Tamil Nadu. She said the women are united to demand their rights even though they come from different religious, ethnic and linguistic backgrounds.

Valarmathi was in Mumbai in early October to attend a meeting, said her organization conducts various training programs throughout the year for these women. The courses focus on social security and welfare programs, the power of collective bargaining, health and hygiene, anti-trafficking and safe migration, leadership and personality development.

Many women helped by the movement have become leaders. They speak for other women in similar circumstances and inform the NDWM to help rescue them. They work as animators and as coordinators of the movement in different states.

"She sustained and helped [the] movement grow in collaboration with various individuals and organizers. She also raised funds for the movement from her home country," Maria said.

NDWM president Fr. Felix D'Souza said Devos has helped take the concerns of domestic workers to global platforms, including the International Labour Organization. The public in India has now begun to understand the suffering of the domestic workers, he said.

"Above all, domestic workers are organizing themselves and feeling the impact of the movement," the Mumbai-based priest told GSR.

Merina Basomatary, a former domestic worker who is now an NDWM coordinator in Shillong, northeastern India, said the movement has helped her to travel to many countries to represent her people. Devos made it all possible, she said.

The world has recognized Devos' efforts. The Catholic University of Leuven granted her an honorary doctorate in 2000. Five years later, she was nominated for the Nobel Peace Prize. In 2009, King Albert II of Belgium awarded her the Grand Cross of the Order of the Crown.

Even Indians have rewarded her. In 2012, she received the Ramkrishna Bajaj Memorial Global Award from the Priyadarshni Academy, a nongovernmental organization engaged in social, educational and cultural pursuits.

Devos said she regrets that few religious now want to be involved in "contemporary mission works" such as helping domestic workers and advocating against child labor and human trafficking.

"Today, the religious need to manage different schools. It may not bring in 100 percent results if we try to educate children of migrant or domestic workers, but that is what we are called to do as followers of Jesus," she said.

Valarmathi said the Belgian nun has sown the seed, and it is time for Indians like her to carry forward the "challenging mission" of helping the unorganized women.

"Because we have a long way to go, God will support us with another Jeanne Devos," Valarmathi said, her voice mixed with hope and sadness. "Her physical presence will not be here, but she will support us."

A halfway reflection: Feeling bruised and faltering — but not giving up

As Trump visits border, Pimentel and other sisters keep up their witness