Catholic sisters serve 'where no one else will dare go,' UISG leader says 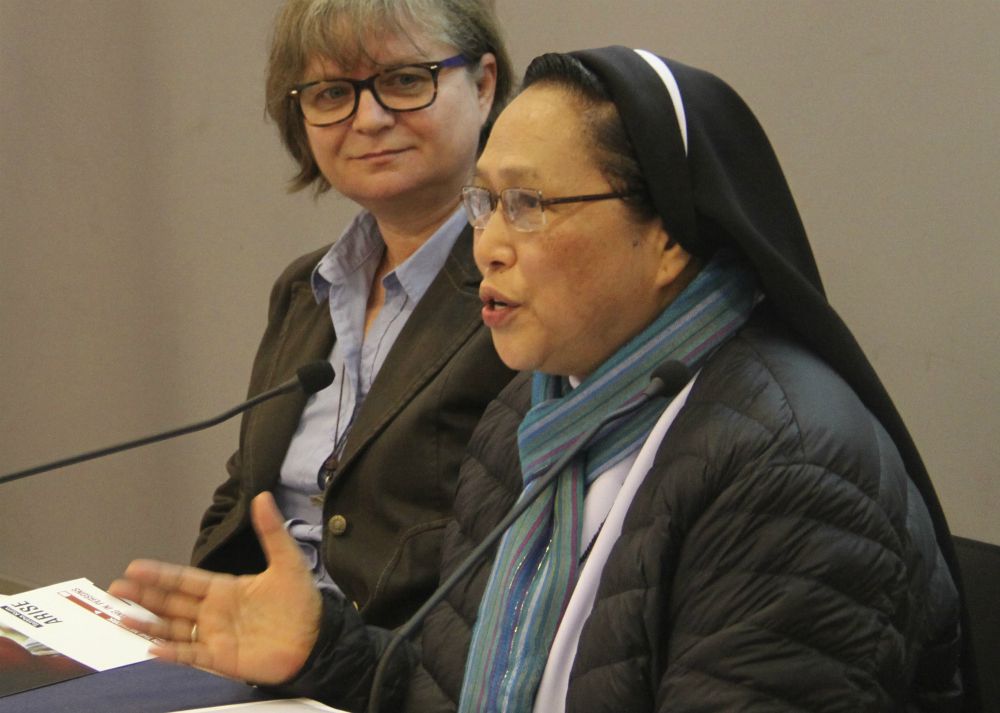 Dominican Sr. Cecilia Espenilla, coordinator of the Philippine branch of the anti-trafficking network, Talitha Kum, speaks at a symposium in Rome April 11. The event was held to discuss and honor the work of women religious in conflict zones. Also pictured is Italian Comboni Sister Gabriella Bottani, coordinator of Talitha Kum. (CNS photo / Courtesy U.S. Embassy to the Holy See)

Rome, Italy — Catholic women religious around the world are heeding Pope Francis' call to serve those most in need and going "where no one else will dare go," said the executive director of the Rome-based umbrella group that represents approximately 800,000 women religious.

At an April 11 event focused on drawing attention to the work of Catholic sisters in some of the world's most dangerous regions, Sr. Patricia Murray of the Institute of the Blessed Virgin Mary said women religious are "radically committed to incarnating the Gospel here and now, living the beatitudes and bringing the love of God to ever-new frontiers."

"Today, more than ever, we are answering the call of the church and hearing the words of Pope Francis when he encourages religious women and men to leave our nests [and] go to the frontiers," said Murray, who runs the headquarters of the International Union of Superiors General (UISG), a membership group of some 2,000 leaders of women's orders.

Murray spoke at a half-day seminar, "Women Religious on the Frontlines," co-hosted by UISG, the U.S. Embassy to the Holy See, and Solidarity with South Sudan. The event featured two panel discussions with six women working in various conflict zones.

At the end of the morning, Vatican foreign minister Archbishop Paul Gallagher thanked women religious around the world for the service they give to the church and to wider humanity.

Gallagher, the secretary for relations with states at the Vatican's Secretariat of State, gave three examples of how he has seen the dedication of women religious in his three-decadeslong diplomatic career.

In one example, he spoke about how women were central to the structure of the Catholic Church in Libya before many were forced to leave the country after the outbreak of civil war in 2014.

"With the disappearance of those sisters, the Catholic community to a very large extent dissolved," Gallagher said. "It was a front line in which the sisters had an indispensable, vital role in the life of the church."

"In the 30-odd years that I've been doing this diplomatic job on behalf of the Holy See, everywhere I've been, there have been women like this," he said. "And I have no doubt that women like this will continue to serve the church, to serve humanity, to serve Christ in the future. And for that, I give thanks."

Among those taking part in the panel discussions was Blessing Okoedion, a Nigerian woman who was lured to Italy with a promise of a job and forced into prostitution before she was helped back into freedom by a community of Ursuline sisters in Caserta, Italy.

Okoedion spoke about how the sisters helped her work through the trauma she had suffered to regain her dignity.

Dominican Sr. Cecilia Espenilla, another of the panel speakers, spoke of the need to educate boys and men that "women are not for sale."

"We are not second class ... there is no humanity without women," said Espenilla, a native of the Philippines who serves as the justice and peace promoter for Dominican Sisters International, an umbrella organization for 147 Dominican religious congregations.

"Women religious are the last beacon of hope for millions of people suffering from famine, disease and conflict," she said. "Too often, the work of women religious is underappreciated and unnoticed."

Oblate Fr. Henry Lemoncelli, an official at the Vatican's religious congregation, shared six things that inspire him from the reports he reads from sisters' communities around the world. Among them: the ability "to discern the most urgent needs and to respond to them without fear," sisters' "trust in divine providence," and their "courage and daring."

"Sisters run in where angels fear to tread," he said.

Ministry | Catholic sisters serve 'where no one else will dare go,' UISG leader says

Singing compassion into the world