Communities on the U.S. border 'grow from within' 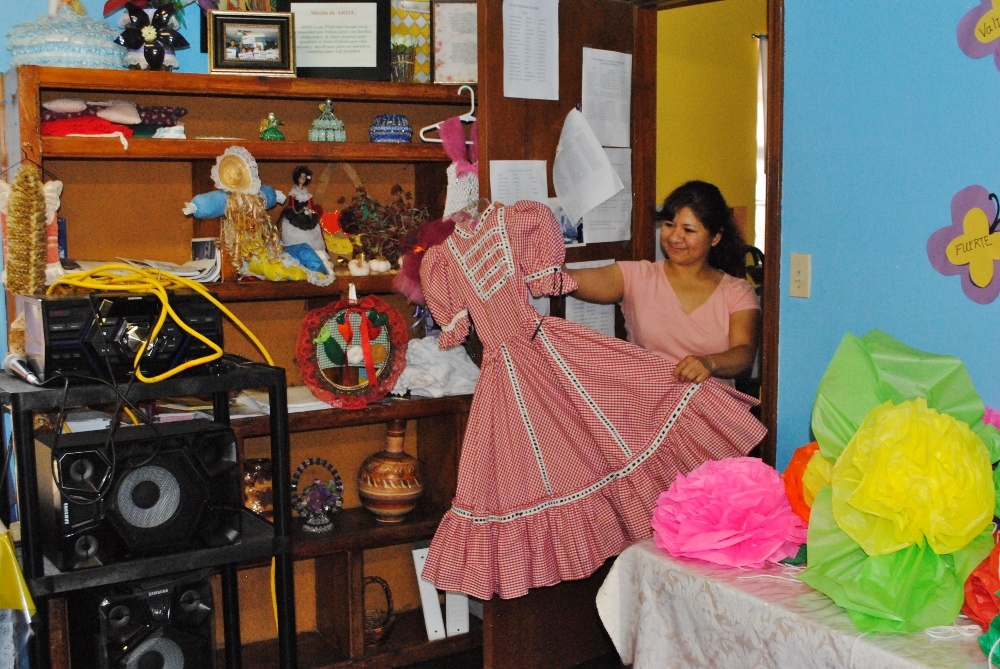 Pharr, Texas — In 1987, Mercy Sr. Gerrie Naughton went door-to-door in her new town of Las Milpas, Texas, meeting families to get a sense of the community's needs.

Few people in the town of 12,000 spoke English. They called Naughton la monjita en la bicicleta — "the nun on the bike."

At the time, a majority of the families established in the area lived off a yearly income of $7,000. They had no fire department, public lighting, paved streets, drainage system, clinic, or public transportation — just a small convenience store.

So in 1989, Naughton founded ARISE (A Resource In Serving Equality) with five immigrant women all eager to change their personal, family and community lives for the better. The grassroots network aims to empower women through educational courses, leadership training and civic engagement and now serves hundreds of members in four areas around Pharr: Las Milpas, Muniz, Hargill, and South Tower.

"Our intention was always to bring services to us so that the community could grow from within," said Andrea Olvera, director of the South Tower center and a member of ARISE for more than 25 years. "The more programs we implemented, the more we got to know each other's families, their struggles, their stories. . . . And that helped us grow, because once we knew what our needs were as a community, we could design programs that would address them."

ARISE was first founded in the colonia — or "greater neighborhood" — of Las Milpas, just south of Pharr and across the border from Reynosa, Mexico. The town's population began to multiply with Mexican immigrants in the 1980s, and just before Naughton's arrival, President Ronald Reagan signed the Immigration Reform and Control Act of 1986.

The law granted amnesty to 3 million undocumented immigrants throughout the United States, and those living in greater Pharr felt liberated and encouraged to learn English and become U.S. citizens.

"Gerrie told us she expected excellence, not perfection, because only God is perfect," said Ramona Casas, a community leader. "She said she wanted to call me the 'animator' for students. Share your dreams, your roles, and why you want to learn English. Motivate them. Even if you struggle to pronounce [a word], don't be embarrassed, and encourage them not to be embarrassed."

Adults have access to courses for literacy and English learning, citizenship and getting a driver's license. There is also a health support group, creative classes (including baking, sewing and art), personal and leadership development, and a community parent-teacher association (PTA) program. For those not from the Pharr area, ARISE offers a weekend retreat with its Border Witness Program, intended to immerse participants in the realities of migrants crossing the border.

Beyond serving public needs, ARISE also sought to empower the many women suffering from low self-esteem.

Olvera, for example, left Mexico for McAllen, Texas, where her mother lived, in 1990 following issues in her marriage. Her young children were just beginning school, and she found herself alone at home without the legal documents to get a job.

"I knew I didn't want to just stay put at home and that I needed to do something with my time," she said. "I was embarrassed and humiliated — what anyone might feel at that point in their life — lacking respect or value. But I thought, 'No, if I don't do something for myself, nobody will.' Then I heard about ARISE, so I went to start learning English, so that I could also help my daughter as she learned in school." Olvera now works for ARISE.

ARISE gave Eva Cerranza, originally from Reynosa and currently living in Alamo, Texas, a reason to get off the couch more than a decade ago.

She had been separated from her husband for a year when ARISE was going door-to-door in her neighborhood, encouraging registration for classes. Though Cerranza said she refused to sign up out of laziness, preferring to spend her days lounging and eating because of depression, she enrolled her daughter in the early education courses, aware that it was good for her daughter to be out of the house for a few hours a day.

"Eventually, I learned that you suffer because you want to, that only I could turn things around for myself," she said. "I don't think even the best psychologist could do for me what ARISE did. They helped me change my life radically. I don't know what my daughter would have done because she would've been the one to suffer the consequences of my depression and negligence. ARISE never obligated me to do anything, but they provided the assistance I needed to turn my life around."

Now, Cerranza is the president of the community PTA and heavily involved in several of its programs.

Cerranza said her fellow ARISE members are like her sisters. When her mom was hospitalized with cancer, she at first had to stay at home to wait for family members from Mexico to arrive. When she finally arrived at the hospital, she said through tears, she found that a crowd of ARISE women had been there the whole time, visiting her mother.

Along with empowering women by giving them an individual sense of purpose, ARISE also prioritizes improving the town's conditions as a way to help re-establish a sense of dignity among its residents.

Delia Villa, now a community leader at the center in Las Milpas, recalled when the colonia didn't have toilets, just outhouses, and how she would show up to school with muddy shoes when it rained because of the unpaved roads.

"By the time we got to school, people were like, 'Oh, they're from that side of town,'" she said. "It was humiliating, in a way."

Not long after Naughton arrived in the Rio Grande Valley, she put an ad in the local paper simply to tell people that God is in Las Milpas and that its community is full of hard workers. Casas said Naughton taught the residents not to be ashamed of where they were from and wanted to remind neighboring colonias that Las Milpas must not be dismissed.

"We began to believe that," she said.

They then made ARISE T-shirts with "Las Milpas" written in large font across the front so that they could learn to be proud of their neighborhood.

Now, along with proper plumbing, parks and paved roads, the town has several elementary schools and a nearby high school, a fact that Villa attributes to ARISE's extensive networking with local businesses, nonprofits and government.

Pharr also recently had a groundbreaking for a library, so its residents, many of whom don't have internet access at home, will no longer have to travel for this basic service or to rely on the computers at the many ARISE centers, which have more limited hours.

Naughton, who died in 2009, welcomed those of any religion to join ARISE, yet she inspired the majority of ARISE's leaders to become Mercy associates.

"I can share [the Mercy sisters'] mission and associate with them," said Casas, who is a Mercy associate. "I was so happy and privileged to be a part of them and learning how they see God, which is now the way I see God. I was always taught that God is in heaven and Earth, but I never saw him as part of my heart, too, as inside of me, too. It's a spirituality that I had to learn."

For Mercy associate Petra Hernandez, director of the center in Las Milpas, ARISE aroused a deeper spirituality for her that she otherwise never engaged.

"It's benefited me so much throughout the years. ARISE is an organization that always grows and encourages growth intellectually and spiritually," she said. "I would only go to Mass on Sundays, never reflected; now, it's different. Everything I learn here, I teach my family. All the ways I grow here end up multiplying when I take it back to my family."

Under the guidance of Mercy sisters and Sisters of Charity of the Incarnate Word, who work as advisers for the group when needed, ARISE strives to maintain its original values (its cornerstone being Luke 4:18-19), though the group is never sure where the community's needs will take the organization.

"Programs may change, or the issue we're focused on or who's on our team, but the values — serving the community, walking with the marginalized — that doesn't change," said Lourdes Flores, director of the ARISE support center. "That's the excellence we strive for, always focused on our founding principles and what it means to be a part of ARISE."

Ministry | Communities on the U.S. border 'grow from within'

Q & A with Sr. Ann Kendrick on 50 years serving farmworkers in central Florida