by a GSR contributor
Ministry 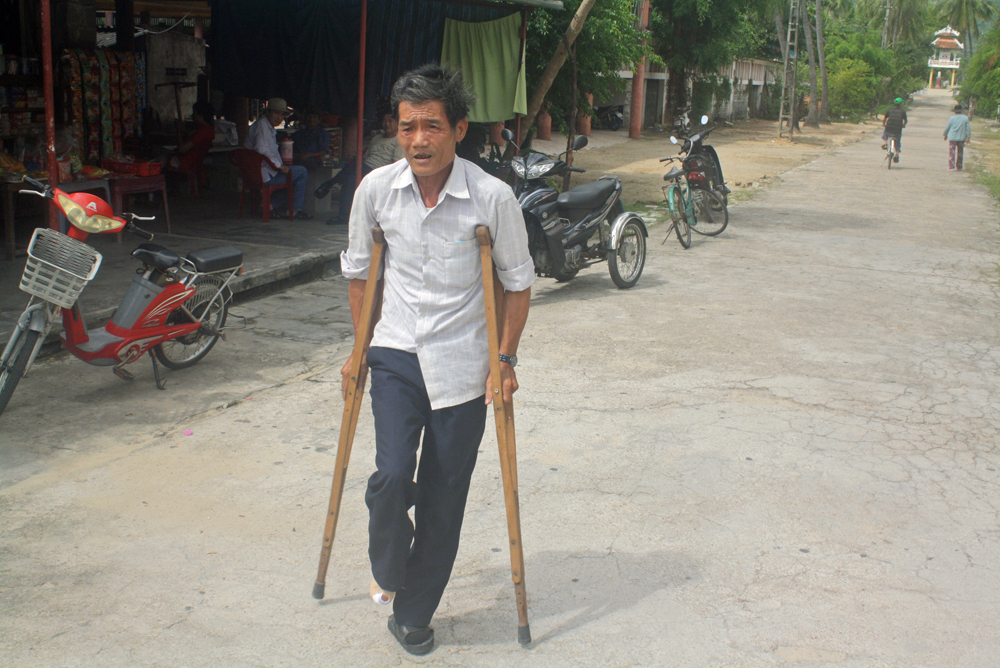 A man missing his toes because of leprosy walks with crutches. Most elderly patients live on donations from the nuns and benefactors. (GSR photo)

Quy Nhon City, Vietnam — Last fall, I had a chance to visit people with Hansen's disease, also known as leprosy, at a coastal village of Quy Hoa on the outskirts of Quy Nhon City, central Vietnam.

The 1,000-resident village is home to about 450 people with leprosy who have lost their toes or fingers and suffer deformity on their faces as a result of the disease.

The village, surrounded by hills and beaches, was built in 1929 by the late French Fr. Paul Maheu, who had gathered people with leprosy to come there for care. In 1933 he handed over his mission to French nuns of the Franciscan Missionaries of Mary to carry on after he returned home due to poor health. 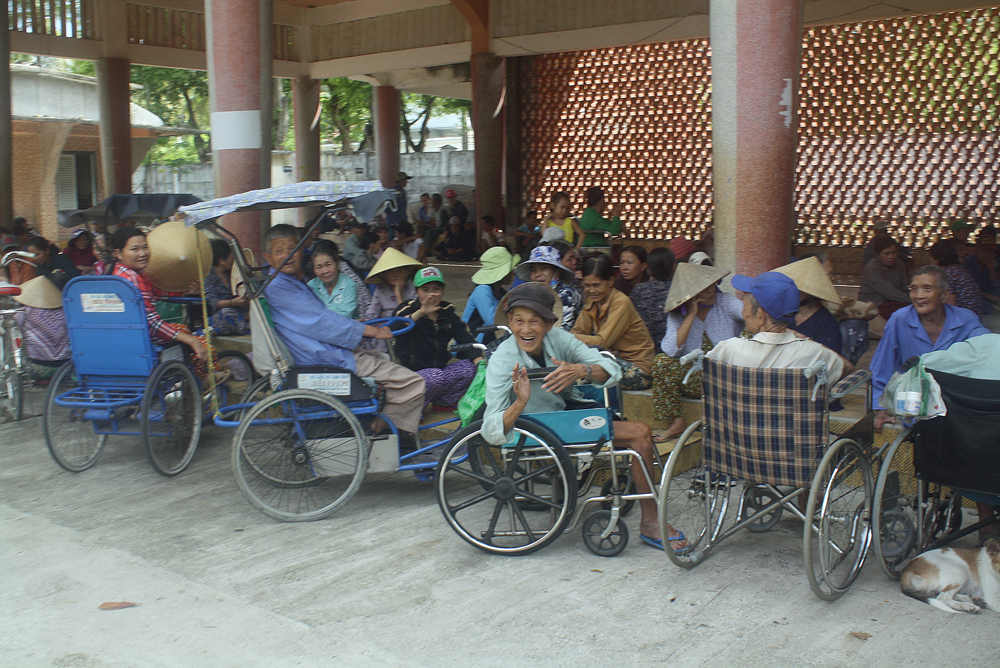 People with leprosy gather at a village house to receive gifts from benefactors. (GSR photo)

The nuns served 500 to 700 patients and built convents, a church, treatment facilities and houses for disease victims in the village that covers about 150 acres.

After the Vietnam War ended in 1975, the Communist government confiscated all facilities except for one convent and the church. They also expelled foreign nuns from the country, but a few sisters were allowed to stay and care for patients at the hospital.

The hospital was named Quy Hoa National Leprosy Dermatology Hospital. Today, it is the largest hospital for skin disease and leprosy in central Vietnam. It is staffed by more than 400 workers.

However, only one sister remains working in the hospital. Some local people told me that hospital officials try to limit the nuns' involvement in the hospital because the sisters struggle for patients' rights and demand transparency and accountability.

Other sisters volunteer to serve the patients. They cook and offer nourishing meals to 100 elderly people once a week, provide monthly food and allowance to patients, and give their children scholarships and travel fees for school. 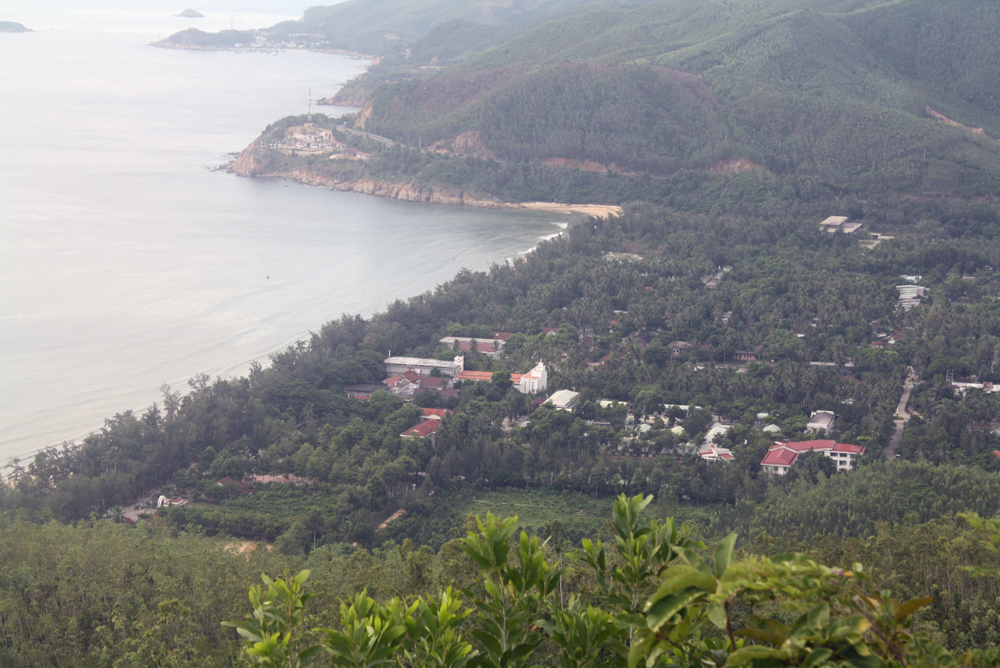 The hospital, convent and village are based along the beach. Franciscan Missionaries of Mary nuns built the facilities for people with leprosy decades ago. (GSR photo)

Patients also rely on the nuns for specific treatments for their diseases because the hospital does not supply them with the appropriate medicines.

The patients said the nuns call on benefactors to make donations to help improve the patients' lives. The sisters win support with their selfless service and spiritual care for patients and their families.

"The nuns struggle for our rights and benefits so we all respect them and consider them as our family members," one patient said. "When hospital officials ask us to do something, we seek advice from the nuns as officials work for their own interests rather than ours."

Tran Cuu, 73, from Quang Nam province, who has been in the village since 1960, said he converted to Catholicism because "the nuns have cared for me like my mother." His father is a Communist Party member and some of his siblings are Buddhists.

Following the nuns' example, Cuu, a father of three, is in charge of cutting elderly patients' hair, visiting and consoling them.

Most villagers live mainly on monthly donations from the nuns and outside benefactors. Their children, who are not afflicted with the disease, carry out small business in the village for a living, catch fish at sea, run small restaurants in the city, or go to look for jobs in the cities.

Through the nuns' contacts, groups of people, including followers of other faiths from other places, visit and give donations to the patients.

Patients from all over come for treatment and then return home. The hospital allows elderly patients to stay in the village but young patients are denied residency. Priests and women religious in other areas refer people with leprosy to the hospital, especially ethnic minority patients from remote regions.

An American soldier, who was based near the village and offered medicine and hospital supplies to the nuns in 1970, still remembers the nuns' hospitality and visited them recently. "I highly appreciated the nuns' voluntary service at the village when I was here. I am happy to visit them again after over 40 years," he said.

I climbed a steep flight of stairs to a hilltop where, in the 1960s, the French nuns had erected a Christ statue and Marian statue, looking down on the village and the city. The statues were destroyed during the Vietnam War.

Recently the nuns secretly erected two new statues on the hilltop, and more and more Catholics have visited the site to pray. 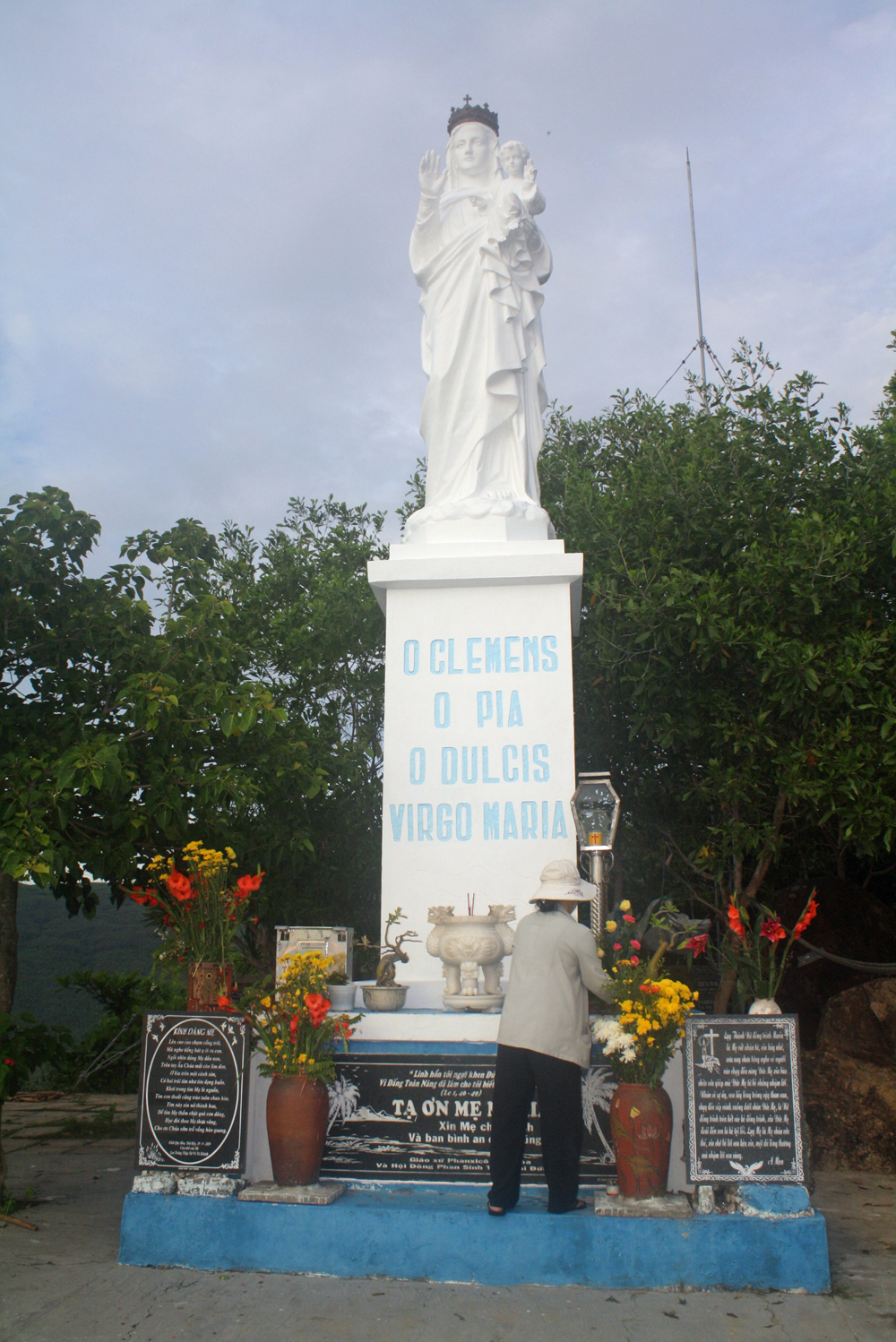 A Marian statue erected a couple of years ago looks down on the village. (GSR photo)

Every day 10 workers carry water, sand and cement on their shoulders to the hilltop for building fortifications around the statues.

The nuns said they want to preserve religious works that their predecessors established, and hope the two statues will become a pilgrimage site in the future so that people can express their gratitude to them.

On Nov. 9, 2016, Pope Francis called on Christians to restore the dignity of the sick.

"Do not leave sick people alone! Let us not prevent them from finding relief and for us to be enriched by the closeness to suffering. Hospitals are the true 'cathedrals of suffering,' where, nonetheless, the strength of charity that supports and proves compassion becomes evident," he said. 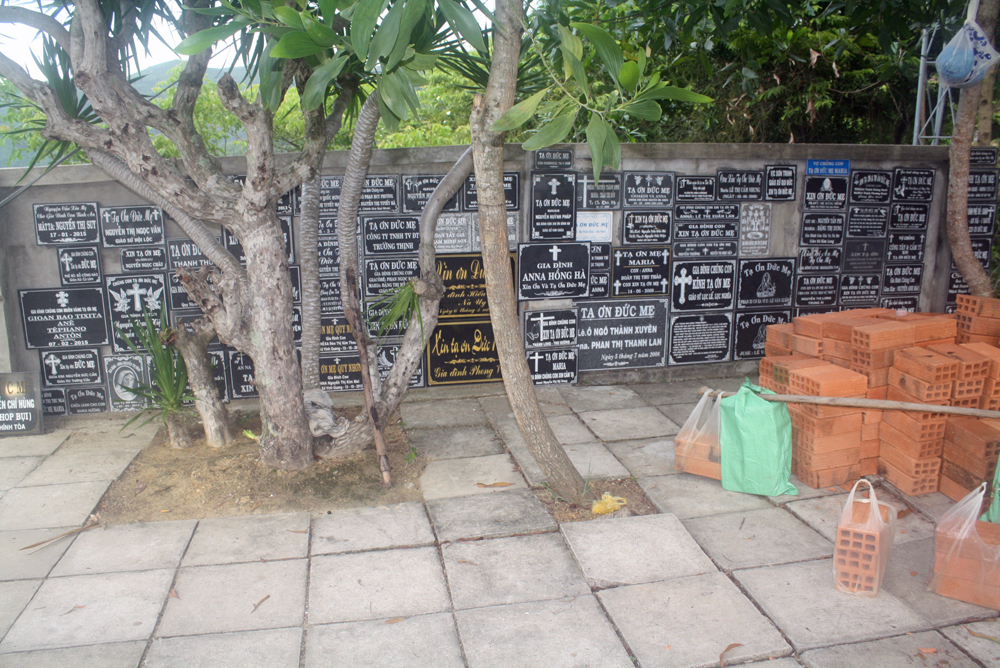 Many pilgrims post boards around the statue's base to express thanks to Mother Mary. (GSR photo)

I see that the Franciscan Missionaries of Mary are sharing God's mercy with people with leprosy through simple gestures — their smiles, caresses and presence. The nuns quietly spread the mercy every day to start a revolution and stamp out the "virus of indifference" in society the pope has encouraged the faithful to address.

Other coverage of sisters working with patients with Hansen's disease:

A pilgrimage lesson offers a path to purpose

Q & A with Sr. Helen Amos: 'To be homeless is a health issue'