Elsa Solis Morales had lived in Birmingham, Alabama, for four years when her abusive relationship drove the courts to take away her three children. Though they were returned once Morales separated from her husband, the 35-year-old mother needed to provide clothing, furnish their new living arrangements, and undergo therapy — overwhelming tasks given her lack of English and difficulty finding a job.

As she sat alone in La Casita's waiting room, Morales seemed eager to share her experiences, details pouring out of her with little prompt. Wiping away tears, she said she hoped her story would empower women who also found themselves in desperate conditions.

"In these situations, it's very difficult to know how to look for help or where to begin," she told me on this, her first visit to the center staffed by Catholic sisters supporting the burgeoning Hispanic scene in the Birmingham diocese. A friend had recommended she look into La Casita, and Morales didn't have a Plan B.

Within the hour, she spoke with a sister about obtaining financial relief, scheduled a session with a psychologist, and met with a notary to discuss her rights and how to fully liberate herself from her abusive relationship.

The Guadalupan Missionary Sisters of the Holy Spirit — whose motherhouse is located in Mexico City — formally began their La Casita ministry in the diocese in 2002. By 2015 they were finalists for Catholic Extension's Lumen Christi Award, granted to an individual or group whose mission best demonstrates how faith can transform lives.

La Casita provides services ranging from citizenship classes to a food pantry to legal consultations, aiding more than 28,600 individuals with help from more than 1,000 volunteers in 2014 alone. La Casita assists in the following areas:

"I knew that they were hungry, so I felt I needed to do something else — not just tell them that God loves them," she said of her time in Mississippi. "I need to attend to their basic needs. . . .  God takes care of their spirits, but we must take care of their bodies, too."

Lopez works at La Casita's second location in Eutaw, Alabama, about 90 miles southwest of Birmingham. The center, called the Catholic Center of Concern, is located in Greene County, where a third of its residents live below poverty level, according to the U.S. Census, and where many already receive assistance such as food stamps or child support.

"Now, when I pray, I think of specific places or needs, not just general prayers. God is in each person we serve at La Casita, and even my way of praying has been changing."

According to the 2010 U.S. Census, roughly three-quarters of Birmingham's population is black, while nearly one in five residents are white; the Guadalupan sisters, however, are among the Hispanic residents, who number nearly 4 percent. And in a predominantly Baptist region, they're double-minorities: Roughly 8 percent of the city's population is Catholic.

But the demographic landscape has been rapidly evolving. From 2000 to 2010 the number of undocumented immigrants in Alabama increased from 25,000 to 120,000, with workers drawn to jobs in the meatpacking, agriculture and construction industries, according to Pew Hispanic Research.

That's where the sisters came in.

"Greene County is one of the poorest counties, and the sisters have taken that over," said Albert Manzella, executive director of Catholic Social Services for the diocese.

"Supposedly there's always been a conflict between the black and the Hispanic community, drummed up mostly by the people in the white community, which politicians play up. But what's been exciting is we have brown people helping black people, and we're seeing a really neat relationship established," he said, adding that the sisters have become a much-needed bridge for the communities.

Ramirez, however, said "there's still racism here, and we're learning how to handle the situation."

In 2011, Alabama's Republican legislature passed the harshest state immigration law in the country. Known as HB 56: The Alabama Taxpayer and Citizen Protection Act, it was intended to encourage self-deportation by making life as difficult as possible for the state's undocumented people.

Key provisions had schools check their students' legal status, prohibited landlords from renting homes to the undocumented and required police to arrest those who merely helped someone living in the state illegally by giving him or her a ride in their car.

Catholic Social Services sued the government, Manzella said, in a challenge supported by the business community, who feared the law would scare away both its workers and put the state's agricultural industry at risk. In an interreligious effort, Manzella said the bishops and archbishops of Alabama — Catholic, Methodist and Episcopalian alike — joined the lawsuit, successfully pushing for amendments that would allow everyone freedom to worship and prevent racial profiling.

Federal appeals courts, however, intervened weeks after the law went into effect, and by 2013, Alabama had settled its lawsuits. Today, the revised law still requires companies to check a new hire's legal status against a federal database, and police can still check the immigration status of anyone they pull over.

La Casita helped Maria Hidalgo, 31, acquire resident status when she moved to Birmingham 14 years ago from just outside Mexico City. Such a process required a hardship waiver and proof of her psychological state, among other administrative essentials.

"Honestly, I don't know where I'd go for the help that we got," she said. "I'd still be stuck with the lawyer that didn't help me. . . . Without these forms, they'd be able to deport me."

Then Hidalgo put her hairnet on and headed back to the kitchen, where Mexican music and laughter were at full volume as sisters and volunteers prepared tamales in an assembly line at a local parish for their annual fundraiser.

"It's their way to show gratitude," Ramirez said of the volunteers, most of whom also receive assistance from the center. "They're letting us know that since we've been helping them, more people are in need, so it's their way to pay it forward."

Manzella added that while many of their volunteers are undocumented, in Mexico they were professionals and are eager to apply their skills by helping at the center. Schoolteachers, for example, often offer individual tutoring sessions, he said.

"Not only is the person getting a good education, but we're also dealing with a person who has succeeded here, so there's good cultural transference on how to survive here and what to do," he said. "They become like role models."

One program coming soon to La Casita is Community Place, developed by the Mexican government and provided free by the Mexican Consulate, offers adult Spanish speakers the opportunity to begin, continue or improve their education, in Spanish. The program results in GED certification. The center encourages kids to perfect their Spanish skills before pursuing English so that they can be truly bilingual, yet still maintain cultural harmony in families where parents are likely to speak only Spanish, Manzella said.

For Nancy Herrera, 36, the psychological services offered at La Casita were essential for managing the stress that followed her family's move to Birmingham from Guanajuato, Mexico, nine years ago.

"I hardly understand English, so I'm able to understand things more here," she said of the center, where she also volunteers. "It helps to talk things out with someone — the stress, your worries, the kids, everything. But I wouldn't have been able to afford the help anywhere else."

Twice a week, Cecilia Reyes offers psychological services at La Casita, primarily seeing women and couples. Domestic violence, economic stress, loneliness, lack of communication, and a stubborn macho culture — all are regular topics Reyes said she deals with throughout her 10 to12 sessions on a given day.

"I understand their frustrations — coming to a new place where you're unable to work, far from family, struggling with the language, feeling isolated. . . ." she said, noting that she moved from Mexico when her husband was offered a job in Birmingham. But she was unable to obtain a visa allowing her to work. "My life in Mexico was a lot faster paced — I worked in a clinic. I had my own practice. Then I came here and had nothing.

"I want to help people accept their realities rather than complain about them, help women feel their value, their strength."

As I left the parish where the sisters were preparing tamales, I bumped into Morales, who just the day before I had met in La Casita's waiting room.

This time she appeared cheerful. Morales had heard the nuns needed help in the kitchen and was eager to return the favor. And in that moment, it seemed that La Casita had, in fact, helped someone feel her value and strength.

[Soli Salgado joined NCR as an editorial intern in January 2015. Born in Buenos Aires and raised in Wichita, Kansas, she graduated from the University of Kansas in 2013 with degrees in journalism, English literature, and Spanish. Soli has previously worked for The Utne Reader, MOTHER EARTH NEWS magazine, and The Wichita Eagle. Follow her on Twitter @soli_salgado.] 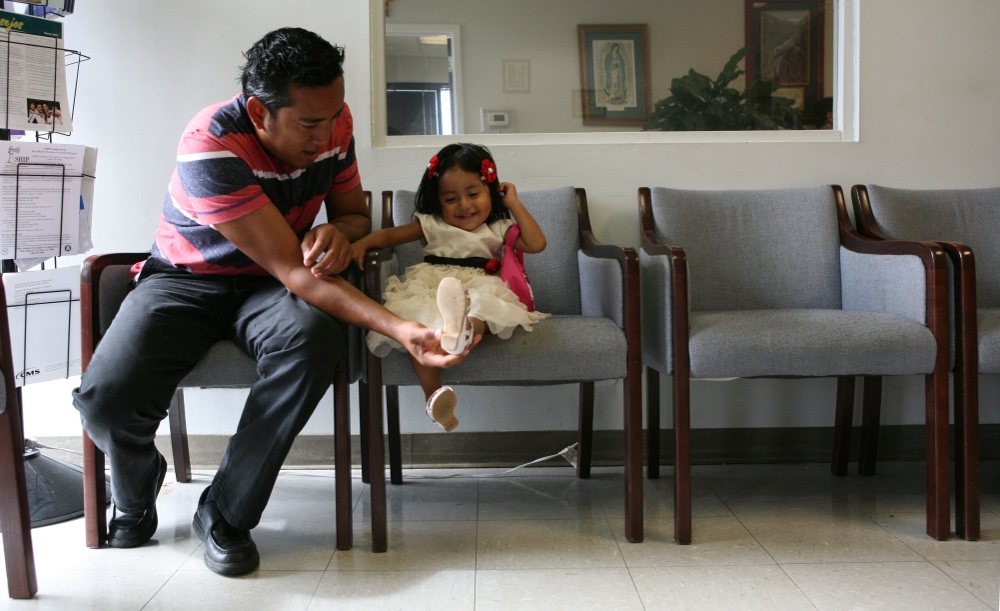 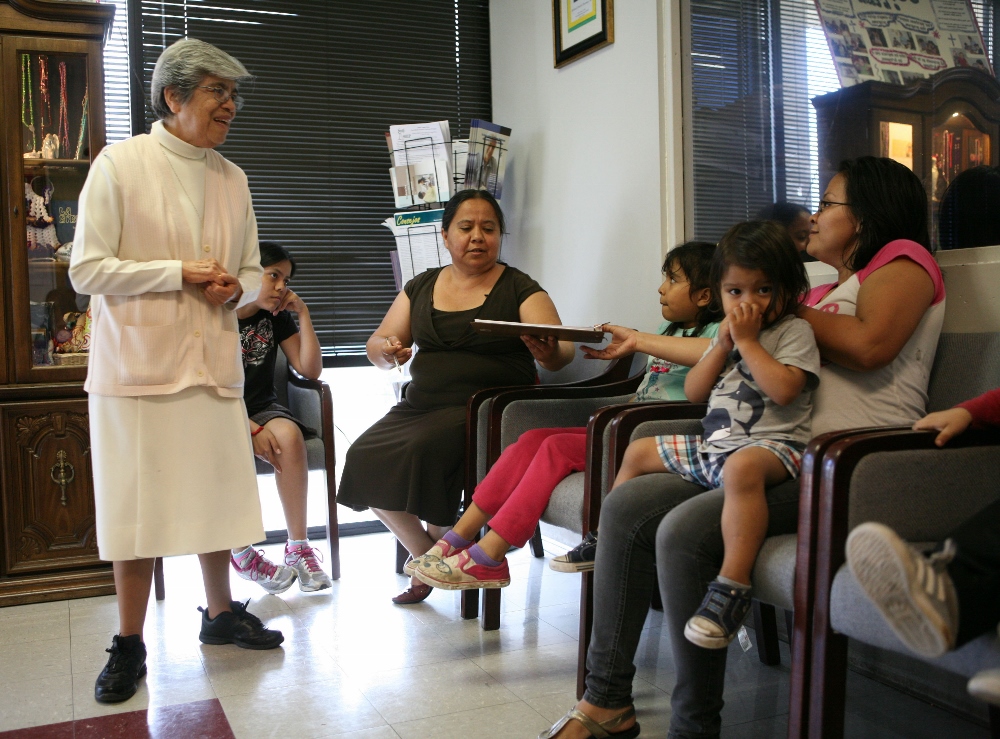 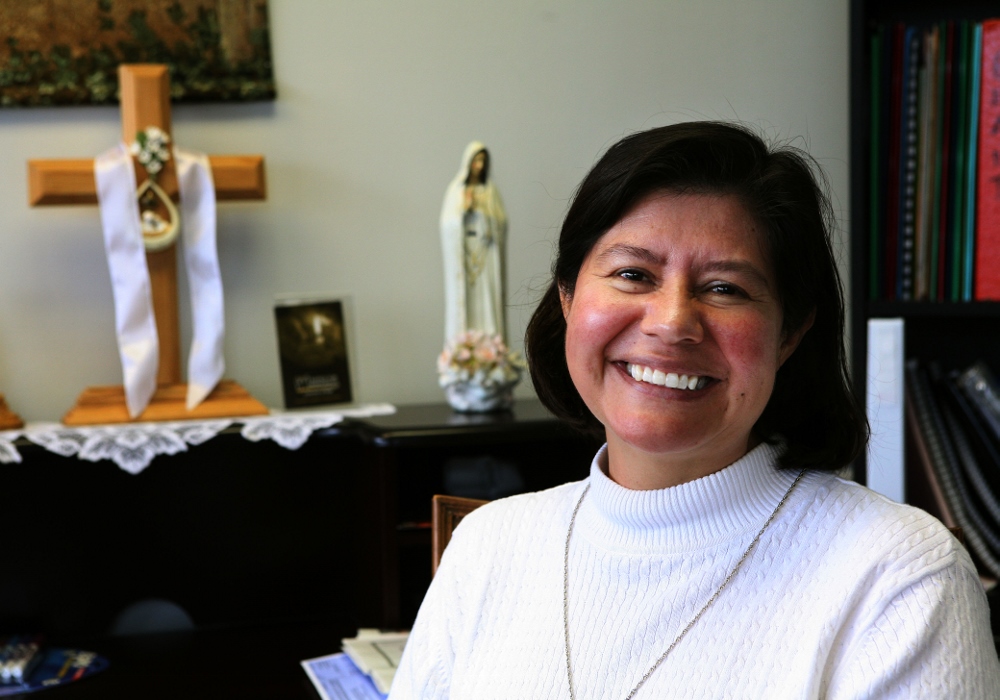 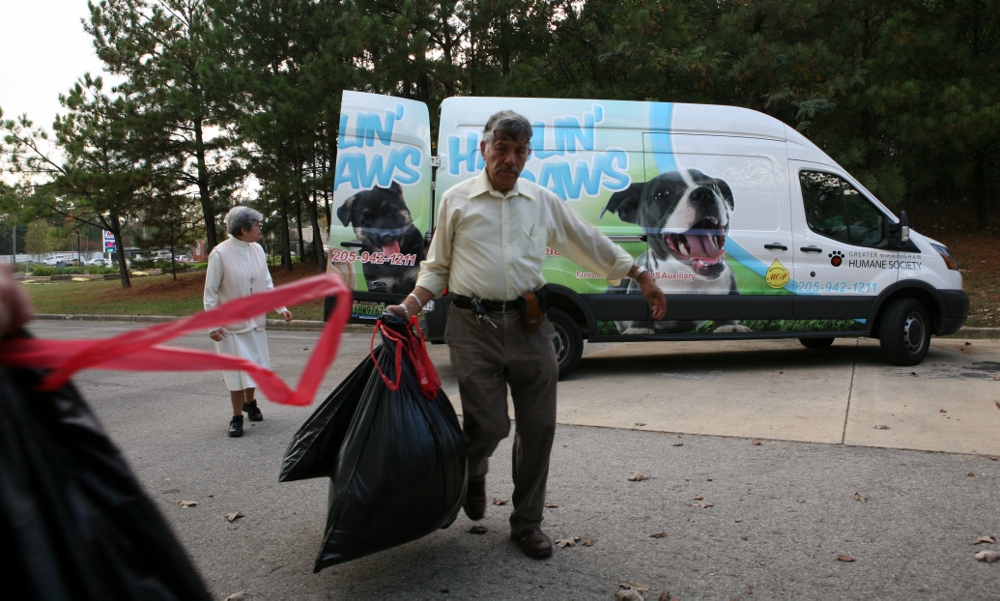 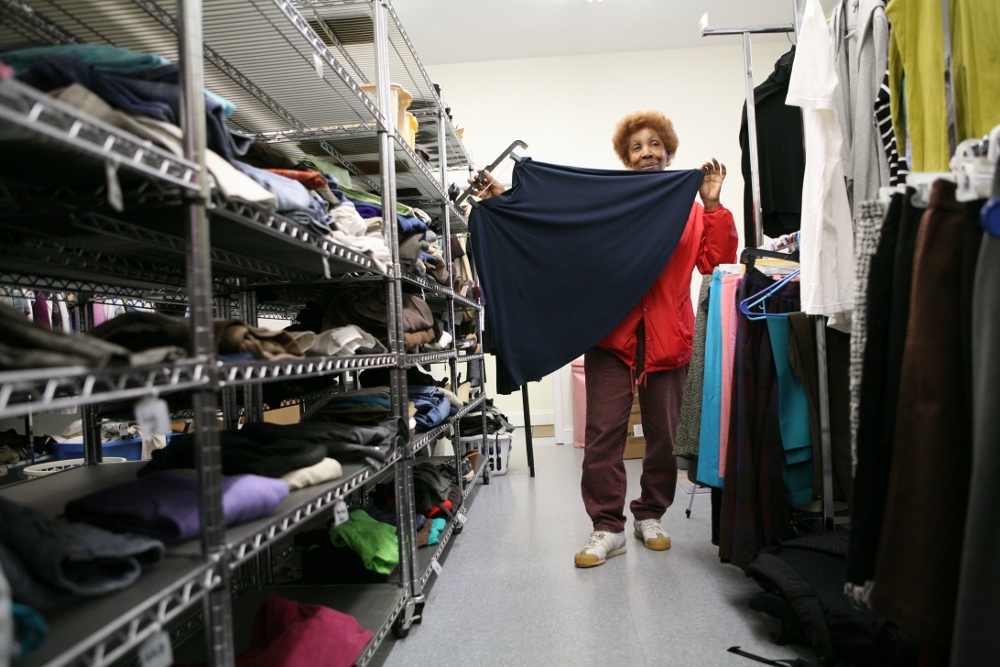 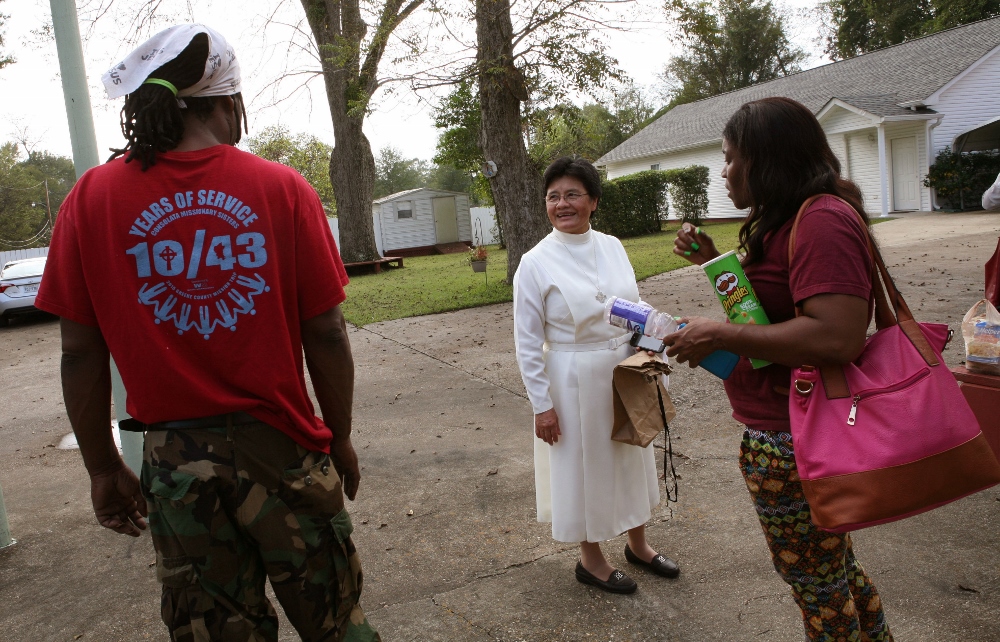 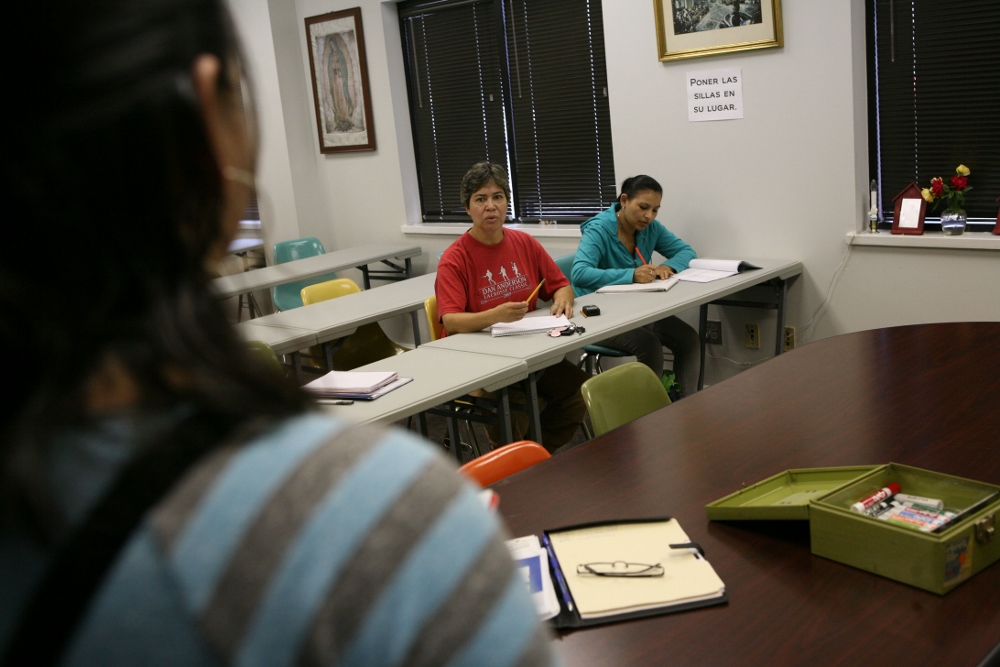