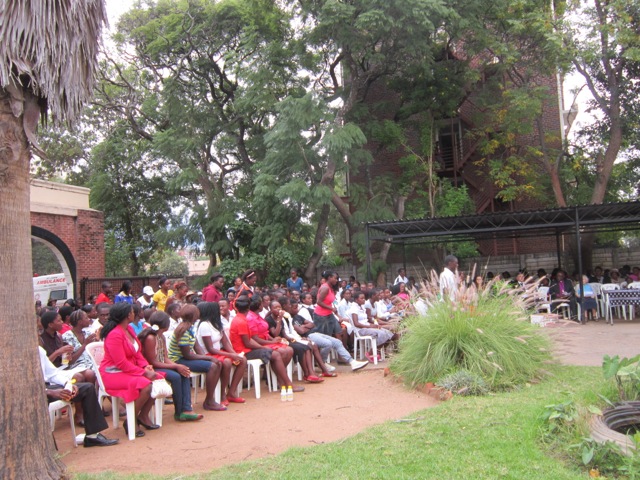 Five hundred teenagers gathered in their very best clothes at St. John’s headquarters for their graduation ceremony. “They earn a dollar here, a dollar there, and they buy a shirt, a skirt or a couple of dreads for that. Bit by bit they build up a smart wardrobe,” said Clara Mutambiwa, course co-ordinator. (Jill Day)

Harare, Zimbabwe — Children here are often orphaned by AIDS. Perhaps the worst part is caring for their dying parents when they don’t know what to do.

In a country with one of the highest rates of people living with HIV/AIDS, children too often assume roles as caregivers and heads of households. Helping those children learn practical skills to attend stricken parents and grandparents became a mission for Dominican Sr. Dominica Siegel, a long-time educator in Zimbabwe.

Working as an administrator at St. John Ambulance, an international organization that trains people in first aid, Siegel set out to design a course, known as home-based care for child-headed households. And Siegel has been determinedly raising funds for it since 2007.

To date, more than 5,000 young people have been trained in and around the capital of Harare and in the two major cities of Bulawayo and Mutare. 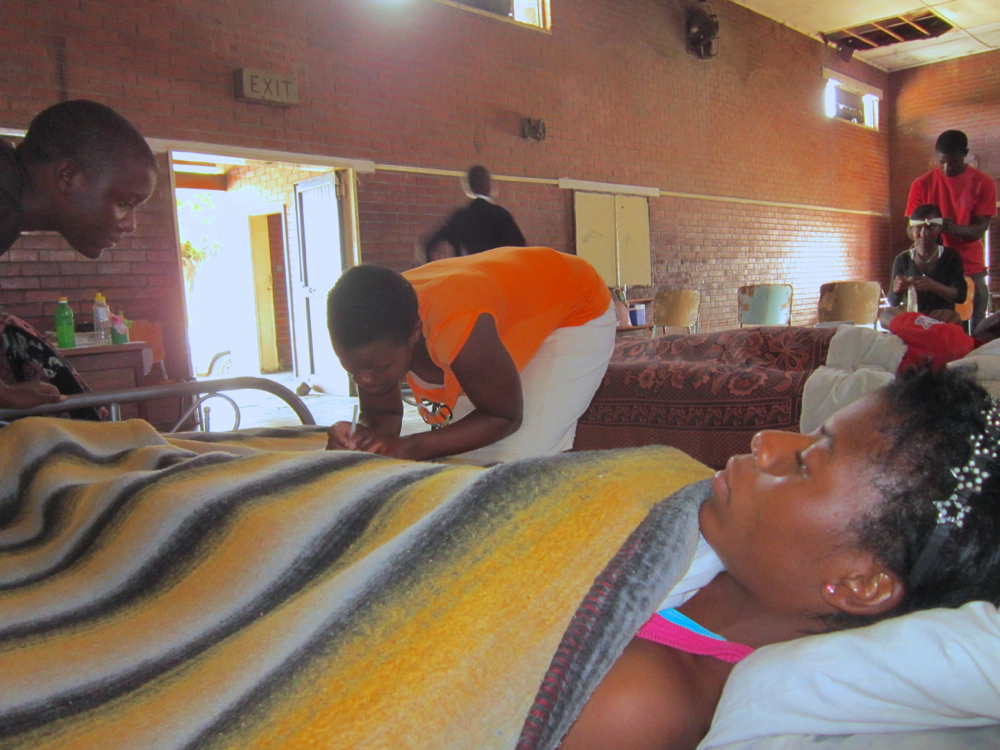 “In April, 500 students who head their households received certificates in home-based care,” Siegel said. “Their delight is overwhelming — for most of them, it is the first time they have had any recognition and here they are, surrounded by their peers, receiving a certificate that tells the world that they can help family members who are ill die with dignity . . . .”

I’ve seen the effects first-hand as a volunteer with St. John Ambulance for four years.

And a recent graduate, Judith Mpemi, told me her training taught her more than how to change sheets for a bed-bound patient, fix nutritious food for people on anti-retroviral drugs and to administer morphine. She cared for her mother.

“The course helped me to recognize the signs of death and to prepare the family and the patient,” Mpemi said. “She was restless and semi-conscious at 3 a.m. [precise patient records are part of the course], and I sat with her the whole night.

“She was comforted when she felt my hands on her. I was empowered by St. John and I knew what to do when she was dying, even though my heart was breaking. I was with her when she passed, and I could help the family deal with the emotional and practical sides of her death.” 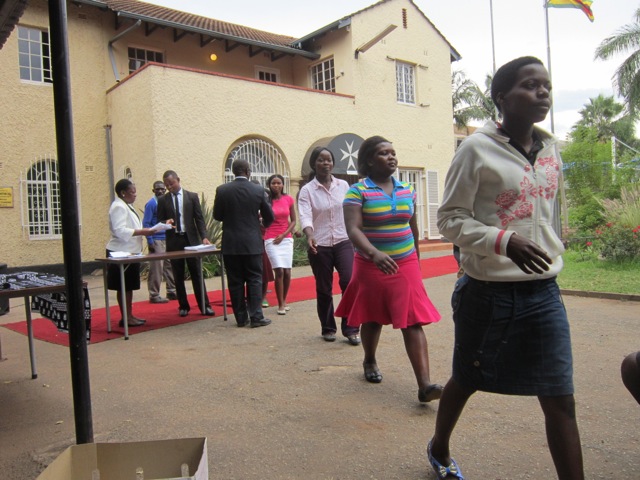 Clemence Muzondo, treasurer, congratulated all 500 participants at the graduation while Clara Mutambiwa, course coordinator, gathers their certificates together to give to each group‘s trainer helped by Tafadzwa Banda, a social work student on work experience from Bindura University. (Jill Day)

Two weeks later, Mpemi was nursing a woman with terminal diabetes. “She isn’t a relative, just a neighbor, but St. John has taught me to help my community.”

Each course for 64 students costs $1,000, which is raised through donations. Community workers in the poor suburbs identify youngsters who will benefit from training, which is free. Students also receive bus fare and food for the week-long course.

“For many of them, it is their first contact with a responsible, caring adult, and we often end up as surrogate parents,” said Gogo Wazara, who runs home-based care courses.

“Just having someone to talk to, to contact for advice when their families are terminally ill, helps a great deal: some trainers have taken an additional course in counseling . . . . The other youngsters they meet become a peer support group too.”

The course also becomes a lifeline to job opportunities in a country with high unemployment. The training and certificate program can lead to work as paid care-givers in hospitals, clinics and private homes, a point of pride for Siegel.

Moreblessing Mushonga, 22, joined the course because a friend did it some months ago and now is working in South Africa. She lives with her grandmother and bedridden mother. “I want to help them now and then I hope to get a job as a nurse aide, too. This course is the way to do that.” 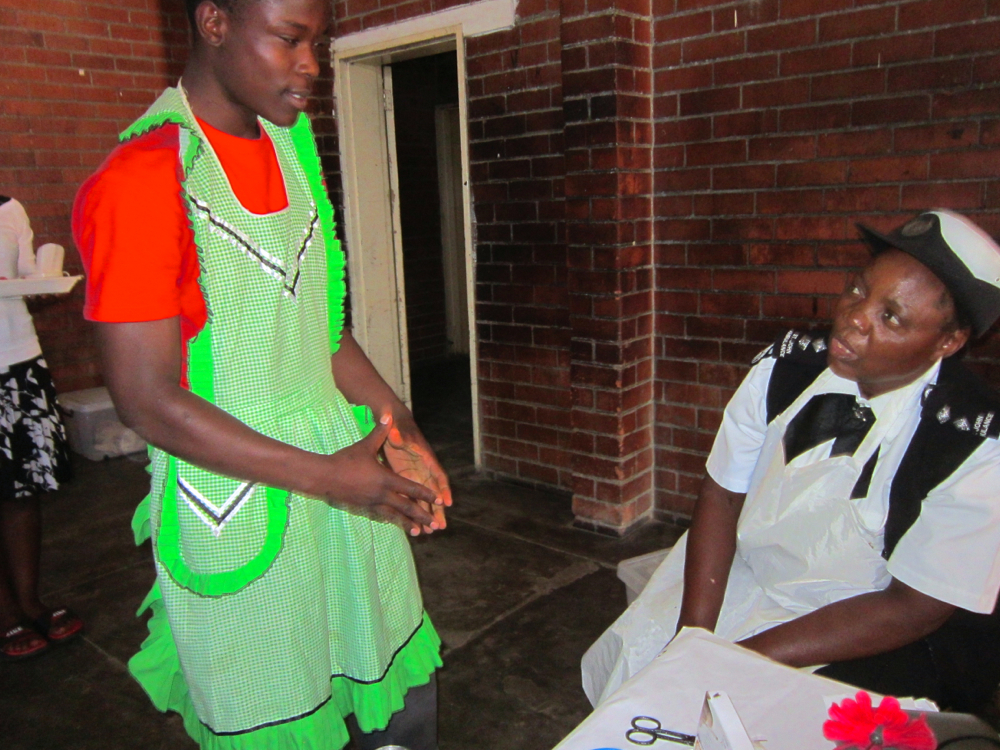 Maria Godoba (right) listens critically while Talent Gambazeni explains how he intends to dress the “wound” on her leg with what he had prepared on the dressing tray from the various items laid out on the St. Mary’s community center’s stage. Axilia Makokowa waits behind him with her tray for her turn under the gimlet eye. Maria Godoba and Gogo Wazara are sisters: both were teachers and then joined St. John Brigade seven years ago. “Gogo persuaded me. I am the middle one of three: she is the baby – and we are all orphans: our parents were killed in an accident before we were teenagers. That’s why I do this job: to teach these orphans that, even though they have lost both their parents, they too can be somebody.” (Jill Day)

Nursing family members is not the only challenge facing these children who have ended up as heads of their families. Often only teenagers themselves, they care for their younger brothers and sisters, trying to find them shelter, food, education.

Sometimes other family members take them in but, in rapidly deteriorating economic circumstances, the space the orphans take up and the food they eat are increasingly resented.

Emma Makoni, 18, lives in a single room with her bedridden parents and her younger brother and two sisters. She receives no financial help and makes do as best she can, while nursing her parents.

“I wrote my school leaving exams last year but I can’t get the results because I haven’t paid the fees,” she said. Makoni hopes the course will lead to a job so she can have money to find out how she did.

“More and more we find our little families eking out an existence under bridges, on rubbish dumps, in alleyways under cardboard boxes, frequently abused and often beaten by older groups of street children,” Siegel said. “Child trafficking is rife and the authorities are doing nothing.”

A recent success was starting courses at a former farm, now a new resettlement area with no water, roads, electricity, schools or housing.

“It took months before we received permission to conduct courses there,” Siegel said. “I had to go repeatedly to the government office to explain what we are doing and at first we had to have a police escort to ensure that we were only training young people in home-based care. Now we are welcome and the authorities are allowing us to use an old house for our courses.” 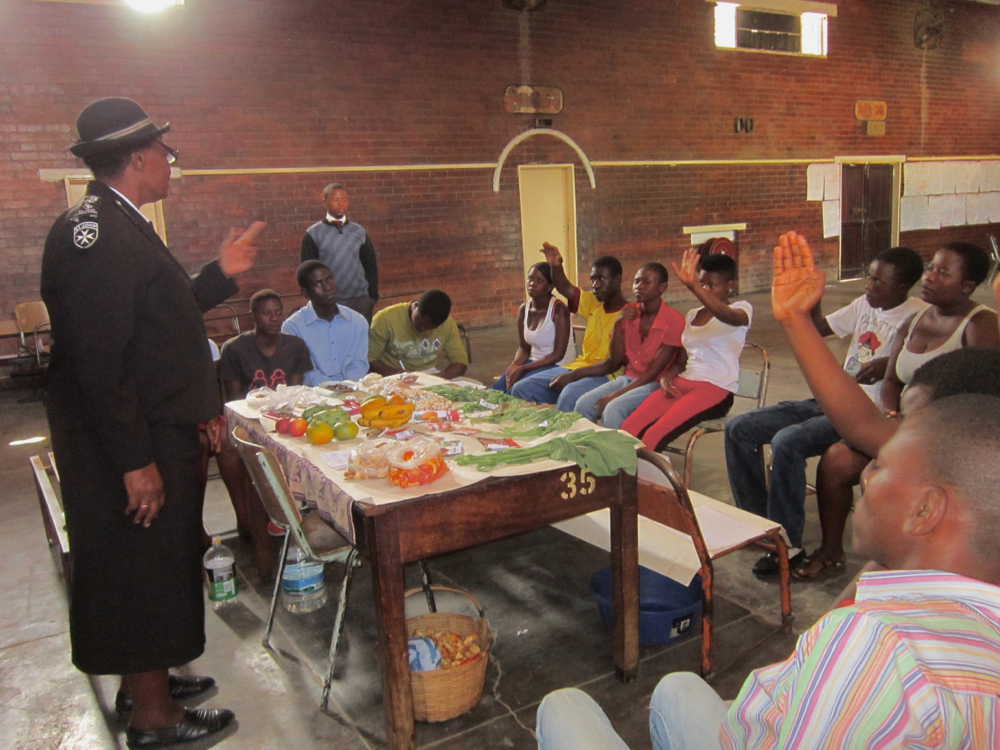 How to prepare the correct diet for an invalid when you are poor? Gogo Wazara, a St. John Brigade commissioner, tells her students not just what people should eat, but the free food they can find in the bush and roadsides to give their patients the balanced nutrition they need. She illustrates this with pictures or real samples. (Jill Day)

Before joining St. John Ambulance in 1998, Siegel had a long career in education. Trained to teach children up to 15 years old, she taught in various rural schools, ending up as headmistress, before becoming personal assistant to Zimbabwe’s minister of education shortly after independence.

At the recent graduation,  500 children in and around Harare received their certificates at a colorful ceremony at St John’s national headquarters. Instructors were there to support their graduates and sang and danced in recognition of their achievements.

“The children have to write a test at the end of the course and 95 percent pass,” Siegel said, “which is a great achievement for youngsters who have not completed their education.”

Guest of honor Clemence Muzondo, from St. John Ambulance, urged the students to value what they had learned.

“You understand now how to care for people: it is critical that you apply this knowledge and take care, first of all of yourself, then your family and next your community,’’ Muzondo said.

“This certificate is like a passport: it gives you meaning. Now you must value yourselves. When you see someone who is sick, you must help them, and if this is at work, even in a temporary job, it could lead to a longer contract for you.

[Jill Day is a contributing writer and editor in Harare.]

'¿Quieres más comida?': learning to be in community