In India, Missionaries of Charity will again offer children for adoption 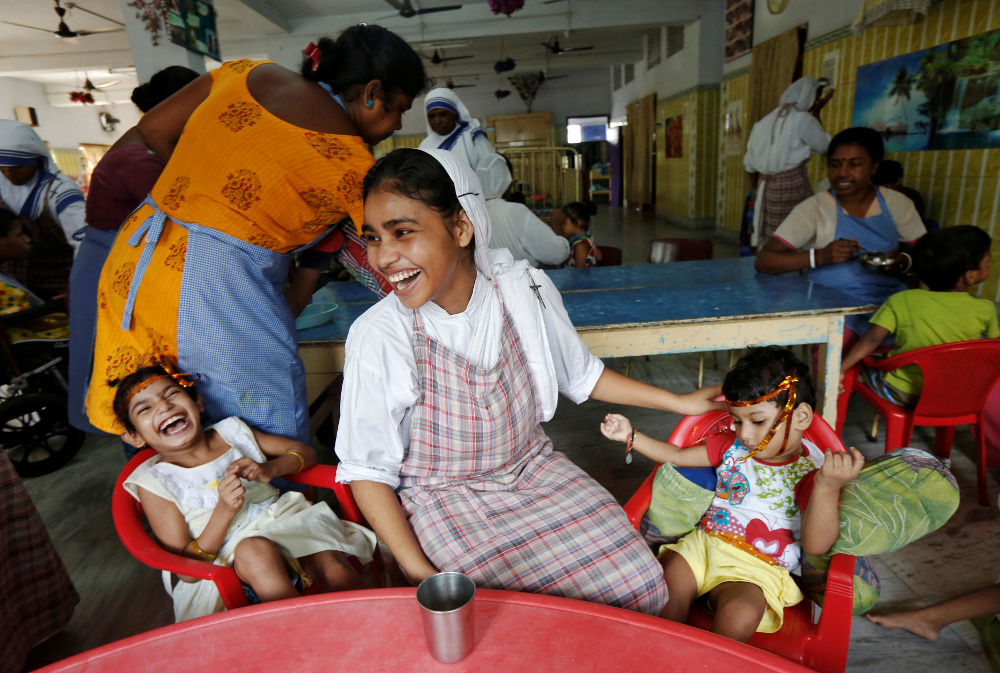 A member of the Missionaries of Charity laughs as she interacts with children in 2016 at Nirmala Shishu Bhavan, a children's orphanage founded by St. Teresa of Kolkata in India. (CNS/Rupak De Chowdhuri, Reuters)

New Delhi, India — The Missionaries of Charity congregation has agreed to resume its service of offering children for adoption.

The congregation founded by St. Teresa of Kolkata, commonly known as Mother Teresa, discontinued giving babies from their orphanages for adoption in October 2015 after disagreeing with a new federal law that allowed single and divorced woman to adopt children, reported ucanews.com.

The congregation has revised its stance and will join the centralized adoption service system set up by the government, said Maneka Gandhi, who heads the Ministry of Women and Child Development.

A delegation of three Missionaries of Charity, including Sr. Mary Prema Pierick, met the minister Oct. 29 and decided that children in the nuns' 79 homes can go into family care, ucanews.com reported.

In a Nov. 2 statement, the nuns said they had agreed to register all their child care homes with respective state governments as mandated by the Juvenile Justice Act of 2015.

Gandhi has asked them to undergo registrations of all their homes and link them with specialized adoption agencies who would carry out the placement of children declared legally free for adoption.

Most Missionaries of Charity homes for children are already registered and the remaining homes are in the process of completing registration formalities, the release said.

"It is mandatory for every orphanage to get registered with the state government, and children in an orphanage will go for adoption irrespective of the concerns of those who run it," said Sr. Clara Animuttil, who runs an orphanage in Madhya Pradesh state.

"Orphanages without registration run the risk of closing down and the government offers no exception to anyone."

Pierick did not explain why the congregation had revised its stance.

The meeting with Gandhi was the first since July, when her ministry ordered all states to carry out inspections of all children's homes run by the Missionaries of Charity following allegations of the illegal sale of children at a home in Ranchi, the capital of Jharkhand state.

Missionaries of Charity Sister Concilia, who ran the Ranchi home, was arrested. She remains in jail after Jharkhand's High Court rejected her bail application Oct. 30, saying her release may hamper investigations.

Pierick said the nuns were praying that the collaboration between the congregation and the ministry "will serve for the good of God's children in need of love and care."

Ministry | In India, Missionaries of Charity will again offer children for adoption

At Lekòl Jezi-Mari, little by little, the bird builds its nest