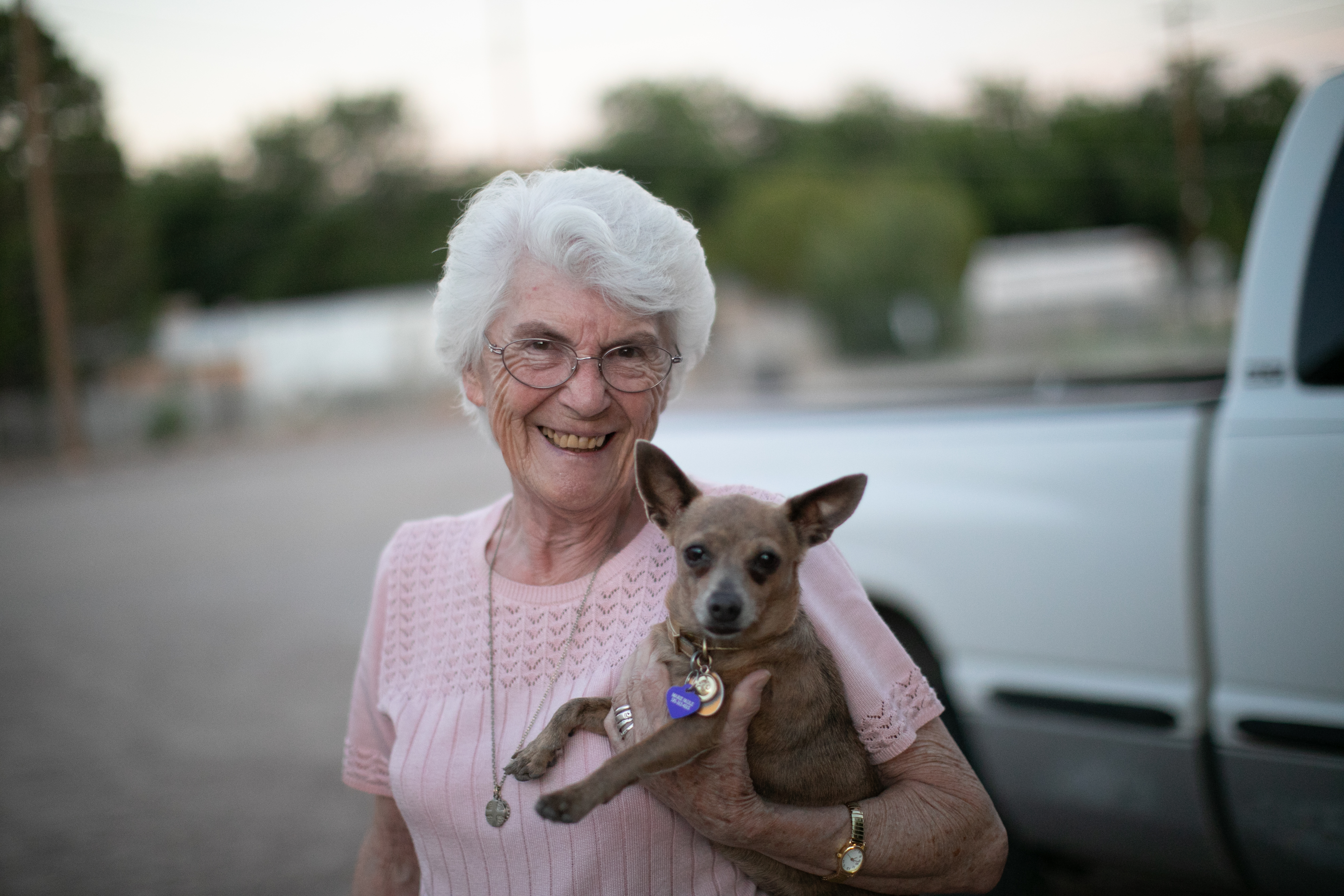 Sr. Marie-Paule Willem, a Franciscan of Missionary of Mary, poses for a photo Aug. 27 in Dona Ana, N.M. She was awarded the 2018-2019 Lumen Christi Award by Catholic Extension for her missionary work in the United States. (CNS/Catholic Extension/Rich Kalonick)

Chicago, Illinois — Sr. Marie-Paule Willem, a Franciscan Missionary of Mary, who has been serving the poor in the U.S. and around the world for more than 60 years, will receive the 2018-2019 Lumen Christi Award from Catholic Extension.

"Working across many countries, Willem believes strong families are the foundation of the church and society," said the news release announcing the award Nov. 19.

The Lumen Christi Award is the highest honor bestowed by the Chicago-based national organization, which raises and distributes funds to support U.S. mission dioceses, many of which are rural, cover a large geographic area, and have limited personnel and pastoral resources.

The recipient is chosen for best demonstrating how the power of faith can transform lives and communities.

Willem, who is 85 and speaks five languages, is currently in ministry in the Diocese of Las Cruces, New Mexico, where she serves women in detention and leads a growing parish along the U.S.-Mexico border as pastoral administrator.

Nominated by her bishop, Willem was one of 47 nominees this year and one of eight finalists.  As the Lumen Christi recipient, Willem and her diocese will share in a $50,000 grant.

Born into a large, Catholic family in the city of Bruges, Belgium, Willem has early memories of World War II and the Nazi invasion, fleeing with her family as the bombs fell around them. They were eventually liberated by Allied forces. At age 23, she joined the Franciscan Missionaries of Mary, "who serve where the need is greatest and where no one else wants to go, among the poorest and most forgotten," Catholic Extension said.

She ministered in Argentina, Paraguay and Uruguay in the 1970s during times of military dictatorships and political upheaval.

"She was part of the church's advocacy and social justice efforts to help the condemned, who were put in outdoor 'corrals' and left to starve. For her mission, she risked her life, received death threats and was ousted from the region," the news release said.

Still wanting to work with the poor but knowing she could not return to Latin America, she found an opportunity in the Rio Grande Valley of Texas.

In 1980 Willem joined her community in Roma, Texas, a border town, and became director of religious education for a parish. She led bilingual programs in catechesis for children and worked with incarcerated women at a detention center

She then moved to the Diocese of Las Cruces to serve migrant farmworkers and immigrants. At age 80, she became pastoral administrator at San Jose Mission Church in Dona Ana County, New Mexico, a mission church in a working-class neighborhood. It had only a handful of parishioners and no full-time pastor.

"When I arrived, it was so sad here," Willem recalled. "The buildings were falling apart, and no one seemed to care."

She started walking around the neighborhood, telling people about the parish and asking what they needed.

She started building up the community and the church itself -- the liturgy, the buildings, the ministries and the grounds, which are now full of gardens. The parish hall was recently remodeled, and the church received updating.

Today the parish has more than 200 active families; about 35 people attend Mass on Saturdays and nearly 100 on Sundays.

"Sr. Marie-Paule has turned the parish around," said parishioner Irma Chavez May. "The church was in bad shape, and few people came. It is beautiful now and so many attend Mass, it's hard to find parking on Sunday."

Added Irma's husband, Robert: "She came with a vision, enthusiasm and a passion for the church. She has gotten everyone involved and keeps us connected. If she wasn't here, this parish would likely have closed."

At the Dona Ana Detention Center, she about 60 women. She gathers weekly with them, "using poetry and heartfelt meditation, helps them find hope, dignity and self-confidence," Catholic Extension said. She also works with immigrants, tutoring them, teaching them English and helping them prepare for citizenship.

"Sr. Marie-Paule teaches us that war, persecution and suffering cannot extinguish the light of Christ," said Fr. Jack Wall, president of Catholic Extension. "Most importantly, she shows by her example how ordinary people can become the light of Christ that brilliantly shines for others."