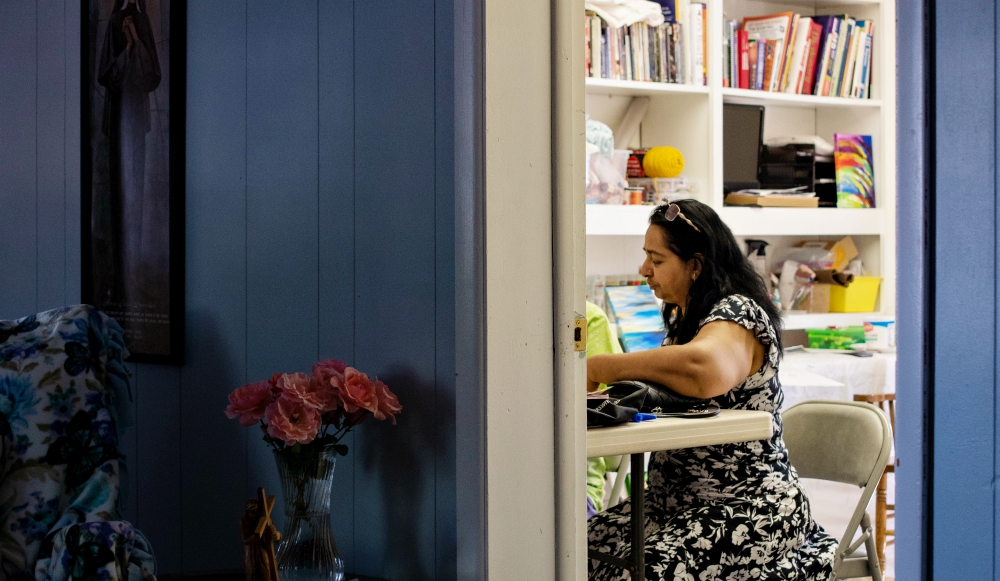 Pramela, one of the women who live at Mariposa Ministries in Portland, Oregon, works on her English in the classroom with Sr. Lucinda Peightal of the Sisters of the Holy Names of Jesus and Mary. (Benjamin Derrell Thompson)

Portland, Oregon — Delphine Busch sits in the dining room of her house in Portland, Oregon, reflecting on how it has become a home over the last year.

"I wanted to create and be a part of some place that was more than just living arrangements," she said. "An intentional community was my goal."

Mariposa Ministries, which takes its name from Busch's love of butterflies and the hope they symbolize, is a collection of five women — four refugees and Busch — who live together under one roof with the support of the Sisters of the Holy Names of Jesus and Mary. Busch modeled the format and values of Mariposa Ministries after the Holy Names House of Peace in Manitoba, which focuses on creating family for the people who live there. Each woman is encouraged to have career and personal goals, and learning English is a priority.

They always eat dinner together, but with their diverse backgrounds and palates, Busch said, each woman usually has a different plate.

"We eat together, but separately," she said with a smile.

Busch is a transplant to Oregon from the Midwest, and she can't handle any spice in her food. Mahshid is from Iran, and she's an adventurous eater. Pramela from Sri Lanka likes to cook the most, and Jasmine, originally born in the States but now returning after living nearly her whole life in Guadalajara, Mexico, is happy to eat the American staples Busch prepares, like hamburgers and hot dogs. Terhas, an Eritrean woman, is eight months pregnant, so "I'm hungry all the time. I'll eat anything." (The women asked to be identified only by their first names.) 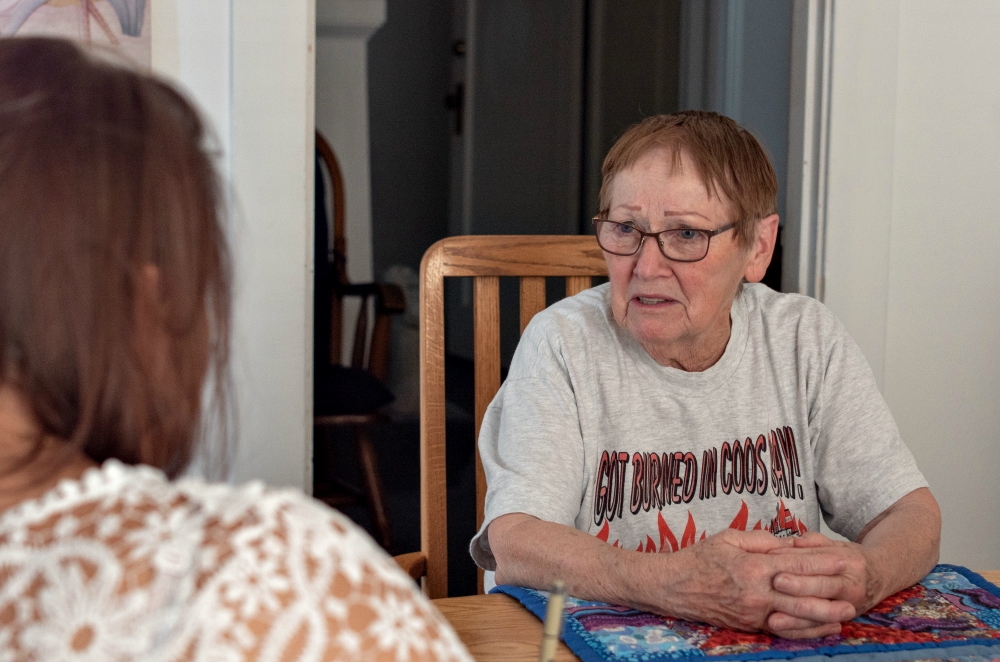 Delphine Busch, an associate of the Sisters of the Holy Names of Jesus and Mary (Benjamin Derrell Thompson)

Refugees offered a place at Mariposa Ministries are shown the community guidelines, which include requirements to participate in household chores and group activities, before accepting the placement so that they have the chance to consider if a family model is right for them. Each of the current residents said they had looked forward to a family environment after long journeys of tribulation.

Mahshid, who has been at Mariposa Ministries the longest, said, "Delphine helps us all the time with everything so that we can learn English better, find jobs and have our best life here."

When each woman arrives, a caseworker accompanies her, but Busch and others at Mariposa Ministries know almost nothing about her. All they know is her country of origin and where she comes from most recently.

Over their first couple of months, Busch learns her story. Each woman has various parts of her journey she prefers to keep private, but Busch is there to hear anything and offer any support she can.

She said she has no qualms about the language barrier and sees every day as an opportunity to teach and learn.

Both Busch and the women struggle with the culture shock that comes with getting to know one another. "Occasionally, we still offend each other," Busch said.

Learning English is such a high priority for the women that Busch knew she would need extra help. Their best resource is Holy Names Sr. Lucinda Peightal, who travels to Mariposa Ministries every other day to work with the women on their English, using Bible passages and short books in a small classroom space off the living room.

Peightal has been teaching English as a second language to children for most of her career, and she said teaching the women at Mariposa Ministries is the same.

"They need slow and they need simple at first," Peightal said. "We do spend time translating need-to-know things like job applications. Mostly, we just chip away at figuring out all the basics."

Even though she doesn't speak any of the languages the women do — Spanish, Farsi, Tamil and Arabic — the women turn to Peightal when they need help.

"Learning English is such a barrier, and without Sister Lucinda, we'd be much slower at everything: getting to know one another, finding the women jobs, even just enjoying their experiences here," Busch said. "Without her, they'd be much farther behind because I'm just not as slow and steady as she is." 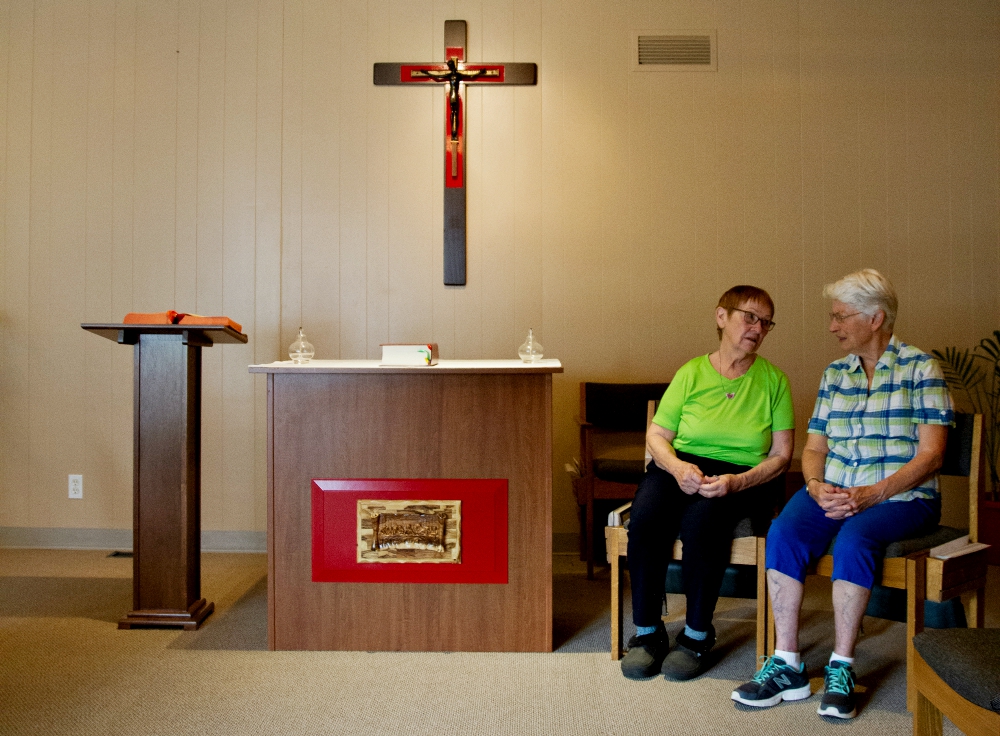 Delphine Busch, left, and Sr. Lucinda Peightal of the Sisters of the Holy Names of Jesus and Mary chat after a Monday morning service in the chapel at St. Peter Catholic Church in Portland, Oregon. (Benjamin Derrell Thompson)

'My home was too big'

Busch, 74, found herself missing the feeling of home after her children grew up and her husband died in February 2016. She began to reach out to women on the margins.

"My home was too big," she said. "I actually started to search around for a way to invite refugees in back then, but I was met with a lot of not-in-my-neighborhood attitudes."

Busch has been finding ways to help people for most of her life. In the 1980s, her family took in a Vietnamese family displaced by the Vietnam War.

"They got on their feet and became lifelong friends," she said.

Toward the end of her career teaching at Catholic schools, before she transitioned to a mentorship role for new teachers, she tutored a girl who needed extra help with her homework because of a language barrier.

"She only spoke Spanish at home. Eventually, I met her mother and I found out more about their situation, and I just had to help them," she said.

The mother had separated from her husband because of his increasing alcohol issues. She spoke almost no English; her daughter acted as an interpreter.

"They both moved in with me, and they became like my children," she said.

Busch decided to become an associate of the Sisters of the Holy Names after years of teaching alongside sisters from the community. She made promises to uphold the corporate stands of the order, including a commitment to solidarity in many forms with migrants and refugees. 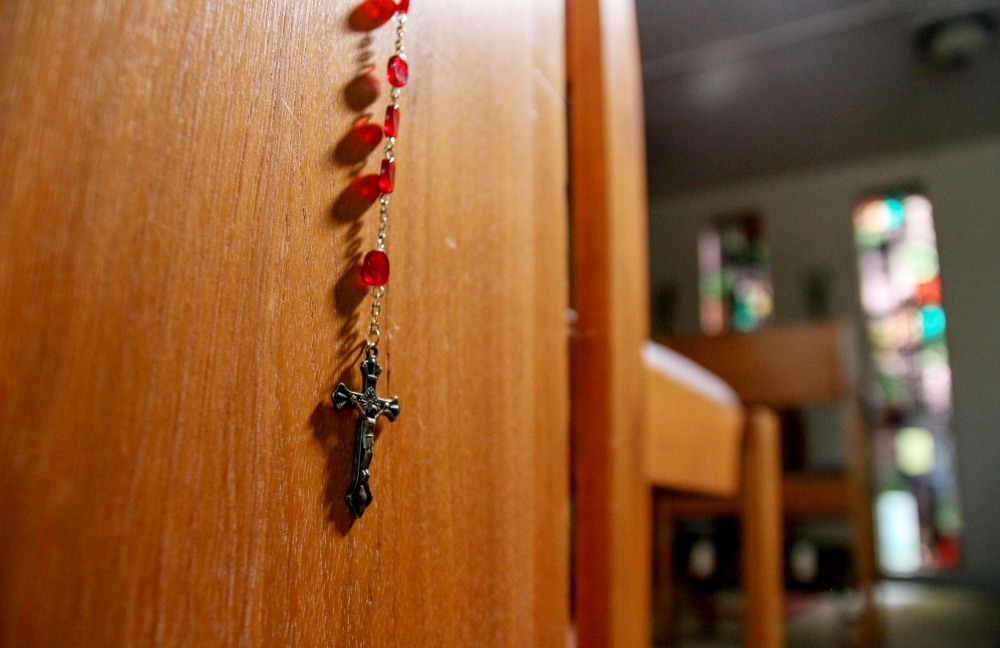 A rosary hangs in St. Peter Catholic Church, which owns the house that became Mariposa Ministries in 2017. (Benjamin Derrell Thompson)

Busch spoke about her dream to create a community with and for refugee women to a group of sisters she had been meeting with for several years. At the time, the Sisters of the Holy Names had been visiting different parishes to learn the Portland community's needs. In particular, they wanted to offer housing. As they aged, many of the sisters had been moving into smaller houses or retirement homes. What were they to do with the houses and the belongings they were leaving behind?

Eventually, they found an option through their connection with St. Peter Catholic Church in southeast Portland. The parish owned a home, House of Mercy, on the same block as the church, but it had been worn down from heavy use by its previous tenants, people who had been homeless for an extended time and were struggling with drug addiction.

Fr. Raúl Márquez, St. Peter's pastor, knew this arrangement could not continue for much longer, as the home had been dirtied and damaged and needed a new purpose. In February 2017, after Busch and the sisters presented their plan to him, he promised them use of the home.

Today, it has a brand-new kitchen and upstairs bathroom provided by funds the Sisters of the Holy Names gathered, some donations and some grants. Busch cleaned and cared for it from top to bottom. The sisters, many of whom are downsizing, donated furniture, home goods and decor.

"I was so excited and so anxious for someone to arrive," she said.

Mahshid was the first to arrive in October 2017. She had fled Iran in 2013 because of violence and found passage to Australia, but she and the other Iranians she was traveling with were denied entry before they even made it there. They landed on the island of Nauru.

"We were stuck in tents, not sure even where we were or how long we would be there," Mahshid said.

Four years later, she and two others were told their opportunity to leave had arrived.

"I do not know why it was me and not my friends," she said. "My friends are still stuck there." 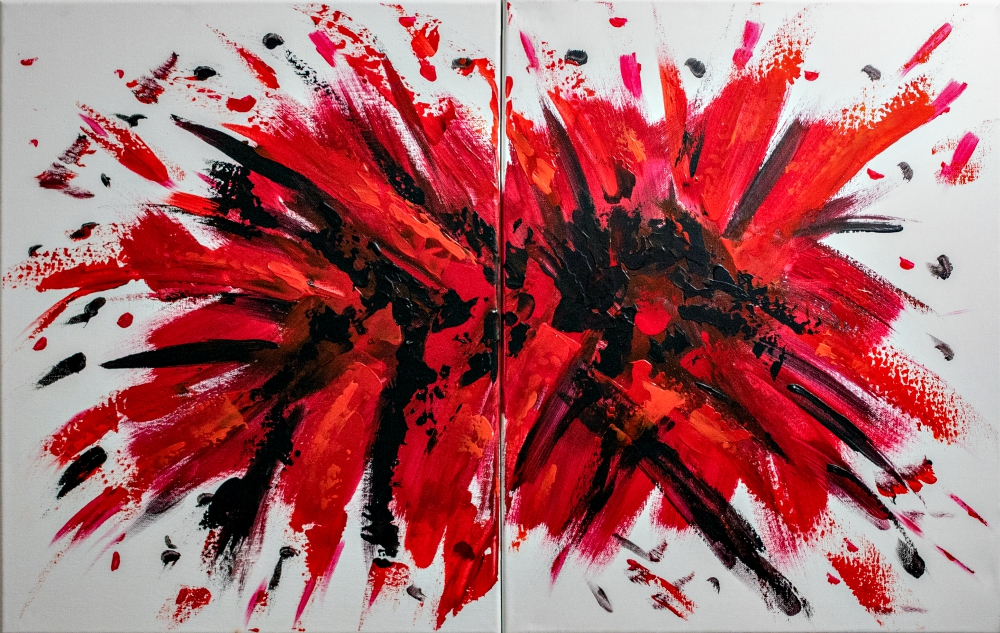 A painting by Mahshid, one of the refugee women who live at Mariposa Ministries (Photo by Benjamin Derrell Thompson)

To cope, one of the first things Mahshid asked for help with at Mariposa Ministries was finding art supplies. For the last several months, she has been painting constantly, and the sisters have helped her sell her paintings.

"I love color, and I love to make people happy with my paintings," she said.

Mahshid also has a business background, a degree in marketing with management experience from when she was in Iran. She has applied to many jobs in the Portland area with help from Busch, but her degree has been an obstacle.

"She's overqualified for her language ability," Busch said. "She's come such a long way and is doing great with English, but her degree makes her look on paper that she should be sent straight to considerations for management positions."

Mahshid said she doesn't get discouraged because she knows that eventually she'll find the right opportunity.

"I have so much help from Delphine. We will find something, I know," she said.

The second woman, Pramela, arrived the week before Christmas 2017 after five years in Malaysia, where she and her husband fled from Sri Lanka. He died suddenly after two years of waiting for asylum.

"I cried for three months, and then I decided I must make my life," she said.

Pramela especially has formed a relationship with Peightal, working the most hours with her each day to learn English. She currently works at a laundry facility.

"I like my job, but I had my own small business [owning and operating a chicken farm] in Sri Lanka. I want to work more," she said. 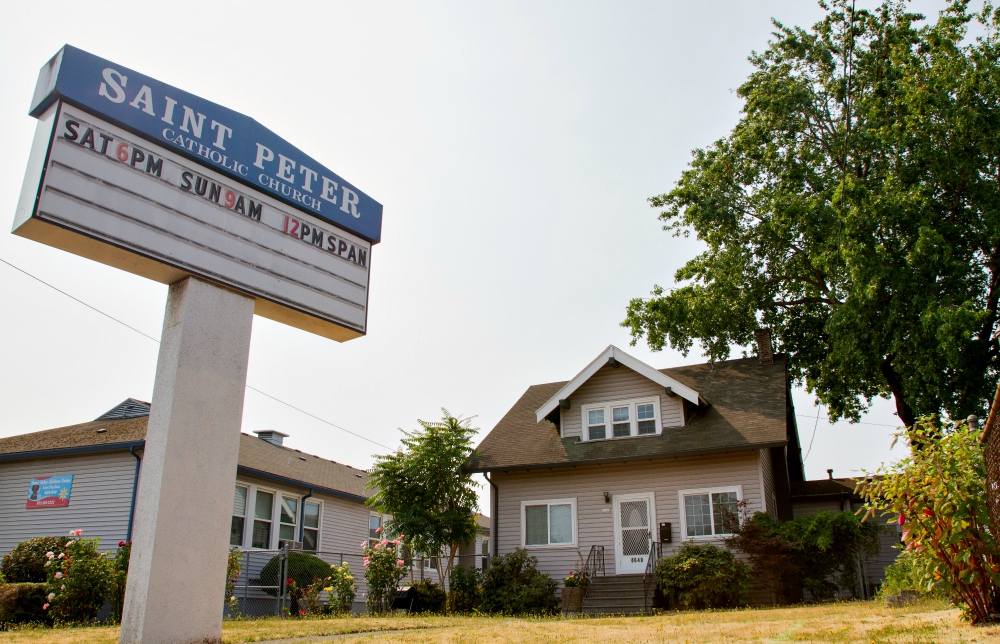 The house where the women of Mariposa Ministries live in Portland, Oregon (Benjamin Derrell Thompson)

Next came Terhas from Malta, originally from Eritrea, in March 2018. A refugee since she was a young girl, she lived in three countries over 10 years to escape gender violence before finding a family in Malta who helped her get refugee paperwork started for the United States. She still eats the traditional African sponge bread, injera, with every meal and has found great friendship and solidarity in the Eritrean community of Portland.

A few months after arriving at Mariposa Ministries, Terhas found out she was pregnant. Her daughter is due in the fall.

Finally, Jasmine, who arrived at Mariposa Ministries in June, was born in California, but her family moved to Guadalajara, Mexico, when she was still a baby. It's her dream to open a coffee shop, and she's currently working as a barista. She is the youngest member of the Mariposa family at 28.

Every day, Busch wakes up and serves these women in any way she can.

"I had the sisters, who gave me security to encourage my dream," Busch said. "I've got a dozen sisters who would be here in a minute if they weren't 85 to 90, but the support and belief they had in me was huge. Many people have big dreams of helping, but they give up because no one encourages them."

[Sidnee Grubb is a freelance writer and publishing manager at Microcosm Publishing in Portland, Oregon.]

Sharing the Gospel through honeybees and all of God's creation