Beshmaya Nepali did not go to work one day last winter, although she knew her wages added to the family income. What was more important for the farm laborer was to accompany her 4-year-old daughter to a preschool managed by Catholic sisters in Bandipur, her village in Nepal.

At the school, the 35-year-old mother helped the teacher and observed how her 4-year-old girl fared in studies. She also learned how to better interact with her child.

“It is a joy to help the teachers in school. I have learned a lot of new things from them and the children,” Beshmaya told Global Sisters Report.

In the school with Beshmaya on that day was another mother, Baishali Nepali. The 32-year-old mother came with her 4-year-old son, whom she says is overjoyed to go to school since he can learn singing and dancing, which are integral to the local culture.

The two mothers are among 108 women who take turns, two at a time and about twice a year, to help teachers and spend school-time with the children at Seto Gurans Child Development Center, in Bandipur. The center, started by Sr. Miriam Kanaya, a Japanese national of the Congregation of the School Sisters of Notre Dame, is making it possible for marginalized children to be educated and is helping to bridge class separation among ethnic groups.

In 1983, four Japanese School Sisters of Notre Dame, including Kanaya and Sr. Evangela Imamura, were assigned by their leaders in Japan to begin the Nepal mission, with the intention of providing educational service in the poverty-stricken country, where instructional opportunities were often very limited.

In Kathmandu, the sisters had been learning the language, school system, and culture of Nepal to prepare them for involvement in adult literacy and teaching in existing institutes, but not to build a new school. The idea for establishing a school began when a teacher, who had taught them Nepali in Kathmandu, invited the sisters to visit the village of Bandipur in early 1985 to consider educating the children there, recalls Kanaya.

Many village children were not attending school because school locations were too far to walk to, and large numbers of villagers had abandoned Bandipur in search of a better education in larger towns. Those who remained held out the hope that a quality, English-medium school would draw the people back to the village.

In May 1985, Imamura and Kanaya began a kindergarten class with fifty children at Notre Dame Secondary School, Bandipur, and added successive classes each year. In 1996, the first class of 10th-grade students graduated; and in 1997, higher secondary education began with grade 11. Each year Notre Dame Secondary School, where Imamura serves as principal, now educates about 850 students from nursery school, which is age 4, through grade 12.

Kanaya, who has a bachelor’s degree in elementary education from the University of the Sacred Heart Tokyo, Japan, had remained involved with the nursery and kindergarten classes throughout the continuous growth of the school. Although the children from the main part of the village were succeeding academically, she realized that those from the poorest area could not achieve even at the nursery school level.

Laborers who cut fodder for animals, hauled slate or wood, or did other menial jobs had little choice but to confine their young children when they worked. Deprived of stimulation, interaction and proper nutrition during their early development, these children needed early intervention if they were to be educated and ultimately find a better way of life — so the early childhood program, or preschool, began.

“If students can’t learn in your school, you have to stop the process and prepare them — and that means going to an earlier age and giving them what they need,” said Sr. Barbara Soete, coordinator for the 11th and 12th grades’ science program, who has worked at the Notre Dame Secondary School since 2006, after initial periods of service that began in 1999. “A child doesn’t come into a nursery school knowing how to sit in a desk or follow directions, and they can’t learn unless they’ve had sufficient nourishment for their bodies and stimulation for their minds.”

In 1995 the preschool classes began in rooms near Notre Dame Secondary School. However, the project had limited success because it was located on the “wealthier” side of the village where poorer people were reluctant to enter. The target group of learners would not participate. Kanaya then made some important decisions. She obtained funding for a new building to be built among the poorest families, and she consulted a Nepali woman who had begun a successful preschool program in Kathmandu.

Agatha Thapa had made a formal study of the Montessori and Piaget methods and had begun a developmental program called Seto Gurans in Kathmandu. The name Seto Gurans ("white rhododendron") was symbolic of Nepal’s relative disregard for the white flower, and admiration of the red; Nepal made the red rhododendron the national flower. For Thapa, poor children, like white rhododendrons, were forgotten.

Thapa was consulted in 1996 as the Bandipur preschool program was developing. She agreed to share the name Seto Gurans, the foundational structures of her program, such as parent involvement and health and nutrition components, and her syllabus with Kanaya. The preschool program of Notre Dame Secondary School, was rechristened Seto Gurans Child Development Center, Bandipur, and relocated to the new building in 1997.

Kanaya enlisted Thapa to train three young people  — two women and a man — in Thapa’s educational method so that they could continue developing the preschool program. Kanaya added a condition: parents had to take turns, at least two every day, to accompany the teachers in teaching their children, while at the same time learning how to relate to their children in interactive ways. The cooperative teaching-learning environment, created to include parents, has made a unique and significant contribution. Over time, Kanaya developed and altered the program to suit Nepali village life. For instance, while learning tools like blocks could be purchased by the program in Kathmandu, parents and teachers in Bandipur used segments of corncobs and brought in pumpkin, eggplant and other vegetables to help the children associate the words and objects.

Two parents bring their children to Seto Gurans at about 10 a.m., and stay with them until the end of the school day, at 3:45 p.m. In addition to observing and helping teachers, parents take roll call, clean children’s clothes, oversee preparing their midday meals, and take care of children’s toilet needs. They also bring their contribution of grains or lentils, used to help feed the children in the afternoon.

Seto Gurans offers children all that they would be expected to know when they enter formal schooling, such as language skills, numbers, colors, seasons, months, singing, dancing, vocabulary in both Nepali and English, and basic arithmetic, said Sharad Kumar Shrestha, Seto Gurans' head teacher. Games and play add to the children’s learning, discipline, coordination and enjoyment of the program.

Shambhu Lal Shahi, a teacher at Notre Dame Secondary School, told GSR that his son had attended Seto Gurans for two years from the age of three. The boy had already learned the English alphabet and other subjects, which enabled him to skip lower kindergarten and move to a higher grade in Notre Dame School.

He and his wife could concentrate on their jobs because his son was attentively cared for in Seto Gurans, he said.

Raj Kumar Shrestha, who works in a brick kiln, says that he was happy that his 4-year-old son attended Seto Gurans. He added that his son has learned many things which an average child in other schools would not get.

Principal Imamura says the cooperative teaching program at Seto Gurans and the success of the children has greatly inspired the villagers. Not only do the children benefit from Seto Gurans, but so do the parents, teachers, and the local government; she told GSR the whole village has been inspired by this instructive method.

Kanaya organizes about three teacher-training programs every year based on the program at Seto Gurans. Teachers from many schools and areas of Nepal participate.

Initially, there was palpable resentment from the high-caste people to wash the clothes of low-caste children and cook food for them, due to the notion of "untouchability" [that some people are unclean, impure or below an acceptable status in a hierarchy of castes], but after some months, they began to accept it as part of the program, Kanaya says.

Another initiative by the sisters also encouraged the people of the village, both men and women, to promote peace among themselves.

“During the decadelong Maoist insurgency in the country beginning in 1996, the school in Bandipur had to close for a year [in 2001], but when we returned to resume working in the school, we were asked what we could do to promote peace-building,” says Kanaya.

Inspired by the community-building aspects of Seto Gurans, Kanaya, with the help and encouragement of the other sisters, decided to set up small, one-room study centers, specially built for the purpose of peace-building through child and family interaction around education. With financial help from Caritas Nepal and the use of land provided by the villagers, groups of about 10 to 20 children gather at the centers daily to enhance their education before and after school hours. The villagers themselves put up 10 study centers in and around Bandipur for the development of their preschool and school-age children. Tutors are provided by the sisters with financial assistance from Caritas Nepal.

The parents also gather at the centers once a week to evaluate the education of their children. These centers have a positive influence on the parents, because they gather with one thing in mind: the education of their children, said Sr. Andre Maureen Soete, teacher and administrative assistant to the principal of Notre Dame Secondary School. While discussing the welfare of their children, they also discuss wider issues pertaining to the village and the country, she told GSR. (She is the blood sister of Sr. Barbara Soete and served 18 years in Japan before moving to Nepal in 2003.)

The hopes of villagers of reviving Bandipur by adding a quality school have been realized as both the Notre Dame Secondary School and the village have grown rapidly, Kanaya told Global Sisters Report. Now granted the status of village-municipality, the contribution of Notre Dame Secondary School and Seto Gurans Child Development Center is widely acknowledged by area residents, Sr. Barbara Soete said. “We have to say that we did not have a plan [to revive the village],” she said. “Our plan was to educate children. It was the plan of the villagers — they knew that something as vital as a good school would draw friends, neighbors and relatives back to Bandipur.”

[Jesuit Fr. Julian S. Das was the editor of The Herald, the weekly of the Calcutta archdiocese, until June 2015. He now is rector of a Jesuit retreat and formation house.] 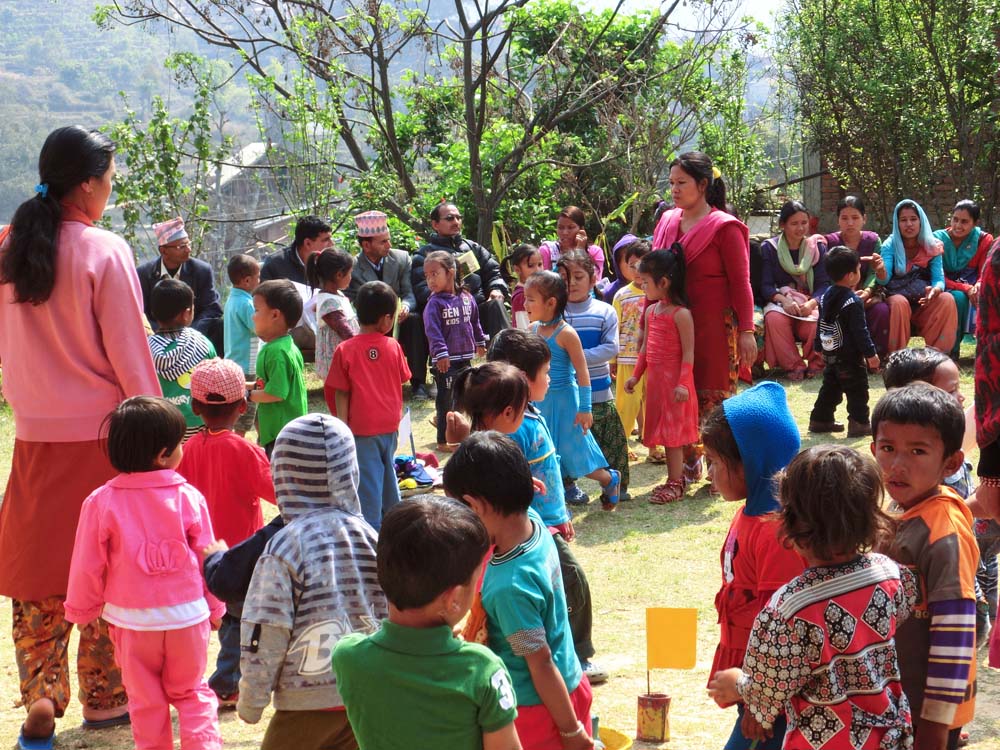 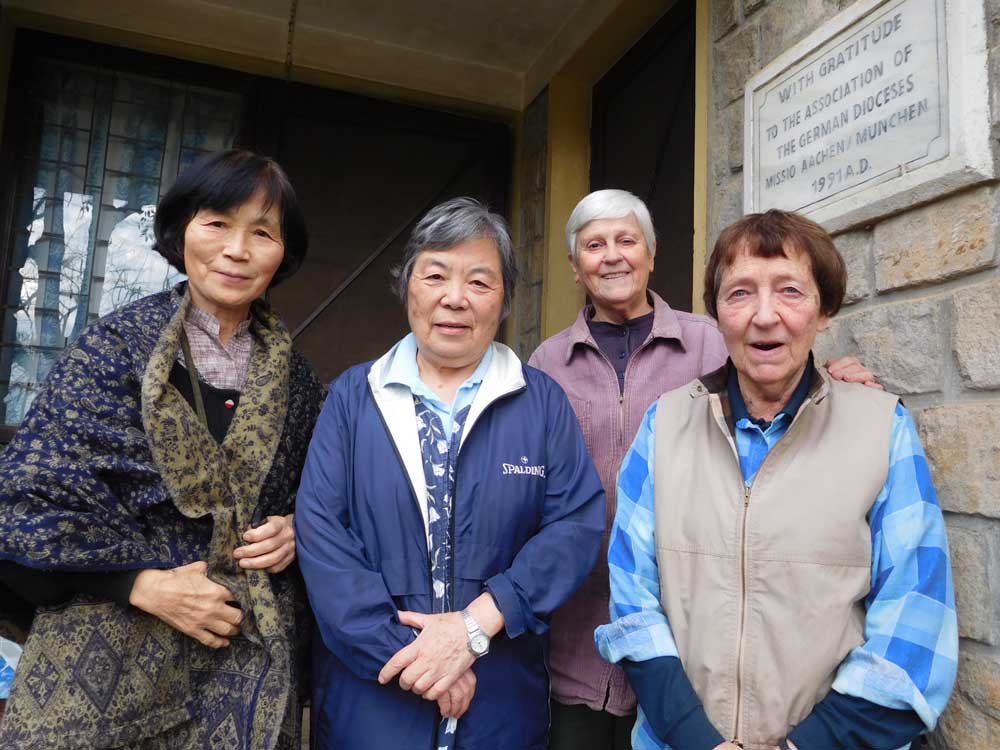 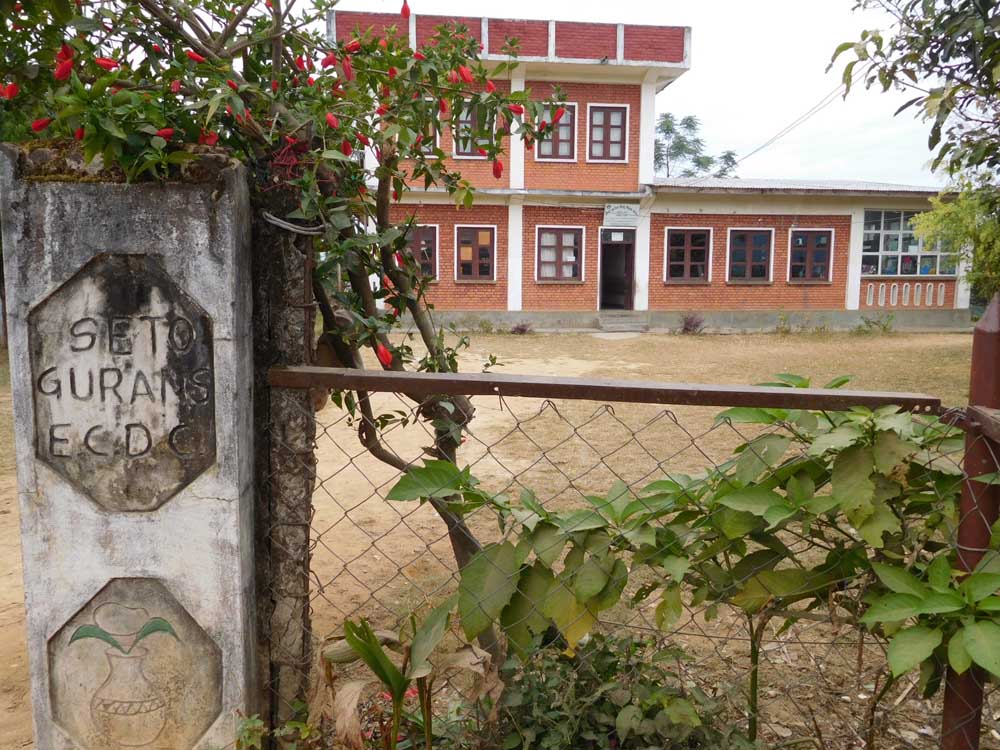 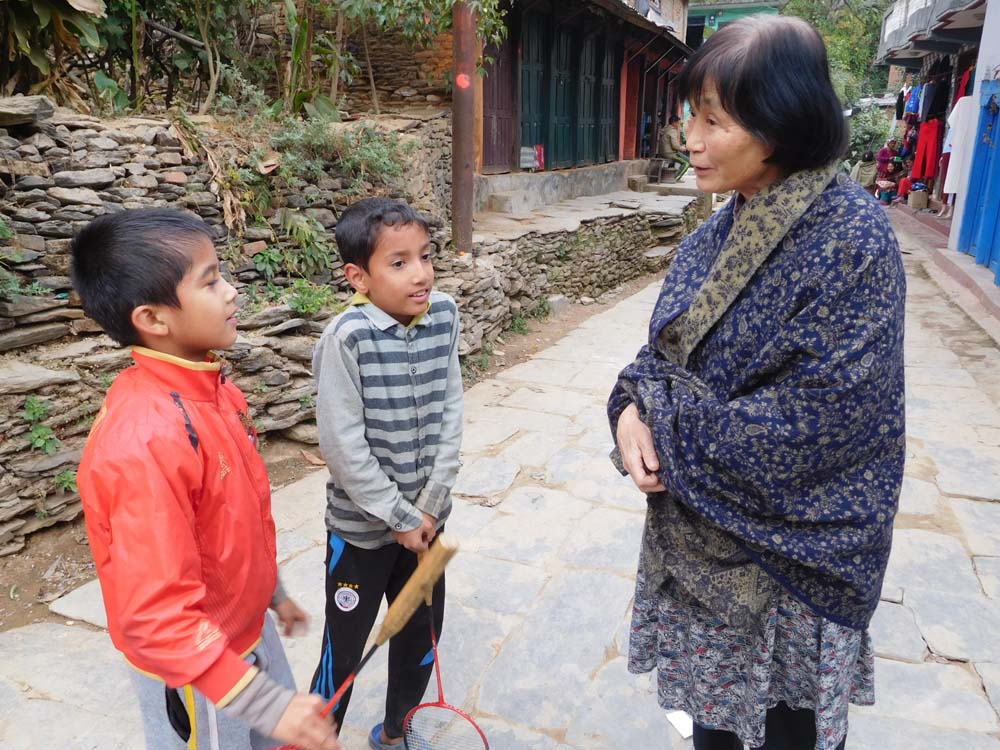 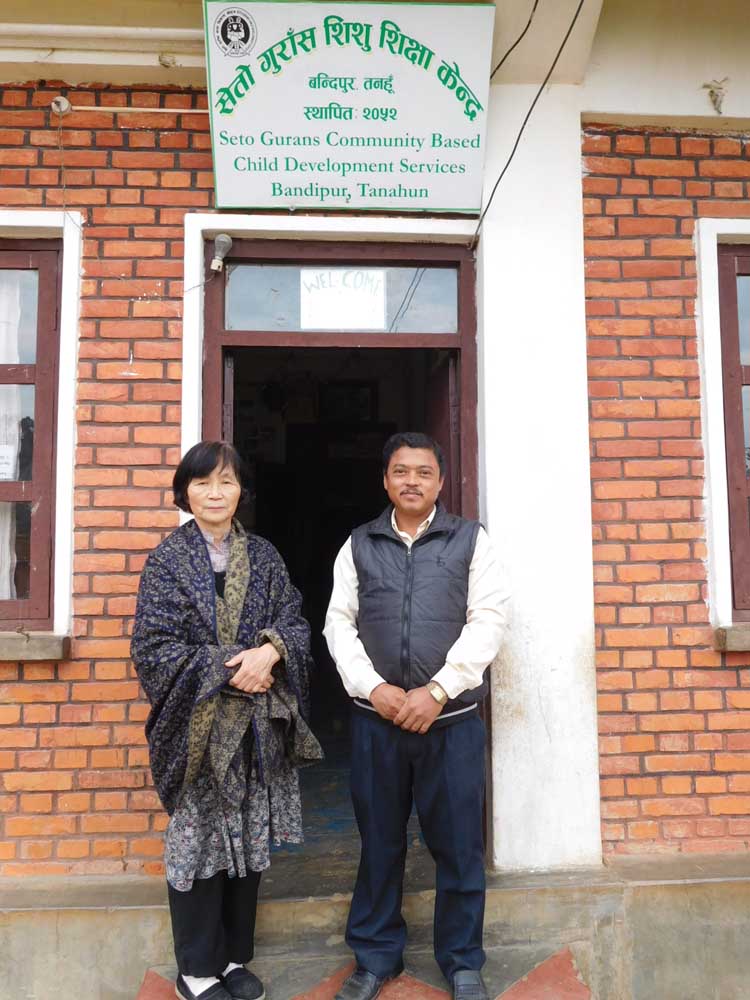