The chapel of Divine Providence Hospital in El Salvador is one of the most visited places by local and foreign pilgrims. They come wishing to learn more about Archbishop Oscar Romero, the controversial archbishop who has become a Salvadoran icon.

In 1966, the Congregation of the Carmelite Missionary Sisters of St. Therese built this hospital under the leadership of Sr. Luz Isabel Cuevas Santana, a Mexican missionary who saw the need to care for cancer patients. It was in the small chapel of the hospital that on March 24, 1980, Romero was killed, shot near his heart, just as he prepared to consecrate the host.

The day before, the archbishop challenged army soldiers for killing their own brothers and sisters. Afterward, some said the bishop was advised to go into hiding, but he refused. He believed he had not done anything wrong by asking the soldiers not to kill, and he was already committed to celebrate a memorial Mass at the hospital's chapel for the mother of one of his friends.

When Romero was shot, the vestments he wore were bathed in blood. After the attack, the Carmelite nuns kept them with the greatest possible care. For a while, the sisters hid his belongings for fear that the murderers would return to eliminate any form of evidence.

"Some of the sisters who were there at the moment of his death rushed out and washed their habits because they were stained with blood," said Sr. Maria Julia Garcia, Carmelite superior and director of the hospital. "They feared for their lives since they had been witnesses of the crime. From then on, things have never been the same at this small dwelling place."

For 35 years, the congregation and the sisters running the hospital have taken care of the relics. Garcia expressed some disappointment at the lack of interest by the Salvadoran hierarchy in preserving the relics during all these years.

"There are not too many things left by Archbishop Romero. This indicates that he lived not surrounded by many luxuries. It shows the simplicity in the way he lived," Garcia said.

"Now that the pope has recognized his martyrdom, everyone is interested Romero, including those who disagreed with his message. We as the moral owners of these relics fear that they will be taken away from us and relocated to another place where they would not be treated with respect," she said.

Romero will be beatified May 23 in San Salvador. Garcia said she is happy that the beatification is just around the corner and is also aware that the government might declare the chapel a National Cultural Heritage. But that would put the sisters in a very awkward situation, because they would have no say in the care of the relics.

"Today, everyone who could benefit with a personal or financial gain is Romero's friend or follower," she said.

Sr. Elvia Elizett Cazun Penate is currently responsible for the archbishop's small house, known as Oscar Arnulfo Romero Historic Center. She is also concerned about the future of his relics.

"Now these relics have become the most precious treasures left by the archbishop. But for 35 years, no one here in El Salvador offered us any help to preserve them; not even the hierarchy of the Salvadoran Catholic church.

"Many locals and foreigners visit this place with great reverence, and they find themselves close to Romero, just by looking at these relics," Penate said. "We encourage all Salvadorans to stop by this center and learn more about Romero."

The only help the sisters have received to preserve these relics is from Julian Filochowski, chair of The Archbishop Romero Trust.

"We have not been selfish with people; the doors of this small museum are open to all those who wish to spend some time at the chapel and the little house," Penate said.

The sisters see with joy the fact that there are images and statues of Romero all over the country. But more than statues and murals, they said, they would like to see the legacy of his message preserved and remembered from generation to generation. 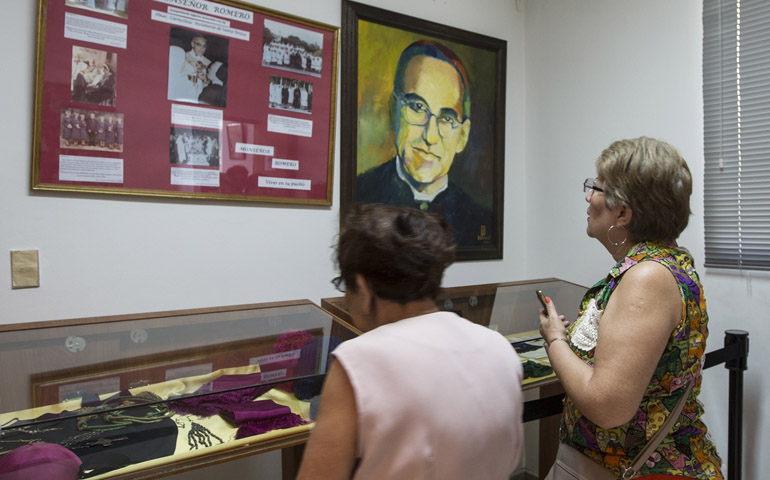 Women look at relics and other items of Salvadoran Archbishop Oscar Romero on March 22 at a museum dedicated to the late archbishop at Divine Providence Hospital in San Salvador. (CNS/Octavio Duran) 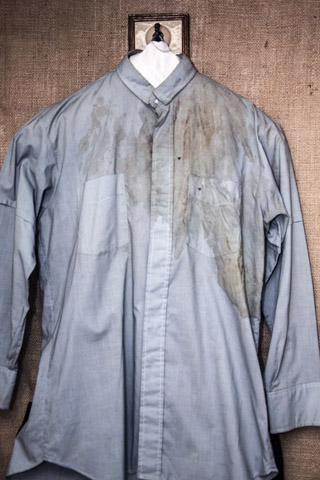