• Q & A with Sr. Grace Duc Le on the 350th anniversary of Lovers of the Holy Cross 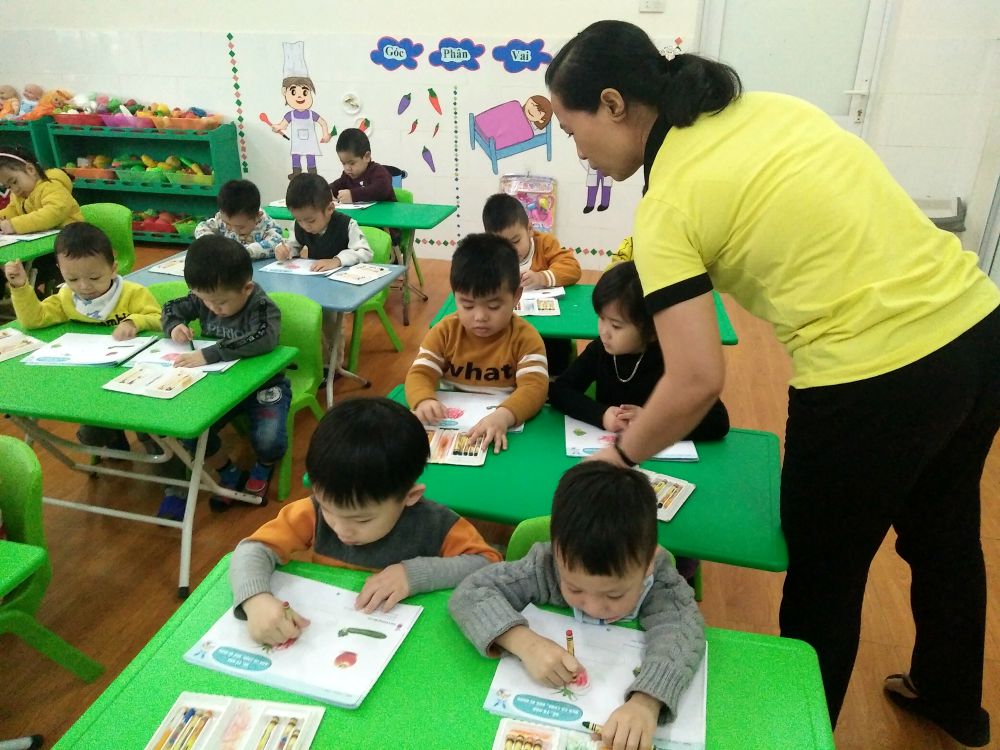 A sister from the Lovers of the Holy Cross watches children color coloring books in a class at Anh Duong Nursery School in Yen Bai City. (Joachim Pham)

Yen Bai City, Vietnam — Three-year-old Nguyen Thuy Linh, in a red overcoat, folds her arms across her chest says goodbye to her teacher with a smile: "Cháu chào cô ạ!"

Then Linh runs to her mother, says hello and hugs her.

Her mother, Mary Tran Thi Van Quynh, replies with a tight hug and sweet kiss and smile. Both get on their motorbike and leave Anh Duong Nursery School, heading for home.

"We feel happy and safe to send our daughter to study here," Quynh, who takes her daughter to school at 7 a.m. and picks her up at 5 p.m., told Global Sisters Report as she waited for Linh.

The 30-year-old Catholic mother of two said she appreciates the good quality of education provided by Lovers of the Holy Cross sisters, who run the school based in Yen Bai City, 180 kilometers (110 miles) northwest of Vietnam's capital of Hanoi.

Quynh, who works for a local environment and energy company, said she is also pleased with the education of her 6-year-old son, who graduated from the nursery school last year and is now a first-grader at a local public elementary school. 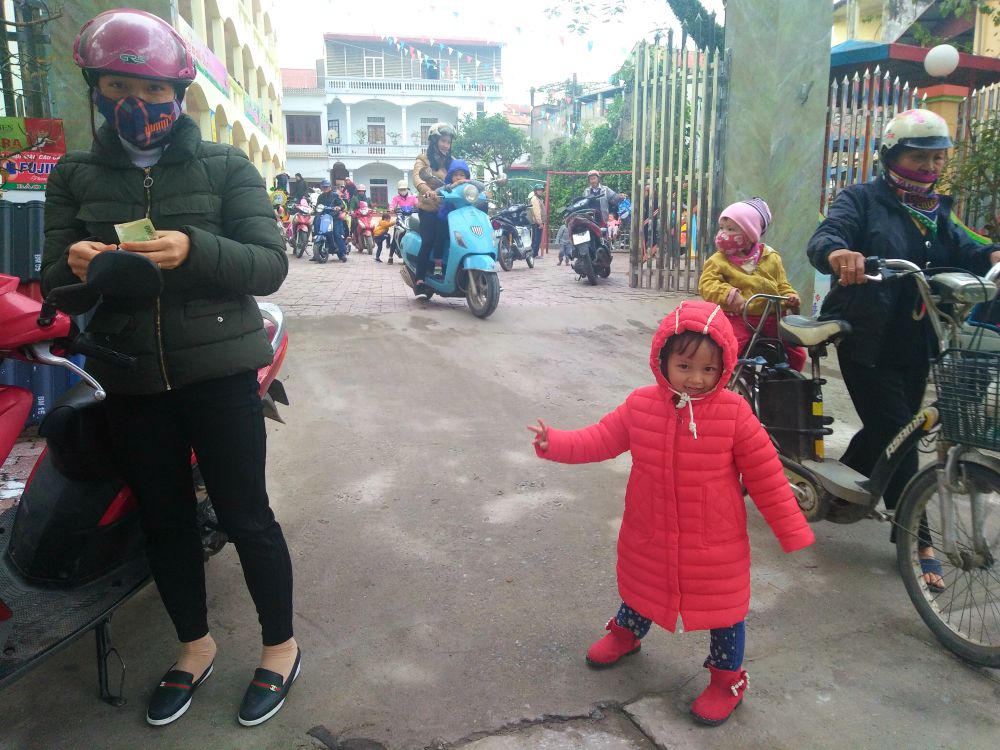 "The nuns taught him good habits, such as showing respect to family members and older people and never using foul language," she said.

Quynh said the nuns treat the children with respect and, unlike other schools in the area, do not beat them and serve them low-quality food. In August, workers from two day care centers in Hanoi and An Giang Province reportedly stuffed food into the mouth of babies then shouted at and hit them when they would not eat.

Sr. Anna Do Thi On, who is in charge of the convent and teaches 2-year-olds at the school, said the nursery school is the only Catholic one approved by the local government in Hung Hoa Diocese, which covers nine northwestern mountainous provinces. On said the Lovers of the Holy Cross also run some small day care centers in provinces that are not officially recognized as private schools.

The nun said all sisters who work at the school are well qualified for their jobs.

"It is important for us to provide tender care, good education, good behaviors and moral values to children like our children," On said. "Children need looking after well so that they can have good habits to respect and love other people and the environment and manage their lives in the future."

She said some older sisters also help care for children, feed them, comfort those who cry and treat them like their family members.

"It is really very tiring to look after children, but we feel happy to teach them Jesus' love," On said. 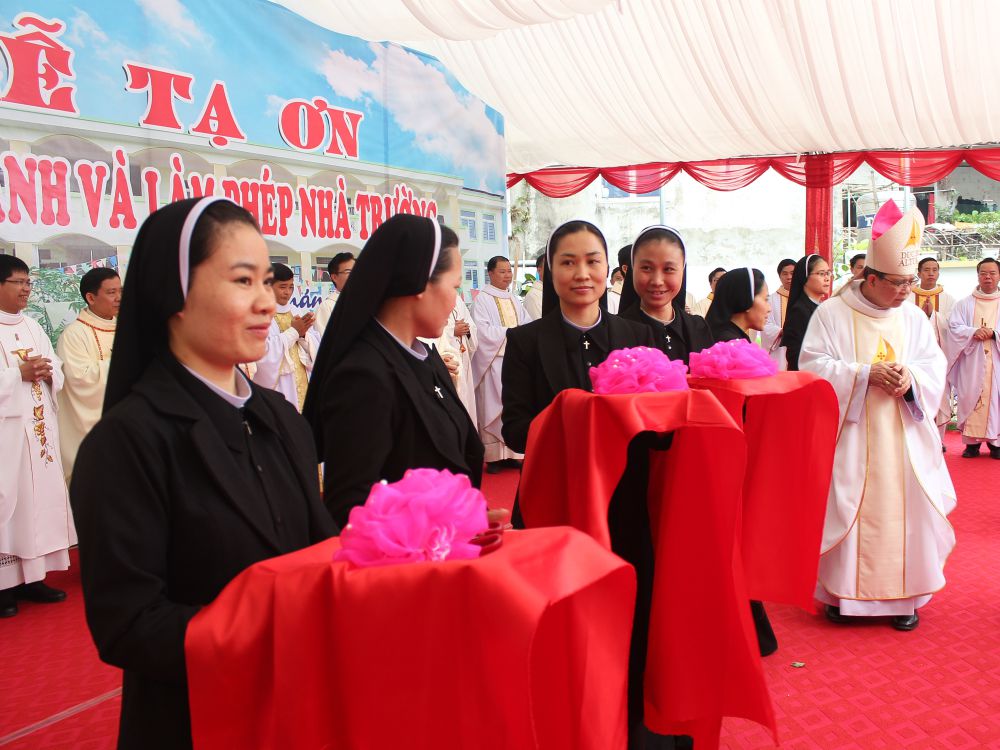 On Jan. 5, the nuns opened a new building with 12 classrooms between 40 and 60 square meters (430 and 646 square feet) each that are equipped with TV sets, fans and air conditioners.

Bishop John Mary Vu Tat of Hung Hoa presided at the dedication of the new building, joined by 32 priests and attended by some 100 Lovers of the Holy Cross and 1,000 Catholics, followers of other faiths and representatives from government bodies.

Tat encouraged the nuns to make their school a place of Christian love and to offer humane education to all students, regardless of their background.

On said the new school replaces two old buildings, which were in bad condition and cramped. In the past, many parents complained about deteriorating classrooms.

She said the new facility also aims to accommodate the increasing number of students who need a proper place for their studies and games.

"Many parents told us that next year they would move their children from other schools to our school because of our good facilities," On said, adding that next year, the school plans to enroll 70 more children, bringing the total to 350 students.

Sr. Mary Tran Thi Van, the school's principal, said the school now serves 280 children in nine classes. Ninety percent of them are from families of other faiths and government officials. 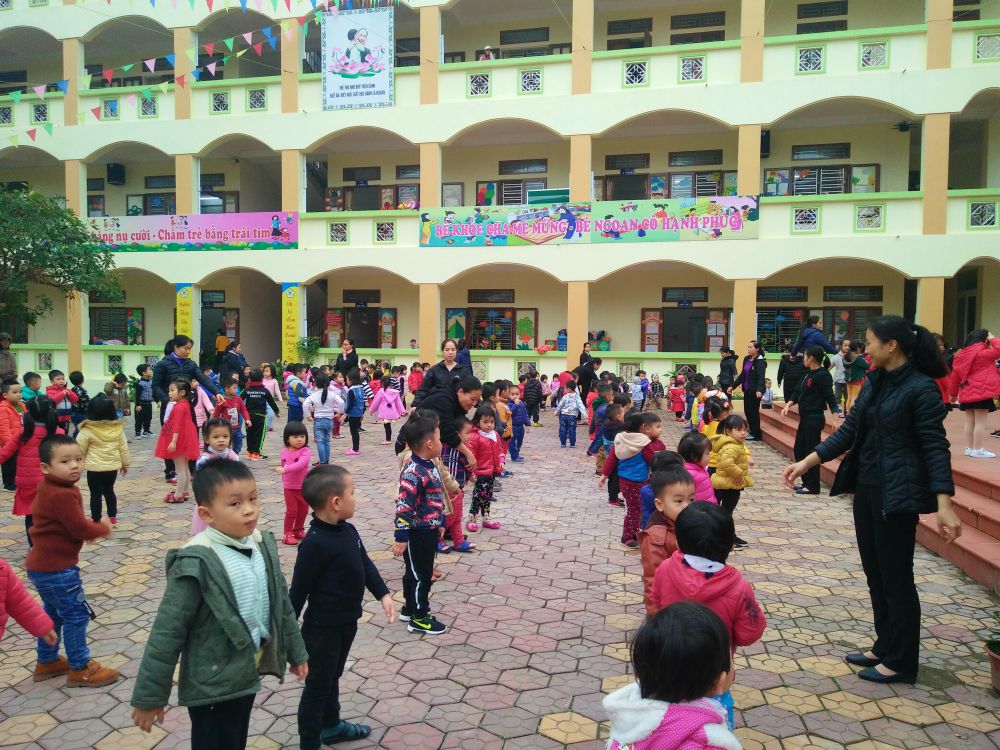 Van said the government has banned the nuns from teaching Catholicism to children and are required to hang pictures of the late President Ho Chi Minh, the founder of the country's communist government, in classrooms.

However, she said, the nuns also hang crosses.

The Catholic Church in Vietnam is only allowed to run nursery schools.

Van said providing preschool education for local children is a real way for the nuns to approach non-Catholic people.

She said the nuns help many Catholic parents who have ignored practicing their faith for years or had even abandoned Catholicism to return to the church.

The Lovers of the Holy Cross sisters began teaching in 1996, when they opened two classrooms with 30 children ages 1 to 3 at their convent to make a living and provide education to local children who could not enter public day care centers because of overcrowding.

She said the convent had to employ teachers who were not nuns to work in the classrooms because the nuns had no teaching qualifications. Then they sent young nuns to college to study education and built more classrooms for the new teachers.

The well-organized classes gradually attracted more than 100 children, and local education officials officially allowed the nuns to establish the school 10 years later, in 2006. 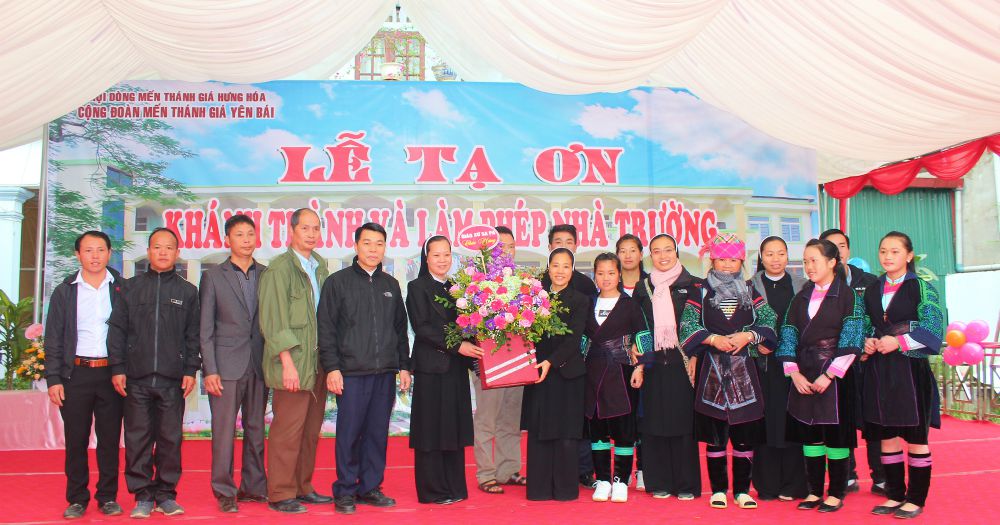 Hmong ethnic Catholics from Sapa Parish give congratulatory flowers and gifts to Yen Bai Lovers of the Holy Cross on Jan. 5, the day their new school building opened. (Joachim Pham)

Dao Van Nguyen, a Buddhist day laborer, said he sent his three children to the nuns' school "because we trust the nuns to teach our children to be good people." His friends introduced him to the school.

Nguyen, 40, said local people want their children to be given a good education, which the Catholic nuns provide.

Quynh said she is impressed with the school's new building and facilities.

"We will continue sending our daughter to the nuns until she is 6 years old, when she enters the elementary school," Quynh said.