The scene in early February — 125 or so people gathered somberly on a sidewalk praying and singing — might seem, in most places, a bit odd. But in Erie it was a familiar symbol of contradiction: a reminder that another person had been murdered in this gritty city on the country's northern edge and that the nuns were there to insist that violence would not ultimately prevail.

Darrin Germany Jr., 28, was shot to death Dec. 31 near the intersection of Prospect Avenue and June Street, the last of 13 homicides in Erie in 2016.

A few months later, the crowds gathered for a Take Back The Site vigil, organized by three women religious orders in the city, the Benedictine Sisters of Erie, the Sisters of St. Joseph and the Sisters of Mercy. The February 2 ritual marked the 100th iteration of the 15-minute ceremony first held in October, 1999.

Some deep instincts were at work back then when some members of the Erie Benedictines decided to head out to the parking lot of a Dairy Queen to reclaim a site where a homicide had occurred.

A woman had been strangled in her car and then shot and left there.

"The intent was to reclaim the site for nonviolence," said Sr. Marlene Bertke, long involved in Benedictines for Peace, a ministry of the community, during a series of interviews with representatives of the three communities at Mount St. Benedict Monastery in Erie.

"We put together a little prayer service. We said it would last 15 minutes and no more. And it did." The service included a portion that made it clear that sisters were not making a judgment of what had happened. Part of the intent was to bring comfort, but a larger part "was to reclaim this place, to make this place of violence in our community nonviolent once again."

So they prayed, sprinkled some holy water around. "And then we looked at each other and went home."

The 15-minute service has varied little over the years, but it grew to include family members, neighbors, civic leaders, religious leaders of other denominations and women religious from other communities.

It has become an institution — recognizable locally by its initials, TBTS — born of regrettable circumstances but speaking unanticipated volumes in the direction of redemption, reconciliation and acknowledging human worth in situations that are often rife with condemnation and unrelenting pain.

The hope, said Bertke, reflecting on the long practice, is that "our prayerful presence will reclaim the site for nonviolence, will once again make it a holy place."

It is, in a sense, an expression of instincts deeply embedded in Catholic culture, a view of sacramental life central to the Catholic experience but taken well beyond the church walls. The late theologian Fr. Richard McBrien, in his masterwork, Catholicism, describes sacramentality as everything "in principle, capable of embodying and communicating the divine. There is no finite instrument that God cannot put to use. On the other hand," he writes, "we humans have nothing apart from finite instruments" with which to respond to God. And that communication, he further writes, is "not exclusively, nor individual and personal," but rather "corporate and communal."

In the case of the TBTS ceremonies, the communal aspect is boundless and broadly ecumenical.

As the homicides continued to occur and the sisters kept taking back the sites, they also began reaching out to the families and the wider community. They notified media ahead of the events, and they leafleted the neighborhoods, explaining what was about to occur.

It has become customary for sisters to attend the funerals, and they often visit with the families privately to console them. The vigils are always held after the funerals and after the sisters have made contact with the families, said Benedictine Sr. Susan Doubet. Sometimes months intervene between the time of the death and the public gatherings, especially during winters that can bring severe weather to the city. In rare instances, because of complicating circumstances, the families have asked that the vigils not be held.

More often, they are anticipated by family members. It is not unusual, say the sisters, that people in the neighborhoods where a homicide occurs are already familiar with the vigils or have attended one.

The services, said the Rev. Charles Mock, "are a reminder to some of the preciousness of all life." They are a reminder "that we need in different ways every day, and I say that based on the cheapening of life going on every day across the world."

The Take Back The Site vigils, said the pastor of Community Missionary Baptist Church in Erie, provide a means for "solidifying families and reminding individuals, no matter who they are and where they live, that people share their pain and their sorrow. They are not alone."

Sonya Arrington, an Erie city councilwoman and activist against violence and on behalf of the city's youth, has first-hand experience. Her son, Steven Arrington II, was 19 when he was shot multiple times on Jan. 5, 2010, outside a convenience store.

"The vigil for my son was a very hard day, but it was so comforting to know that complete strangers at the time took the time to come and sit in my house with me and my husband and talk to us about our son and learn and little bit about him," she told the Erie Times-News, which has given considerable coverage to the services over the years.

In a recent telephone interview with Global Sisters Report, Arrington, who grew up in a housing project in Erie's inner city, said she and her husband, Steve, went to counseling following the murder of their son. "If we had not gone, we wouldn't be doing anything."

In the years since that tragedy, she's done a lot. Arrington founded Mothers Against Teen Violence a few months after her son's death and she also enrolled at Mercyhurst University, an Erie institution founded by the Sisters of Mercy. She has four more courses to complete in September and will graduate with a degree in business.

At the February gathering for Darrin Germany, another Erie public official, County Councilman Andre Horton, spoke movingly of the tragedy. He recalled a Christmas season gathering on Dec. 19 when he and his wife, Angela, "had all of our children at the home for the first time under one roof in eight years," including Darrin, according to a report in the Erie Times-News.

Days later his stepson was dead. "So everybody else goes back to their life as well they should, but what do we go back to? We're left with picking up the pieces, putting one foot in front of the other, trying not to be resentful. He'll be missed but he'll never be forgotten," he told the Times-News.

Four homicides, followed by four more vigils, have occurred in Erie this year, according to Doubet.

Mercy Sr. Rita Panciera recalls that one of the murders and vigils in the past year particularly affected her because it "took place just where I had been walking regularly." It was a spot by Lake Erie where a father of several children who lived in the neighborhood lost his life.

Another sister recalled the case of a young child, a little girl, emaciated, who had been tossed into a trash can. As service was about to start, a group of men roared up on motorcycles. They stayed and some spoke movingly of their work on behalf of abused children.

Among the boundaries that came down as the prayer vigils went on were those between religious orders. There was a time when shared ministry among religious orders would have been unheard of. That has changed, of course, and the Sisters of St. Joseph and the Sisters of Mercy joined the vigils shortly after they began and now alternately sponsor them.

Mercy Sr. Natalie Rossi recalled a vigil held outside a bar and grill on West Eighth Street. After sprinkling holy water around the ground outside, a patron of the bar came out and asked if she could come in and bless the bar. She did, not knowing whether she would be welcomed or challenged or maybe asked to leave. It was a strange place for a nun and a bottle of holy water. She was welcomed and, at one point, a patron said, "We could all use a blessing, Sister." So, she wrote in a reflection on the event, "a blessing they received."

A few years ago, recalled another sister, a mother attended a vigil with her young son. She was in tears. Asked what had brought her to the gathering, she introduced her son and said, "I've been trying to teach him the danger of violence and trying to teach him to choose non-violence. I talk to him every night about it and every night we pray about it, but nothing will affect him like this."

What effect the vigils have on the future, of course, is an unknown. But over the 18 years of holding the ceremonies, people in the community have come to expect the sisters to show up. The crowds now range between 50 and more than 100. They've even been approached by family members of murder victims who have been memorialized asking if an anniversary vigil can be held.

Benedictine Sr. Anne McCarthy, who lives with several other sisters in an inner city neighborhood, recalled explaining an upcoming vigil to a woman who had just come from Congo. "And she was explaining it to others," a group of Syrians who had been here for only about a month who also wanted an explanation. "They have smart phones, so I'm typing into their phones and it is translating into Arabic, and they were devout Muslims, and they said they would come to the vigil. Explaining that we would gather to pray when someone was murdered really spoke to them. And I thought of all they must have experienced, and here we are in the same block, and here we are gathered for prayer together. And it seems that these vigils have pulled that together in prayer that is powerful, and hopefully healing."

The simple elements of ancient ritual — prayer, song, holy water — may be unlikely weapons against urban poverty and its kin, deadly violence, but it is one step in what Arrington calls "making a positive out of a negative." The sisters who organize the vigils may not know all of the victims and their families, said Sr. Anne Wambach, prioress of the Benedictine community. "But we are getting to know one another as we continue to gather. And the gatherings have resulted in an awareness of the problem city wide.

"The whole city is now concerned about violence," she said, "and I think they look to this group to help move forward with efforts of nonviolence." 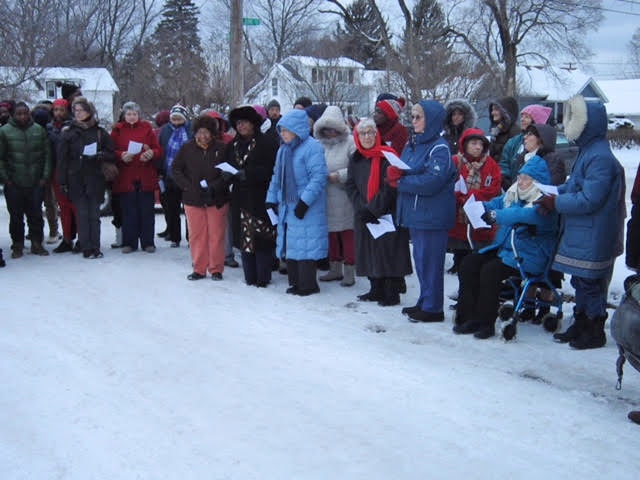 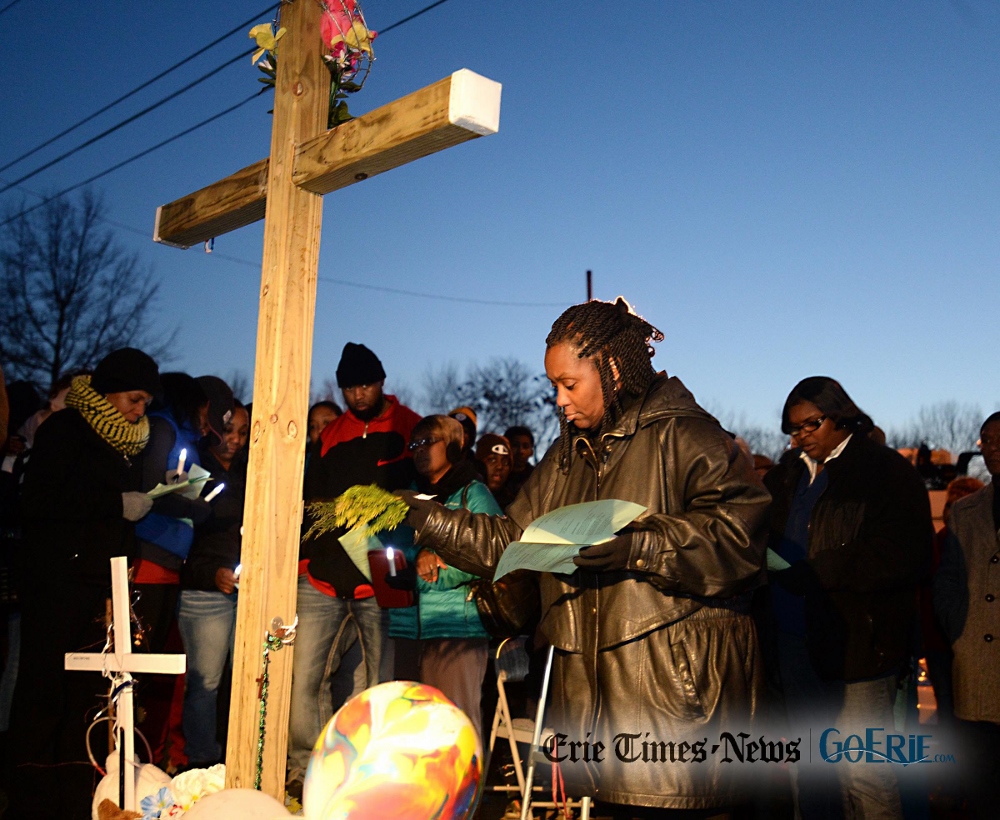 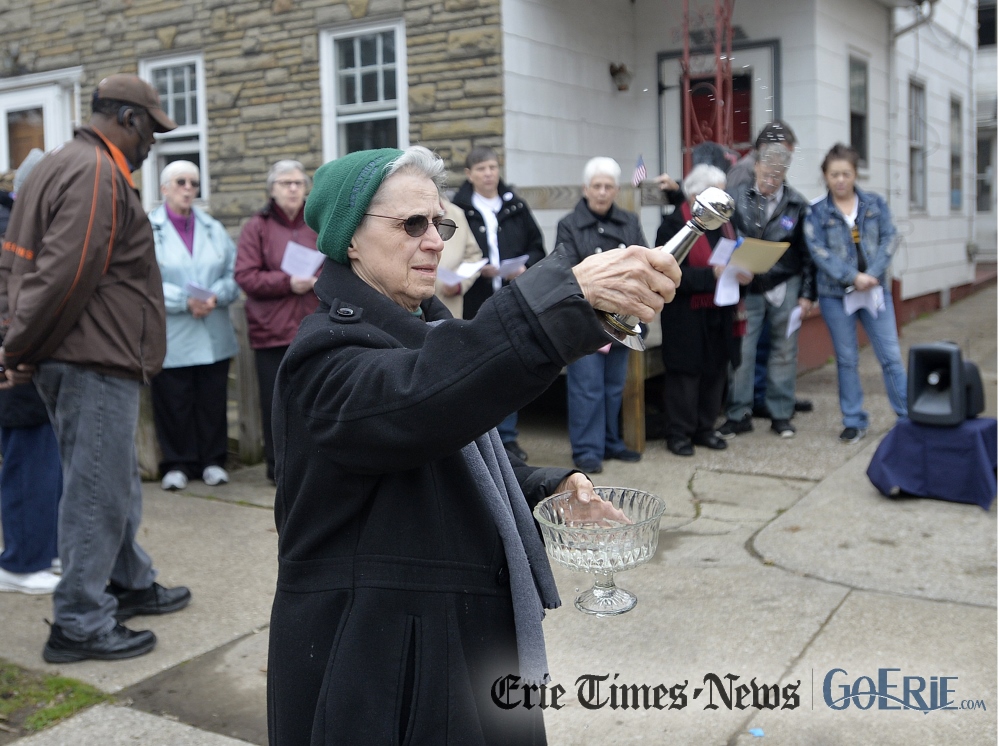 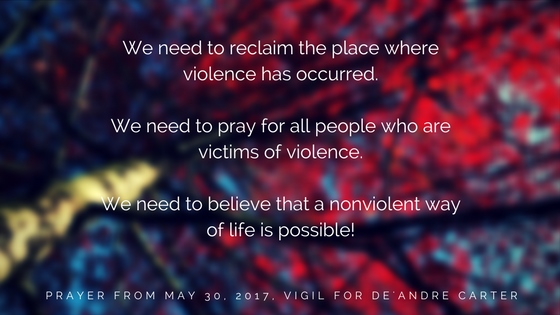 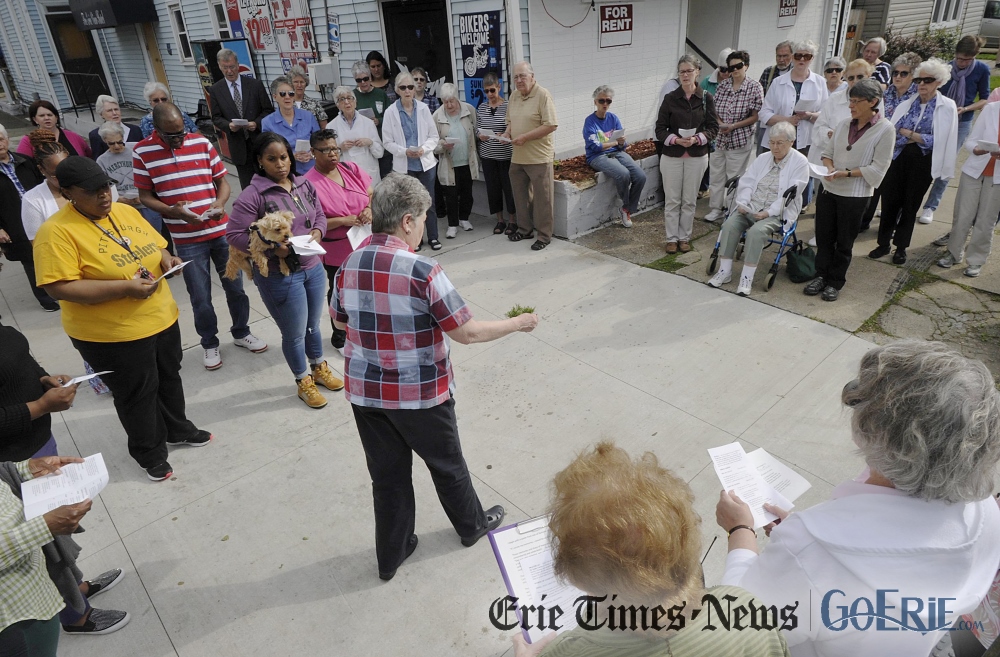 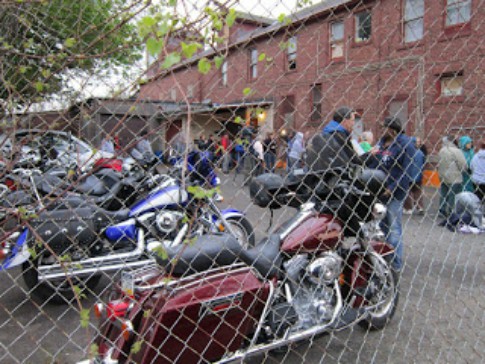 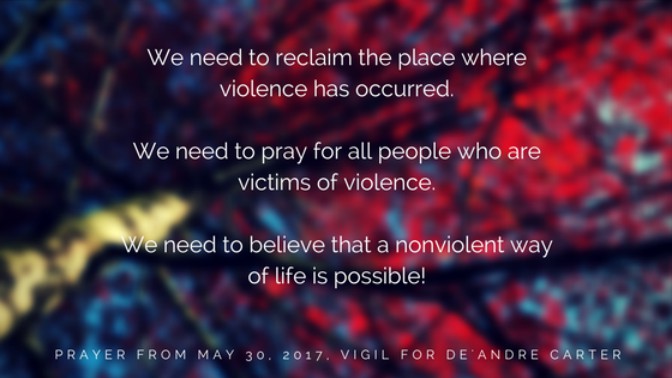