Sumitra Das' eyes glitter as she shares her excitement over her son Pinaki finding a job — cutting vegetables at his father's catering firm. Even that simple act is a great achievement for her only son, she says. Pinaki is 22 and autistic.

His getting a job was possible only because of the help he received from Jeevoday (dawn of life), the Hindu woman told Global Sisters Report.

The Assisi Sisters of Mary Immaculate manage the school, which is registered with the government as Jeevoday Education Society, Special School for the Mentally Handicapped, in the central Indian town of Nagpur.

Das, 52, says her son joined the Catholic institution eight years ago as the last hope for them. Earlier, he was attending two standard schools in the city upon medical advice. Although those schools had separate wings for people with different needs, Pinaki could not learn much, Das recalls.

"There were frequent complaints from the teachers that he was restless. They were more interested in academics. There was no socialization, only books and books," says Das, who accompanies him to Jeevoday and sits through his class.

Jeevoday helps its students become self-sufficient to a certain extent.

The three-story school is located inside the premises of the Nagpur archbishop's residence. It now has 300 students, ages 3 to 60, who are looked after by nine nuns and 36 lay people during the 5-hour school day. The school also employs professional physiotherapists to help the students and has vocational training rooms where they are taught to how to do data entry or to make candles and other things.

School principal Sr. Josna Mary Chemplayil says the institution has helped more than 1,000 people since it was started October 2, 1989, the 120th birth anniversary of Mahatma Gandhi, India's father of the nation. They began with three children, says the nun, who is one of the two pioneers of the school.

"Most of my time is spent counseling the parents. Some children are unmanageable at home. The parents come here and cry their heart out," Chemplayil told GSR. "The parents say a sickness will go after a few days or months. But the disability is a lifelong challenge."

Her congregation is based in the southern Indian state of Kerala and came to Nagpur on the invitation of Archbishop Leobard D'Souza, the local prelate at the time.

Chemplayil, who was then a 22-year-old newly professed nun, recalls her provincial asking her group for volunteers for the new mission. "Two of us raised our hands, not knowing what it would involve. I have never regretted my decision."

She and her companion, Sr. Jacinth Mary Theruvankunnel soon realized that the mission did involve struggle.

Their first challenge was to get trained for the special mission. So, they went to a training school in Thiruvananthapuram, capital of Kerala. "When the school asked the students to do a survey of a place as part of the course, we chose Nagpur," Chemplayil recalls.

Their house visits in Nagpur as part of the survey convinced them the city urgently needed a special school for disabled children.

Theruvankunnel recalls that they had found many mentally challenged children. "Their parents refused to send them to school as they did not want to make their disability known. They relented when we convinced them [our] school would teach them life skills," she says.

The archbishop offered the two nuns houses vacated by his workers inside his residential complex.

"The bishop's workers revolted against us. However, they calmed down after they saw our work with the mentally challenged," recalls Theruvankunnel, who now teaches in a school in Nagpur.

As the number of students increased, the prelate offered them a dumping area in the same complex to expand the school and build a convent.

The nuns soon began clearing the place only to discover a graveyard underneath.

When they told the prelate about it, he reminded them about their reputation of turning dumping grounds into dwelling places that earned them the name, "Green Garden Sisters." The congregation had already built a hospital and a convent surrounded by gardens on two dumping grounds in Kerala.

"As you are known as 'Green Garden sisters,' it is up to you to transform this land," Theruvankunnel recalls the archbishop telling them.

Others were not so supportive.

"But we dug up the graves and removed skulls and bones. Many workers fled the scene. Those were the moments when we realized beyond doubt that God was with us," Theruvankunnel says with a twinkle in her eyes.

Even their superiors were worried that some harm would come to them. "But nothing happened," Theruvankunnel continues.

The nuns soon completed the construction of a school and convent, transforming the graveyard into a garden.

A team of experts

Chemplayil says they named the school Jeevoday since they were going to give a new life to the families of the mentally challenged.

That is what the nuns have done for the past 27 years with a group of psychologists, physiotherapists, arts and craft teachers and computer specialists. Some instructors are parents who were trained as special teachers.

Sr. Nancy Tirkey, who has been with the school for the last nine years, says eight of their students, from ages 3 to 40, require toilet assistance. Some cannot even fix their shirt buttons and will approach the staff, says the sister, who has arts and crafts training in addition to a diploma in special education.

The school teaches life skills, such as how to brush teeth, comb hair and change clothes, Tirkey explains.

Sr. Anima Ekka says skills training has to happen in the classroom because of lack of space. "Daily exercises are a must as their muscles are stiff," she explains as she cajoles a 5-year-old girl who refuses to leave her little chair to join in exercise class.

Tirkey says the vocational training has helped many find jobs and improve their social status.

Some 60 students older than 16 now work at the computers. "It took two years before we could bring them in front of the computer," Tirkey explains. The school first teaches them the alphabet, then the numerals.

"We teach them alphabets in different ways — just one letter a day. We use fruit, balls and other objects," she says, adding that letters and numbers are not taught in order of sequence. If a teacher asks for a certain letter, "They will be able to spot it out."

Tirkey says she improvises the system on the needs of each student. "Each one is different with different needs and requirement," she explains.

After training, the students become "amazing at the computers," she says. "They never make a mistake in the entry, nor do they get distracted if we visit them while they work. Their concentration is fixed on the work they do."

When the workload increases, teachers try to help with the computer entry, but they make mistakes, the nun says.

The school gets additional work from a milk collection firm.

Mohammed Javed, a computer instructor, says the students earn between 2,000 to 4,000 rupees (U.S. $30-60) a month depending on the amount of entries they have done. "They became very enthusiastic when they realized they were earning money," the 28-year-old Muslim instructor says.

Not all are able to make it to the computers. One who can't is the 19-year-old daughter of Uma Pathak, an instructor at the school. Pathak's 22-year-old son also attends.

"While the son has learned many skills, like eating, dressing, brushing the teeth, after coming to the school, the daughter has not. With a severe disability she is not even willing to wear the school uniform," Pathak says.

However, the girl is happy to be in the school with other children because she experiences peace, her mother says.

Sr. Crescencia Soren, who has taught in the school for 16 years, finds the students "pure and innocent." The nun, who has a master's degree in social work, says they visit children's homes twice a year to ease the parents' tension and monitor the children's progress.

"A child will grow much if there is cooperation from the parents. Some parents feel overburdened and unhappy as children destroy things in the house. [The children] are not aware of what they do. Even when we chastise them they smile," Soren says.

The children have become part of the Jeevoday staff's life.

"Without these children I have no life," says Nageswari Rao, a crafts instructor, who used to teach in a standard school. "But I find more joy here," the Hindu woman says.

Vishal Nagdeve, a psychologist and a Hindu, says he get less salary than what he used to get when he worked in other places. "I find here fulfillment and joy, and a sense of achievement."

The Nagpur provincial of the Assisi sisters, Sr. Tessily Maria Unnudamparayil, has worked in the school for 22 years and shares this view. "I found something new in the children every day. We need only a loving heart to take care of the children," says the nun, who has an intellectually challenged sister at home.

Chemplayil says they now understand the pain of parents who have to be with their children day and night. She was touched when a mother told her that she had not had a vacation after her son was born.

So, in May 2015, the school organized a one-month summer camp and students stayed in the hostel. "This gave the parents time to relax," she says.

The school also focuses on developing students' personalities and abilities to socialize. As a result, some students have taken up jobs. But even so, Chemplayil says, "Very often the employees fail to understand them and recognize their talents, making the children sad."

The nun says the mission involves personal sacrifices. She has not watched television or films for years. "I am with them always. This is my gift for them," she adds.

Such dedication from the nuns has encouraged Das to view her son in a different light. "This is my son. And I will walk with him at every step," she says, holding Pinaki close to her heart. 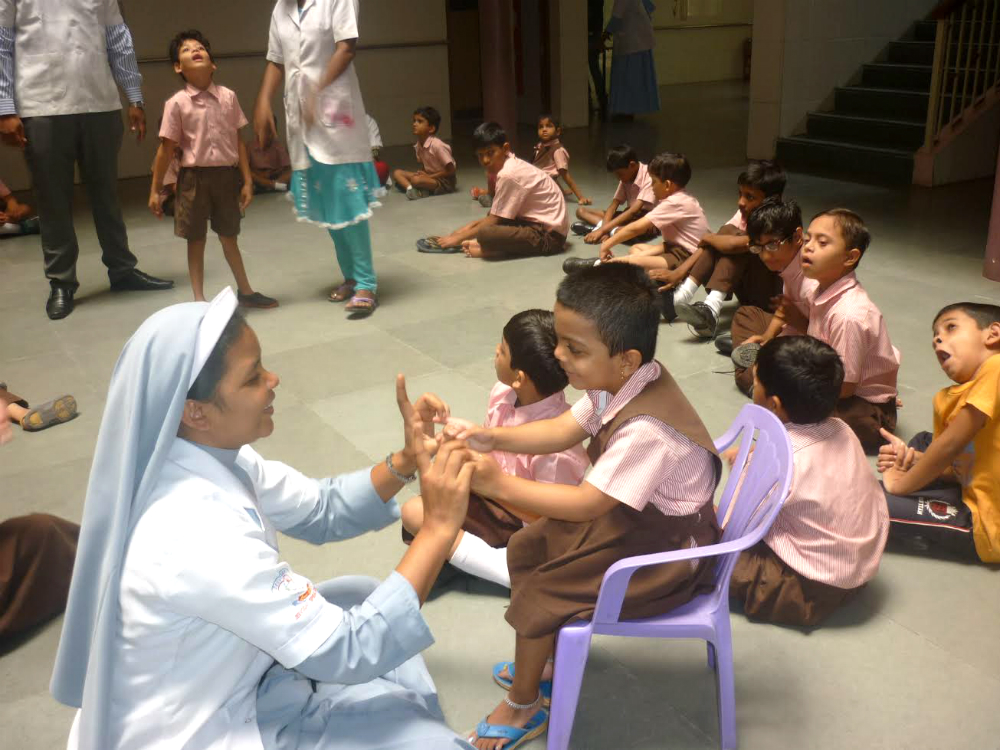 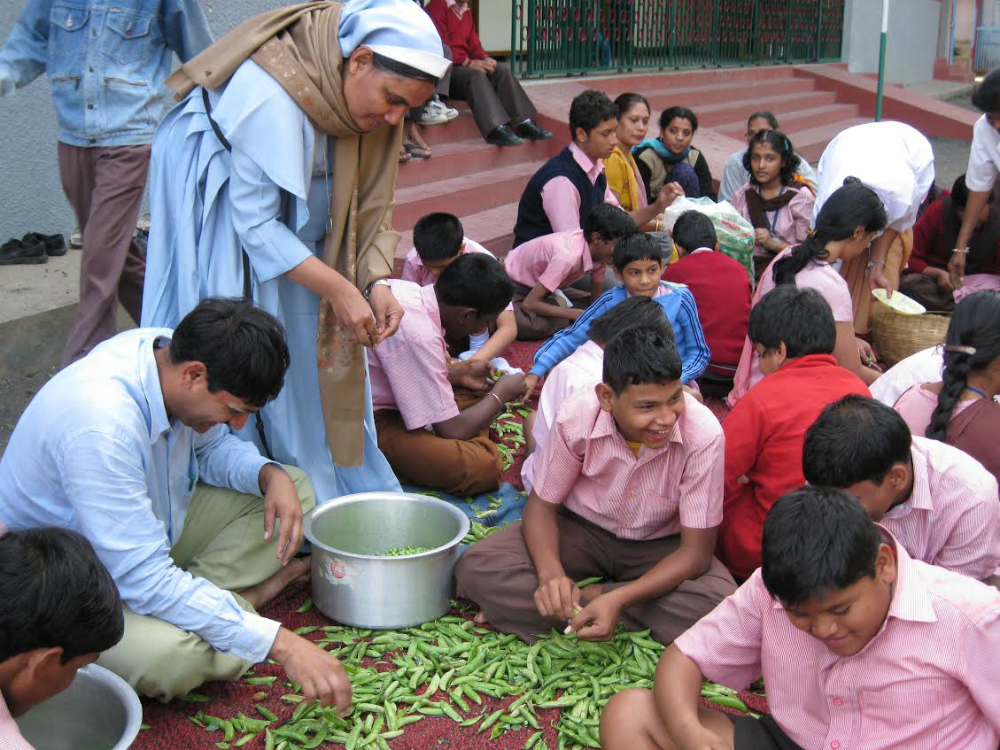 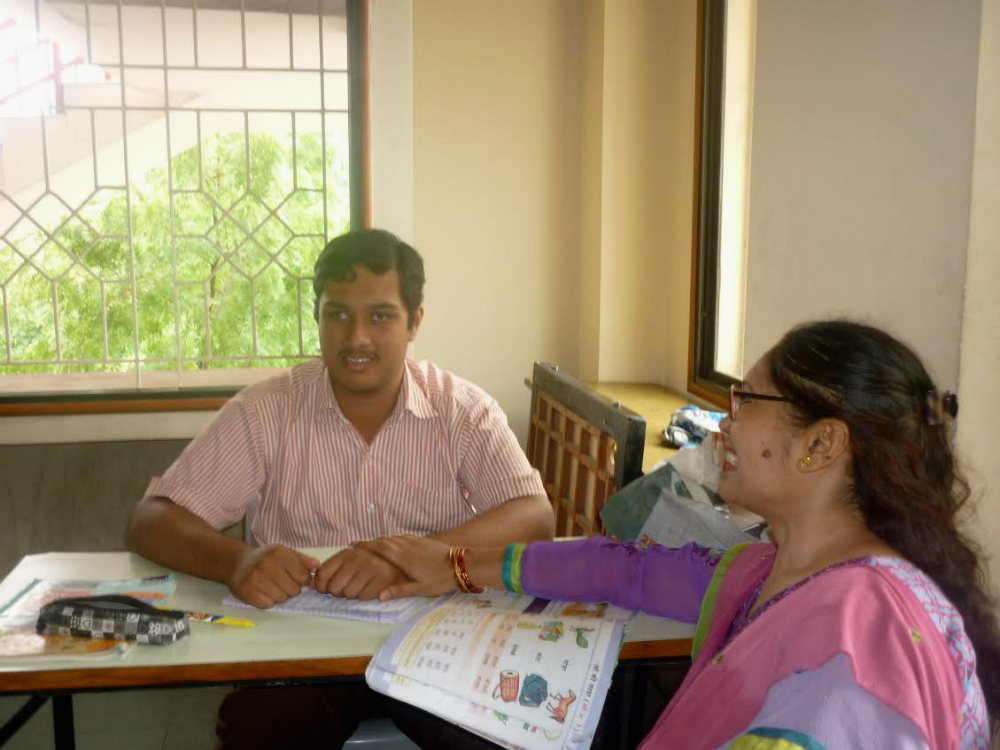 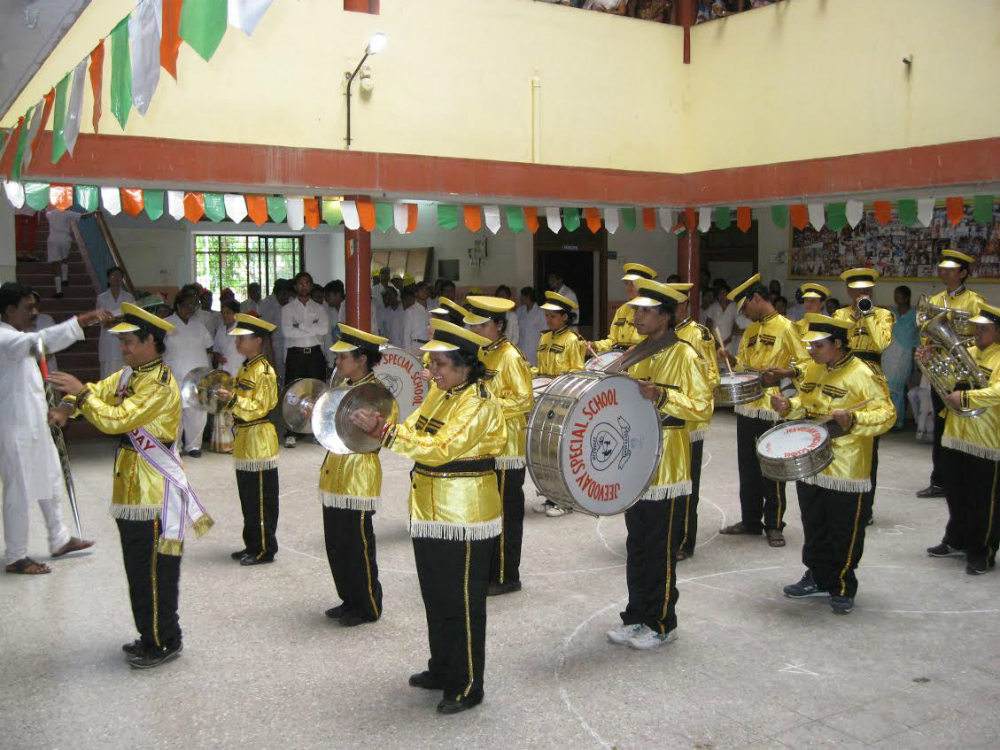 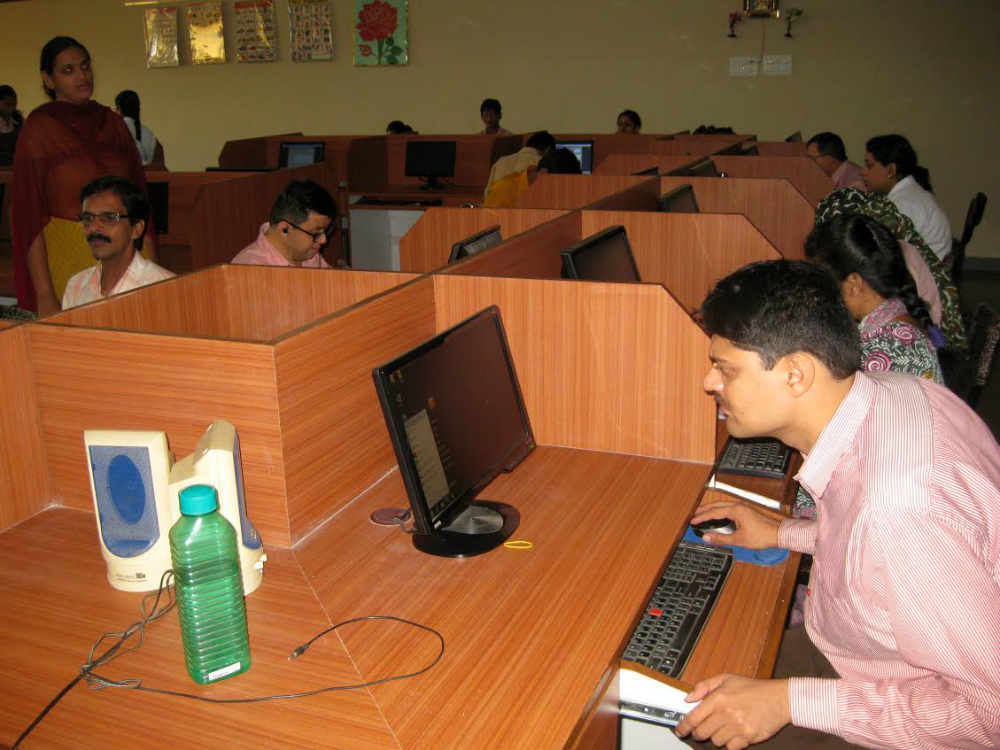 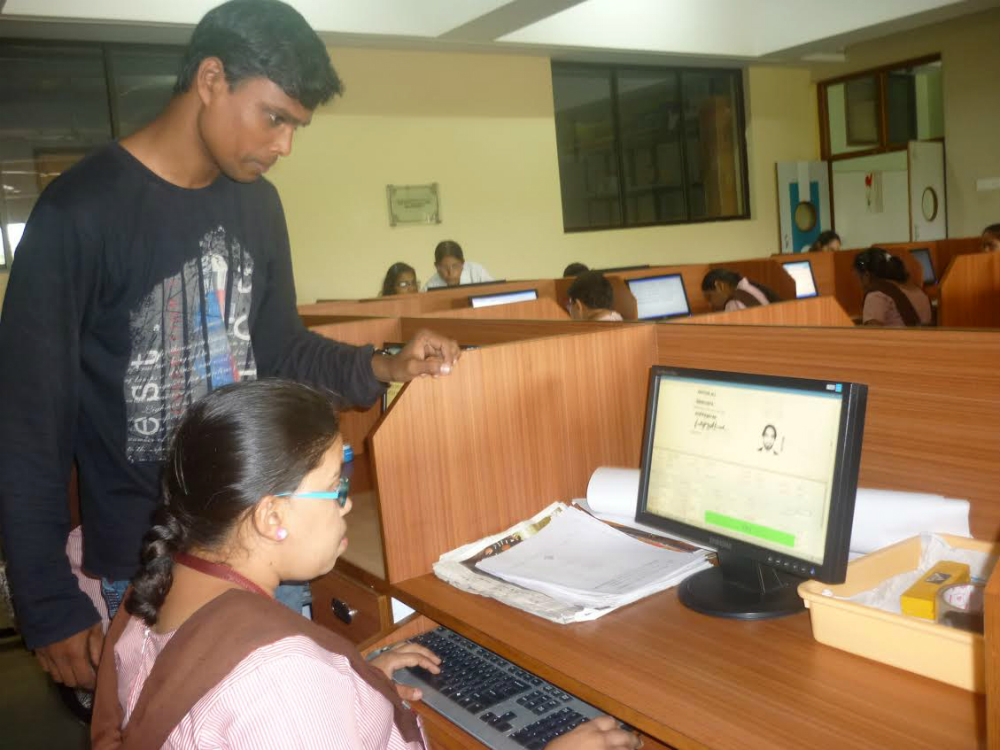 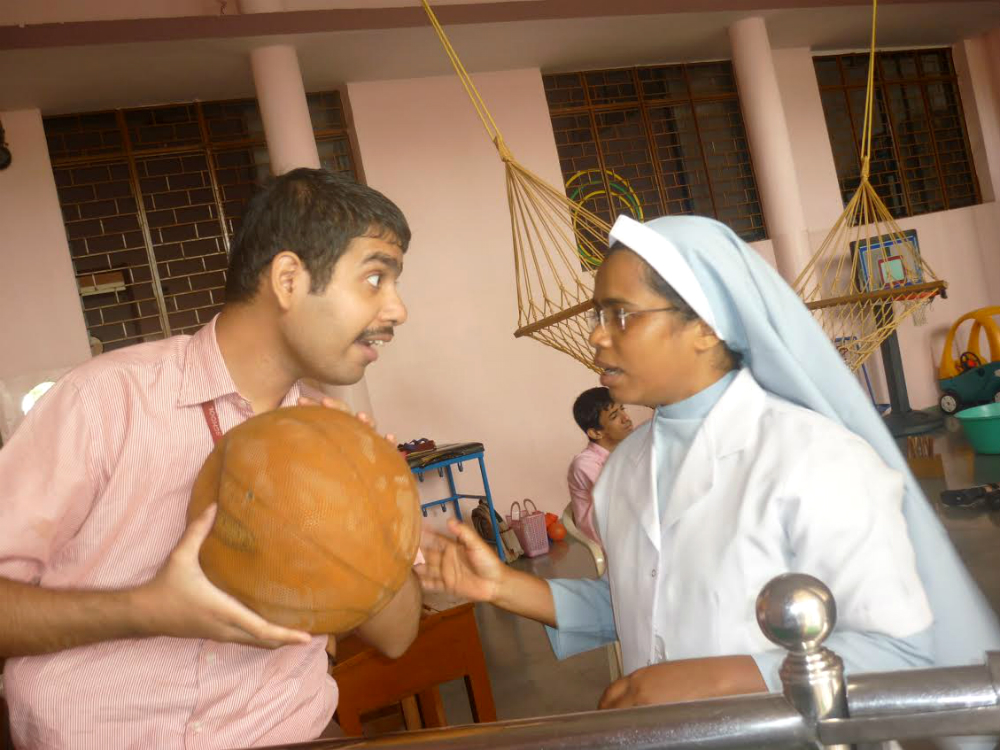 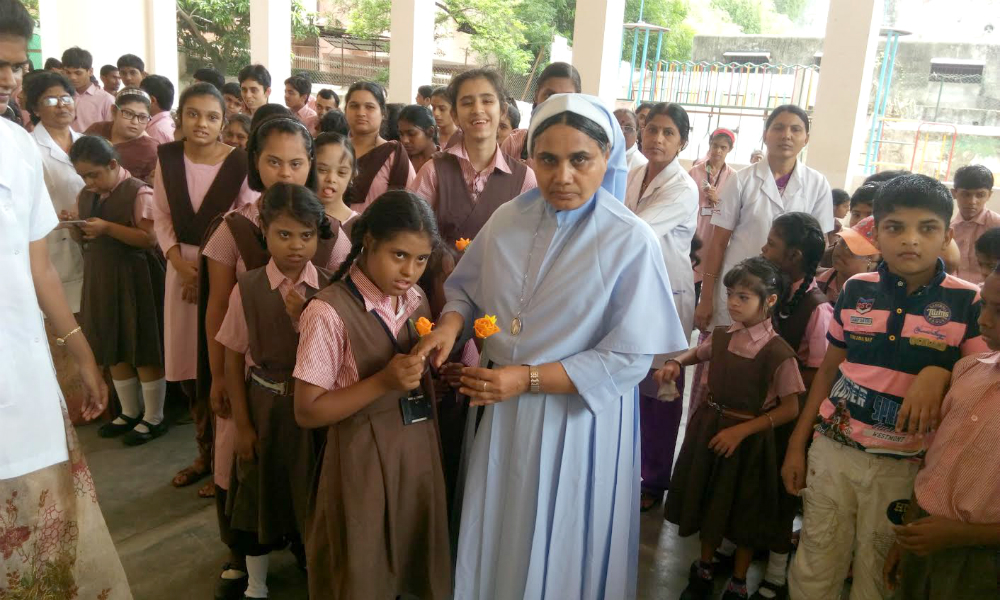