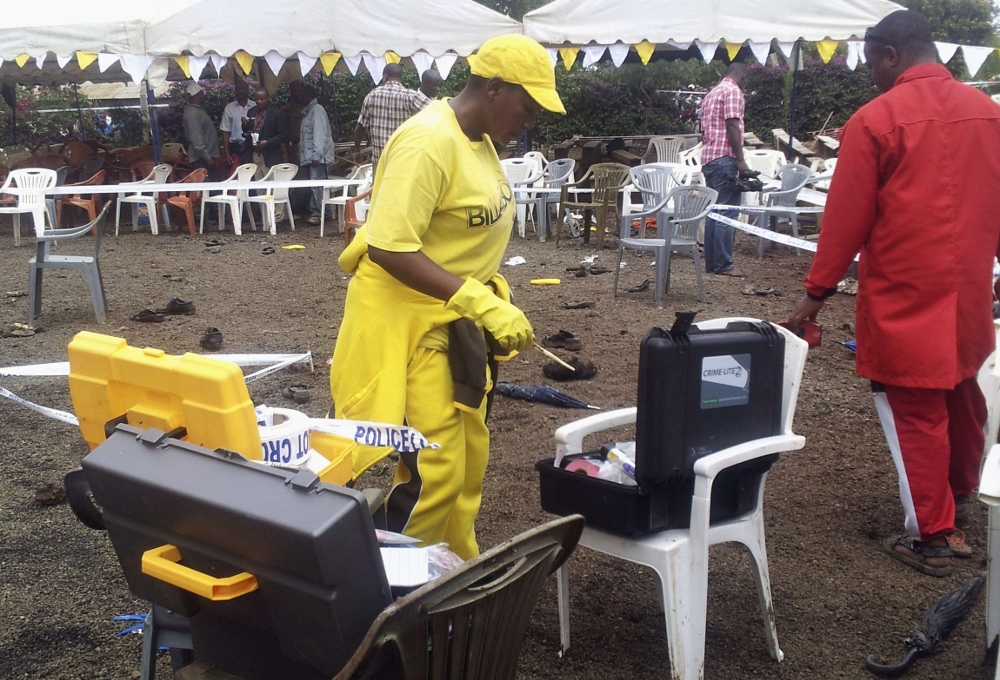 Bomb experts from the military secure the scene of an explosion at St. Joseph Mfanyakazi Catholic Church in Arusha, Tanzania, May 5, 2013. The bombing left at least two people dead and dozens injured while a Vatican nuncio escaped unharmed. (CNS photo / Reuters)

Zanzibar, Tanzania — It was the poverty and sense of isolation that drew the Evangelizing Sisters of Mary to Zanzibar in the first place. But when the violence started, even destroying their own church, it was their commitment to peace that made them stay.

“Many people tried to tell us to come back [to mainland Tanzania]. But we said if we run away, we’re running away from the cross of Christ. How can we leave people here?” said Sr. Yusta Tesha.

Zanzibar is an island off the coast of Tanzania known for pristine beaches at tourist resorts and busy commercial ports. Mainland Tanzania is split evenly between Muslims, Christians and traditional beliefs, while Zanzibar is more than 95 percent Muslim.

Arab traders that plied the coast of Africa throughout history made the island a central hub, and Islam became the dominant religion from their influence. There is a small community of approximately 11,000 Christians on the island of Zanzibar, out of a population of more than 1 million people.

Though relations are generally tolerant, waves of Muslim extremism sometimes sweep through the island, fueled by radical groups who get support and inspiration from international terror groups like Al Qaeda, Al Shabaab and Boko Haram. The spring of 2012, when an angry extremist mob burned the Church of St. Joseph in Stone Town, Zanzibar, was one of these times of heightened tension.

But the sisters remembered the order’s original call, its charism to go to the remotest areas.

“The apostolate in Zanzibar isn’t converting them to Christianity, it’s helping them live as brothers and sisters,” explained Tesha, who has worked in Zanzibar for five years. “What we’re doing in Zanzibar is interreligious dialogue in action. We interact with the Muslims, we try to find the means of helping them, and to live in peaceful coexistence.”

Tesha and the other two sisters in her community spend most of their time doing pastoral work in the community. “We try to teach children about human rights, that they have rights as children, especially girls,” she said. The sisters hold seminars in the communities and local schools, talking about the importance of education for girls as well as the risks of human trafficking. Because Zanzibar is an island, it is a well-used stopover for traffickers bringing victims from mainland Africa to other parts of the world.

Almost all of the seminar participants are Muslim, because that is the makeup of the community. Tesha said it took years to gain the trust of local leaders. “If you want to talk to women, men will come too,” she said. “They thought we wanted to convert them to our religion. But we’re not about changing their religion, we’re about helping women to live a better life in this society.”

Tesha noted that in the conservative society of Zanzibar, women were sometimes confined to their homes. 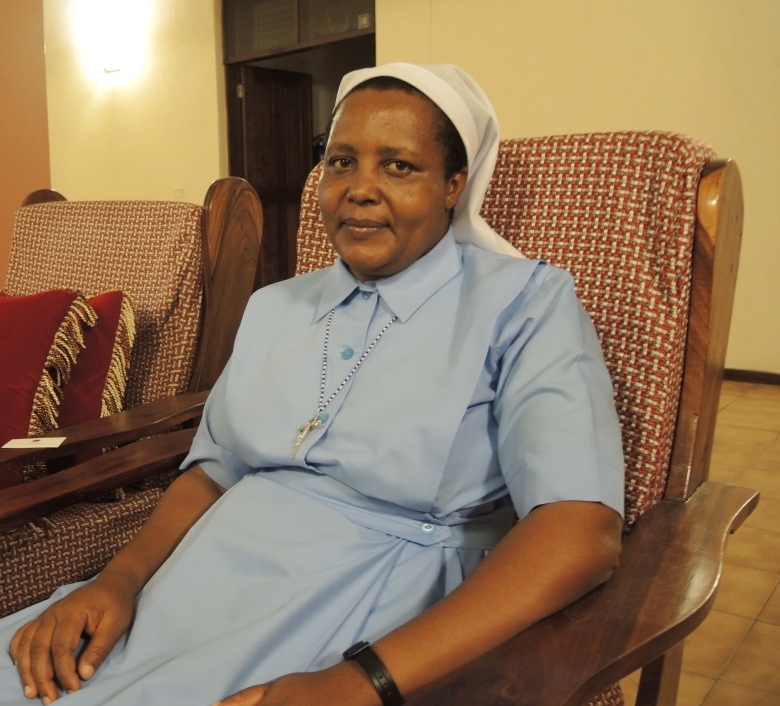 “It was challenging at first, but as time went on and they saw that we’re not talking about religion, the men left us and let us talk,” she said. She also noticed that the local Muslim community seemed to trust sisters more than priests. “For us religious women, they really appreciate what we do, they really see we’re there to help,” she said. “The women are coming out slowly but surely.”

Zanzibar, which became independent in 1963, was incorporated into Tanzania in 1964 following the mainland's independence in 1961. The name of the country is a combination of the words Tanganyika, the indigenous name of mainland Tanzania, and Zanzibar. Zanzibar has its own president and parliament. But tensions between the mainland and the island have existed since unification, with Zanzibarians claiming they do not get a fair share of government resources and support.

The island is a popular destination for tourists who enjoy white sandy beaches ringed with palm trees that rival any Caribbean island. But tourism’s economic boost has not trickled down to the majority of the residents, who struggle to make ends meet as subsistence farmers or fishermen. The widespread poverty also makes it a fertile ground for extremists, who appeal to disenchanted, unemployed youth.

The radical Muslim group Uamsho, “The Awakening” in Swahili, champions secession from mainland Tanganyika and imposing Sharia law in Zanzibar. In 2011 and 2012, as Tanzania was in the middle of a constitutional review (the country still has not approved a new constitution), protests fueled by Uamsho and radical politicians agitated for a referendum on Zanzibar’s secession.

The political situation riled up young people, who engaged in violent attacks against Christians and even a moderate Muslim cleric, Mufti secretary Sheikh Fadhil Suleiman Soraga.

It was the middle of the night on May 18, 2012, when 100 angry young people surrounded the Church of St. Joseph in Stone Town, Zanzibar, armed with stones and petrol. As three terrified Evangelizing Sisters of Mary huddled behind a locked door in the house in the same compound, the rioters smashed through the door of the recently constructed church. They smashed windows and doors, doused everything with gasoline and set it ablaze. Someone pounded on the door of the house where the sisters lived, admonishing them to come out, but they stayed locked inside.

For three months after the arson attack, the sisters tried to avoid leaving their house as the situation cooled. A guard came to patrol at night.

Violence spread to the mainland that October, when a Christian boy allegedly urinated on a Quran. Rioters in Dar es Salaam vandalized and burned five churches. Police eventually arrested more than 100 people.

On Christmas Day in 2012, extremists shot Fr. Ambrose Mkenda, who survived. The violence against Catholics continued into February 2013, when extremists fatally shot Fr. Evarist Mushi as he was about to enter a church to say Mass.

Attacks continued. On Aug. 7, men on a moped threw a jerry can full of acid at two British tourists and volunteers from Britain walking to dinner in Stone Town. A few weeks later, extremists threw acid in the face of Fr. Anselm Mwang'amba, as he exited an internet café in Stone Town. Tanzanian police eventually arrested 15 people in connection with the acid attacks, some associated with terrorism group Al Shabaab.

The attack against the tourists attracted the attention of the government, because tourism is such an essential part of the island’s economy. Eventually, influential Muslim religious leaders in Zanzibar called for calm, and the situation has been quieter for the past two years. 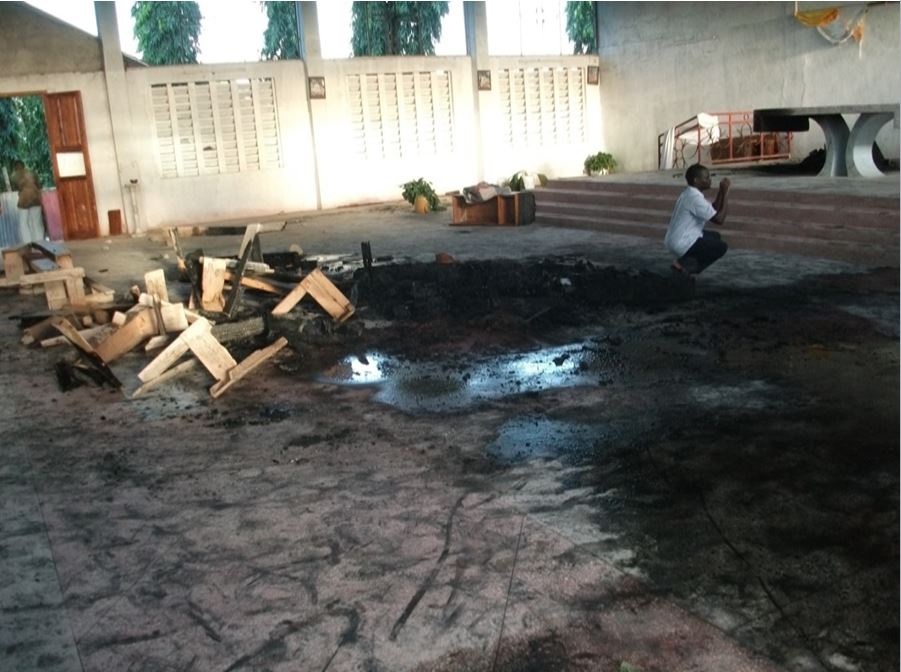 St. Joseph Mfanyakazi Catholic Church on the morning after the arson attack. An angry mob burned the piled the pews together to make a bonfire in a vandalism attack during a period of tense relations between Muslims and the Christian minority on the semi-autonomous island of Zanzibar. (Provided photo, courtesy of Sr. Yusta Tesha)

Today, Tesha and the other sisters continue their pastoral work in the slums of Stone Town while wearing their habits, which makes them easy to spot. But she said they refuse to back down or take off their veils.

“If we were to leave, we should have left in 2011 when things first started becoming a bit serious,” she said. “But we said, these are people of God, they also need encouragement. Christians are encouraged to stay there because of our presence.”

The Catholic community in Zanzibar is not well off, but they united in the face of the church’s destruction. During the Sunday collections, they eventually gathered enough money to rebuild St Joseph’s. Today, a new church stands in the same location.

The sisters take precautions, such as listening to suggestions from local leaders about places to avoid or traveling by car from place to place instead of by foot. “We try not to go alone anywhere or find ourselves backed into corners,” Tesha said.

But the Evangelizing Sisters of Mary will continue their mission in Zanzibar, just as they feel called to remote and inhospitable locations across Africa.

“There are people living there, you have to share their sufferings because they didn’t choose to be in that situation,”Tesha said. “Where there’s a need, someone has to go. Once you’re asked to go, you can’t say no. You can’t always go to places where there is peace and harmony.”