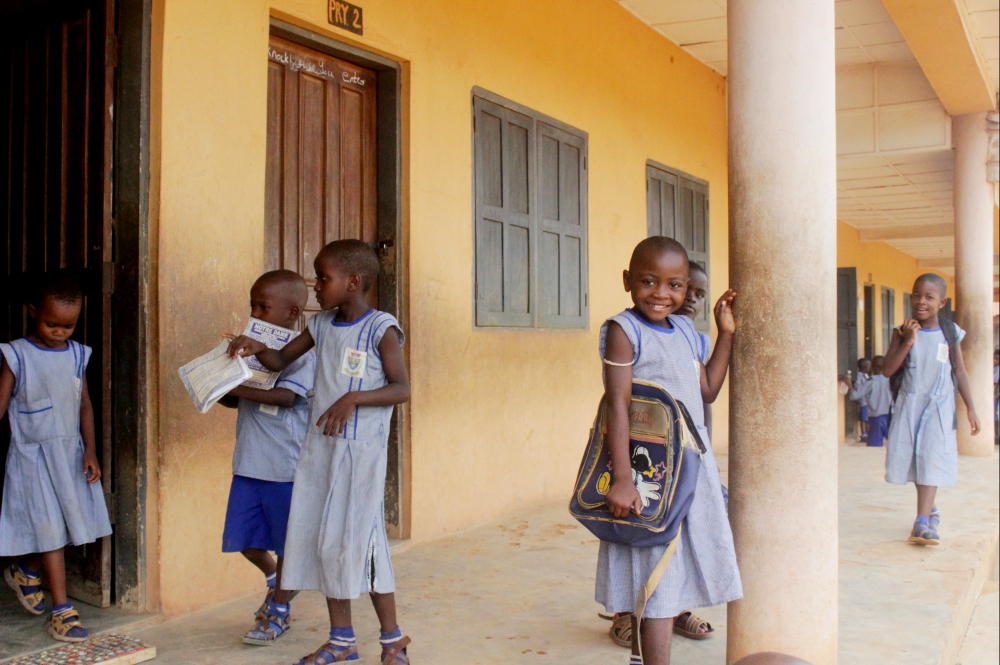 Children are seen after the bell rings for dismissal at the Notre Dame Nursery and Primary School, run by the Sisters of Notre Dame de Namur in Ugwuomu Nike, an isolated community in Nigeria's Enugu state. (Patrick Egwu)

Enugu, Nigeria — On a sweltering Monday afternoon in Ugwuomu Nike, an isolated community in Enugu state, South East Nigeria, Sr. Ifeoma Ubah is in the midst of eight schoolchildren ages 7-12 in an open field, directing them during a parade rehearsal for a Children's Day celebration in Nigeria.

It's break time, and the students of Notre Dame Nursery and Primary School are out in the field having a free, fun 30 minutes with bouts of chatter and laughter before going back to their classes. In the background, a group of girls form a circle, clapping their hands and singing old nursery-school rhymes.

"This place is just a quiet community," said Ubah, the school's headmistress. "We don't normally have visitors because the road leading to the community is very bad. So we only have members of this community living around us here, and they are mainly small-scale farmers who produce only what they eat."

Since 2017, Ubah of the Sisters of Notre Dame de Namur has been "living happily" and working in Ugwuomu Nike alongside four other sisters and 10 auxiliary staff to teach science, arts, arithmetic, technology and computer appreciation to children from poor homes and disadvantaged communities.

Founded in 1993 by Msgr. Obiora Ike, who is also the founder of the Enugu Diocese's Catholic Institute for Development, Justice and Peace (CIDJAP), the school was designed to provide basic education to children of farmers and artisans who lack access to it. The school was formerly located in a farm settlement the institute owned until Ike, who felt the sisters would be the right people to work in such a place, invited them to manage it as a way of fulfilling their charism, providing education to children of the community. 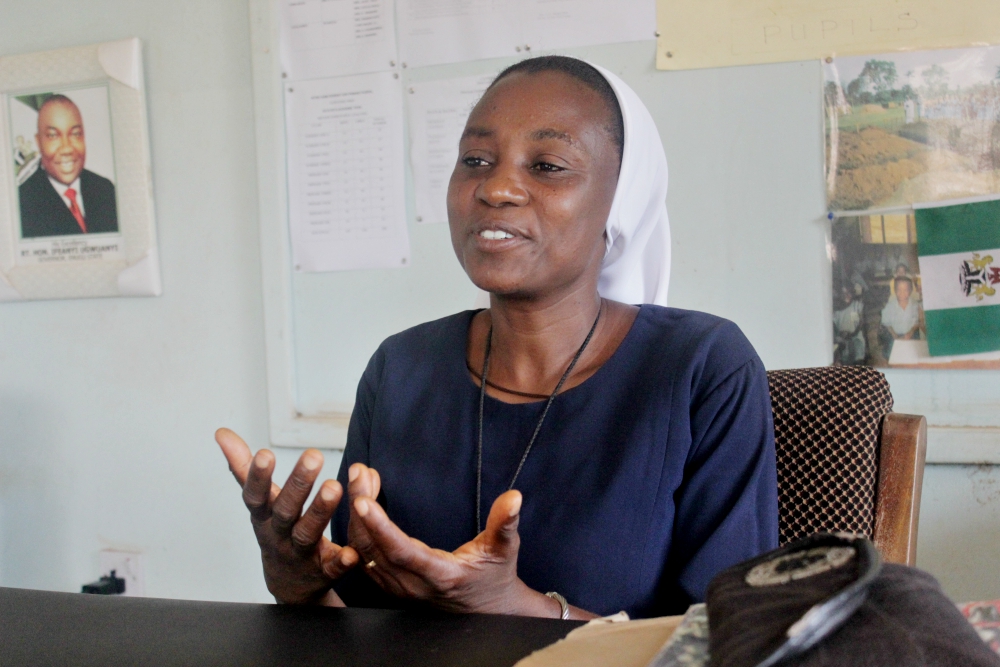 Sr. Ifeoma Ubah says providing education to the children from poor homes in the community is part of the charism of her community, the Sisters of Notre Dame de Namur. (Patrick Egwu)

"Everything about our apostolate is education," said Sr. Francisca Aneke, who worked in the school after professing her vows in 2005. "Our presence here has also brought a lot as some of the parents of the children have been employed in the school, and they have now seen the benefit of going to school."

Apart from working in the school to provide education to the children, the sisters also develop the children's spiritual and moral lives by teaching them catechesis to prepare them for first Communion and confirmation at a nearby local parish.

From 7:30 a.m. to 8:35 a.m., before classes start, the children say the rosary and read the Scripture based on the daily readings in the church's liturgical calendar. Every day by noon, the sisters lead them in saying the angelus and singing hymns. On Fridays, the sisters teach moral education based on the Catholic doctrines.

At least twice in a term, a priest from the parish is invited to celebrate Mass for them. And during Lent and Advent, the sisters organize retreats for both the children and teachers.

"This is our own way of developing a new generation of leaders who will fear God and love their neighbors," Ubah said. "We have been present in this community for more than 20 years, and our impact is felt in the type of exemplary teaching we provide for the children." 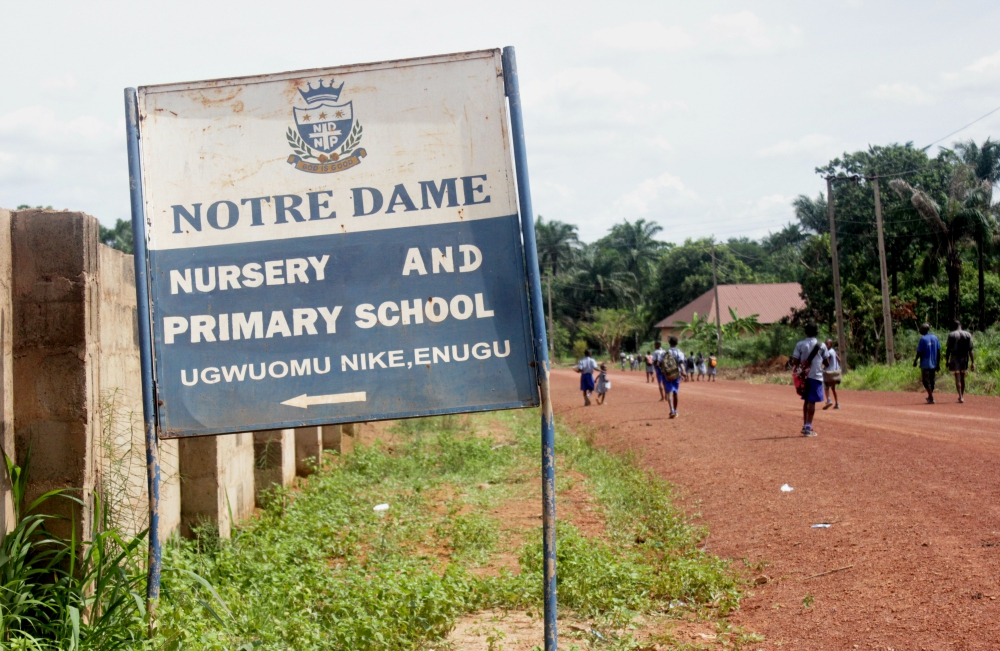 Children are seen after the bell rings for dismissal at the Notre Dame Nursery and Primary School, run by the Sisters of Notre Dame de Namur in Ugwuomu Nike, an isolated community in Nigeria's Enugu state. (Patrick Egwu)

Education experts in Nigeria say the country's Universal Basic Education Commission, which was established in 1999, and the subsequent 2004 Free Universal Basic Education Act have failed on many fronts to provide free and compulsory quality education to children at their elementary stages in the country, especially in achieving the United Nations' sustainable development goal No. 4.

There are no schools in some communities, and even where they are available, there is a lack of learning materials and basic infrastructure and facilities like classrooms, toilets, and access to clean water and well-equipped libraries. In some communities, children learn under an umbrella tree, and when it's raining, their classrooms are waterlogged. Teachers work without basic incentives and are often owed salaries.

Even when budgets are set aside for the construction and equipping of schools in rural areas, corrupt public officials embezzle the funds, and little is done to hold them to account. 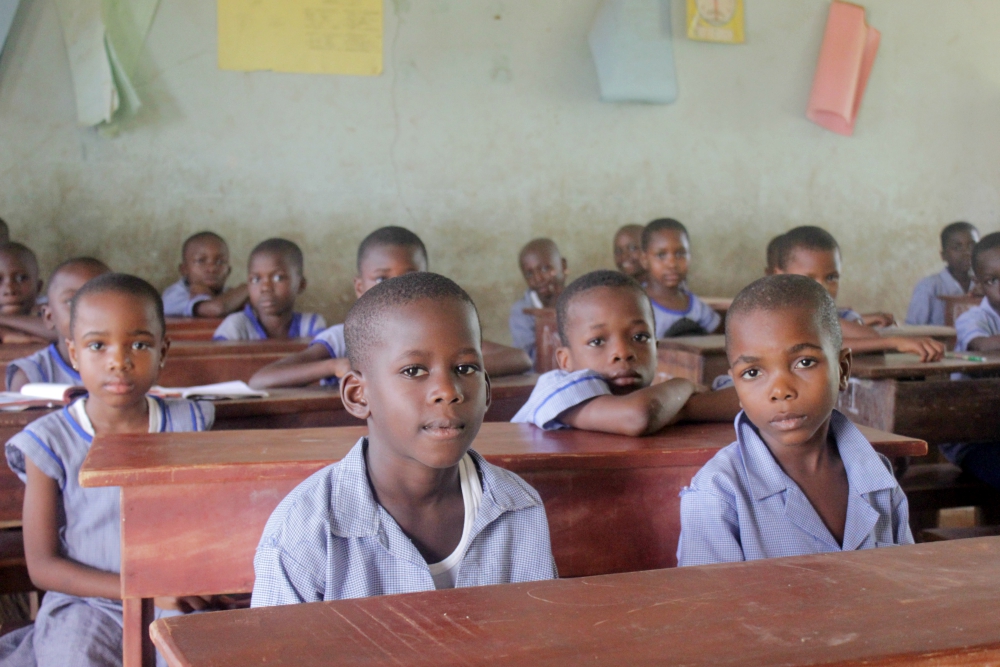 According to UNICEF, the number of out-of-school children in Nigeria reached an all-time high of 13.2 million in 2018. Children between 6 and 14 years old in rural areas and poorer communities without basic living facilities contribute to a large percent of this figure, while those in conflict zones in Northern and Middle Belt Nigeria have been displaced from their classrooms.

The sisters are stepping in to fill the gap where the government has failed. They meet publishers to print textbooks at affordable rates and pay the 3,000 naira ($8.34) tuition fees for children of parents in the community who cannot afford it. The sisters also help students find scholarships; for instance, some of the school's graduates who went to college were sponsored by Enugu Bishop Callistus Onaga.

"What we are doing here is mainly charity work," Ubah told Global Sisters Report. "Most of the things we have here come from donors because the children are from poor homes and living in farm settlements. Most of them come from neighboring states, and they trek for two hours or more to come to school. They are unable to pay their school fees, but we allow them to stay and learn because preparing them for a bright future is our primary concern."

After earning her bachelor's degree in education at the Catholic University of Eastern Africa, Kenya, in 2017, Ubah returned to Nigeria, and her community placed her in charge of the school as the headmistress. At first, she was not happy with the assignment and wondered how she would cope in an isolated school without basic amenities. 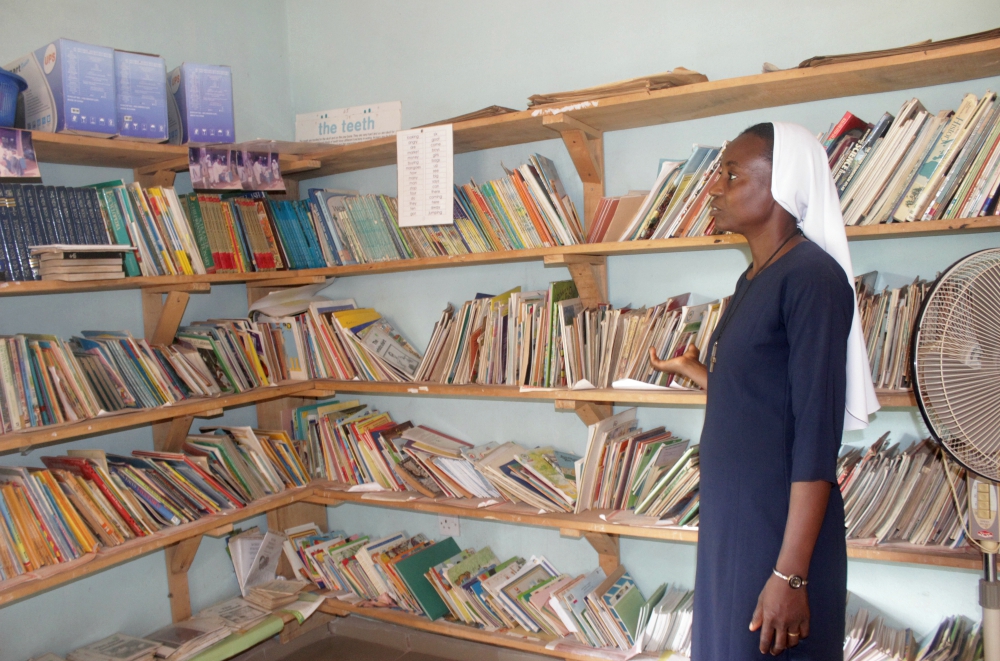 Sr. Ifeoma Ubah looks at bookshelves in the library of the Notre Dame Nursery and Primary School. The sisters say their dream is to replenish the library and add e-books. (Patrick Egwu)

"These children are very intelligent despite coming from poor homes and living in a remote community," Ubah said. "One day, when I went to Mass on Sunday, I was surprised to see them read the first and second readings, even the Psalms. After seeing this, I was motivated to continue working here despite the challenges."

The sisters rely on donors, both organizations and individuals, for support. Sometimes, they write letters to their sisters in the United States and Europe. When they receive the funds, they use them toward some of the school's basic needs, like textbooks, pencils, charts, teaching materials and buying water from a public water supplier, which can be as expensive as 20,000 naira per month.

Last year, some donors gave enough to build perimeter fencing for the school to keep the children safe, and another individual donated a solar panel to provide electricity to the sisters' convent and part of the school.

"The life I have chosen is the motivation to keep doing this work, and it has been peaceful and joyful," said Sr. Jumoke Elizabeth Balogun, who teaches math. "By teaching them and giving them what they need, I know that I am impacting on their lives that in the future they will be great people. So I want to give them all I have and teach them all they need to know." 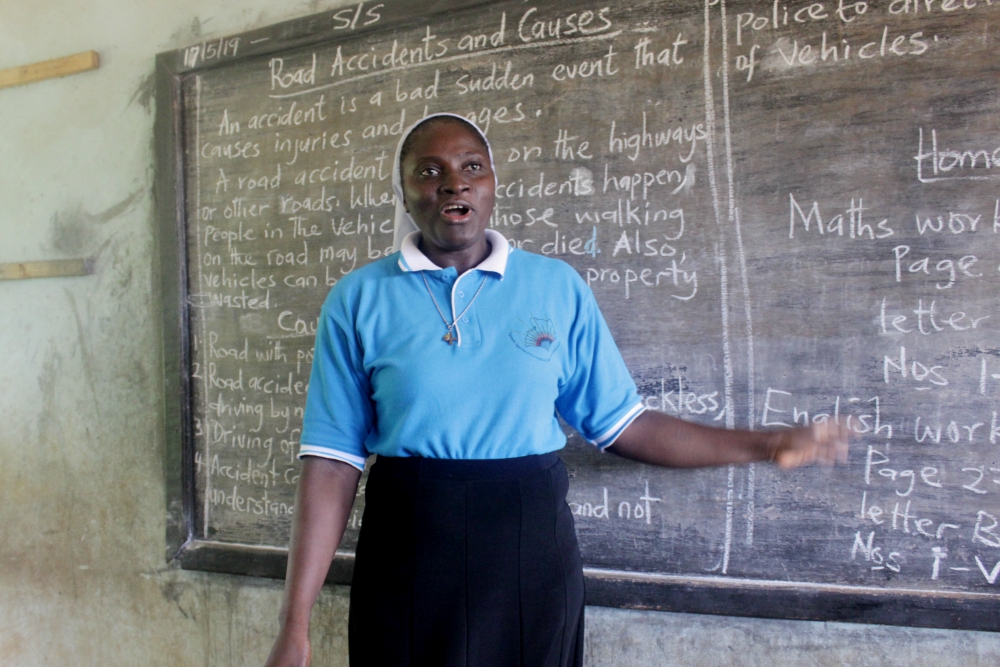 Sr. Jumoke Elizabeth Balogun says her work in teaching the children in the school has been peaceful and joyful. (Patrick Egwu)

Ubah said the government has failed the children.

"They didn't have any school in this community for a very long time, until Monsignor Ike through CIDJAP established this one," she said. "The only community school at a border community is in a bad shape and lack basic facilities and staff."

The sisters encounter some challenges in their work, too. Ugwuomu Nike is predominantly a farming community and is cut off from the central city, which is about 12 miles away. There is no electricity, access to clean water and roads or other modern facilities. At the school's inception in 1993, it operated from a makeshift building, and the sisters lived in rented apartments for 10 years with members of the community until the province built them a small convent.

Currently, the school has 260 pupils, and learning space is a challenge, as the few classes they have are overcrowded. New classroom blocks and a teachers' residential building are under construction, but finding funding to complete it has become a challenge. The sisters hope that when completed, the new building will help in decongesting the classrooms and provide the teachers a place to live.

"Staying in that type of environment could contribute to a child having health issues," Aneke said. "The sisters are working very hard to see the building completed so the children can have a better learning environment."

When donations are low, the sisters also have trouble paying the 10 auxiliary staff members who assist the sisters each month. 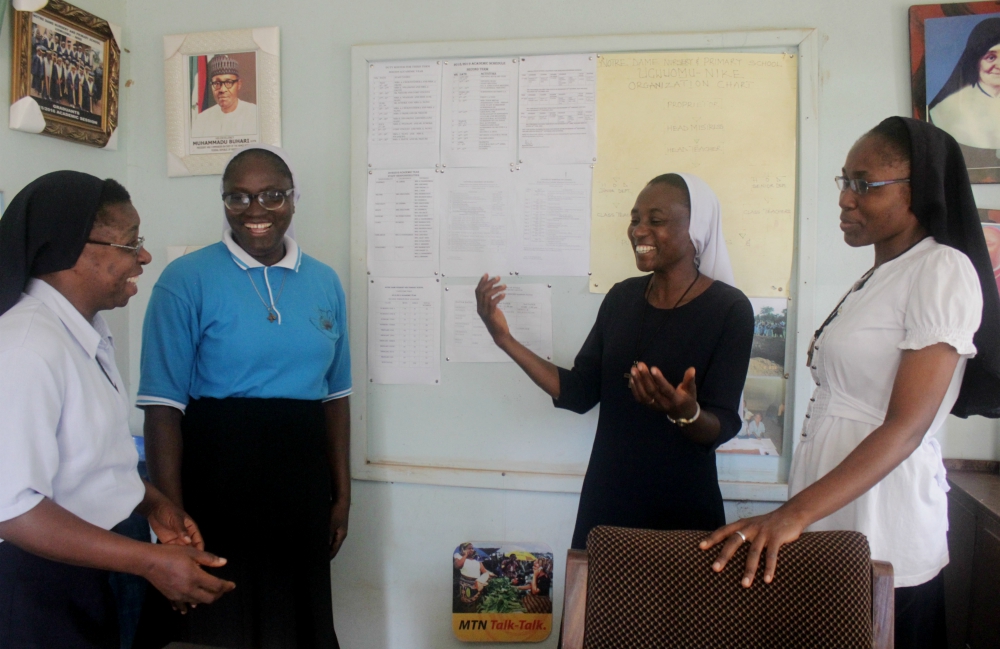 Despite these challenges, the sisters are not deterred in their work. They say it is a calling and an integral part of their mission of providing education to children in underserved communities.

"When we see how these children defy the odds and trek long distances to school and how eager they are to learn, we feel happy and motivated to teach them because we know they will be great in the future," Ubah said.

"Our dream is to give them quality education so they can compete with their mates in the city."

[Patrick Egwu is a freelance journalist based in Nigeria.]

In Nigeria, Daughters of Divine Love give hope to abandoned children