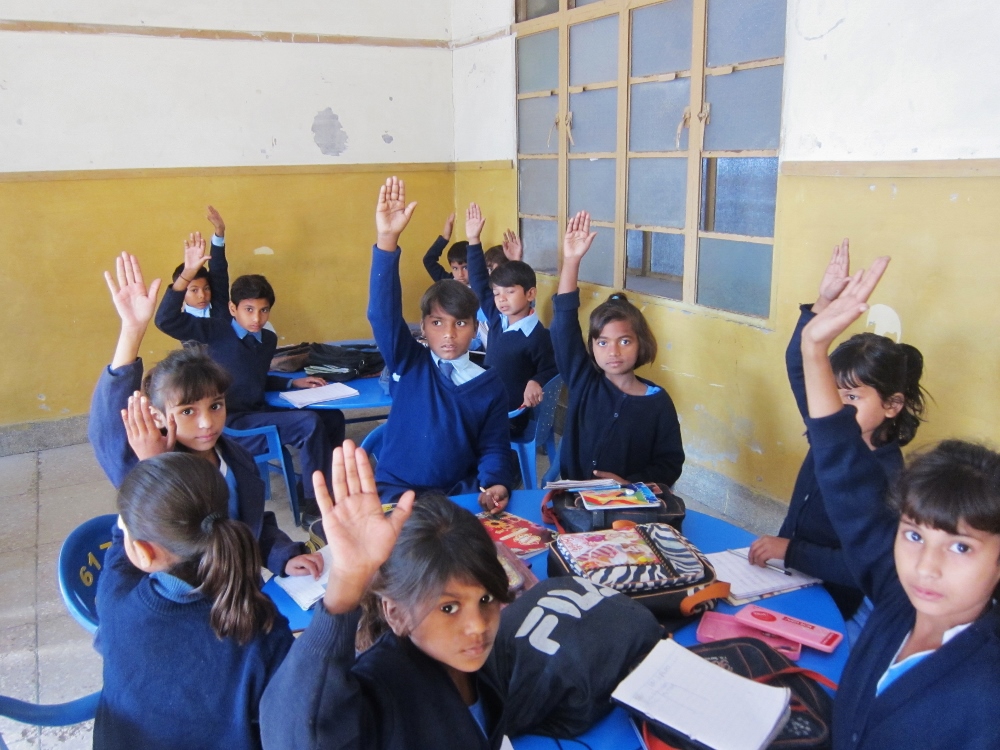 Students at St. Albert's School raise their hands to answer their teacher. (Courtesy of Loretto Community)

Faisalabad, Pakistan — “Only the pinch of salt is enough,” laughs Sr. Samina Iqbal, explaining that Christians constitute only two percent of the population in Pakistan. The same small totals apply to these three Sisters of Loretto, the first in their home country.

Yet the sisters, who visited the Loretto Spirituality Center outside of Denver recently, seem to accomplish the work of legions.

Since 2011 they have run St. Albert’s School in a slum in Pakistan’s third largest city, Faisalabad, where most people live on $1 a day and the size of houses is about 12-foot square. They ask the families of their 350 students, kindergarten through grade 10, to pay minimal tuition (about 50 cents a month) to encourage self-respect.

The context makes the work seem larger: According to a study by NGOs, only 10 percent of Pakistani women are educated to an elementary school level in reading and writing.

Sr. Nasreen Daniel explains that when they saved the school from closing, only one teacher there had a college degree. Now, because of the sisters’ support, that number is up to three. They face a culture in which parents don’t want to educate girls: After all, they’ll just be cooking for their husbands, so why bother? Daniel’s training of lay teachers should have a ripple effect. Before, only sisters held teaching positions.

Daniel proudly describes a former student who returned to say gratefully, “I passed my nursing exams because you insisted I learn English!” Although English is the official language, compulsory in schools from fifth grade on, most children don’t get adequate experience speaking, reading or writing it.

There is a common Pakistani saying: “A woman is like a pair of shoes. If it fits, it fits. If not, throw it out and get a new one.” This dismissive attitude is reinforced at weddings, when the blessing on a couple is, “May you have seven sons.” The newlyweds’ room is then plastered with photos of boys. If she has a son, the wife is pampered for several months, and the husband distributes sweets to the neighborhood. If she has a daughter, it’s “Back to work immediately!”

Christian girls have more freedom and education, but according to the Human Rights Commission of Pakistan, families killed 60 women last year for giving birth to girls; “honor killings” are still rampant.

Left: The Sisters of Loretto have set up Loretto Centers where women and girls come to learn skills that they can use to earn money. Right: A student practices his Roman letters at St. Albert's School. (Courtesy of Loretto Community)

Left: Sr. Nasreen Daniel earned her doctorate degree and now provides in-service training and workshops for teachers in various parts of the diocese. Right: Srs. Maria Daniel and Samina Iqbal learned how to install solar panels while visiting the United States, so they could set up electricity when back in Pakistan.(Courtesy of Loretto Community)

Electricity in Pakistan is unreliable, sometimes going off for 18 hours at a time. But sun is abundant, and Sr. Maria Daniel, (Nasreen’s blood sister) trained in the United States to become a solar panel installer. Now she’s the only religious in the country doing solar installation. When she worked in a village appropriately named Loretto, the chair asked, “Are you a real sister? I never heard of one doing this.”

Daniel seems to dismiss concerns about her gender and religious vocation easily, being more intent on describing how expensive it is to import components from Germany for the 12 solar projects she’s done in Pakistan.

If she can persuade a bishop to re-open a building and convince a German funding agency to support it, her dream is a technical school that might help offset high rates of unemployment. “If we could learn to make solar panels –” She leaves the sentence unfinished, but her beaming smile says it all.

The name “sewing circle” seems a quaint anachronism from the U.S. frontier, but in Pakistan, women learning to draft patterns, stitch, embroider and knit could become powerhouses. Iqbal, who leads a sewing center project established by Loretto sisters, explains that with those skills, women can earn $3 to $5 a day, far more than the ordinary laborer’s wage. Because the climate is so hot, fabric tears more easily, and an average outfit might last only a year. So the market for clothing is huge.

A side benefit of these sewing centers may be as important. They give women a safe place to talk freely. Away from home, they share stories, laugh and, if they know a girl is in danger of rape, find her security. 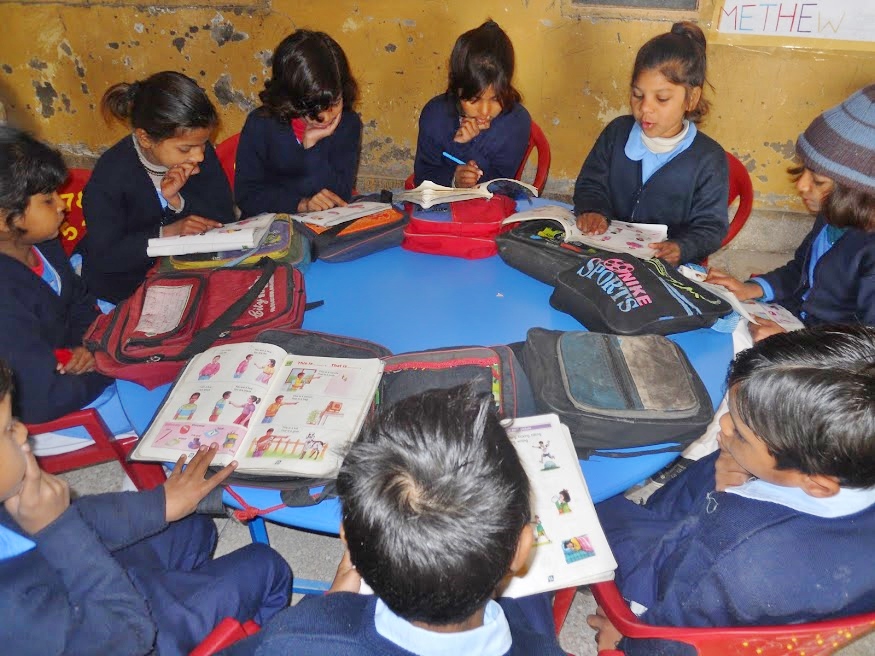 St. Albert's School is co-educational: girls and boys study alongside one another in the same classrooms. (Courtesy of Loretto Community)

Sr. Lydia Peña, a Loretto sister in Denver, Colo., is trying to raise a $1 million endowment for the Pakistan project. She sees it in clear terms: “The Gospel urges us to act for justice and work for peace. These sisters are creating an island of sanity in the midst of chaos.

“But it’s the most challenging fundraising I’ve done,” Peňa says, after a long career in the field. “Some people don’t want to give to a country in such turmoil. But I tell my friends: It’s all I want for my 80th birthday in December!”

The sisters describe the 200th anniversary in 2012 of Loretto’s beginning, when they wanted to present a play about their foundresses. (The U.S. Loretto community, like the Pakistani one, began with three sisters – but nearly 200 years earlier, in 1812.) A Muslim student longed to play Mary Rhodes, but they felt it inappropriate. Then her father pleaded, and eventually she got the role, wearing a habit!

The story is indicative of the way the sisters bring Muslims and Christians together, a vision of the country’s first president. Pakistan's leader, Mohammad Ali Jinnah, wanted people of both religions to live in harmony. Elected in 1947 when Pakistan became independent of India, he died in 1948 before he could enact that ideal. Since then, religion has become a political tool, and blasphemy laws are misused against minorities. 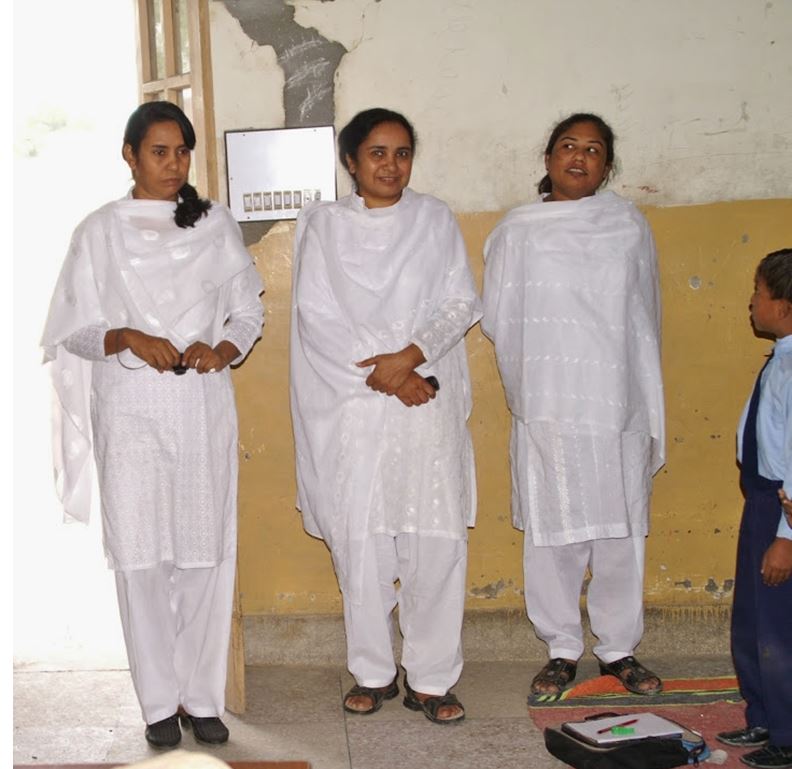 After a few weeks in the U.S. during August for retreat and meetings, the sisters were eager to return home. “We’re excited about the seeds of hope: changes we see in students, teachers, sewing centers. We need more hands for all this work,” says Nasreen. Perhaps unknowingly, she echoed Sr. Mary Luke Tobin, whose favorite saying was “hope is an open door.” Or perhaps she spoke like Pope Francis who said in Evangelii Gaudium, “I am the pastor of a Church without frontiers, a Church which considers herself mother to all.”

Nasreen had belonged to another order, but while studying in Holland, she met a former Loretto sister and decided to change her affiliation. Three Loretto presidents have since visited Pakistan, carefully changing at the airport from western clothes into flowing native dress. “Sisters do what’s needed to serve the people,” Peňa comments with a striking simplicity.

[Kathy Coffey is the author of several books about prayer, as well as catechetical resources and numerous articles in Catholic periodicals including National Catholic Reporter. She gives national workshops, retreats and conference speeches and taught for 15 years at the University of Colorado, Denver and Regis Jesuit University. Visit her website.]

Ministry | Three sisters hold up half the sky

Acting on a deep call to a different ministry