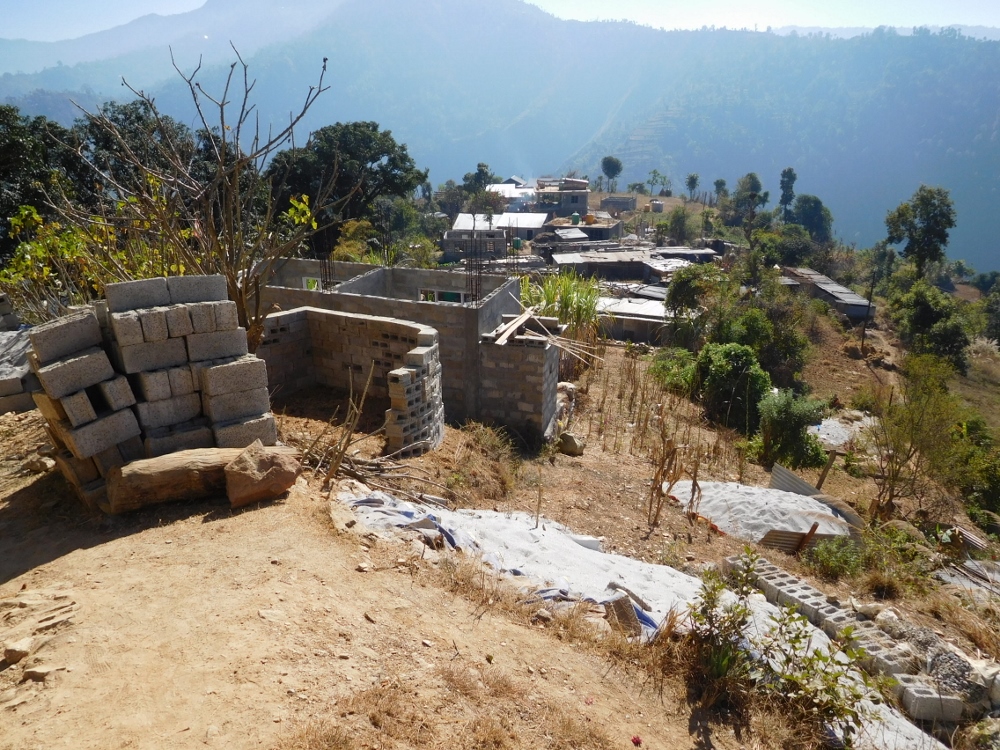 Koshi Dekha, Nepal — Even before the earthquake hit Nepal's Koshi Dekha village three years ago, Purushottam Panta was struggling with frequent bouts of depression, recalls Sr. Aisha Kavalakatt of the Sisters of Charity of Nazareth.

Addictions to alcohol and drugs he developed while working in Malaysia had ruined his marriage. He had no hope of recovery, the nun remembers.

Panta is now on a more stable path, having opened a poultry farm with some 500 chickens six months ago with the Indian nun's encouragement and support.

The 37-year-old man is among hundreds of people whom Kavalakatt and her team have helped in the earthquake-hit Koshi Dekha, some 70 kilometers northwest of Kathmandu, Nepal's capital.

However, the quake proved a blessing in disguise for Panta as the rehabilitation program initiated in his village brought new life to him, says Kavalakatt, who coordinates Navjyoti (New Light) Center in Kathmandu.

Koshi Dekha is in Kavre Palanchok District in the Bagmati Zone of central Nepal. According to the 2011 National Population and Housing Census, 1,761 people live in Koshi Dekha village. 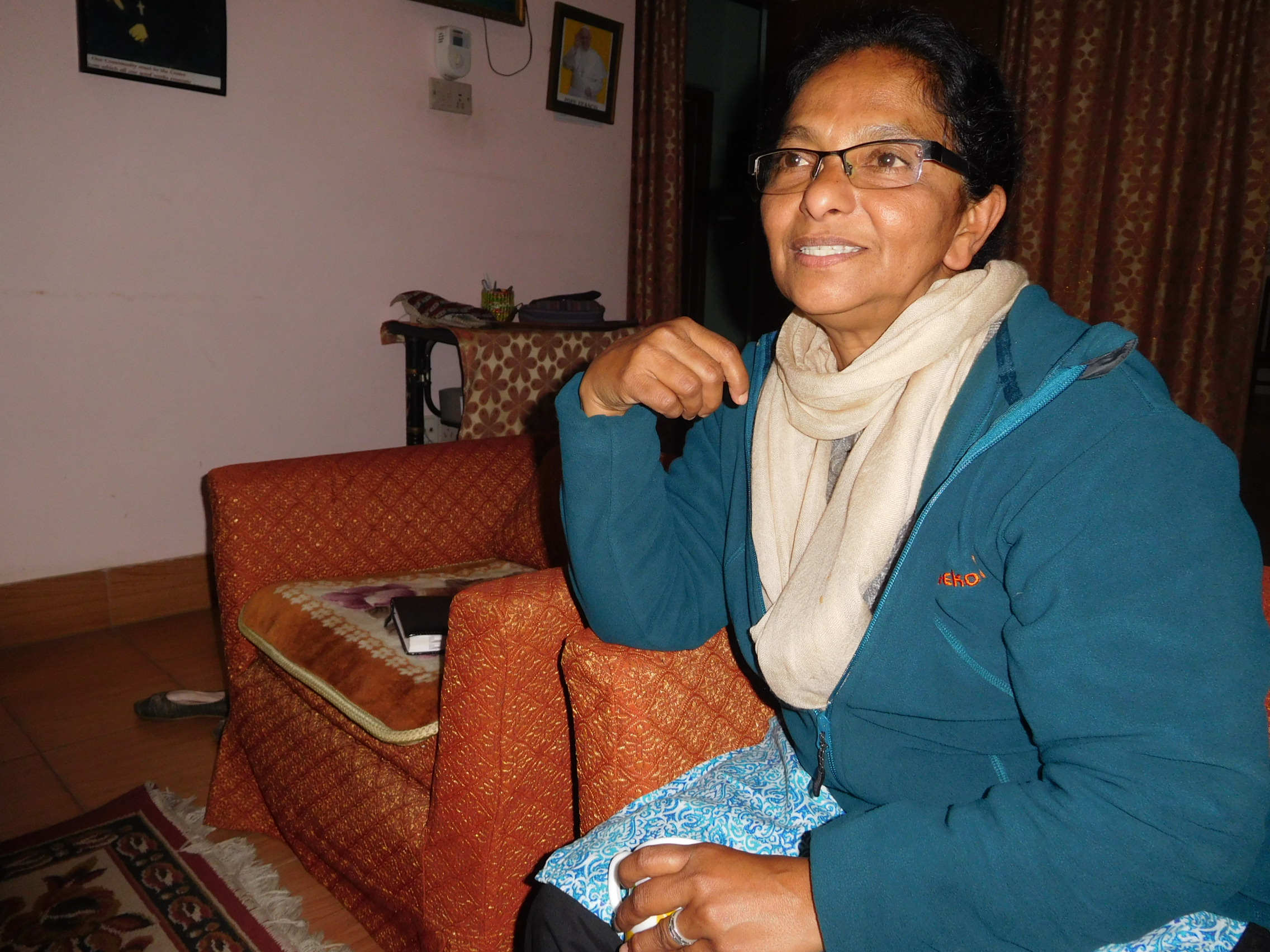 Sister of Charity of Nazareth Aisha Kavalakatt works among survivors of the 2015 earthquake in Nepal. (GSR photo / Julian S. Das)

Since his difficult experience in Malaysia, Panta no longer needs to go outside his village for work; he tends his poultry farm nearby. He is confident the farm will give him enough income and he says he does not consume alcohol anymore. He is focused on taking diligent care of his two children, he says.

"I want to set an example to our young people, who are always on the lookout for jobs outside the village," Panta tells GSR.

Navjyoti has invested 250,000 Nepal rupees (about $2,500) into the farm and expects Panta to pay back 60 percent; the remaining 40 percent he can keep as an incentive, which he said he plans to use to expand the farm.

He is protective toward his chickens, which sleep inside the poultry shed, safe from wild animals.

The nun recalls the day the earthquake hit Nepal. She was attending the first Jesuit ordination in a village. When she felt the quake, she remembered Koshi Dekha, where she had begun to organize women's empowerment groups in 2014, she says.

With roads blocked due to landslides, she went to the village with another sister from her community five days later. "I was moved by the sight of the village, which had been completely razed, and the people still in the same clothes they wore when the earthquake hit," Kavalakatt says. 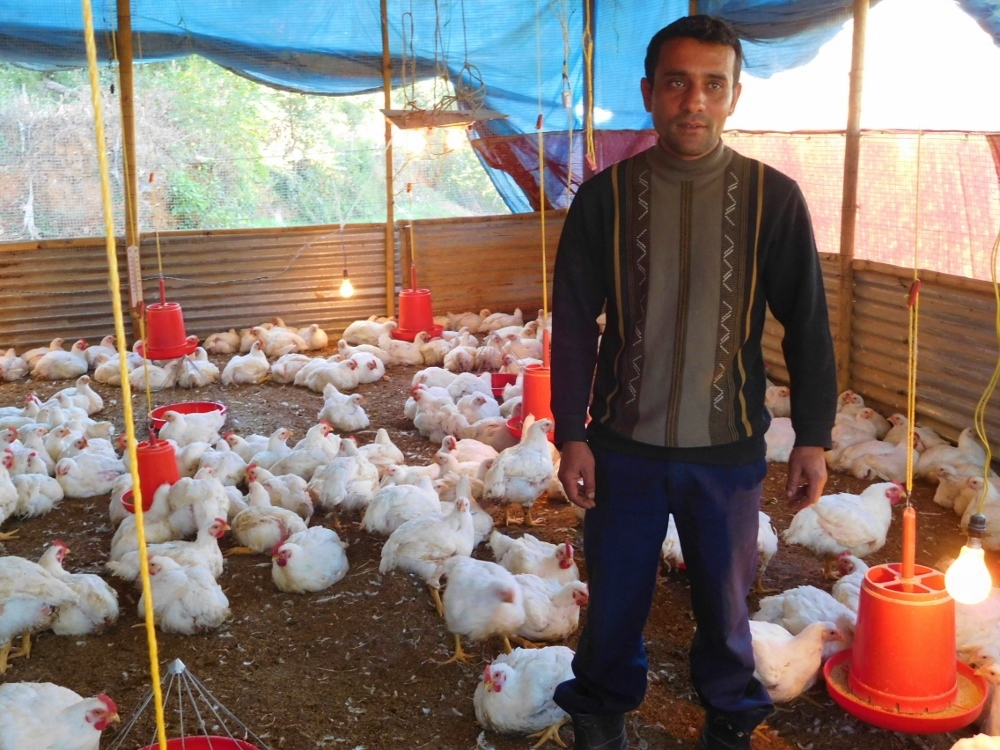 After his struggle with addiction, Purushottam Panta was encouraged by Sisters of Charity of Nazareth to start a poultry farm in Koshi Dekha village in Nepal. (GSR photo / Julian S. Das)

But what consoled her was the comment from the villagers: "We knew you would come to see us."

She sat with the villagers on that day to assess the situation and sought help from different religious communities to provide for their immediate needs.

Most relief and rehabilitation works were undertaken with the help of the villagers. Kavalakatt facilitated the works of several village committees. "I received a lot of help and support from our Indian and American sisters," she explains.

As the people did not have anything to eat, the nun arranged to provide maize and vegetable seeds and encouraged the villagers to cultivate them. And to their amazement, the villagers had a bumper crop that year, she recalls.

With the help of the villagers, Kavalakatt set up three child-friendly tents to engage the village children so that they could start to recover from the trauma of the quake. Students who had finished 10th grade and some teachers were recruited to look after them.

The Navjyoti Center set up a child development and protection center in the village to monitor how the children fared in their studies and to take care of their special needs, Kavalakatt says.

The project also provided midday meals to the children of one high school and two primary schools in the village. This helped increase attendance at the schools, she says. 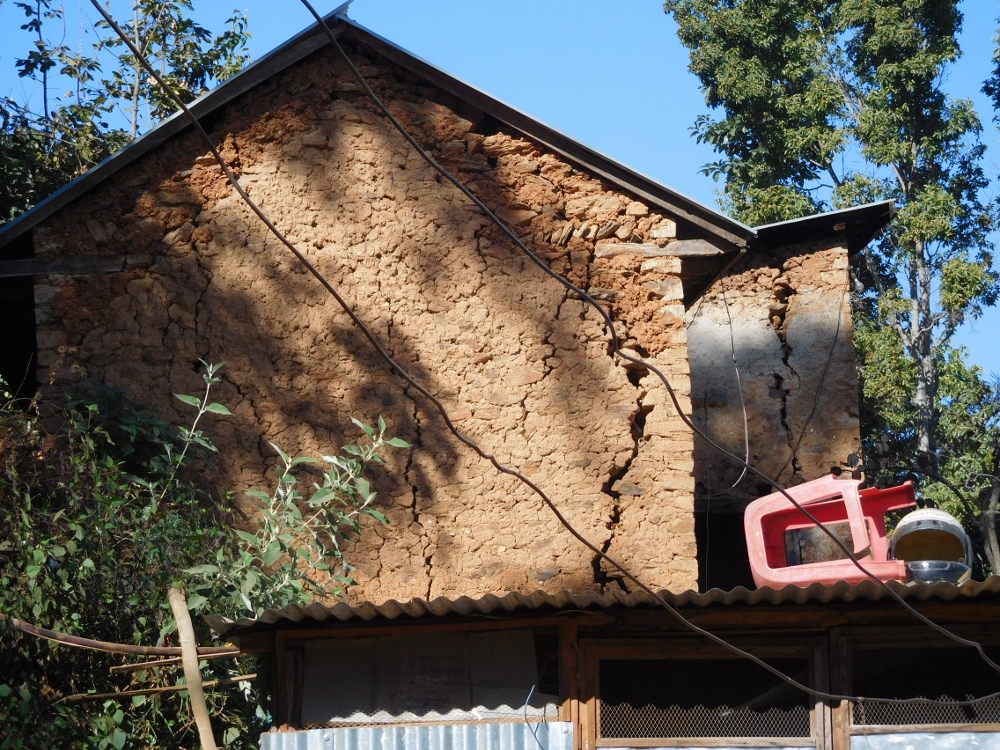 A house in Koshi Dekha village in Nepal still bears the damage from the 7.8-magnitude quake of April 2015. (GSR photo / Julian S. Das)

Ramesh Kumar Darjee, a teacher at Shree Ram Higher Secondary School in Koshi Dekha, says the lunch provided by Navjyoti continues to be an incentive for the children to come to school regularly and improves their studies.

Darjee, who is in charge of extracurricular activities, says that the school has about 350 students from low-income families, and the annual enrollment of new students is very low, sometimes fewer than 10. Even before the quake, enrollment had declined because children had to assist their families in earning a living, he says, but now the meal program is drawing in more students.

With the help of the Nepal Jesuit Social Institute, 18 sewing machines were offered to the villagers, who prepared dresses for themselves in the months after the earthquake, Kavalakatt says.

One of the blessings after the fateful day, she says, was that the local government had entrusted the relief and rehabilitation program for the village to Navjyoti Center and supported fully the efforts of the sisters in Koshi Dekha.

The people were part of every decision made for their village; some of them were part of the coordination team, which met on the last Friday of every month to assess the situation and plan for the following months, she says.

After about a year, the villagers wanted to rebuild their houses, but they did not have stones for construction. So they proposed to make their own, called "hollow bricks," and two of the villagers were sent for training. They purchased a machine to start producing the bricks, says Echhya Bajimaya, program coordinator of Navjyoti center.

Every household received 500 brick blocks, enough to make a two-room house and room for a toilet. The center also employed the family members to make the bricks and paid them the normal wage. 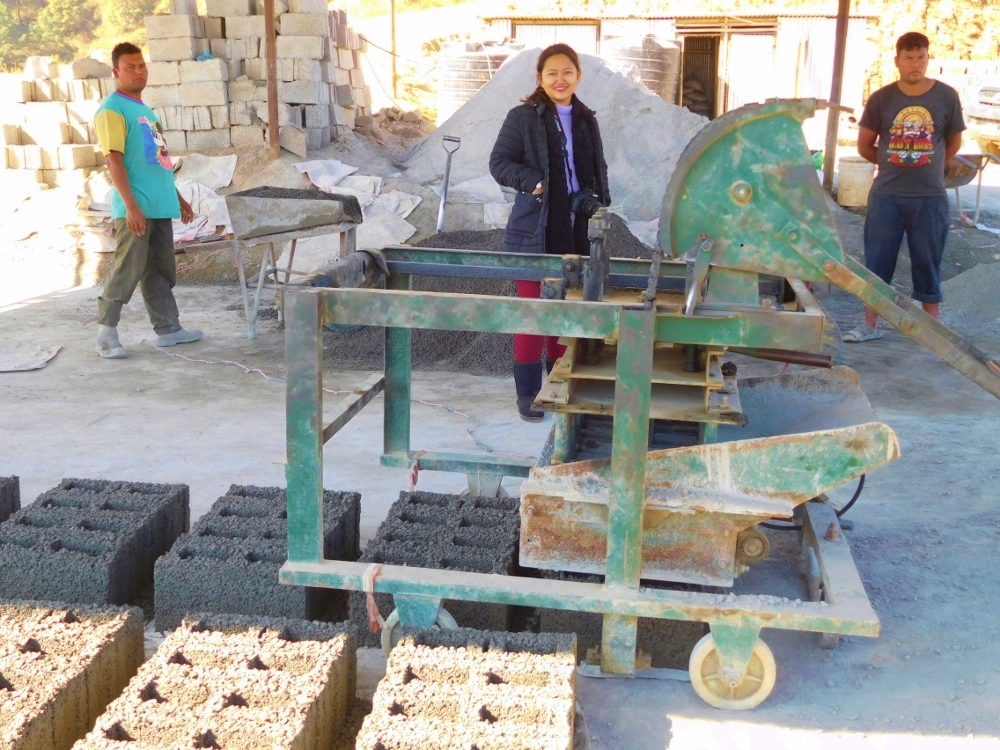 Bajimaya says the center has already distributed bricks to 450 out of the 507 families of the village, and says the other families should be able to build their own houses without help from the center.

Now that brick production is over, the villagers will decide if they should sell the machine or keep it to generate income for some unemployed youth of the village, the program coordinator adds.

"We focused on the participation of the villagers and asked for their suggestions at every stage, and often they made the decisions," she tells GSR.

One sign that the villagers were prepared to take over the project is that they agreed to contribute 40 percent of the cost to pipe in water from the nearby river to the village, Bajimaya says.

Because all the water sources in the village were disturbed after the earthquake, the villagers needed water for themselves, their cattle and their gardens. So Kavalakatt asked the villagers to contribute to the project. They "happily accepted the proposal," Bajimaya recalls.

The villagers have to set up four water pumping stations to bring water from the Koshi River. The project is expected to cost about 70 million Nepal rupees (about $700,000), says Sister Kavalkatt. "It was very touching to hear a villager say that he would sell his two cows to contribute to the water project. Another said he would sell part of his land to contribute."

The water project will provide a permanent solution to the villagers' problem, says Shyam Thapa, who monitors Navjyoti's project in the village. It would benefit 690 families in the area, providing them water for drinking, personal needs, animals and kitchen gardens. 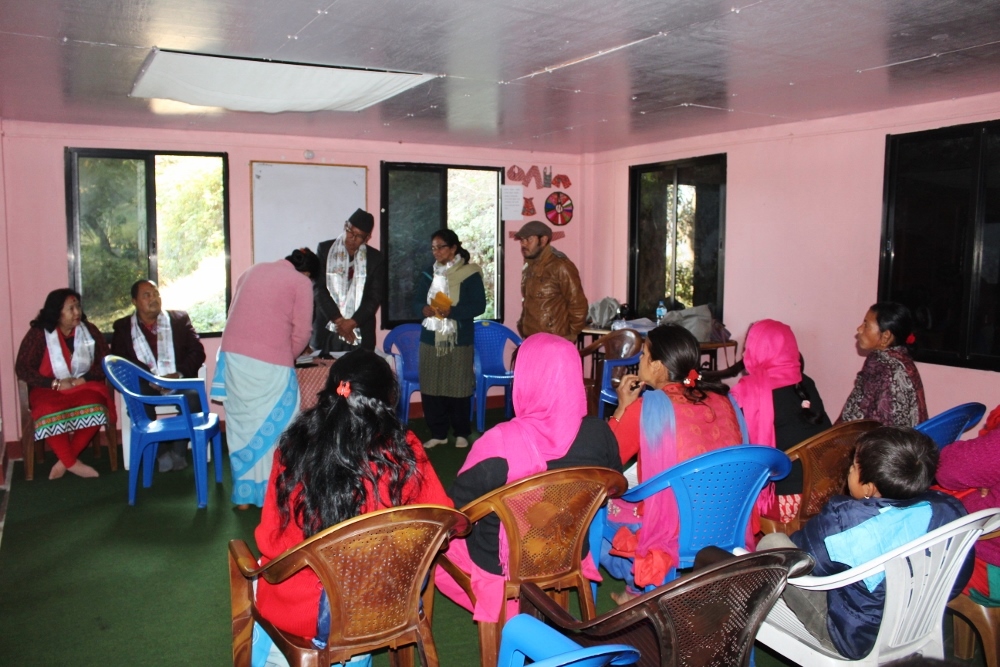 "Our people believe that if ever there is a time when this river dries, that would be the end of the world," he says.

Thapa explains that their center works on the needs of the villagers. "So all the villagers are very happy to cooperate in the initiatives of Navjyoti, which for them is their guardian," he claims. While other non-governmental organizations came to distribute some relief material and left soon afterward, only Navjyoti remained with the villagers, helping to knit their lives together.

Thapa, the 27-year-old coordinator, says Navjyoti has initiated many livelihoods and income generation projects in the village, which even the government could not do.

Bajimaya says that some major concerns of Navjyoti in rebuilding the village are to help the beneficiaries take the lead in sustainability, long-term impact, fight against hunger, and gender equality.

Jamire is a hamlet close to Koshi Dekha with 39 houses, all of which were demolished during the earthquake, and this is the place where people are most cooperative with the initiatives of Navjyoti, says Bajimaya.

Krishna Bahadur Thapa, who lives in the hamlet, says his people still have what Navjyoti had given them. "The government had promised several things, but we got very little," he says.

Kavalakatt and her team have ensured that "we have at least a roof over our heads," he adds. 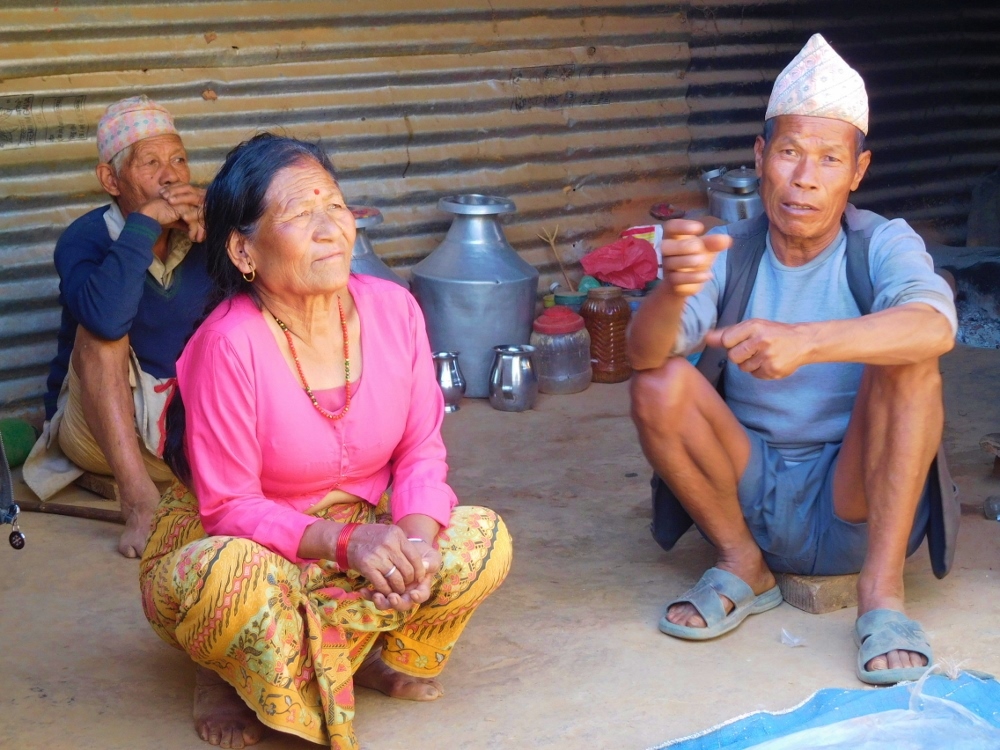 Krishna Bahadur Thapa and his wife share the positive effects of a water project led by the Sisters of Charity of Nazareth in Jamire, near Koshi Dekha village. (GSR photo / Julian S. Das)

The nun is also happy that with the help of Navjyoti staff she could bring about an attitudinal change in the people; they now decide what is best suited to their conditions and situations.

Jesuit Fr. Arulandandam Soosai, regional director of the Nepal Jesuit Social Institute based in Kathmandu, says Navjyoti has done "a commendable job in Koshi Dekha, and the participation of the villagers in the projects was very effective."

Kavalakatt "is with the people most of the time, and it would have been very difficult for her to approach government officials and other leaders to get things done for the village," he adds.

The Charity nun says their "little attempts" have built leaders out of villagers and have united people. "Now people think that they must be together to rebuild their lives and go forward in life," she adds.

The village reconstruction work was also a spiritual experience for Kavalakatt. "Even after the devastating earthquake, many villagers could count the blessings of God, rather than cursing their fate," she recalls.

She believes that by 2020, the villagers will become self-sufficient because of the systemic change that is slowly transforming the village. "Then I don't have to be with them to help," she says.

[Jesuit Fr. Julian S. Das was the former editor of The Herald, the weekly of the Calcutta archdiocese. He was the director of the Jesuit-managed Chitrabani ("sound and light"), founded in 1970 in Kolkata, as the first media center in eastern India.]

No room for compassion fatigue