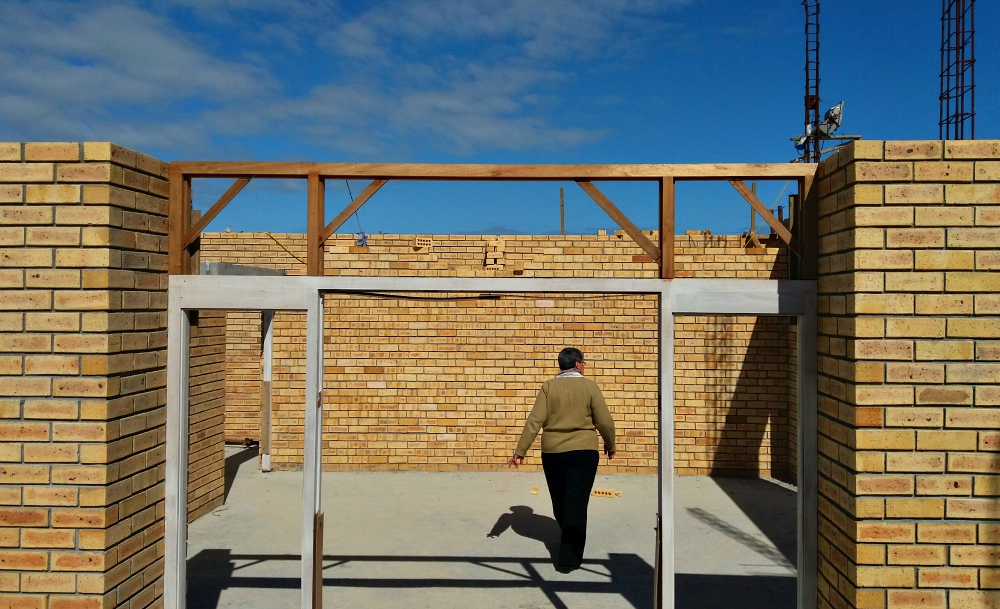 Salesian Sr. Ana Maria Mainero walks into the skills training center in Delft, where she is helping to offer job training to youths at risk of joining neighborhood gangs. (David Reiersgord)

Delft, South Africa — It's not the gangster language itself that worries Sr. Ana Maria Mainero, a Salesian Sister of Don Bosco. What worries Mainero is when young children start using those words, signifying their uneasy relationship with neighborhood gangs.

Words like hos ("hello"), kapadien ("captain"), stiek ("stab"), skiet ("shoot") and daala ("I dare you") echo through the streets, part of the insular world of gangs that are threatening to swallow the neighborhood's children.

Mainero works in Delft, a small and overcrowded township on the outskirts of Cape Town. Gangs are strongest in areas like Delft with high unemployment, because young people here have no other option to survive economically. And the gangs bring other issues to the neighborhood: violence, crime, and drug and alcohol addiction.

Mainero is hoping to provide an alternative to gangs with the construction of the Don Bosco Skills Training Center. She believes that teaching young people concrete skills, combined with a healthy dose of confidence-building and faith learning, will help graduates land jobs that will keep them out of gangs.

"The great concern is that the gangs take the young people in at a very early age," she said. "The children are familiar with [gangs], and they grow up with that as something normal."

Mainero added that many teenagers who come from broken families are desperate for a sense of belonging. Gangs provide both a surrogate "family" as well as a way to make money through theft or drugs, seemingly solving both needs. "It's all part of the environment that is conducive for the kids to join the gangs," said Mainero.

"At any time of the day, there are shootings, because [gangsters] perceive people are invading their territory," she said. "There is total insecurity. It's devastating when you have to go out of the house and look around the corner to see if there is some suspicion or shooting that can develop. It's a constant feeling of being alert, because even at lunchtime, the morning — any time is good to shoot."

Eleven people were killed in the course of a single night on Sept. 29 in Philippi East, a community located 6 miles from Delft. According to one report, about 20 gang members opened fire on locals who patrol the area at night in an effort to promote a neighborhood crime watch.

In Delft, gangs have created a turbulent environment of violent crime. In 2016, there were 143 murders in this community of roughly 152,000 people. That is almost four times the national murder rate of 25.6 murders per 100,000 people. In August 2016 alone, 31 people, most of them teenagers, were killed in as many days in gang-related violence in Delft. 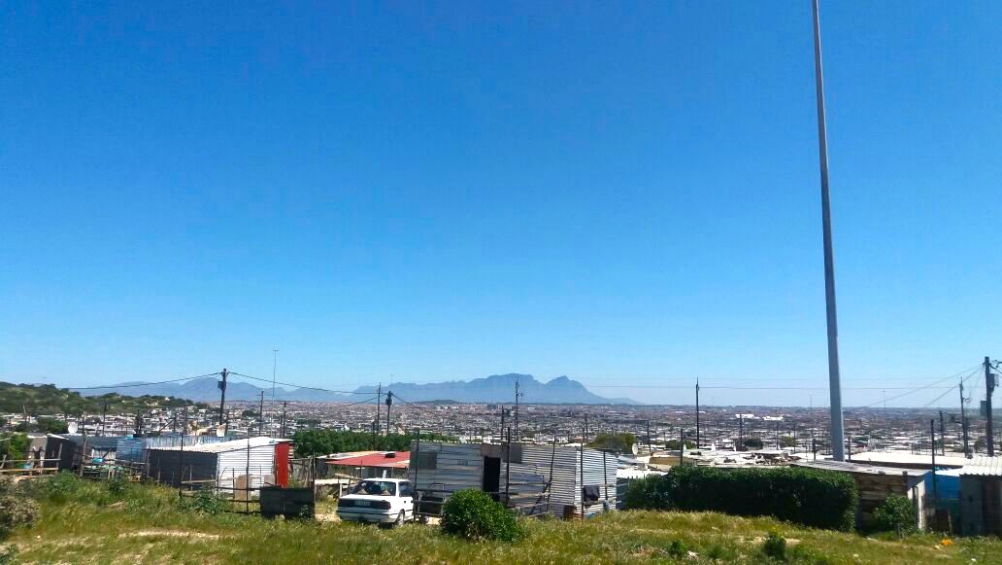 The proliferation of gangs in Cape Town can be directly traced to South Africa's history of apartheid. Apartheid urban planning strictly enforced segregation of racial groups, and locked people into communities with limited resources. Apartheid, an Afrikaans word that loosely means "separate development," was an official policy of white supremacy from 1948 to 1994.

In Cape Town, areas in the city center like District Six, once a vibrant, multiracial neighborhood, were destroyed and rezoned for whites only during apartheid. "Support structures in the community were destroyed, and families were broken up," said Don Pinnock, an author and researcher who has written extensively about gangs in Cape Town.

As traditional family ties were destroyed by government action, gangs arose to take their place. Even after the transition from white minority rule to democracy in 1994, the legacy of discrimination and destruction of family networks remains. Historically black areas have continued to struggle with increasing rates of unemployment and rampant gang violence.

In South Africa, unemployment is shockingly high. According to the most recent government figures, the general level of unemployment has steadily risen to 27.7 percent. The expanded definition, which includes those who want to work but have stopped looking, is even direr: More than a third of the work-age population — 36.4 percent — is unemployed.

However, the statistics also point to the solution for unemployment: education. Only 7 percent of graduates of higher education are unemployed. The vast majority of people who are out of work, 72 percent, have not completed high school.

Poor education, the lack of opportunities, and few job prospects cause many youths to see gangs as an opportunity to earn money and feel a sense of community. "If kids had something else these days, they would go for it," said Pinnock. 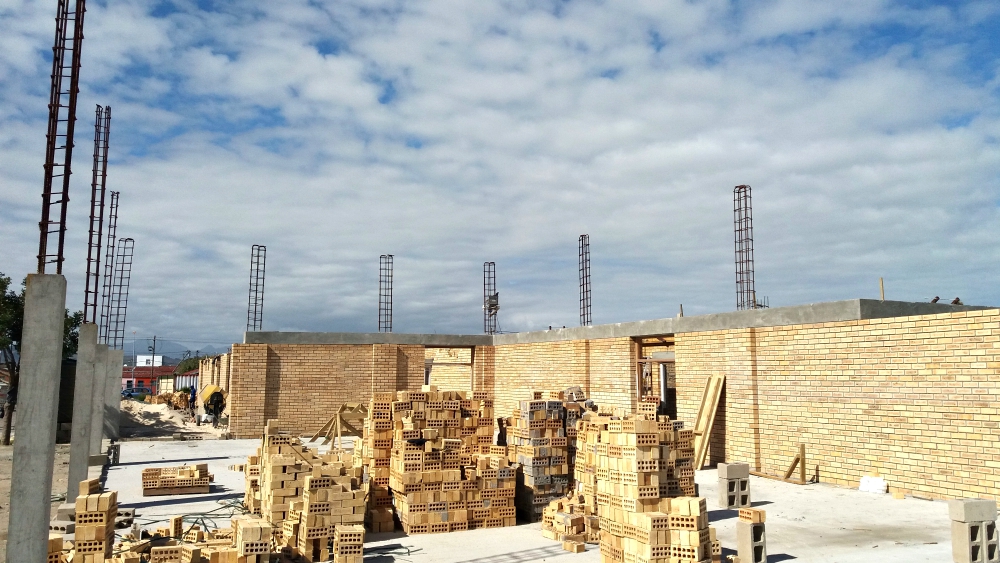 Construction of the Don Bosco Skills Training Center at the Jubilee Church of St. Lawrence in Delft. The facility is expected to be finished in March 2018. (David Reiersgord)

"Gangs are scary," he said. "[The kids] don't particularly want to be there. But gangs are the only game in town in some cases. Gangs are surrogate families, and gang bosses are surrogate fathers. They're not only about violence, because they satisfy personal needs and psychological needs, too."

Mainero hopes that one of the defining characteristics of the new center will be the cultivation of a sense of belonging within the community. "That is one of the things that here there is not, because there is no proper family structure," she said.

Which is why Mainero and others are looking for solutions to give young people an alternative to gangs through employment training. They use an approach based on Christian values that focuses on combining educational classes with life skills training such as personal responsibility. This approach helps individuals feel confident to seek out opportunities to improve their lives.

One vocational skills center in the area that already uses faith-based training is Learn to Earn, in Khayelitsha, a township of nearly 400,000 people located a few miles from Delft.

Learn to Earn has been operating for 28 years, and provides training in sewing, woodwork, graphic design and other areas. In addition to these skills, they also provide life skills training based on Christian values. This combination has a positive impact on lives of individuals from communities where opportunities are limited or simply not available.

"[The guys in this class] don't come from an artistic background," said Simphiwe Norusha, 27, from Khayelitsha, who is enrolled in graphic design at Learn to Earn. 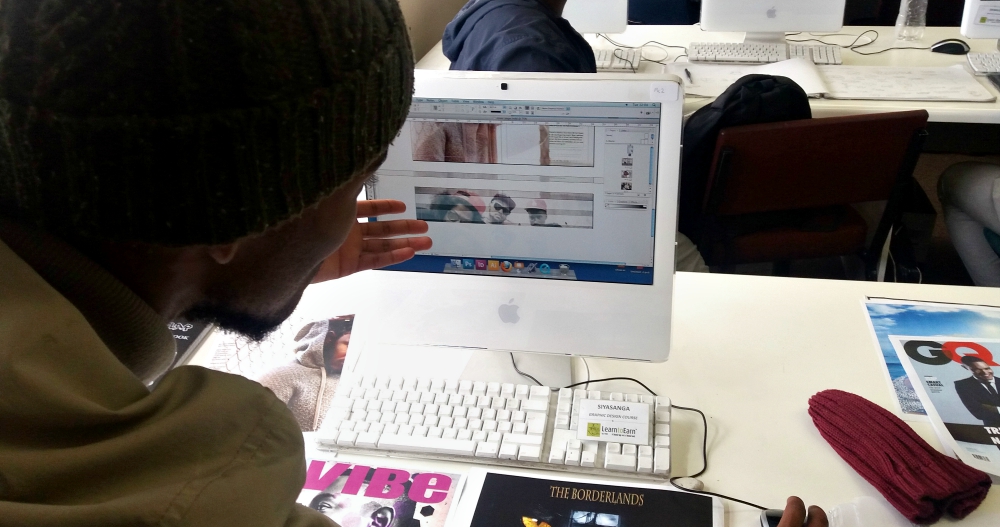 Siyasanga Sikezwa, 23, demonstrates the graphic design work he does at Learn to Earn. (David Reiersgord)

"I wasn't exposed to different kinds of design, because these are taught at private institutions [or] design institutions," Norusha said. "I didn't know these places. I've never studied anything creative. In our minds, it always seems like something far. You think graphic design, you think somewhere far."

Norusha plans to study further after completing his course at Learn to Earn, continuing to enhance his skills and expand his growing network.

At the Jubilee Church of St. Lawrence, a Catholic church in Delft, Mainero is overseeing the construction of the Don Bosco Skills Training Center, where she hopes to replicate some of Learn to Earn's successes. Construction is expected to finish in March 2018.

The skills center will initially serve 15 people at a time, and provide training in literacy, computer literacy and hospitality skills, along with "soft skills" like self-confidence and responsibility.

These courses will be designed for high school dropouts, a serious problem that further limits employment opportunities in a place where jobs are already scarce.

Mainero has realistic hopes for the program. "We will not change the life of Delft," she said. But she hopes that the center's teaching of educational courses, alongside skills like networking, responsibility and accountability, will empower the individual lives of the young people who come for training.

Andrea Cortemigilia believes that faith-based approaches make a difference in the sustainability of skills training to solve unemployment over the long term. He works as a Southern Africa development mentor for Misean Cara, helping organizations like the Salesian Sisters draft funding proposals. 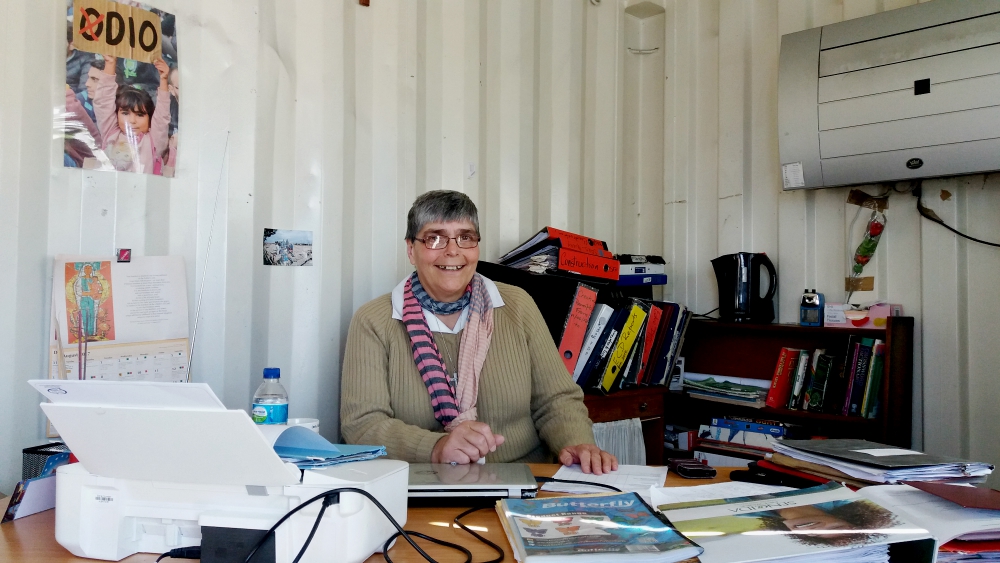 Sr. Ana Maria Mainero in her office at the Jubilee Church of St. Lawrence in Delft (David Reiersgord)

"They totally understand the skills only take the youths halfway through," he said. "What really matters [with vocational programs] is that they get the job so that they make a living out of it. Otherwise, they go back home with their skills and they're even more trained than before, because now they know how to do welding, for example, and still they don't have a job. So, in the framework of faith-based skills-training centers, there's this idea of going the extra mile, supporting the students to the extent that is necessary."

Mainero echoes this sentiment. She hopes that when the Don Bosco center opens early next year, she'll be taking a step toward building a Delft where she doesn't hear the gang language echoing down the street or have to look both ways for possible violent interactions around every corner.

"The final aim of the center is to get them into employment," she said. "Otherwise, you frustrate more people. They learn, and they get a skill that's very valid, but without help they go back to the street."

[David Reiersgord is an American freelance writer based in Cape Town who works in international higher education.]

Living the joy of the Gospel