Skip to main content
This story appears in the Selma and Archives feature series.

Among these was the only Roman Catholic nun who made the march. She is Sister Mary Leoline Sommer, a tall, serene Sister of Charity of the Blessed Virgin Mary stationed in Kansas City whose Route 80 sunburn has now turned to a tan. She went to Washington Monday on a trip paid for by friends to join eight others in trying to convince Representative William L. Dickinson (R. Ala.) that his charges of immorality were untrue.

Failing to dissuade Dickinson from reiterating his accusations in the House chamber on Tuesday, they concentrated their energies on rebuttal. They compiled a joint sworn statement “on morality in the Selma crisis,” seven statements refuting specific Dickinson charges, individual statements covering all phases of the demonstration and copies of telegrams from 36 widely- known clergymen who participated and denied Dickinson’s charges.

Copies of the documents were circulated among congressmen by the nine witnesses. Following an hour-long talk by Dickinson at Tuesday’s House session, the documents were introduced into the Congressional Record for April 27 by Rep. Joseph Y. Resnick of New York. Several other congressmen also denounced the substance of the charges and their issuance under immunity in the House.

“Secondly, that regardless of the many, many sincere, devoted, dedicated Christian and God-fearing people involved in the march, the undergirding structure that gave strength, cohesiveness, direction and financial assistance and the drive to the various groups was the Communist party.

“Thirdly, that the American taxpayer was subsidizing this type of activity to a very large extent.”

Dickinson read nine affidavits from Alabamans swearing that they had witnessed immoral conduct by demonstrators. He said he had not verified the statements. “I am not going to vouch for the authenticity or the veracity of any affidavit or any individual whose affidavit I hold,” he said. “I feel it is incumbent upon this House through the proper committee to ascertain whether or not these statements are true.”

Some of the statements attributed immoral actions to clergymen and religious, Dickinson told the House he believes the demonstrators in clerical or religious garb were impostors. He accused “King Martin Luther” of being a “modern-day dusky Elmer Gantry,” and complained that J. Edgar Hoover had denied him access to F.B.I. files in an effort to find information on “Dr. King’s affiliations with Communist and Communist-front organizations.”

Dickenson did not display photographs which he had earlier said would be used to back up his charges of immoral conduct.

Besides Sister Leoline, the religious leaders – selected for their ability to give firsthand information on all phases of the affair – included the head of the security detail for the march, the seminarian who supervised 60 other theology students in the tent and clean-up crew, an Episcopal priest who made the entire march and another minister who was on the night security patrol. Several had spent more than a month in Alabama.

“WE DIDN’T go to Washington this week to defend ourselves,” Sister Leoline said. “We went to try to get the meaning of Selma back in true focus.” Charges by the congressman about the caliber and actions of the marchers “cannot harm us,” she said. “But throughout the country the headlines they were getting were both giving all marchers a black eye and clouding the issue of Christian witness for civil rights.”

Sister Leoline said she had examined the photographs Dickinson referred to and that they showed tired people resting on the march. “There was nothing offensive to me in any of them relating to marchers. We were there on a pilgrimage. We were not well-dressed business men but the poor and the weary. Most of the 300 were poor Alabamans. Mud on your-shoes was a symbol of oneness.”

In here sworn testimony Sister Leoline pointed out that great care was taken to select the 300 persons who were to march the entire way. Only 22 outsiders were allowed to participate, and these had been “carefully selected and screened for their character and purpose.” Of this group the majority were clergymen or religious women.

“During the next two days I marched, ate and rested with these 300 people. I talked with many of the Negro people young and old, and made many friends. I also became well acquainted with the other outsiders and found them not only wholesome and well-mannered but I would say the most truly Christian and religious of any people I have ever known.

“The conversations we had, the songs we sang were religious as well as inspiring. Many of us took part in religious services each day and quotations from the Scripture for the day were heard frequently. Never during these days or any other time did I see any immoral conduct or hear anything suggestive of such on the part of those who were taking part in the march or identified with groups who sponsored the march.”

Others testifying in sworn statements said the only objectionable actions they noticed were lewd gestures and hate sates from white Alabamans.

Sister Leoline, a native Californian who has been a teacher and parochial school principal for almost 20 years, said that as a teacher she had to point out to Representative Dickinson during their conversation that nuns rarely shave their heads these days. A few strands of hair which showed under the headgear of some were cited as proof they were all fakes. Also, she said, a picture which appears in Jet magazine captioned “Sister Leoline” is not she but an Episcopalian deaconess. 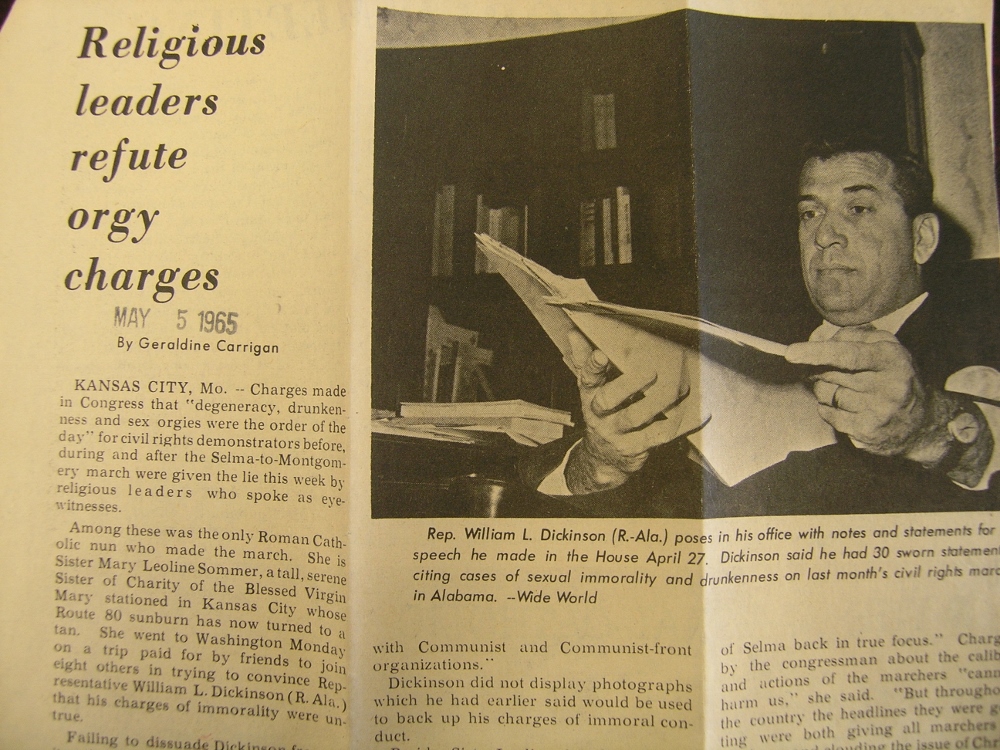