Skip to main content
This story appears in the Selma and Archives feature series.

Sister Alexine’s story had to be taped

A Roman Catholic nun was scheduled to speak at a Methodist religious service by way of a tape recording after a “misunderstanding” halted plans for her personal appearance.

The nun, Sister Alexine of the Sisters of St. Joseph, taped an account of her experience as a volunteer nurse at Good Samaritan hospital in Selma, Ala.

The recording was to be played during the offertory at the Sunday services at Central Methodist Church in downtown Detroit. It was to be followed by an “ecumenical” collection in behalf of the Catholic hospital.

Sister Alexine originally planned to make the April 4 appeal in person, at the invitation of the Rev. James H. Laird, pastor of Central Methodist. Dr. Laird said plans for Sister Alexine’s appearance were canceled on orders of the Detroit chancery.

The chancery, in a prepared statement, denied ordering Sister Alexine to cancel her appearance. It said it merely told her to make her appeal after the service was concluded.

“By Church law and, according to Catholic conscience, divine law, a Catholic may not actively participate in a non-Catholic religious service. Sister Alexine’s talk was to have been given during that part of the Central Methodist service known as the offertory.

“It has been long-standing law in the archdiocese, even when a mission collection is taken in a parish of the archdiocese for the benefit of nuns engaged in mission work, the nuns themselves do not make the appeal.

“In support of the ecumenical movement, the chancery did grant permission to Sister Alexine to address the congregation in Central Methodist Church in the church itself as soon as their religious ceremony would be concluded.

“This offer was rejected by the pastor of Central Methodist Church.”

Dr. Laird said, “I didn’t interpret this as being a counter-offer by the chancery. My position now is that it seemed quite logical and reasonable that the appeal precede the collection.

“I thought that it was a rather nice gesture to receive an offering in a Protestant church for a Roman Catholic hospital. I still think so in spite of the rebuff.”

The Rev. Edmund Battersby, director of the Archdiocese Information bureau, said, “We feel we did everything we could to be ecumenical. Nobody can take an active part in a non-Catholic ceremony.”

Sister Alexine, a nurse at Detroit’s St. John hospital and a graduate student at Wayne State University, was invited to Central Methodist by Dr. Laird after he heard her address a crowd of 2,000 persons at a civil rights rally March 21 at the University of Detroit Memorial Building.

Good Samaritan Hospital in Selma is operated by her congregation and is, Sister Alexine said, the only Selma hospital which admits Negro patients. In her University of Detroit talk, Sister Alexine told of “shortages in everything … drugs, beds, hospital gowns and even safety pins in the nursery.” 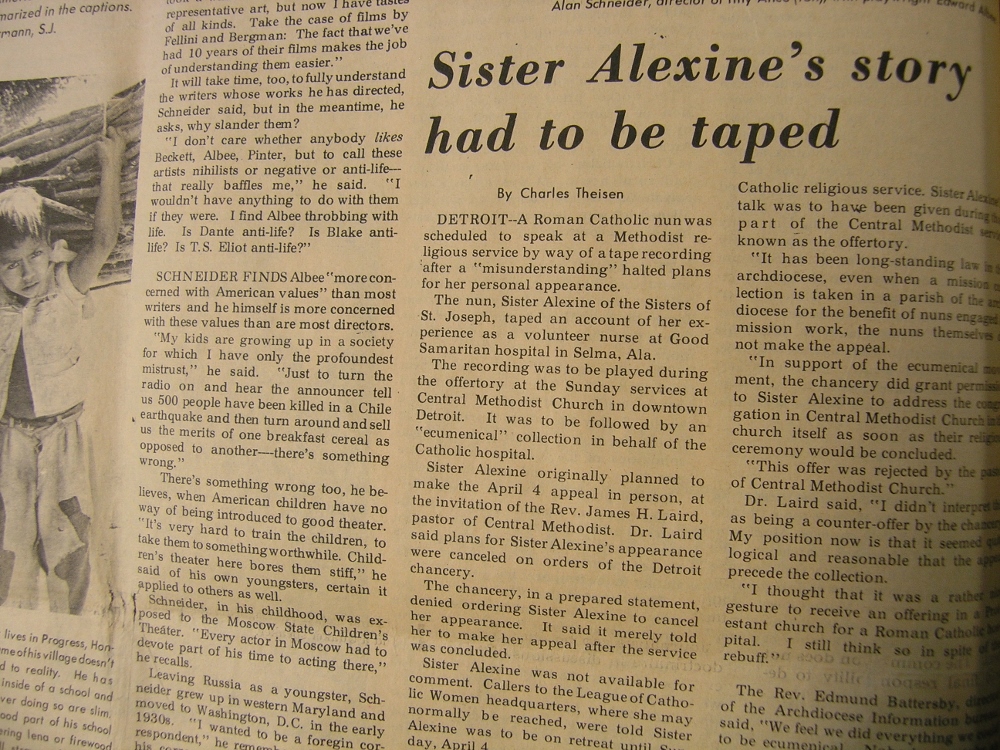