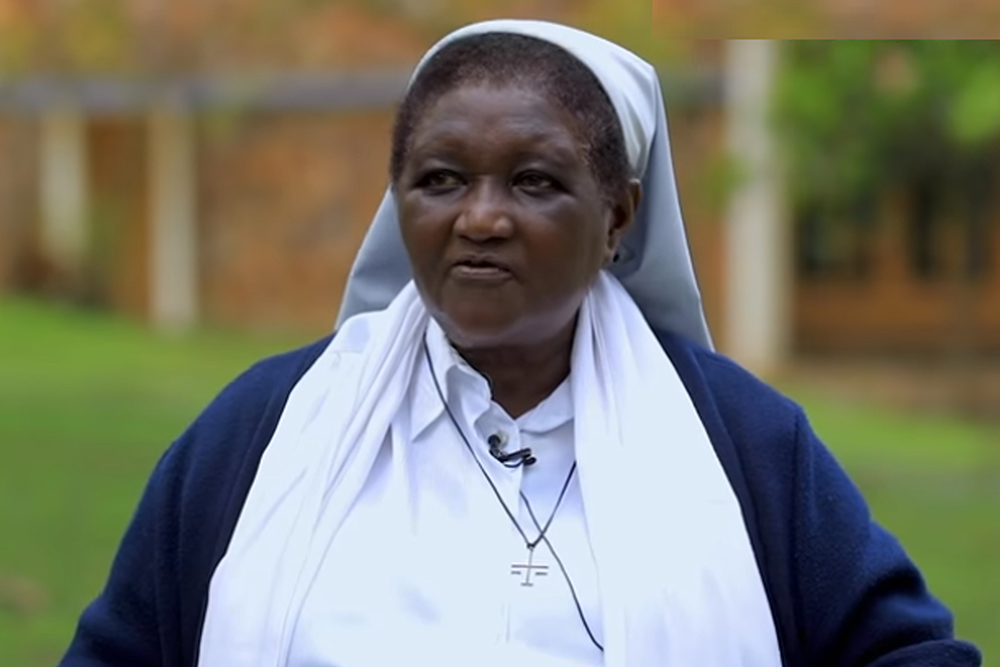 Sr. Helene Nayituriki, a retired headmistress of Lycée Notre Dame de Cîteaux, a secondary school in Kigali, is among the members of religious congregations who risked their lives to rescue members of the Tutsi ethnic group under threat in the 1994 genocide in Rwanda.

During this period of around 100 days, Nayituriki, a member of the Bernardine Sisters, saved more than 150 students, teachers, and people who lived near the school from militiamen who wanted to kill members of the Tutsi ethnic group. In 2007, she was honored with a national medal for her role in the fight against the genocide.

GSR: Could you share a little bit about your own experience during the genocide as someone who took an active role in protecting Tutsis sheltering at Lycée Notre Dame de Cîteaux?

Nayituriki: It all started when militiamen learned of my rescue efforts and established a plan to capture all of my charge. [Nayituriki was head teacher at Lycée Notre Dame de Cîteaux at the time.] Genocidal killings began nearby the following day, when soldiers, police and members of the militia started to execute key Tutsi and moderate Hutu military and political leaders. At the same time, the militiamen forced their way into the compound.

At the school, there were also some girl students [belonging to the Hutu ethnic group] who attempted to attack their colleagues [from the Tutsi ethnic group], and calm only returned after our intervention.

I told the students that we don't have ethnic groups at school, we have students; discrimination cannot be tolerated at all. In the meantime, I was trying to convince the security forces to protect the compound, and the school got four security officers.

On April 17, we managed to get [the 150 people onto] two trucks in order to escape killings. We were escorted by a few government soldiers, but armed roadblocks were everywhere. On our way toward eastern Rwanda, militias stopped our convoy and ordered the occupants on the trucks to separate into Tutsis and Hutus, but I objected and told them we were all students and teachers. We stayed in a neighboring secondary school there for 10 days until many of us came out of hiding after advancing rebels stopped the genocide.

Being a headmistress of a prominent secondary school such as Lycée Notre Dame de Cîteaux is not such an easy task, especially during different periods before and after genocide. For readers who are unfamiliar with the Rwandan genocide, what are some high-level details you think are important for them to know?

I assumed the role of headmistress in January 1997, but I have previously held different responsibilities in the same school, even before genocide.

First of all, genocide is not something that happens in a set way. In the aftermath of genocide, it wasn't an easy task because people's trust in each other has fallen. Many people were likely rising from ashes. I was determined to bring all of them to live together as God's creatures.

When schools resumed after the genocide against Tutsis, my objective was not only to educate children. My other focus was to restore hope among people, including my fellow teachers and our students. There were many people with a lot of psychological issues — things like anxiety and depression, which we had to deal with especially at school. I can say that people managed to come forward and step forward on this genocide thanks to all these efforts to inspire hope.

What spiritual resources or practices do you rely on to aid you, to keep you going in your work?

I am proud to be also an alumna of Lycée Notre Dame de Cîteaux, where I pursued my three years in junior and one year in senior secondary before joining the congregation of Bernardine Sisters in September 1979.

I was born in a Christian family. I had the desire to join a convent from my early years onward. My calling to become a nun was not because of the effects of poverty on my family or because I was not performing well in class, but it was my choice to serve God.

I am also passionate about education, and all my life as a member of religious communities, I have been driven by my strong belief that every child should have access to a high-quality education. But beyond that, there is another dimension of prayers and the difference they make as we live an active life outside the community, serving in educational institutions. We are dedicated to working toward helping humankind.

What have been some of your greatest weaknesses since you decided to join the Bernardine Sisters?

We all have weaknesses but rarely want to admit to them, but when looking back to the genocide in 1994, families were decimated, their homes and communities destroyed. The country descended into one of the most vicious and bloody massacres the world has ever seen. There were many courageous men and women who managed to overcome this horrible situation by joining us [to work through the consequences of genocide] despite deep feelings of sadness and sorrow for losing their loved ones or their properties being looted during this chaos. It was difficult to heal all these wounds of the past, but there are brave people who managed to overcome such hatred and horror.