They may have waited 35 long years, but the many thousands who packed Savior of the World Plaza for the beatification of Óscar Romero took joy in the moment – and in the memory of the slain archbishop.

Romero, who was martyred in 1980 as he said Mass in a hospital chapel near the start of El Salvador’s 12-year civil war, was beatified May 23. More than 250,000 people witnessed the ceremony, and spontaneous chants of “¡Viva Romero!” rang out through the crowd.

Franciscan Sr. Sulaigarita Vindas, who made the journey from Costa Rica for the ceremony, said she owes her vocation to Romero, who walked with the poor. “At first, it was accompanying the people, those who were suffering, through the war. . . . And one feels happy walking with them.”

Joy filled her face as she thought of Romero’s call to be a shepherd with his flock. “The people of Costa Rica love Romero! He’s the saint of the Americas!”

Mercy Sr. Ana María Pineda, who teaches a course on Romero and the Salvadoran martyrs at Santa Clara University in California, first met Romero in August 1979.

“I was moved to tears hearing how Romero had been added to the list of the martyrs,” said Pineda, who was born in El Salvador. “It was indescribably meaningful. Romero lived a life following the Gospel . . . for love of the poor and the most vulnerable.”

Pineda, who moved to the United States at the age of 2, has since done much research into Romero’s life. “His example has influenced me deeply, and I always knew that I would come to El Salvador if he ever were beatified. There was no question. The day I heard the news, I booked my flight.”

Cardinal Angelo Amato, head of the Vatican’s Congregation for the Causes of Saints, presided at the ceremony that puts Romero a step away from sainthood. “Blessed Romero is another brilliant star that belongs to the sanctity of the church of the Americas,” said Amato. “And, thanks be to God, there are many.”

While those who persecuted him have died or are in obscurity, “the memory of Romero continues to live in the poor and the marginalized,” Amato said.

He’s not a symbol of division, but of peace, Amato said.

In a message sent for the beatification, Pope Francis said Romero “built the peace with the power of love, gave testimony of the faith with his life.”

Proof of that is the shirt he died in, soaked in blood when an assassin’s single bullet took his life. At the beatification ceremony, eight deacons and priests carried the bloodstained shirt, now a relic, to the altar in a glass case. Others decorated it with flowers and candles during the Saturday ceremony. Several priests reached out to touch the case and later made the sign of the cross.

In a time of difficulty in El Salvador, Romero knew “how to guide, defend and protect his flock, remaining faithful to the Gospel and in communion with the whole church,” Francis said in his message.

“His ministry was distinguished by a particular attention to the poor and marginalized. And at the time of his death, while celebrating the holy sacrifice, love and reconciliation, he received the grace to be fully identified with the one who gave his life for his sheep.”

Many in attendance told GSR that Romero’s legacy of listening and acting continues, and how he continues to touch everyday lives.

“I go to church every week, says Luiz Fernando Presa, a resident of San Salvador. “When I was young, Romero was bishop in a very difficult time. The politics were terrible. He had the courage to denounce all the injustices at the time.”

One of the offertory gifts during the May 23 Mass was the book De la locura a la esperanza (From Madness to Hope), a document generated during the peace accords that ended civil war in 1992.

It chronicles some of the greatest atrocities committed in El Salvador during the conflict, including the killing and rape of four churchwomen from the U.S., the killing of priests and catechists, as well as massacres of unarmed civilians. More than 70,000 died in all.

Presa said he remains hopeful. “We have to learn how he wanted us to share . . . to help those in need . . . to be in solidarity.”

The Carmelite sisters who care for Romero’s home, now converted into a museum of his books, personal items and priestly garb, didn’t need a formal acknowledgement of Romero’s sainthood. They marked the front of the house with this greeting “Monseñor Romero, Prophet and Martyr.” After a Vatican official told them they couldn’t say that, there was an additional phrase added: “The poor call him without the official judgment of the church.”

Students and youth of the Salvadoran church played a major role during the beatification, in roles such as Communion ushers with large yellow umbrellas and as personal attendants in orange T-shirts.

Priests, bishops and cardinals wore some form of a red vestment, signifying martyrdom. Their stoles were emblazoned with Romero’s episcopal motto: “Sentir con la iglesia,” or “feel with the church,” also translated as “to think with the church.”

Beatification Mass volunteer Evony Gabriela Sánchez of San Salvador said that this historical event was “not just for the Catholic church, but for the entire country in general.”

She reflected on Romero’s contribution: “He fought against injustice. Now, his beatification is a way for his message of faith and hope and courage to continue to spread throughout the world. And that is what the world needs more than anything, that kind of courage to stand up to injustice.”

Though the wait has been long, the timing of the beatification is good, “especially for the youth,” said Fr. José Grigoli, an Italian Franciscan and parish priest at San Antonio de Padua Church in San Salvador.

“The youth haven’t lived through the war. They don’t know the experiences that people have suffered,” Grigoli said. “By beatifying him now, the youth can take interest and see who he is, and what happened. They can accept him or not, but at least they may seek to understand. I think this is the right time.”

Los Angeles began a sister-city relationship with San Salvador about 10 years ago. The largest number of Salvadorans living in any U.S. city live in Los Angeles’ 13th district, which is represented by City Councilmember Mitch O’Farrell, who attended the beatification.

“It was amazing,” O’Farrell told GSR. “This was an opportunity, an event of this magnitude to encourage peace and understanding across the world. Not just in the Catholic faith, but in general. In Los Angeles, we have such a huge population. We know there’s a history of violence in relation to Romero’s life, and we want to see that dissipate. An event like this that promotes peace and understanding will go a long way.”

O’Farrell confessed that he was taken aback by one part of the ceremony: When Romero’s relic was being taken toward the altar, a brilliant circular rainbow appeared around the sun.

“I have never seen a rainbow circling the sun in my entire life,” O’Farrell said. “That was a symbol that is not lost on anyone. It was a bit of a halo, and I think we were all blessed for it. It was beautiful.”

[Jocelyn A. Sideco is a Young Voices columnist who attended the beatification for NCR and Global Sisters Report. Contributing to this story was Rhina Guidos of Catholic News Service.] 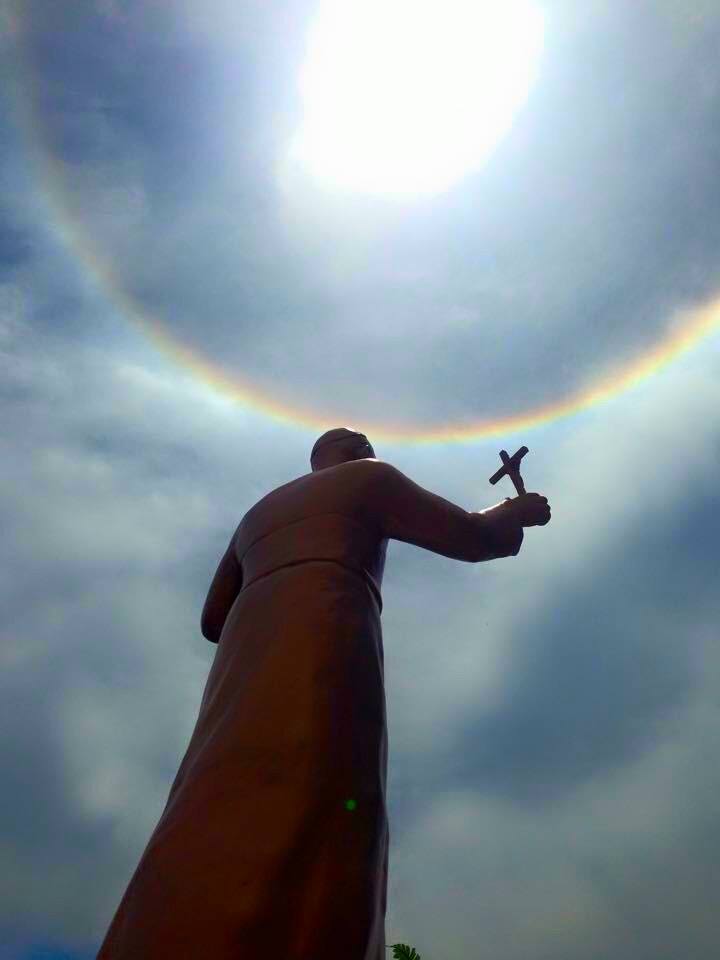 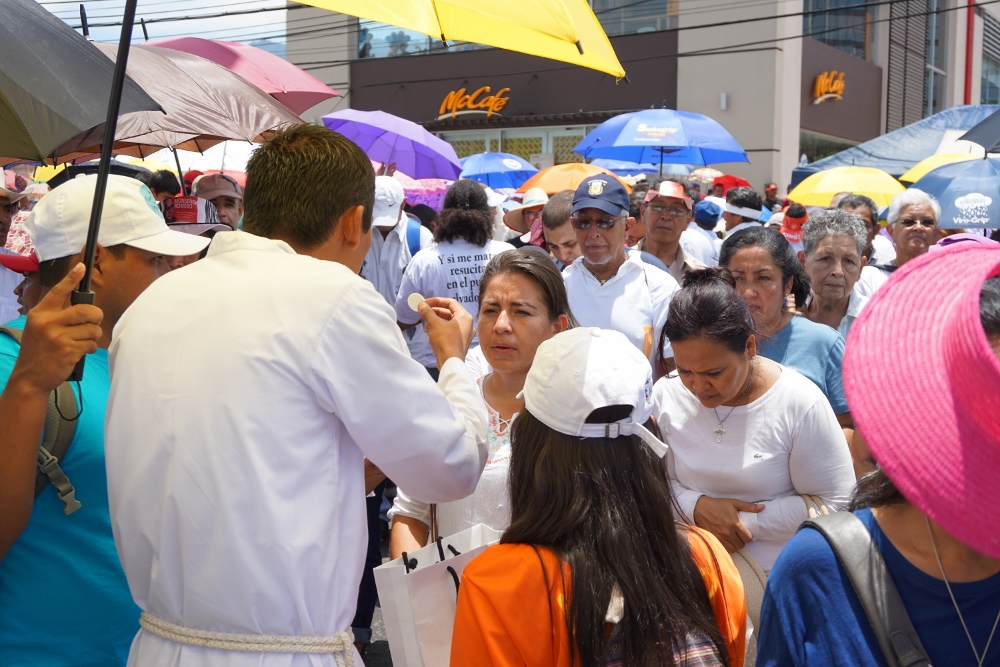 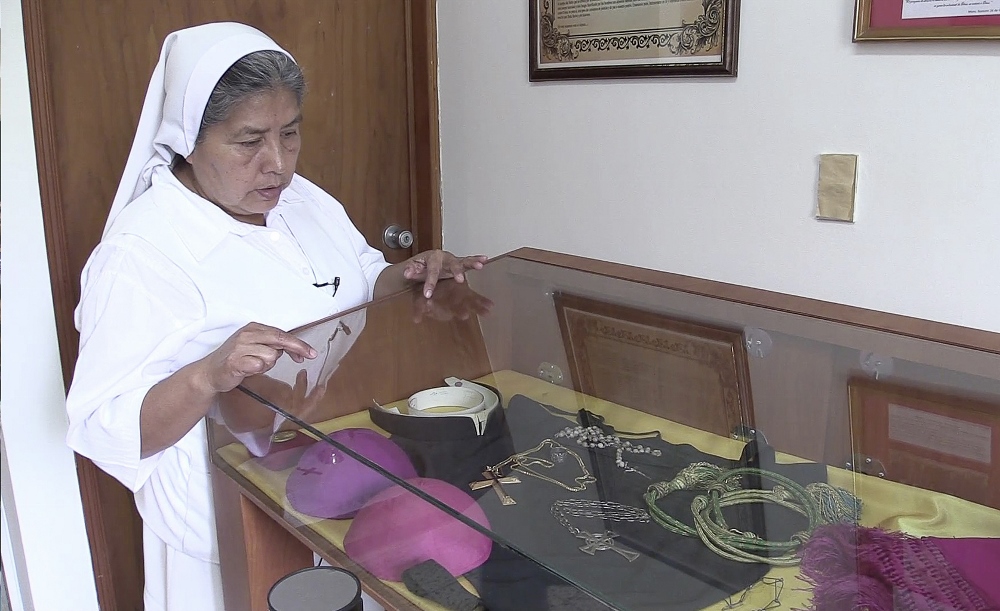 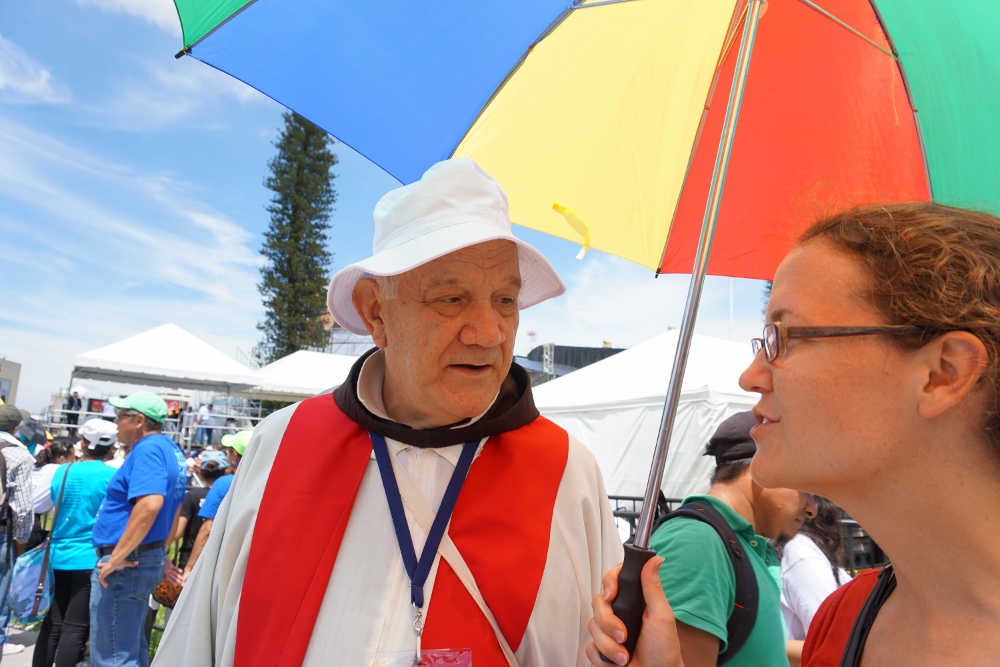 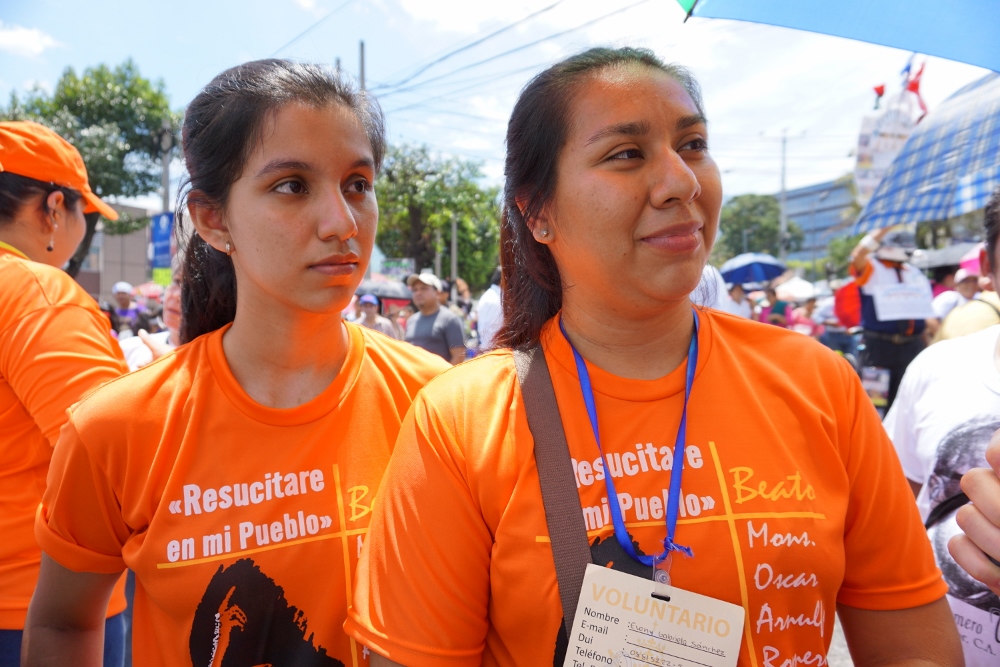 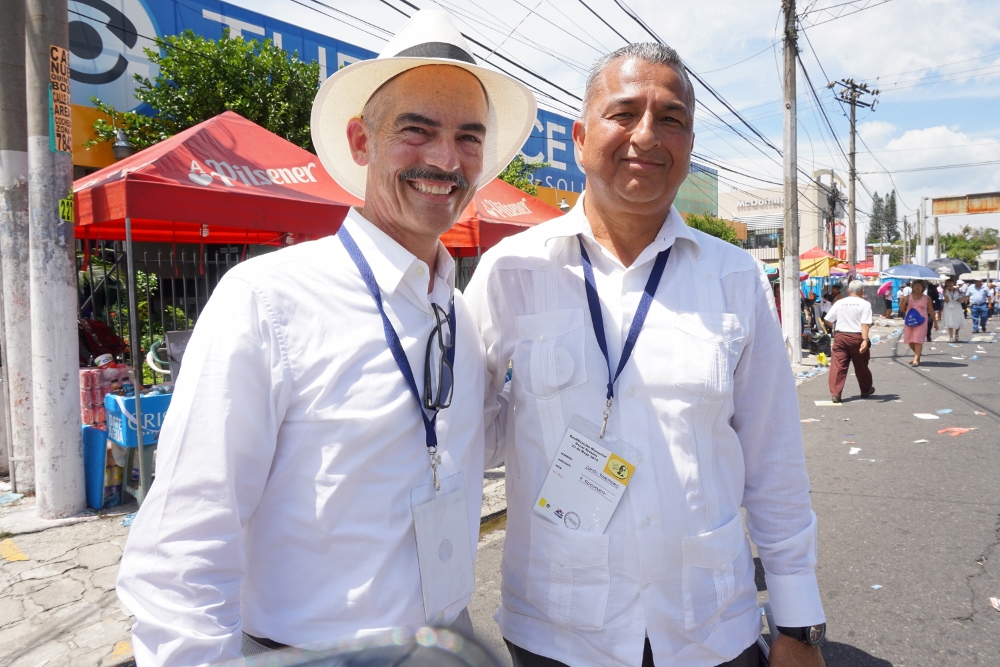 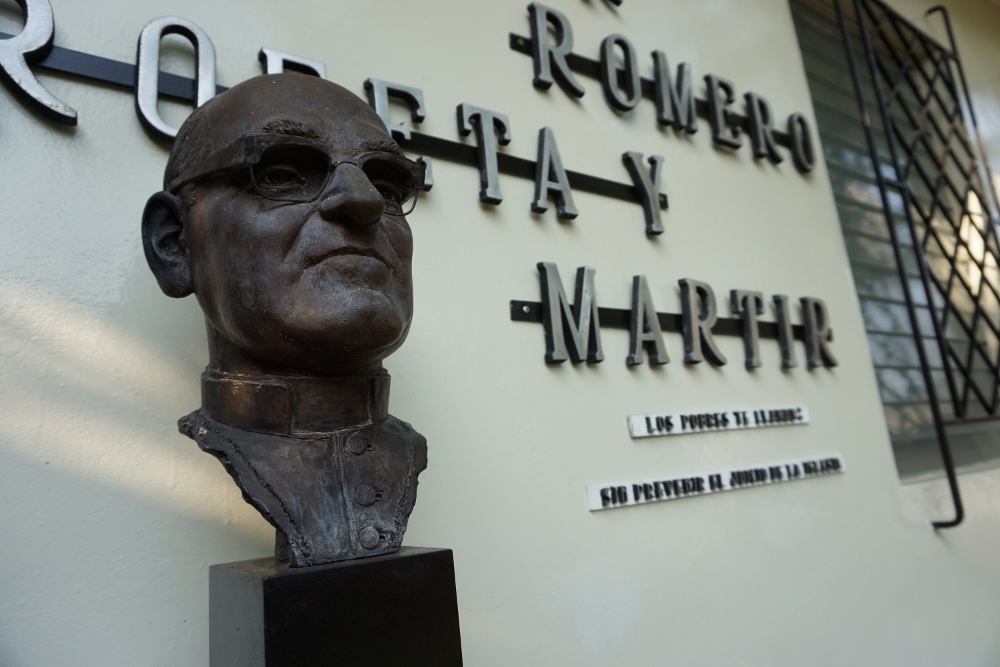 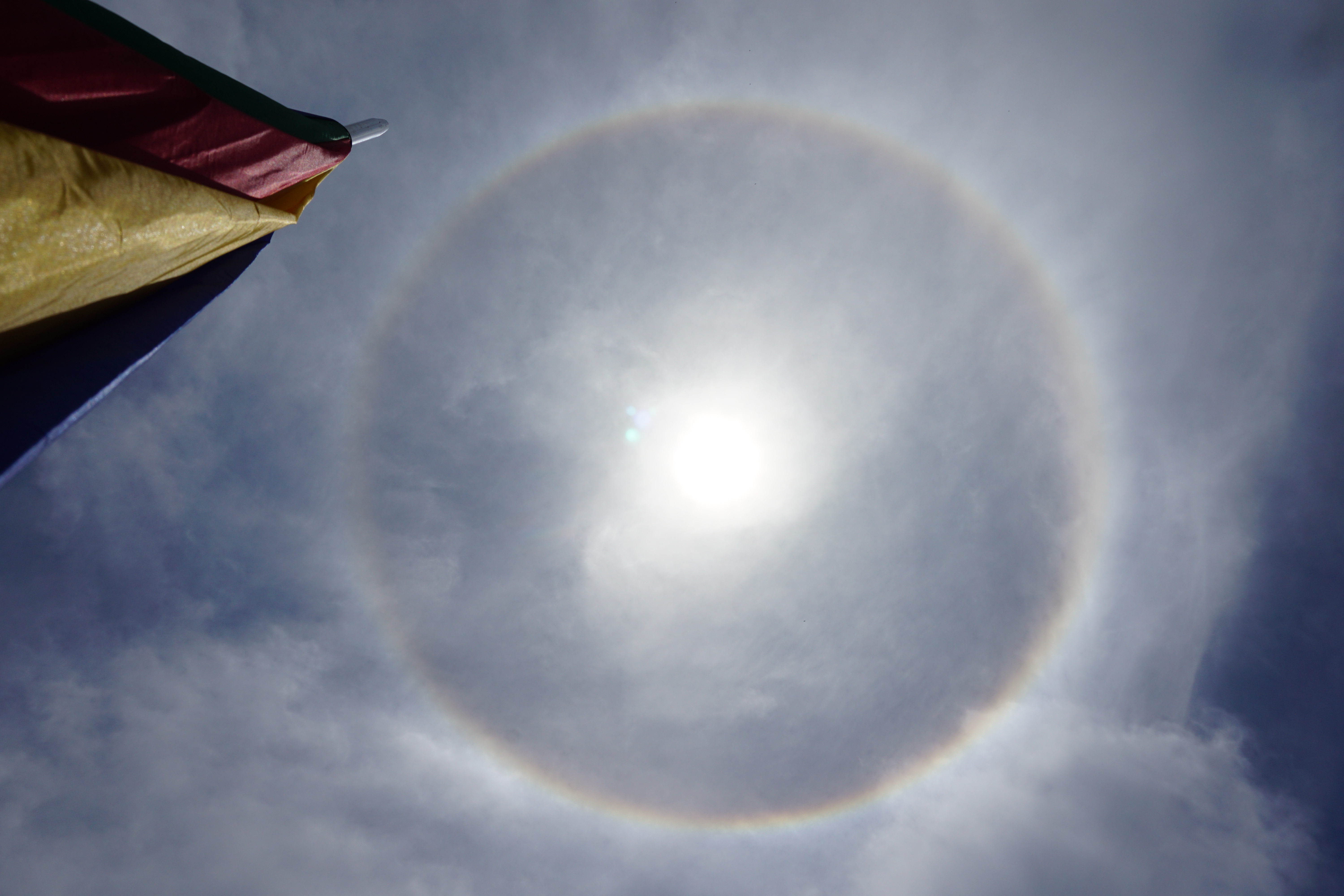