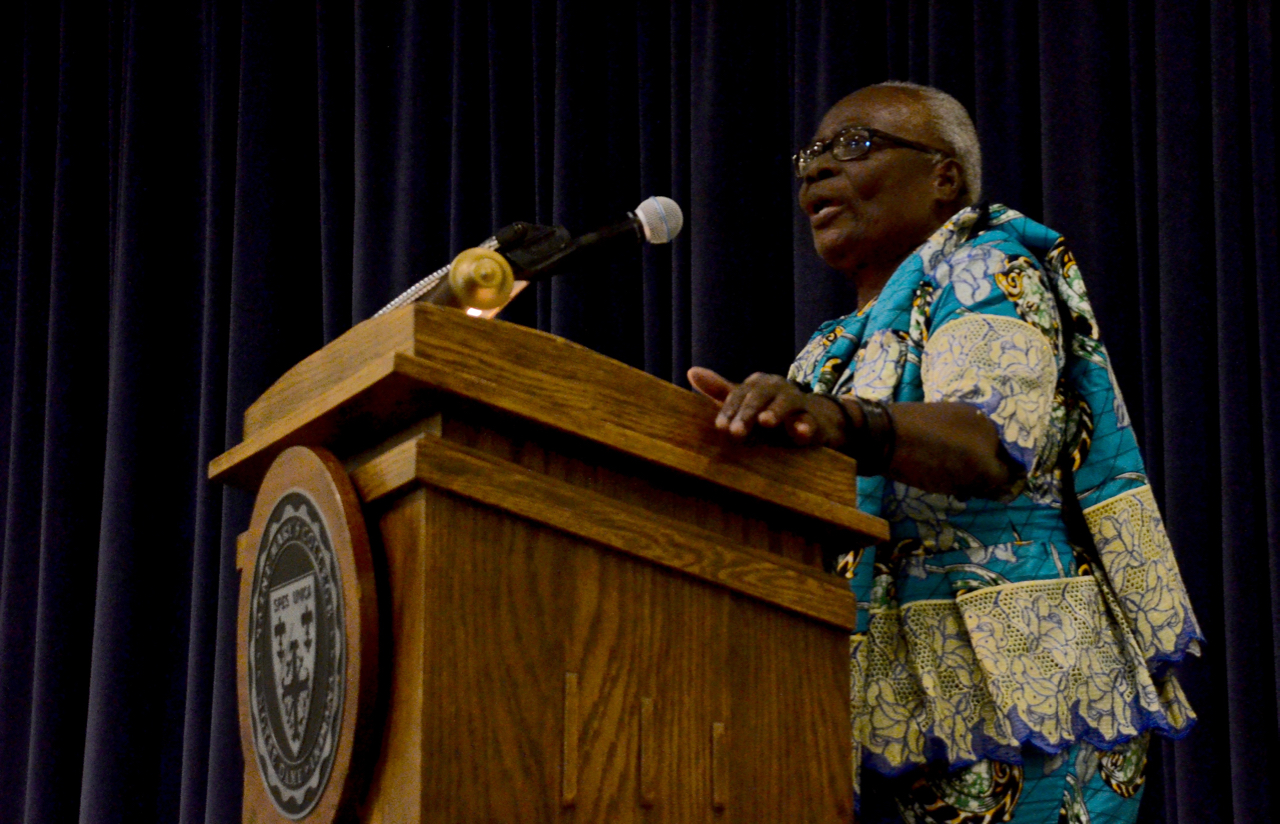 Mercy Amba Oduyoye offers the 33rd Madeleva lecture at St. Mary's College in Notre Dame, Indiana. She is the first person from outside the United States to give the lecture. (Dan Stockman)

South Bend, Indiana — Women in Africa want to heal their continent of its many afflictions, a prominent Ghanaian theologian says, but are beset by the cultural and religious practices that harm them and force them into the role of healer, even when they need healing themselves.

On April 19, Mercy Amba Oduyoye, the director of the Institute for Women in Religion and Culture at Trinity Theological Seminary in Ghana, delivered the 33rd Madeleva Lecture at St. Mary's College, founded by the Sisters of the Holy Cross, who have their international novitiate and motherhouse on the campus. Oduyoye is the first person from outside the United States to give the lecture.

Oduyoye's lecture, "Women in Africa: Spirituality, Health and Healing," explored the issues women face in Africa, where they are expected to be healers, but are also harmed by practices that reduce their humanity, such as a lack of education, keeping quiet about domestic abuse or HIV infection, and female genital mutilation.

"What women want to do in Africa is to cure Africa of the cultures and religions that are inimical to the health of women and have women running around to be the healers when they themselves are wounded," Oduyoye told the audience of about 150. "Genesis 3:20 says that woman is the mother of all living humans. This is what compels women to bring health to all who are under their care, sometimes at the expense of their own health."

Oduyoye is a renowned theologian, educator, writer and mentor and is recognized as the mother of African women's theologies. For decades, she worked to address issues of poverty, health care, youth empowerment, women's rights, destructive cultural and religious practices, and global unrest. She has been an influential leader in the ecumenical movement for more than 50 years, was the first female president of the Ecumenical Association of Third World Theologians and founded the Circle of Concerned African Women Theologians, an organization that encourages African women to research, write and publish their own books and articles on African issues and concerns.

Oduyoye has authored many articles and books, including Beads and Strands, Introducing African Women's Theology and Hearing and Knowing: Theological Reflections on Christianity in Africa. She holds bachelor's and master's degrees in theology from the University of Cambridge and has seven honorary degrees, including one from Yale.

Oduyoye began her talk by telling how, at the age of 17, she tried reading John Stuart Mill's 1869 book The Subjection of Women, which argues that the subordination of women is de facto slavery. She wasn't able to appreciate it at the time, but now sees it as a depressing landmark.

"Reading it now from my context as an African woman in the 20th century, I have said, 'How very little things have changed,' " she said. "I am confronted again and again with the subjection that Mill encountered in the 19th century."

Oduyoye said the Institute for Women in Religion and Culture, unlike the Circle of Concerned African Women Theologians, does not focus on publications, but has published a few works, including When Silence Is No Longer An Option and Too Painful to Tell. When she went to the publisher to check on the status of Too Painful to Tell, she found a young man weeping at the computer.

"He said, 'I can't type these things. It reminds me too much of what my mother went through,' " she said.

Domestic violence, marital rape, HIV and AIDS, female genital mutilation — all of it has been hidden by a tradition of privacy, Oduyoye said.

"African women were encouraged not to wash their dirty laundry in public," she said. "So the disease festered and became cancerous. The home became a hellhole for women."

That is compounded by traditions and practices that favor the liberation of men, such as the belief that men can be "ritually cleansed" of HIV and AIDS by having sex with widows or minors, Oduyoye said.

"We have actual examples of women who have been pushed into marriages where they knew there was AIDS possibility ... they contracted AIDS and died," she said. "But families preferred to go around and say 'Our daughter is married' than to say she is not, even if it means their daughter is dead."

Even today, Oduyoye said, there are reports of girls who are not allowed to go to school if they are menstruating because they have to cross a river that is taboo for them to touch during menses.

"So they cannot go to school," she said. "It makes no sense: There are women working in illegal mining in this same river, and I bet some of them are menstruating. But they're dealing with a man's money."

But these things are so ingrained, it is hard for women to break out of the mindset. When the Circle of Concerned African Women Theologians held a conference on women's health, the members giggled through the session on menopause, but were serious during talks about family and children's health, she said.

"That is the state of women's health: They are very concerned about men and children's health, but their own health is something to giggle about," Oduyoye said.

In recent years, all of these problems have been exacerbated by deliverance ministry, which says that when bad things happen to you, it is a spiritual problem. Women are sent to prayer camps, she said, where they are virtually enslaved as part of their "healing."

"They victimize these little girls," Oduyoye said. "The young women are suffering from that."

The "ministry" also reinforces the culture of subjugating women, she said.

"A lot of these 'ministries' are around barrenness, women who are finding it difficult to have children or difficult to find a husband," Oduyoye said. "They'll say she has to be delivered from that demon. But I know men who cannot find wives. Why are they not being 'delivered'?"

And there is still the practice of female genital mutilation, which, despite being illegal, is condoned and encouraged.

"Such indescribable cruelty. Such unpardonable cruelty," she said. "A trusting child is tortured into womanhood. Such calculated cruelty."

But the practice persists, Oduyoye said, because people believe sayings such as "A little pain now will save the pain later of a single life," and because men won't marry women who have not been tortured in this way.

Fighting these battles, Oduyoye said, is often like "fanning the face of the sun with a feather. But someone has to do it."

The annual Madeleva lecture is named for Holy Cross Sr. Madeleva Wolff, who served as president of St. Mary's College from 1934 to 1961 and who established the School of Sacred Theology in 1943, the first institution in the United States to provide graduate education in theology to women.

Last year's Madeleva Lecture was presented by Franciscan Sr. Ilia Delio. Next year's will be given by Nancy Pineda-Madrid of Boston College.

Making space for a come-to-Jesus moment