Daylight illuminates the monastery's long corridors, seeping through the old windows dotting its thick walls. The floor responds to the slightest step with an enveloping rustle, as today's Ursulines follow the footsteps of their predecessors. But this uninterrupted cycle that dates back to 17th-century New France is coming to an end.

In October, the majority of the 50 sisters who live in the monastery founded by St. Mary of the Incarnation will head to the Quebec borough of Beauport, where a new home for the elderly awaits them. For the first time in their lives, they will live with laypeople and members of another community, the Servants of the Holy Heart of Mary.

"If we want health care until the end, if we want to be safe, if we want to be freed from administration and management, it was necessary to think about leaving the house," said Sr. Cecile Dionne, superior general of the Ursulines of the Canadian Union.

For many Ursulines, it is an opportunity to make an introspective journey on their lives as nuns, on the gift of their lives to God. Contemplating the vast chapel of the monastery, Dionne and two sisters recall the joy they felt during religious celebrations and the beauty of the songs they sang together. Their lives have been marked by Ursulines since their youth.

Sr. Pauline Duchesne, chair of the board, became a boarder at the Ursulines when she was a teenager.

"It was like a new birth. This is the first time I say it like that, but it's really what I live. These sisters gave me love, confidence in me, made me see that I had abilities," she said, adding that she was fascinated by the joy that emanated from the sisters.

Sr. Celine Bergeron, superior of a local community inside the monastery, said the Ursulines have always formed a big family, an experience they worked to perpetuate through the centuries.

The high ceilings of the chapel give way to a more intimate space, site of the tomb of St. Mary of the Incarnation, who established the Ursulines in Quebec nearly four centuries ago. The three sisters say they thought a lot about her and prayed to the saint who left everything in France, including a son, to go on a mission in the New World.

"We're leaving to go die elsewhere: We go to meet a new way of living our mission, which has always been to be with people," said Dionne. "Maybe today, we are called to join our brothers and sisters who, like us, are facing the challenges of old age.

Bergeron stressed that leaving their monastery is "a new crossing in our Ursuline life."

"We do it together. We will lean on each other. We do not know the mission that lies ahead," she said. "We will have to discover that it will be our new community life in a new world."

Many maxims painted on wooden panels adorn the walls of the monastery. The three nuns, who have been walking these places for decades, know them by heart. Here and there, some older sisters walk slowly and greet each other with a broad smile. The place has no luxury, yet it has always been full of life.

Dionne thought their monastery would be the last of the few Ursuline houses in the province that they would leave. It's rather the first.

"I would never have thought that I would ask our sisters of the monastery first and that I, who was one of their students, would find myself in a room in front of my old provincials and old generals to ask them that. It's not easy. Not easy. I prayed a lot," she said.

This departure is the consequence of a lack of religious vocations. The oldest of the Ursulines in the monastery is 102 years old. Their average age is 88.

The three sisters, however, believe that their values will be carried on. The monastery will be used as a museum, cultural center, the Marie-de-l'Incarnation Center -- all places and initiatives that will keep alive this memory, this ideal. But it is difficult to predict how their presence will be felt in a generation or two.

"The life we have known, and in which we have been happy, I do not think we will pass this on to someone. It's gone now," said Dionne. "But the heart of what has been our life, it will not die. How is it going to emerge, what shape will it have? I call this the unexpected, the hitherto unseen of the continuation of our history, which will not die there. ... There is something that will spring from the eternal life of consecrated life."

From the schoolyard, where the Ursulines taught generations of youth, resound the joyful cries of children. The school will stay there, managed mostly by laypeople.

But it is in passing by windows overlooking the schoolyard from which resound the cries of joyful children at the end of classes that the sisters seem most moved.

Smiling, the three sisters accompany the journalist to the front door. This same door they're crossing as they move toward a new life. For Dionne, there's no doubt: "If Mary of the Incarnation were here today, she would be the first to head out." 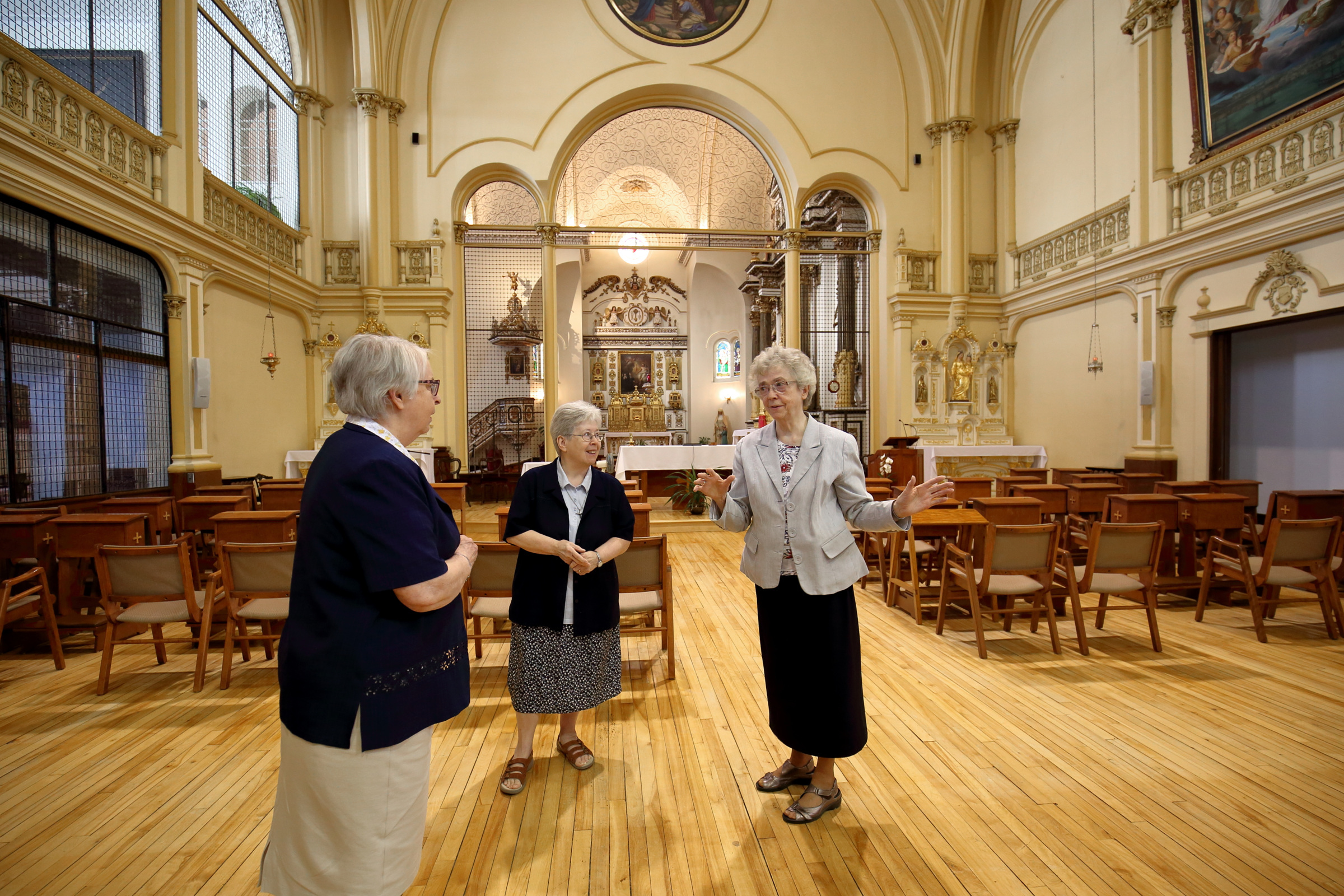