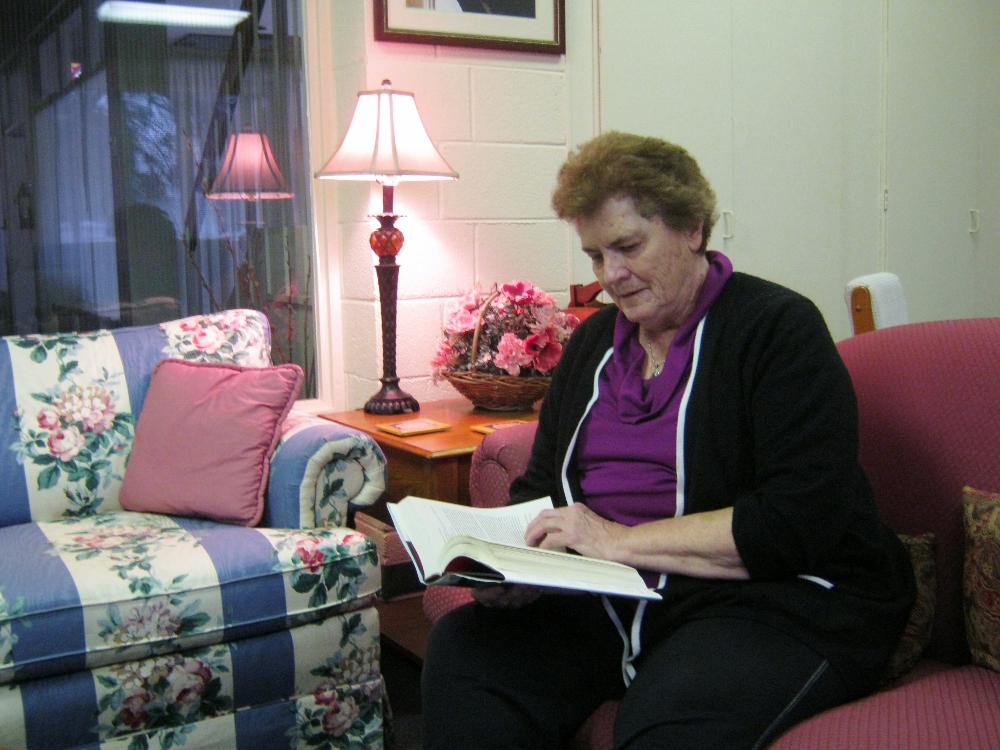 Sr. Bernadette Teasdale reads in the lobby of the Center for Contemplative Living. (Kathy Coffey)

Denver, Colorado — It all began when Fr. Ed Hayes asked Sr. Bernadette Teasdale, “Do you ever shut up?” He then taught the highly extroverted nun how to do centering prayer. More than 30 years later, the unique center she began “from a closet in a parish” in Denver serves over 4,000 people, supported by 90 staff volunteers.

Its lobby, filled with cozy chairs, is warm and inviting. A coffee pot is always on. The spacious center can house 50 for weekend retreats, 180 in the chapel and many more in classrooms, where more than 1,200 people a year study the work of Trappist Fr. Thomas Keating.

Now age 91, Keating, author of Open Mind, Open Heart and other spirituality classics, lives a few hours away at the monastery in Snowmass, Colo. He retired there in 1980 after 20 years as abbot at St. Joseph’s monastery in Spencer, Mass. There, he, Basil Pennington and William Meninger, concerned by the number of young people flocking to Eastern mysticism, worked to restore the ancient Christian practice of contemplation.

Contemplative Outreach, LTD, was created in 1984 to support the growing spiritual network of Centering Prayer practitioners.

The form of centering prayer they distilled was a point of unity with other traditions and for dialogue with world religions. Always ecumenical, Keating had been working with the Episcopal church of Colorado for 10 years when then-Archbishop James Francis Stafford asked, “Why don’t you do something for us?” Keating replied, “Why don’t you invite me?”

What followed was a remarkable collaboration. Since Keating could come to Denver only three or four times a year, Stafford asked Teasdale to build up contemplative outreach. She agreed, on one condition: a place to house the effort.

Having worked three and a half years with a spiritual renewal program, traveling to 132 parishes, transporting books, settings, supplies and snacks, she was tired of “floating.” She had also learned that “six classes are about all people can stomach,” so on the same principle, she began with short, profound ones like “Spiritual Journey” – to educate and empower the laity.

After five years at Spirit of Christ parish, Teasdale moved the group to buildings owned by the Episcopal diocese. She was the only paid staff; the rest were volunteers. How to retain them?

“I love to cook,” Teasdale said, smiling. “I come from a wild Irish family filled with good food and fun, and am known for my margaritas. People have had healthier food than mine, but my mother’s chili has become famous.”

At countless potlucks in church basements, people would learn the centering process: twice a day for 20 minutes, sitting in silence, losing themselves in what Keating calls the “boundless delight that flowers through the Trinitarian relationship.

In practice, the idea is to commit to interrupting thoughts rooted in self-preoccupation, turning instead to a sacred word. Teasdale’s participants also learn lectio divina (sacred, slow reading of Scripture), the Welcoming Prayer and Forgiveness Prayer.

Keating says that a limited creature is “apparently unequipped for the hazards and trials of this life, but can go through them with invincible confidence in God’s love.” If that creature takes quiet time to pause, the result is sensing God’s presence and action. Or as one gentleman said, “We sit. God heals.”

What might seem theoretical is firmly anchored at the Center for Contemplative Living, which keeps everyone together and organized. People find there not only fine snacks, but a praying community, spiritual direction, “soul friending.” For example, Teasdale described a class called “The Gift of Life,” where 50 people consider the mystery of death:

“In our culture, no one talks about dying. We have Keating’s tapes, a period of silence and small group discussion where people can speak about what grace helped them through loss,” she explained. “Though they might be in pain, something deeper is going on. God is releasing energy in them. For many people, this is their only experience of church.”

When Teasdale describes her own role in developing the center, a favorite phrase is “bubbling up.” As a Sister of Charity of Leavenworth, she knew when she’d “had it” after 10 years of teaching and doing development work at their St. Mary’s College, Kansas.

So off to Weston Theology School in Boston she went, for another master’s degree, this time in Theological Studies.

“We had master teachers there for renewal and updating. For the first time, women stood in the pulpit,” she said. “And who but a nun would have the time and the background I then brought to developing the center? I realized how graced I was when I brought a loaf of bread to a friend with nine children on a rainy day. She said, ‘you’re lucky to have time to pray!’”

Teasdale has made that possible for thousands, and when asked about her greatest achievement says, “I’ve built a home for a spiritual family to grow and develop, to live the Gospel.” One might add that she’s feminized and softened Trappist austerity.

Denver’s center is affiliated with the national Contemplative Outreach organization, which reaches over 40,000 people in 39 countries, and Bernadette has served on its board. What differentiates her center is its consistent curriculum – nine months of the year – and its independence of other church structures. It has hassle-free, online registration, and of course is near Snowmass. Its annual conference draws speakers like Fr. Martin Laird, Abbot Joseph Boyle and Cynthia Bourgeault.

Teasdale’s retirement two years ago was skillfully orchestrated to keep the center growing. With a $50,000 grant from a family foundation, she brought in a transitional team who, with staff volunteers, explored models of leadership and developed job descriptions.

Gradually, they came to take ownership. It took two to fill her shoes: a coordinator of programs and an administrator. On a modified schedule, Teasdale continues to teach – and cook. She concludes: “When I look back, it’s the work of God. Nothing I planned!”

[Kathy Coffey is the author of several books about prayer, as well as catechetical resources and numerous articles in Catholic periodicals including National Catholic Reporter. She gives national workshops, retreats and conference speeches and taught for 15 years at the University of Colorado, Denver, and at Regis Jesuit University. Her website is http://kathyjcoffey.wordpress.com/.]

Nuns on the Bus - Tour extended to election day

We can do better than this

A train of thought

We each have a purpose, but we can't get there on our own

Viriditas: A key to discernment on the future of religious life