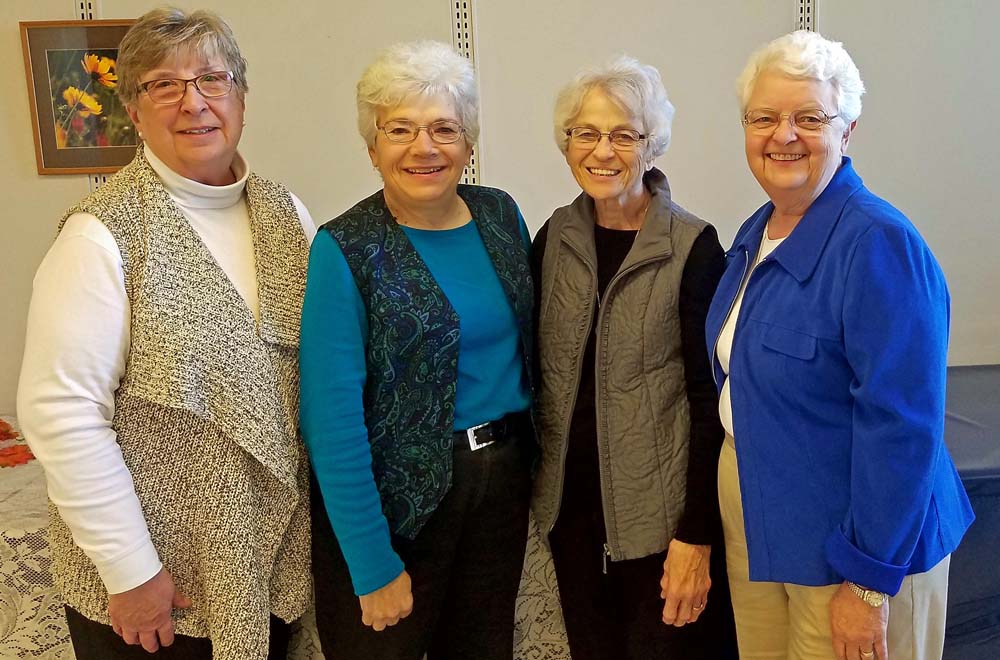 Atchison, Kansas — When Shana Puckett walked into the Sophia Center for the first time, she saw the words "Wisdom hath built herself a house" on a sign overhead.

"My whole spirit leapt," said Puckett, a nondenominational Christian from Kansas City. "From that first day when I walked in and looked up and saw those words, I thought, 'This is home.' "

Puckett is a 2015 graduate of the Souljourners program sponsored by the Sophia Center, a ministry of the Benedictine Sisters at Mount St. Scholastica in Atchison, about 40 miles northwest of Kansas City and a few miles south of Benedictine College. 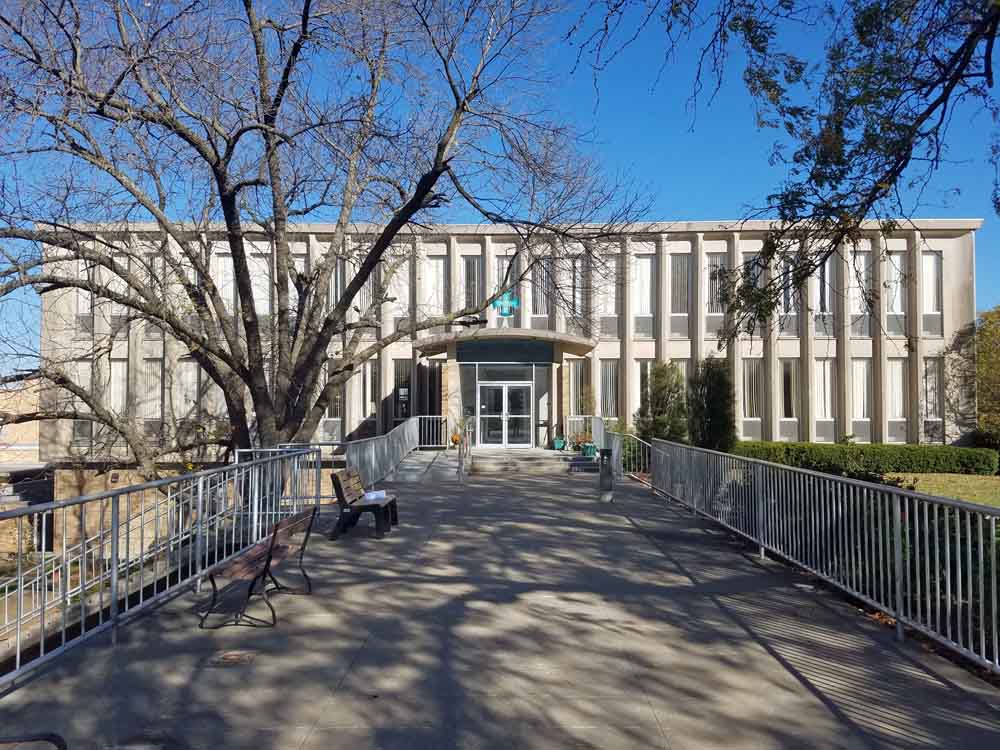 Souljourners, an ecumenical three-year program for spiritual directors, begins with a weeklong summer residency at the Sophia Center, where students are introduced to spiritual direction. This is followed by two years of meeting one weekend every month from September to April, with a second residency following the first year.

The first year, the students study different forms of spirituality, from early Christian and medieval to Celtic and creation spirituality. The second year, they are taught different skills and lessons in spiritual direction. These two years need not be taken in sequence.

"Each weekend is focused on something that [students] need to know," Sr. Carol Ann Petersen, director of the Sophia Center, told GSR. "It's very holistic. Spirituality, personal growth, addiction, anything a spiritual director might encounter."

Students are instructed by experts in the topics covered; instructors come from all Christian faith backgrounds: Catholics, Mennonites, Lutherans, and even a Quaker have taught Souljourners students. The lessons are interspersed with community meals, prayer and small group discussions of the weekend's topic.

The third year is a year of practicum, during which students begin ministering to others in their own communities, meeting with Souljourners staff for guidance. A directed retreat at the beginning of the year and four practicum weekends supplement the supervision before graduation.

Souljourners has its roots in the mid-1990s, when Episcopal Bishop William Smalley of Kansas, had the idea to begin an ecumenical spiritual formation program in Kansas. After gathering a team of interested Episcopalians, he approached Sr. Johnette Putnam, then director of the Sophia Center, about hosting the new project there.

"They were interested in a residential program," said Sr. Micaela Randoph, co-director of Souljourners, "and we have the capabilities to keep people overnight, over the weekend." 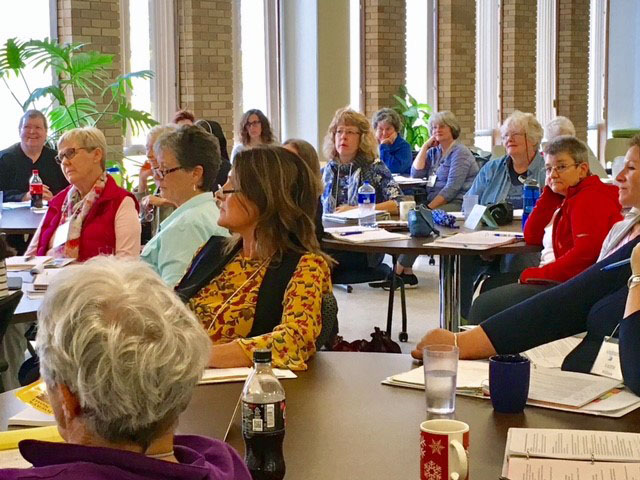 After a few years of spreading the word about the new program at churches in the area, Souljourners launched in 1998 with the support of several different local churches and denominations.

"From the very beginning, it's been ecumenical," Petersen said. "From the planning stages all the way through."

Every month from January through August, the Sophia Center hosts "inquiry sessions" for Souljourners at which prospective students "can come for two hours, and we go through everything. They got a tour of the monastery, they get a tour of [the Sophia Center], so they have a real feel for what they're getting into and if they want to sign up," said Sr. Mary Elizabeth Schweiger, the other co-director of Sophia Center.

Those who wish to apply must submit their spiritual biography and recommendations and have an interview with a staff member. Thirty-eight people are currently in the program, and it has produced 150 graduates.

The sisters describe the form of direction they teach as "contemplative-evocative."

"We train people to journey with another person in their journey toward God," Schweiger said. "It's not like we're telling them what to do or 'this is a rule you should follow' ... we try to evoke from the person where they are with God, what's happening in their relationship with God, what they want to deal with, in a very contemplative manner."

"The contemplative approach is going, 'What is happening now in this moment? God is here, with and among us, and what is God's invitation for us?' " Puckett said, "We can allow God to companion us as we're in [the moment] without needing to change, analyze or fix."

"We call it evocative in that it's not that the director has wisdom to impart to the directee or teaches them what to do, but rather, we're listening together, and it's through the Spirit's prompting and what the directee experiences himself or herself that the insight comes," said Renee Bhatia, a Catholic from Overland Park, Kansas, another Souljourners graduate. "So it's different from an approach that would cast the spiritual director as a 'wise guide,' a sort of guru who knows the wise words to say. It's much more focused on listening. It's a place where someone can hear themselves and hear themselves reflected back." 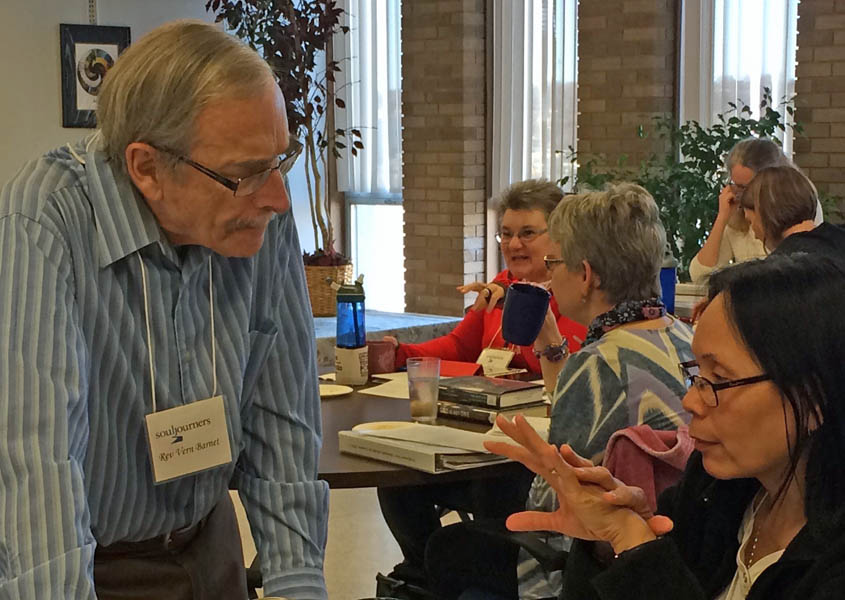 A Souljourner student speaks to that day's presenter. (Provided photo)

Both Puckett and Bhatia have since returned to Souljourners as "adjuncts," assisting the primary staff at the Sophia Center in continuing the program.

Souljourners draws new students from all over Kansas, Missouri, Iowa and Nebraska, but some have come from even farther.

"We've even had people that fly in from Georgia after starting the program and Washington, D.C.," Randolph said. Another student flies in from North Dakota. One drives seven hours each way from Minnesota every month.

Some join the program because their churches found a need for more spiritual direction, but the program is open to all who feel the call to deepen their relationship with God and help others do the same, the sisters say.

Graduates go in many different directions after the program. Some are pastors or clergy and use their new training to accompany members of their congregation. Others find that their training proves useful as educators, counselors or volunteers.

Ultimately, it is the spirit of welcoming and accepting others for who they are that is at the heart of what makes Souljourners and the method it teaches so successful, the graduates say.

"One half of the program that makes it so rich is the ecumenical half, and the other half is the Benedictine community," Bhatia said. "And being a part of that, that hospitality, the tradition, the stability and the wisdom of that community, that's certainly been my experience."

Puckett added, "It's very Benedictine to welcome all as Christ; that has totally been my experience there ... and to learn the charism to welcome others as Christ."

"Work in the sphere of ecumenism comes naturally to us as Benedictines," Petersen said. "Our order, dating back to the fifth century, predated the Reformation. And all faiths tend to find an easy comfort with our spirituality.

"We are proud of Souljourners because it is ecumenical and welcomes a very diverse group of people. They bless us with their presence and participation, and we hope they receive many blessings from us."

A season full of gratitude (all the Thanksgivings)

Nature my chapel, poems my psalms

'What did you learn from the coronavirus pandemic?'