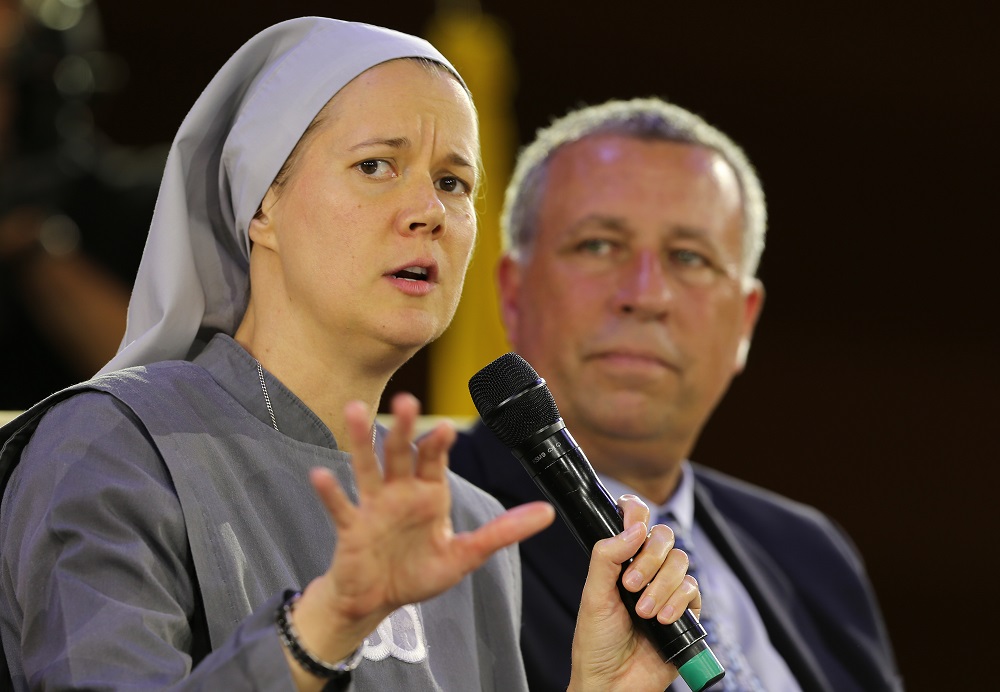 Sr. Miriam James Heidland, a member of the Society of Our Lady of the Most Holy Trinity, gestures while speaking on a panel during the "Convocation of Catholic Leaders: The Joy of the Gospel in America" July 2 in Orlando, Fla. Leaders from dioceses and various Catholic organizations are gathering for the July 1-4 convocation. (CNS/Bob Roller)

Baltimore, Maryland — If pastoral leaders want to be "prophetic disciples" who call others into a closer relationship with Christ, they must first experience Christ's presence in their own lives, Sr. Miriam James Heidland told more than 1,000 attendees of the Mid-Atlantic Congress Feb. 15 in Baltimore.

That means thinking deeply about where they have been, where they are going and where they are now, said the missionary, who is a member of the Society of Our Lady of the Most Holy Trinity.

Speaking in a keynote address, Heidland challenged listeners to reflect not only on the joyful moments of their life stories, but also on the sorrowful ones they may keep hidden.

The only way forward as Christians, she said, is "to allow Christ to come in and encounter us."

Heidland knows the power of encounter.

A former student-athlete who played volleyball on a scholarship at the University of Nevada-Reno, the popular Catholic podcaster described her 21-year-old self as a "hot train wreck of a mess."

A child victim of sexual assault and rape, the future missionary was an alcoholic who suffered clinical depression and worried that God couldn't love her. A priest of the Society of Our Lady of the Most Holy Trinity helped change her perceptions.

"That man just mentored me and loved me and he told me the truth, whether I wanted to hear it or not," Heidland remembered.

The priest helped the future nun change her life not only by what he said, but by how he lived his life.

"I looked at him and I could not deny the existence of God because it radiated from him," she said. "I remember being 21 and saying, 'Father, I don't know what's happening here, you're just radiant. I don't know what that is, but I want that.'"

The other person who helped transform Heidland's life was her mother. The nun remembered that her mother, frustrated by how out of control her daughter's life had become, decided to give her daughter over to Mary. Unknown to Heidland, her mother fasted and prayed that her daughter would become a nun.

"So, watch out," Heidland said, drawing laughter and sustained applause as she gestured to the long, flowing gray religious habit she has worn for 20 years.

Heidland emphasized that Christianity is "not reform school."

"Jesus Christ did not come and suffer and die for us so that we be good little girls and boys," she said. "He came that we might have life and have it to the full and that our life would be completely transformed unto glory."

Christ comes into the dead places, she said, to bring life and unite hearts to his "so that we speak and embody who he truly is on earth." In opening hearts to Christ, she said, pastoral leaders can become "compelling witnesses" of the faith.

Heidland invited attendees to experience Christ's healing in the sacrament of reconciliation at the congress, whether they last received the sacrament a week ago or three decades ago.

"As disciples," she said, "if our lives are not resting on a deep intimacy with Jesus Christ, I have no idea what we're doing – and I'm saying this as much for myself as you."

The Mid-Atlantic Congress, an annual gathering of pastoral leaders, was held Feb. 14-16.

[George P. Matysek is digital editor for the Archdiocese of Baltimore.]

Spirituality | Speaker: Only way forward is to allow Christ 'to come in, encounter us'

Being loved into existence