Many Catholics have never heard of spiritual direction, a practice of spiritual guidance that helps believers see God working in their lives. The practice, which has its roots in early Christianity, has its greatest support today from women religious and their communities.

"I certainly had spiritual direction during most of my religious life, and it has been positive," said Sr. Rose Ann Hefner, a member of the Congregation of St. Joseph. Hefner is a licensed professional counselor and social worker on staff at the Kanawha Pastoral Counseling Center in Charleston, West Virginia.

• Who is God?
• What does God want from me?
• How should I live my life?
• Where will I find happiness?
• If God loves us, why does he allow suffering?

Spiritual direction, Hefner points out, is not the same as counseling, which she also does professionally. "I like to call it 'spiritual accompaniment' rather than 'direction.' It doesn't mean telling someone what to do."

Other sisters who are spiritual directors agree.

"Even though we call it spiritual direction, I'm not giving you direction," said St. Joseph Sr. Mary Lynch, a women's hall rector at the University of Notre Dame and the coordinator for Silent Directed Retreats through Notre Dame's Office of Campus Ministry.

Lynch said she primarily finds herself ministering to faculty and staff who come to her through word-of-mouth recommendations. Students, she said, are seldom in the right space for direction. The exception is seniors, who sometimes seek help in discerning their vocation.

For those who do come for direction, Lynch makes her role clear.

"I'm not helping to direct your life," she tells them. "I'm helping you to discern which direction you think you should be moving. I'm here to listen. The person must be someone who prays, or we have nothing to talk about."

Both Hefner and Lynch agree that the listening that directors do has many levels. Spiritual directors understand that they must be careful in assessing the real needs of those who come for direction. Formal educational training in spirituality and spiritual direction as well as a lengthy practicum — a supervised training period — are essential for the directors and those who come to them.

"If people are in emotional crisis or have a very particular need or problem, they usually need pastoral counseling or therapy in a clinical setting," Hefner said. Spiritual direction, on the other hand, is intended for "those who want to go deeper in their relationship with God or have spiritual issues." Hefner said sometimes people seek direction because they don't want to admit they need therapy.

Mercy Sr. Janet K. Ruffing, a professor in the practice of spirituality and ministerial leadership at Yale Divinity School, said spiritual direction is not meant to replace the Catholic sacrament of reconciliation (confession).

Before the Second Vatican Council (1962-65), she said, "there were some gifted spiritual directors, but spiritual direction mostly functioned under the rubrics of confession."

Laypeople then had access to spiritual direction primarily through the sacrament of reconciliation. But it focused only on areas of sin and how to confront them. Rarely did confessional conversations openly address the broader faith questions that spiritual direction welcomes.

After Vatican II, ancient doors slowly swung open, Ruffing said. The council had proclaimed a universal call to holiness for all, including the laity. To help move the church forward, religious communities were asked to re-examine and renew original charisms, the ministries for which they'd been founded.

Fr. Pedro Arrupe, then superior general of the Jesuits, asked the Jesuits to retrieve and modernize the Spiritual Exercises developed by their 16th-century founder, St. Ignatius of Loyola. Variations of Ignatius' original 30-day retreat were developed and piloted in the 1960s and '70s. They spread like wildfire throughout religious communities of the church, especially those in the United States. Many nuns were trained to give individually directed retreats.

Those spiritual exercises were meditations on Scripture passages as well as prayers, reflections and contemplative practices. The spiritual director presented them day by day to the person on retreat.

Ruffing said she is still amazed by how this practice was successfully adapted for use in modern times.

"That made it so much more available to laypeople," she said. "People don't have to take a week off work to make a retreat."

Successful adaptations of the original 30-day retreat are mainstays today. The "Busy Student Retreat" is often offered in the fall on college campuses, running Sunday through Thursday. Students who sign up commit to 30 minutes of daily personal prayer. They also meet with a spiritual director each day and agree to participate in at least one worship service. A similar format works for parishes.

The "Retreat in Everyday Life," another example of a modern spiritual retreat, "is the Spiritual Exercises of St. Ignatius done over the course of 30 weeks instead of 30 days," Lynch said. The director meets with the person once a week in that timespan, offering readings and Scripture passages for prayerful reflection.

"It's a lot of commitment," Lynch said.

Spiritual direction began to be offered to the laity through individual direction and through group retreats at retreat houses. After Vatican II, many women religious orders built retreat houses at scenic locations to invite and inspire people to pray.

"Since I entered, we've had a retreat house here," said Sr. Kathleen Donnelly of the Society of St. Ursula, a spiritual director and staff member at Linwood Spiritual Center, her order's retreat center that overlooks the Hudson River in Rhinebeck, New York.

When people come to the center for individually directed retreats, she often suggests they take Bibles or spiritual reading outside to a bench. She knows Linwood's vistas can help them pray.

"I tell them, 'Just go out and sit. The river is tidal, so it flows both ways,"' she said.

"Our staple is an Ignatian retreat," Donnelly continued. "It's the week-long version of the 30-day retreat. We also do the 20-day retreat if someone asks for it. We do all things Ignatian. . . . It just lends itself to prayer and quiet. I mean, you can just feel people praying . . . but nobody is saying a word."

"Some of the folks coming to us right now are in transition," she said. "They've been downsized at their job and are facing early retirement. Many women religious are making a transition from very busy apostolic positions and are wondering, 'What can I do now?' And we have a lot of folks who come, just wanting a day of respite or two."

Women often come when their children are grown and they feel lost. Those caring for elderly parents also come for support and to find their bearings. Young people considering religious vocations come. Some spiritual directors say even evangelical Protestants are now coming because they have discovered the need for an interior life of prayer.

In the Galveston-Houston archdiocese, Sr. Mary Guido of the Congregation of Our Lady of the Retreat in the Cenacle finds that spiritual direction can also serve as a bridge for alienated Catholics or even for "nones," people with no religious affiliation. Guido, a native New Yorker, is a spiritual director and ministry director for the Cenacle Retreat House her order built in 1967 in Houston.

"We can be a kind of an entryway back in to church," she said.

Guido and six other Cenacle sisters staff the large center along with up to 40 adjunct spiritual directors, some of whom are bilingual. Houston, Guido says, has many Hispanics but is also home to the second-largest Vietnamese community outside of California.

Guido said the Cenacle Retreat House also runs a three-year training program for spiritual directors. The people being trained are not all Catholic, "but all are sponsored by a parish, church or faith-based community. These sponsoring groups recommend a person for the program, which means that they commit some financial resources. The sponsoring group assures the graduate a place to minister."

Support from the church for spiritual direction is unusually strong in the Houston archdiocese, Guido said.

"One of the things I love to do is to give a directed retreat in the parish with a team of directors," Donnelly said. "So we start on a Sunday, and the contract is that from Monday through Friday, the retreatants will pray for a half-hour and meet with a spiritual director for a half-hour somewhere in the parish. Then we wrap it up on the following Sunday."

After years of both receiving and offering spiritual direction, Ruffing has thought long and hard about what it needs and what it offers to the church.

"People can't do spiritual direction for a living," she said, adding that no spiritual director she knows is involved for the money. "I couldn't even pay my rent with the stipends I receive."

Nonetheless, Ruffing said local churches could — and should —subsidize those who serve as spiritual directors.

But in many ways, "there's not enough support for forming people in the faith," she said.

"We have a growing clergy shortage. So the fostering of a spiritual life in laypeople is one of the most important things we could do to support the interior growth of the church," she said. "Many people are so generous in what they give to parish ministries, but they need to be nourished. And anybody in a major ministry should also be in spiritual direction."

[Catherine M. Odell is a freelance writer and the author of Praying the Rosary for Intercession.] 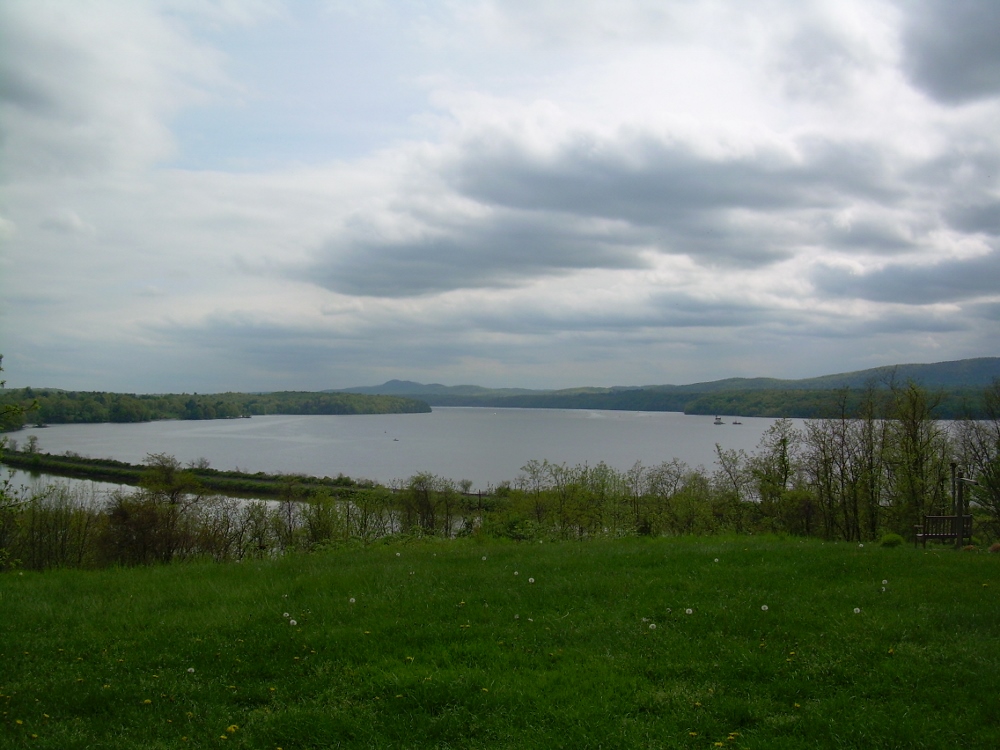 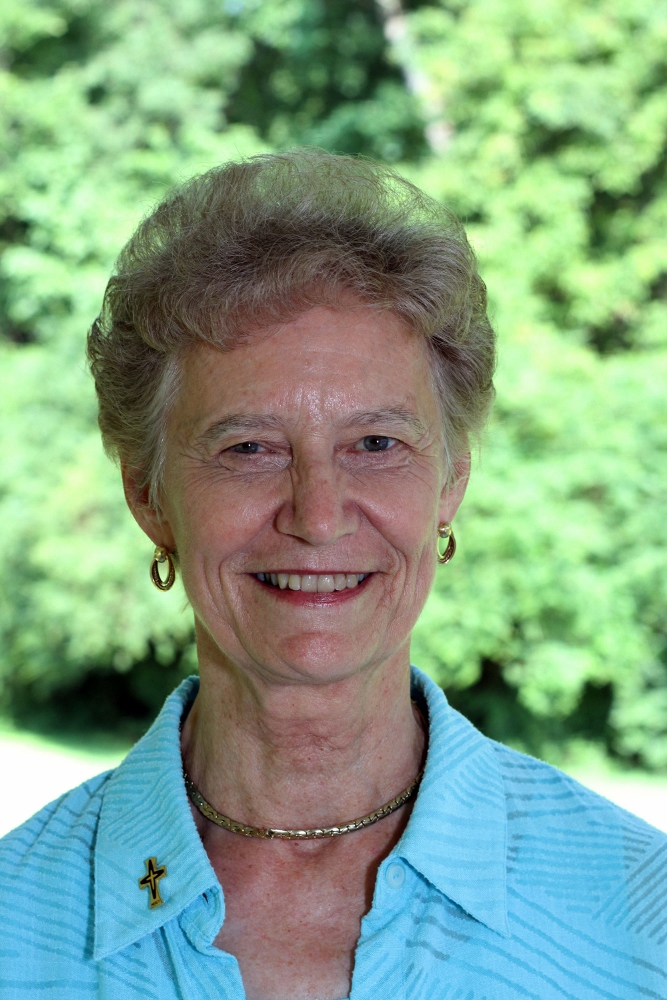 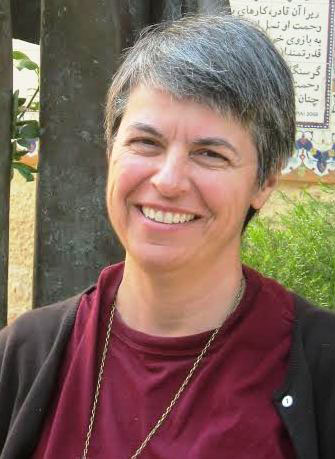 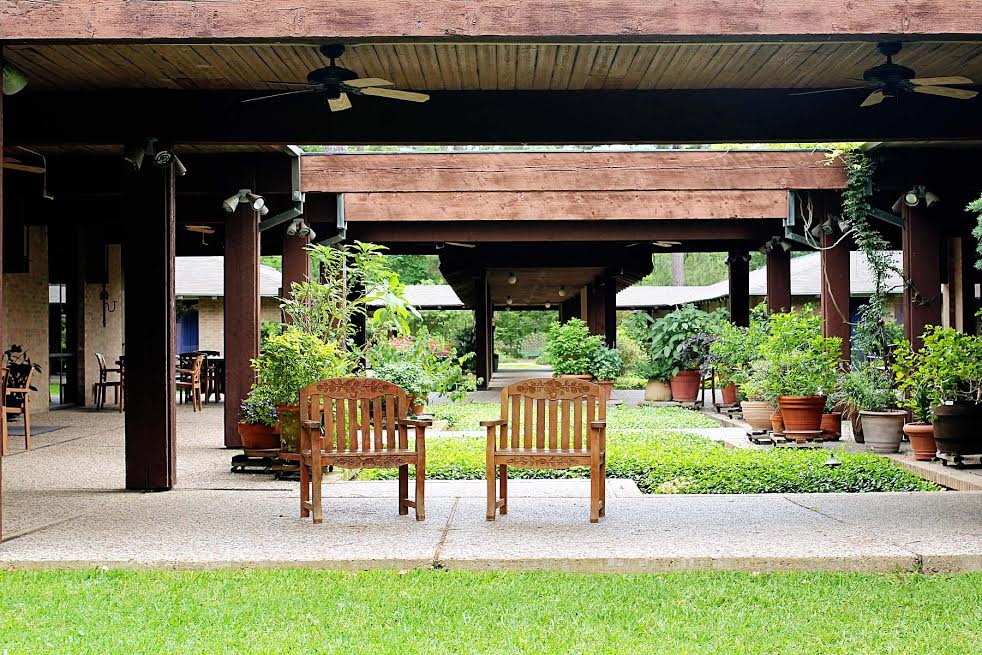 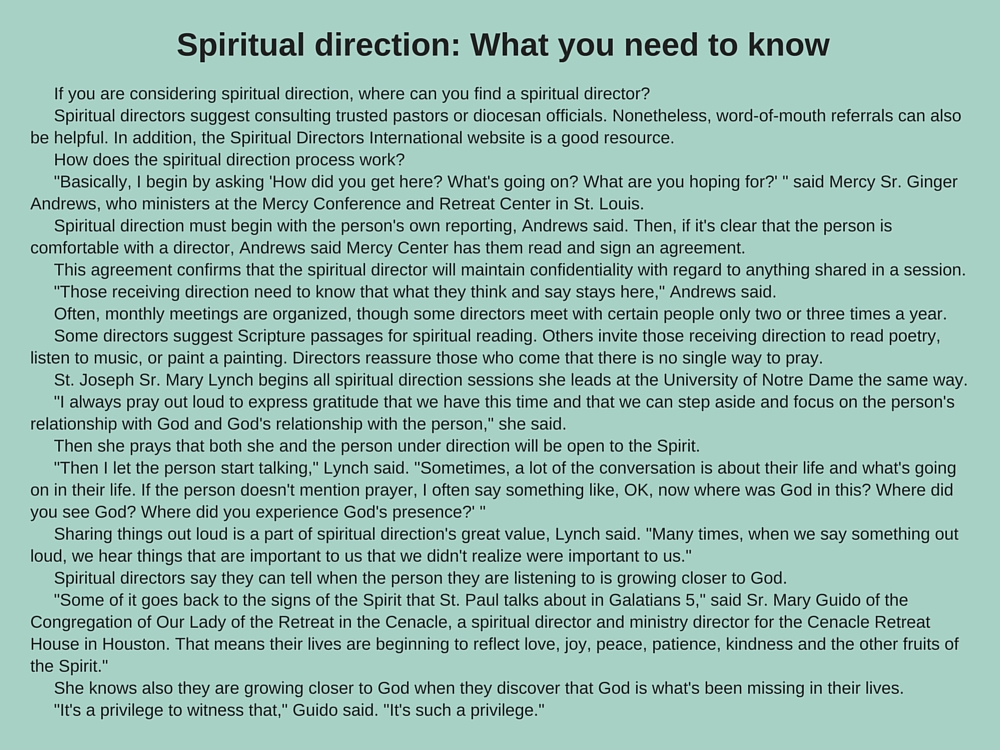