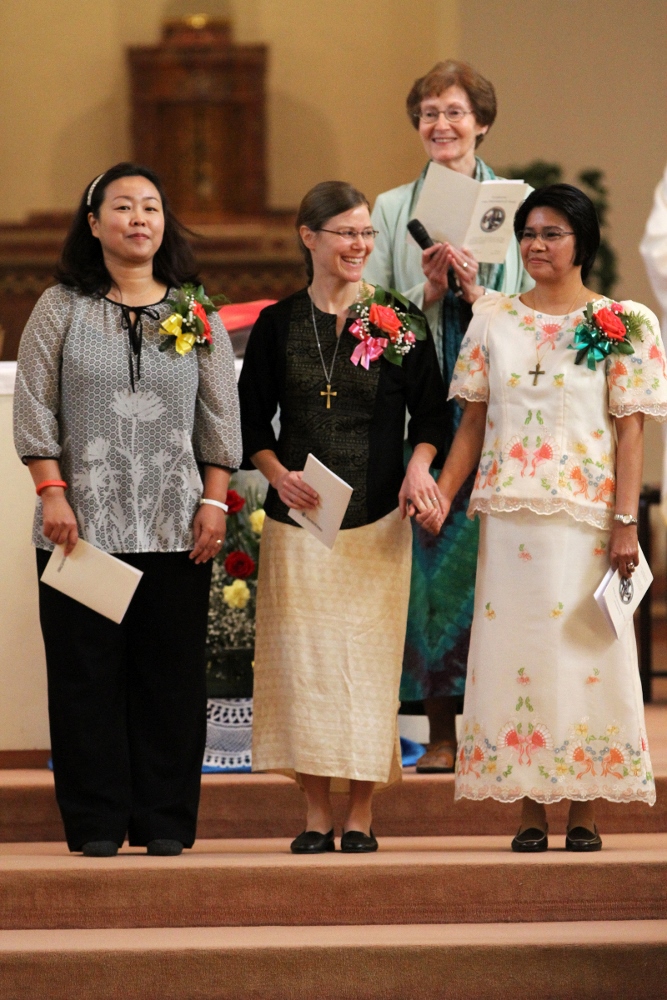 From left, Maryknoll Srs. Anastasia Lee, Julia Shideler and Abby Avelino stand in the sanctuary after professing their final vows during Mass at the Maryknoll Sisters Center in Maryknoll, N.Y., Sept. 28. Also pictured is Sr. Janice McLaughlin, president of the Maryknoll Sisters. (CNS photo/Gregory A. Shemitz)

Three women who recently took final vows as Maryknoll sisters after a lengthy discernment process said they were drawn to the order by a lifestyle of simplicity, its international presence and the diversity of its mission work.

Srs. Abby Avelino, Julia Shideler and Anastasia Lee took their final vows Sept. 28 during a Mass attended by nearly 250 people in Westchester County, N.Y., As Maryknoll sisters, they are part of an international order with approximately 500 members serving in 25 countries. In taking their final vows, the women publicly committed to lives of poverty, chastity and obedience.

The journey of these women to becoming women religious involved years of discernment and learning within the Maryknoll community. The process includes gaining information about Maryknoll's history, engaging in theological studies, participating in an intensive behavioral interview and pursuing a live-in experience with current sisters.

Before taking their final vows, the women took part in a six-month reflection program that consisted of workshops, resilience training and further learning about the order's mission and service abroad.

Maryknoll's diverse international presence, as well as its faction of younger sisters, attracted the women to the congregation.

"They have a lot of missions overseas, especially in developing countries, so that was a big appeal," Shideler, 36, told Catholic News Service in a telephone interview. "I thought, you know, if I found an order that had a lot more younger people, then that would give me faith that if I dedicated my life to that congregation that I would have people that I would grow old with and that there would be other people coming in behind me that would carry it on."

A native of California who was raised in Washington state, Shideler has been in mission in Aileu, East Timor, ministering to youth and teaching at a public high school. 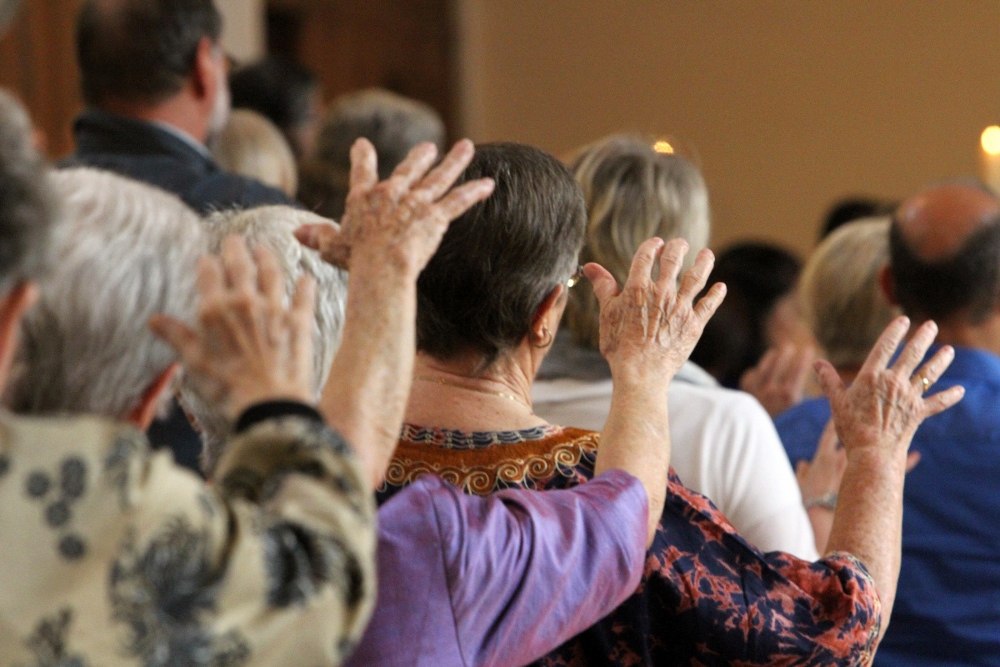 Lee, 42, said she was looking for more diversity in her life after growing up in what she felt was the "homogenous culture" of Korea, where she was born.

"I wanted something different," she said. "I decided to live differently out of the same pattern. . . . I had a good career [as a teacher], I had a happy comfortable life, but something was missing."

She has served with the Maryknoll Sisters Peacebuilding Team in Kenya.

The newly professed sisters also said they faced lingering doubts while they were discerning their vocations.

Avelino, 48, worked as a mechanical engineer before joining Maryknoll and said the decision to join the congregation was not an easy one.

"It was not easy to give up your job, to give up your family and everything," she said. "For me it was quite long to discern. . . . I would say it's a challenge but if I know I'm certain that I have a vocation to be a religious person . . .  it's a calling from God."

Shideler started thinking about religious life in college, she said, when she found it difficult to focus on her spiritual life as well as maintain the lifestyle of a layperson. 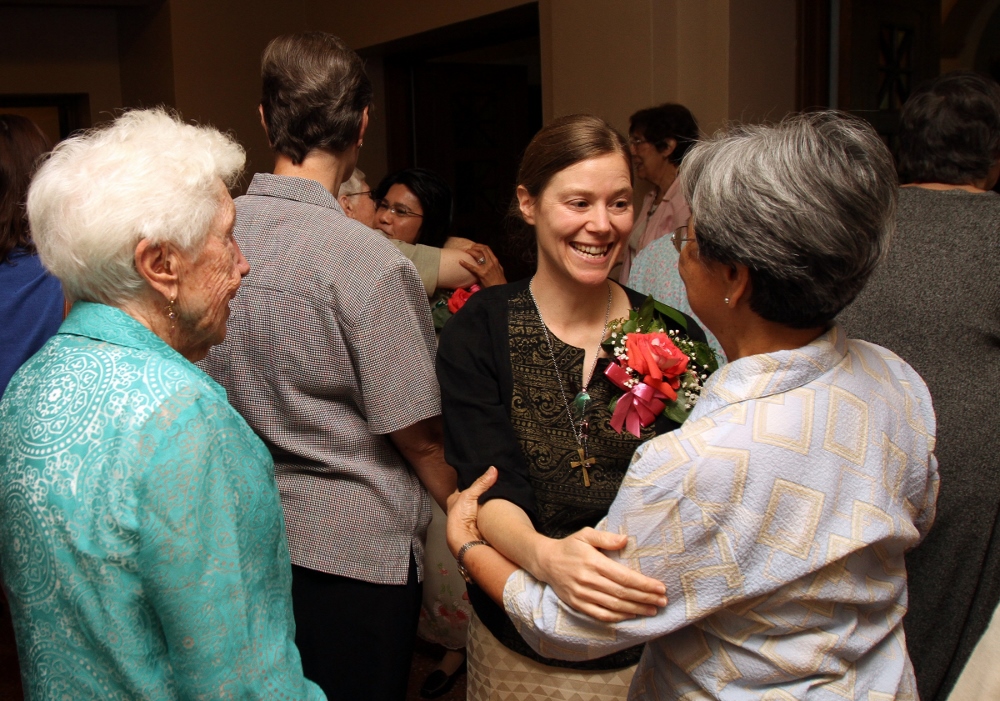 Maryknoll Sr. Julia Shideler smiles as she greets well-wishers after she made her final vows. (CNS photo/Gregory A. Shemitz)

"It just seemed like too many things to handle all at once," she said. "I wanted a more simple lifestyle but I also had to, you know, eat and pay my bills . . .  so I just felt kind of torn between what I really wanted to do with my life and then what I felt like I had to do in order to just survive."

As she learned more about what it would mean to devote her life to God, Shideler said she had a lot more doubts come up.

"I seriously discerned whether I'd make final vows or not. That was not an easy choice," she said. "The implications of the commitment became very real, and I did understand . . .  the sacrifice I was making, but I also understood the benefits, too."

Though she said she recognized that being a nun was a "radical way of living out the discipleship of Jesus Christ," Lee saw her vocation as an invitation.

"I'm not saying it's better than other lives but . . . it's different, it's a counterculture," she said. "I'm willing to be vulnerable in a foreign place, being a minority, being marginalized, not having [many] resources." 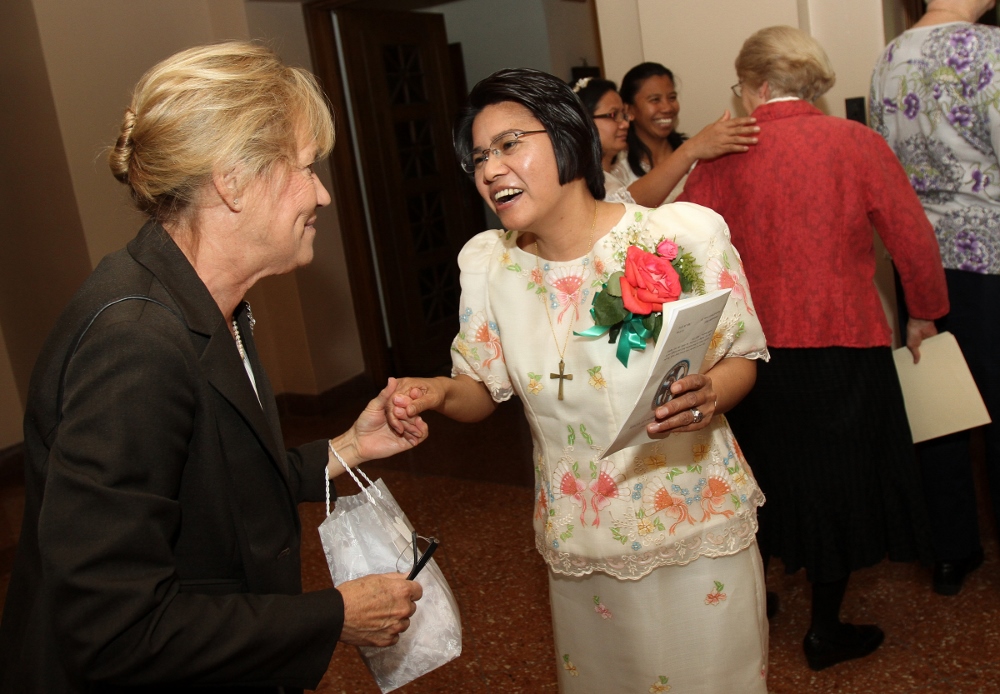 Maryknoll Sr. Abby Avelino smiles as she greets a well-wisher after she made her final vows. (CNS photo/Gregory A. Shemitz)

The Maryknoll order was founded in 1912 and originally known as the Foreign Mission Sisters of St. Dominic. Today, that name lives on in the service the sisters contribute to countries throughout the world.

"In the last 20 years, our members are coming from all over the world so it's much more a global face . . . so the countries to which we used to send missionaries, like Tanzania or Korea, we are now receiving women from those countries to join us," she told CNS. "The people attracted to us are women willing to uproot themselves, to leave their own homes, their own culture, to learn another language, to insert themselves and to live simply with the people."

Avelino, originally from the Philippines, has been serving migrant workers in Japan. She was there when the earthquake, tsunami and subsequent nuclear disaster at the Fukushima power plant occurred in 2011.

"When I responded to the disaster, I said, 'OK, this is why God wants me to be here,'" she said. "It was not easy. But it was a tremendous response to the needs of the people."

Upon taking their final vows, the three sisters have joined what McLaughlin called "one big family."

McLaughlin referenced the global network the new sisters have served and will continue to serve.

"It's wonderful to see how people can cross boundaries and become at home in another culture and each of those women represents that ability to cross borders and do that."