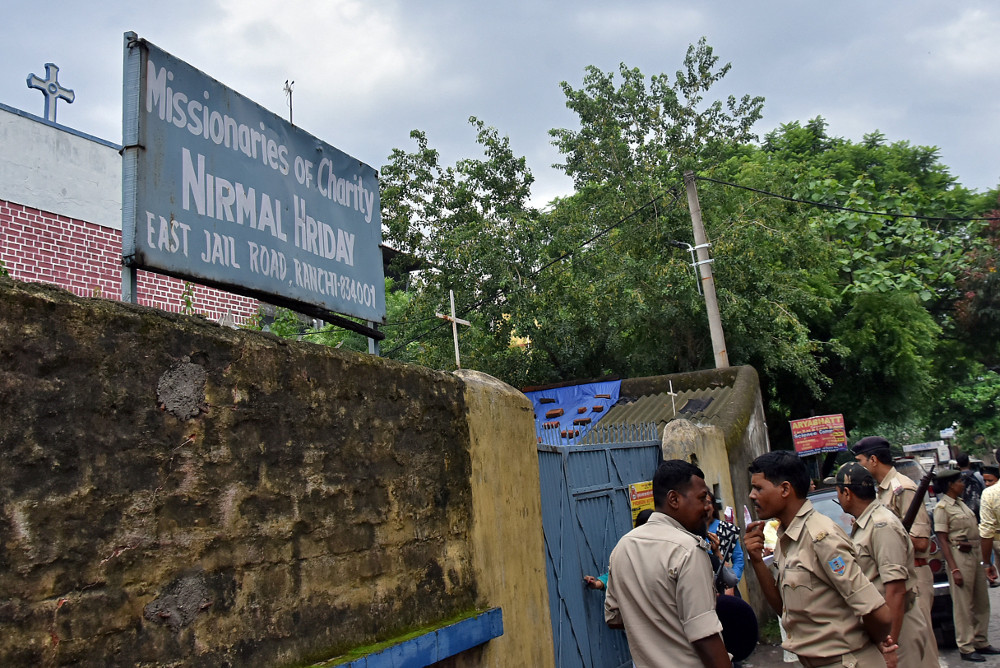 Indian police stand outside the premises of the Missionaries of Charity home in Ranchi, where Sister Concilia was arrested July 5, 2018, on suspicion of child trafficking. (CNS/Reuters)

Ucanews.com reported the top court turned down the plea from Missionaries of Charity Sister Concilia Jan. 29 on grounds that police had not yet pressed charges in the case. However, the court left the door open for her to file another application and also told the police to file formal charges soon.

The 61-year-old nun was arrested along with a staff member at the home following complaints that the staff member accepted money from a childless couple to give them a baby and then failed to do so.

Sister Concilia, who has diabetes, has been denied bail twice, prompting her plea to the Supreme Court.

"We feel very sad that an innocent and physically unwell nun is behind bars," said Bishop Theodore Mascarenhas, secretary-general of the Indian bishops' conference.

"We are pained that an aged innocent nun remains in jail when murderers and other hardcore criminals get bail," the bishop told ucanews.com.

The denial of the bail comes amid media reports that the Jharkhand state government has revoked the order's license to run the Nirmal Hriday home. Authorities also canceled licenses for 15 other child care centers run by other organizations, following a state-level investigation into children's care homes.

The nuns told ucanews.com on Jan. 31 that they have not received any official notification that their license had been revoked.

Christian leaders say projecting missionaries as criminals is a tactic used by Hindu groups in their attempt to make India a Hindu-only nation. They believe such cases will keep villagers away from missioners and Christian institutions.

No ending to violence against women in the 21st century