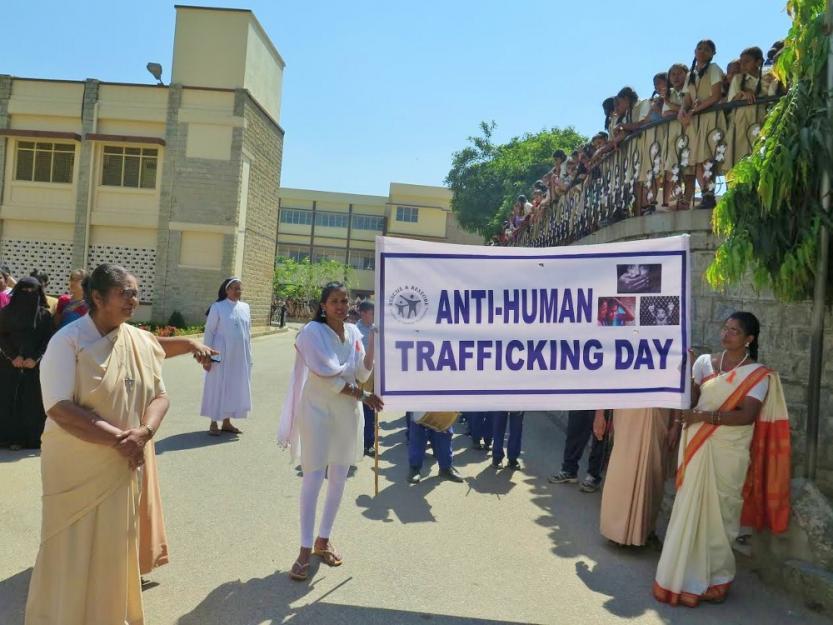 World anti-human trafficking day in 2016 was observed (AMRAT) in a school in Bengaluru, southern India by the Karnataka unit of Asian Movement of Women Religious Against Human Trafficking. (Provided photo, from earlier GSR story: "South Asian congregations join to crusade against human trafficking")

Talitha Kum leaders from 17 networks around the world capped off two weeks of training in Rome with an online panel discussion June 13 of best practices to fight human trafficking.

Talitha Kum has member networks in 76 countries and shares resources and ideas to fight human trafficking worldwide. Some of the panelists said their networks focus on healing those who have been trafficked/ while others said they concentrate on prevention.

A sister from India said young people in villages are recruited to what they are told are promising jobs in the cities; they are vulnerable to the tactic because they are seeking a better life than can be found in their rural areas. But once they go to the city, she said, they disappear and cannot be found.

She said one district had 372 young people go missing in five years. The Asian Movement of Women Religious Against Human Trafficking in India has 62 religious congregations that hold workshops in villages to educate young people on how to avoid becoming victims.

A sister from Nigeria said working together is key to success, saying we are not a drop in the ocean, but an ocean of drops.

Q & A with Sr. Gabriella Bottani