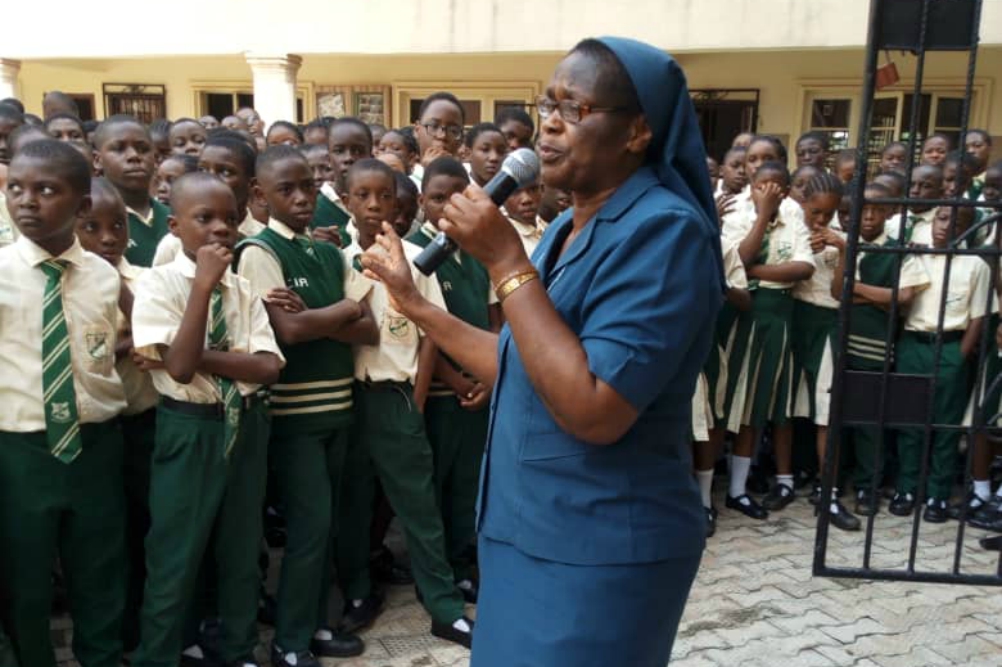 Sr. Bibiana Emenaha of the Daughters of Charity of St. Vincent de Paul speaks to students in February at a rural school in Edo on the dangers of trafficking. (Courtesy of the Committee for the Support of Dignity of Women)

Benin City, Nigeria — Editor's note: Global Sisters Report is focusing on the efforts of sisters to end human trafficking as Talitha Kum, the international anti-trafficking network of religious, marks its 10th anniversary and launches its Nuns Healing Hearts campaign. The special series will run periodically through September, when Talitha Kum will hold its first general assembly. Since its founding in 2014, GSR has dedicated a section of its coverage to sisters who in various ways fight human trafficking. Read all of our coverage.

Gloria Omoresewua was just a teenager in 2003, when a Nigerian woman brought her to Spain and she was forced into prostitution. Omoresewua made an agreement with the woman, who had promised her a better life in Europe: Omoresewua was to pay her 45,000 euros ($50,200) before she could gain her freedom.

For every man she slept with for 30 minutes, Omoresewua earned 20 euros. Every month, she sent 500 to 1,000 euros back home to her family in Nigeria.

After paying about 30,000 euros back to the woman, Omoresewua became tired of prostitution and decided to quit. The woman threatened her that if she did not pay her back fully, she would be arrested.

"I didn't have a job and was sleeping in the streets," said Omoresewua, now 33. "I was tired and wanted to come back home."

"My father said I should come back, but my mother didn't agree when I told her I wanted to come back. My brothers said I should not come back. I decided to return when an NGO in Spain paid for my flight," she said.

Since 2015, when Omoresewua returned to Nigeria, sisters from the Daughters of Charity of St. Vincent de Paul have been helping her reintegrate back into society. They and other sisters from different congregations in Nigeria are fighting human trafficking through advocacy and creating awareness to dissuade young girls and women like Omoresewua from taking a dangerous route across the Mediterranean Sea to Europe, where they can be trafficked into prostitution or slavery.

Since 2017, the United Nations' International Organization for Migration (IOM) has flown home more than 10,000 Nigerians who could not get to Europe after being in countries like Libya, Mali and Niger. A 2017 report from the organization said of the more than 181,000 migrants who traveled by sea from Libya to Italy in 2016, more than 37,000 were Nigerian, with Nigerian women and unaccompanied children accounting for 11,009 and 3,040 travelers, respectively. Eighty percent of those women and girls are likely to become victims of sexual exploitation, IOM said. 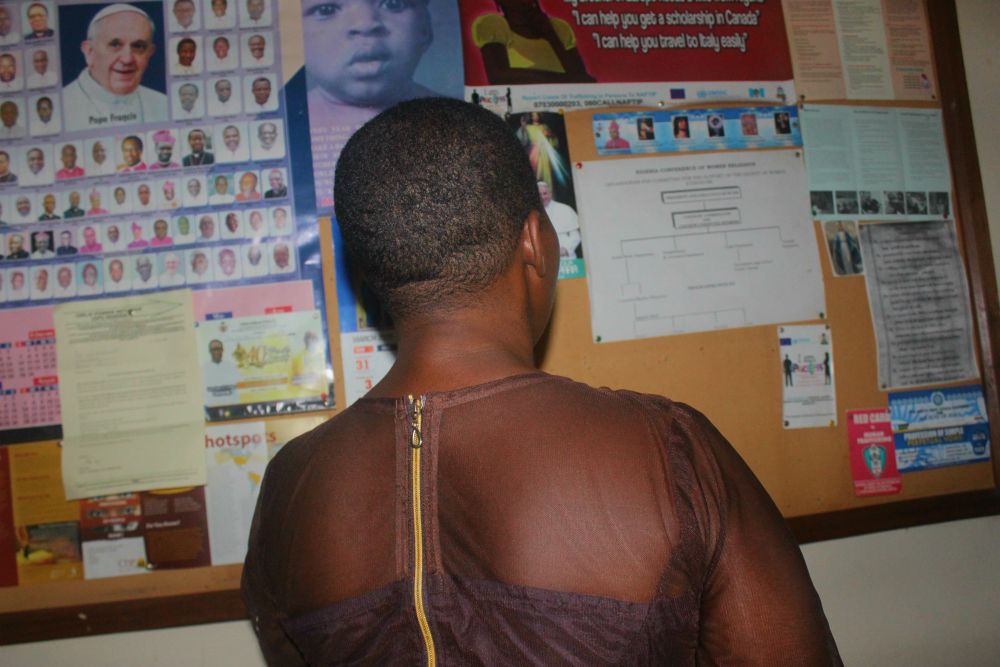 Gloria Omoresewua was trafficked to Spain in 2003 for prostitution. In 2015, she quit and decided to return home. (Patrick Egwu)

National and international networks of support

Since 2015, Sr. Bibiana Emenaha of Daughters of Charity of St. Vincent de Paul has been the coordinator at the Committee for the Support of Dignity of Women (COSUDOW), where she leads the advocacy and campaigns in fighting human trafficking in Nigeria.

Founded in 1999 by the Nigerian Conference of Women Religious, the committee collaborates with other anti-trafficking organizations like the National Agency for the Prohibition of Trafficking in Persons and U.N. migration organization. Six local nongovernmental organizations have joined COSUDOW in the fight against trafficking, too.

Every six years, the Nigerian Conference of Women Religious holds elections in which a new congregation of the conference's 57 member communities is elected to run women's dignity committee.

With headquarters in Benin City, Edo — an inland state in central southern Nigeria known for high rates of human trafficking — COSUDOW sets up projects and skill-acquisition programs that help reintegrate Nigerians who return home from Libya, Mali and European countries.

In 2007, the Episcopal Conference of Catholic Bishops donated a two-story building to COSUDOW to help resettle returnees. The building serves as the only temporary shelter run by a Catholic organization in Nigeria for returnee migrants.

"We make them feel at home here and take them in as members of our family," Emenaha said. "We go to the airports to pick them when IOM brings them back. When they arrive in Lagos, they stay for two days in a house given to us by Our Ladies of Apostles congregation. After two days, they come back here, and here is not a permanent place."

Emenaha and two other sisters from the congregation — Sr. Margaret Ogbuja and Sr. Stella Agbawa — provide professional counseling to the returnees and visit schools to create awareness on the dangers of trafficking.

"The first thing we do is to give them one week just to sleep and rest. Then after that, we begin to listen to their stories and counsel them — both religious and psychological counseling," she said. "We provide some form of education because most of them cannot even write their names. And we visit their families through family tracing and reconcile them, especially those that came back when their families did not want them to come back or those that went without letting their family members know."

U.N. International Organization for Migration and other nonprofits fighting human trafficking like Slave No More, Solidarity With Women In Distress, Italian Union of Major Superiors and Caritas provide financial assistance to the returnees to start a business after the sisters have trained them. Returnees who opt to go back to school are offered scholarships by congregations like the Daughters of Charity in Turin, Italy. Since the inception of COSUDOW, more than 400 victims of trafficking have been rehabilitated, reintegrated and supported with funds to start their own businesses.

When Omoresewua returned, Daughters of Charity of St. Vincent de Paul trained her in hairdressing for a year and a half. When she completed her training in 2016, the sisters provided some funds and started a hair salon for her.

"We do prevention, protection, evaluation and monitoring to know how they are coping," Emenaha said. "During Christmas, we bring them together for a fun time." 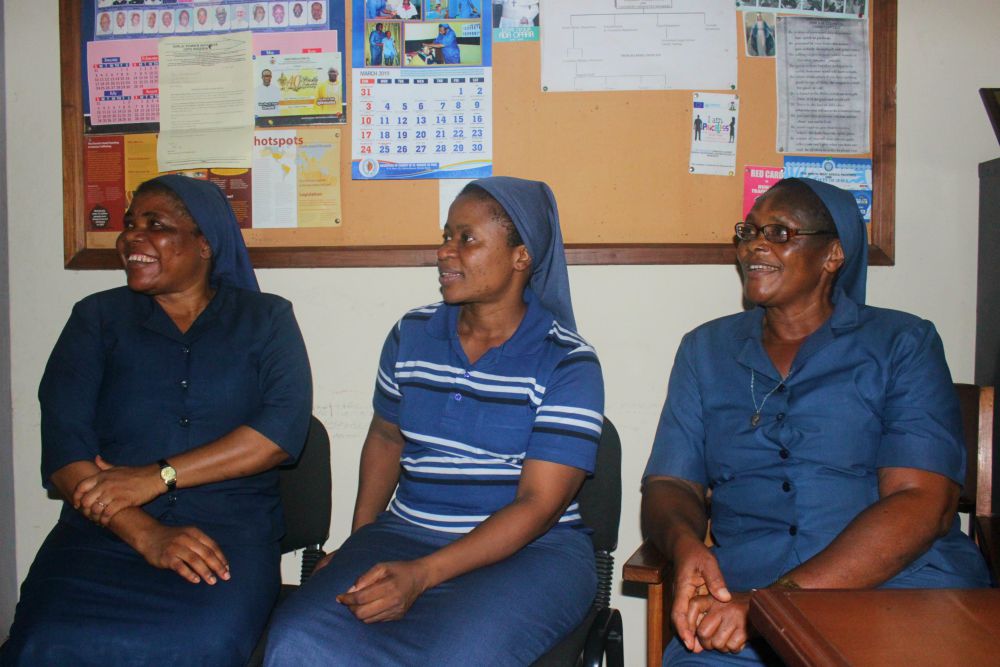 Sr. Florence Nwaonuma of the Sisters of the Sacred Heart of Jesus runs Fullness of Life Counseling and Development Initiative, an anti-trafficking organization in Benin City that rehabilitates returnees and provides empowerment programs for them to earn a living.

Nwaonuma's congregation also runs projects that provide families with business skills and a source of funding to help them set up small businesses, which the sisters say lift the families out of poverty and prevent family members from being trafficked or lured away by economic opportunities abroad.

"We realized that a lot of the problems stem from the families because if the families are well managed and kept in one piece, it will invariably have effects on the society," said Nwaonuma, who headed COSUDOW from 1998 to 2008. "We have preference for widows because some of them are from poor families, and that is why you see their children being vulnerable to trafficking. They want to travel abroad to help their families."

Nwaonuma and other Sisters of the Sacred Heart of Jesus also provide psychosocial support and counseling for the returned migrants as a way of relieving them from the trauma they passed through. When faced with difficult cases, they refer people to a psychiatrist, who provides special services and recommends medication to stabilize them emotionally.

"We monitor their recovery and make sure they are fine before we bring them back," Nwaonuma said.

'They can be successful here in Nigeria'

Each year on July 30, World Day against Trafficking in Persons, Sr. Gloria Ozuluoke of the Religious Sisters of Charity organizes awareness campaign programs on human trafficking across Nigeria.

"As a congregation, our mission is service to the poor, and we know that poverty has a huge contribution toward the trafficking of young girls and women outside Nigeria," Ozuluoke said. "These people are mostly picked from the rural areas. We try to change their mindset that they can be successful here in Nigeria without traveling abroad."

At a center belonging to their congregation in Lagos in southwest Nigeria, they hold skills-acquisition sessions and training for returnee migrants in skills like catering, tailoring, fashion and designing. Some of the returnees register with the National Business and Technical Examinations Board for practical hands-on business training with experts and to obtain certificates.

Nwaonuma's Sisters of the Sacred Heart of Jesus also work to prevent trafficking through awareness campaigns.

"We move from parish to parish, community to community and schools and visit community leaders and inform them about the dangers of trafficking," she said.

The work of the sisters is making an impact. In 2017, the government passed an anti-trafficking law that punishes traffickers with prison terms and the sale of their properties, with the money going to the federal government.

"Presently, we have about 23 cases in court waiting for prosecution against offenders," said Nwaonuma, who was part of the committee that worked on the draft of the law. 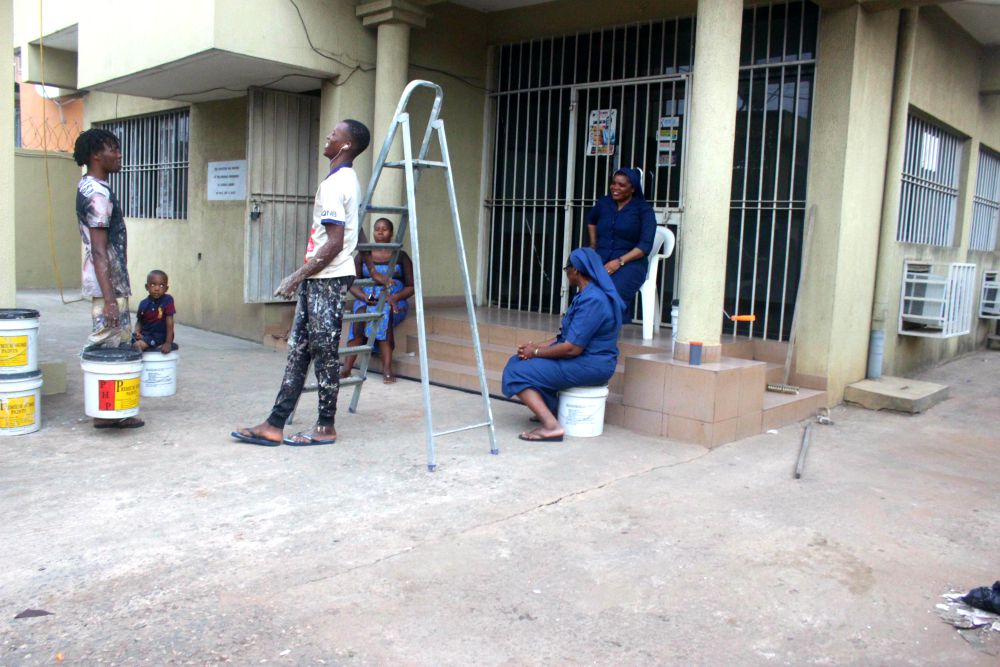 To make the shelter look new and comfortable to returning Nigerians, the sisters recently invited painters to repaint the building. (Patrick Egwu)

Despite the progress, the sisters face some challenges, especially lack of money for their projects. For the children of the returnees, Emenaha said her congregation is making arrangements to enroll them into schools in September but said the lack of funds might affect the plans.

"We are the only NGO with a shelter in Nigeria, and to run a shelter is not easy," Emenaha said. "It requires money, and we have to pay the salary of 10 staff working here."

Likewise, Nwaonuma said, "the economic reintegration for families and victims who returned requires money. In cases we can't handle, we refer them to specialists who charge us like 50,000 naira [$139], and we pay the bills. It's not in all cases that we have the money to pay."

Ozuluoke said the spiritual development of young people in the country is poor.

"They hear a lot of things through the media and group interaction, and they get indoctrinated," she said. "With this, many of them fall prey to human trafficking. We need to do more in this regard."

Every week, Omorosewua visits the COSUDOW shelter, where she spends time with other returned victims. For her, traveling to Europe was a bitter experience.

"I still feel the trauma of my experience in Spain. I come here sometimes to talk with other girls like me and advise them against traffickers so they won't be victims again," she said. 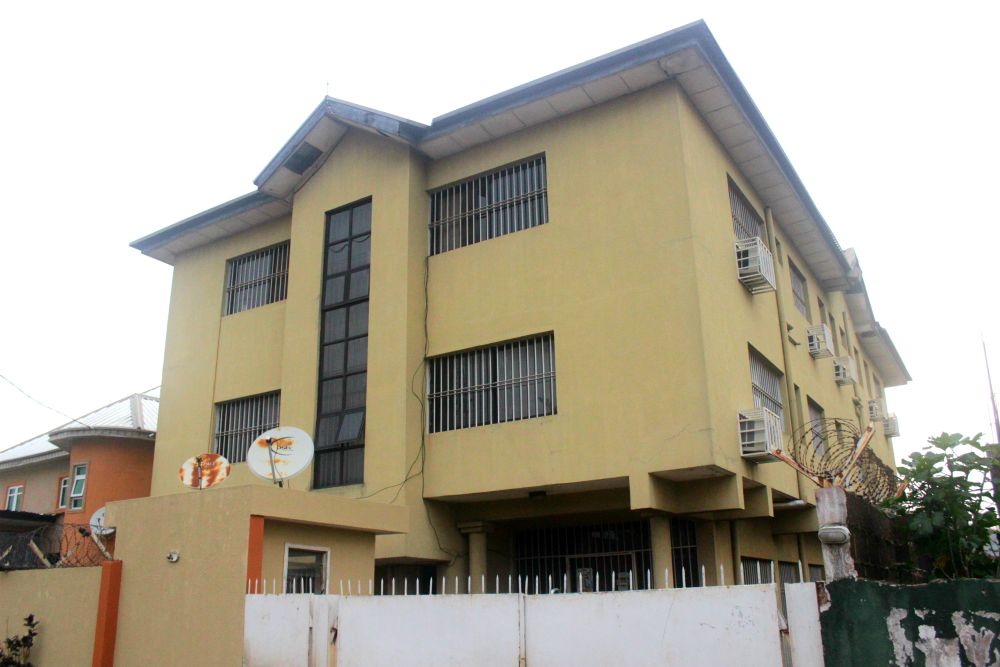 The two-story building that serves as temporary shelter for returnee migrants before they are reintegrated into society. The building was donated by the Episcopal Conference of Catholic Bishops of Italy in 2007. (Patrick Egwu)

[Patrick Egwu is a freelance journalist based in Nigeria.]