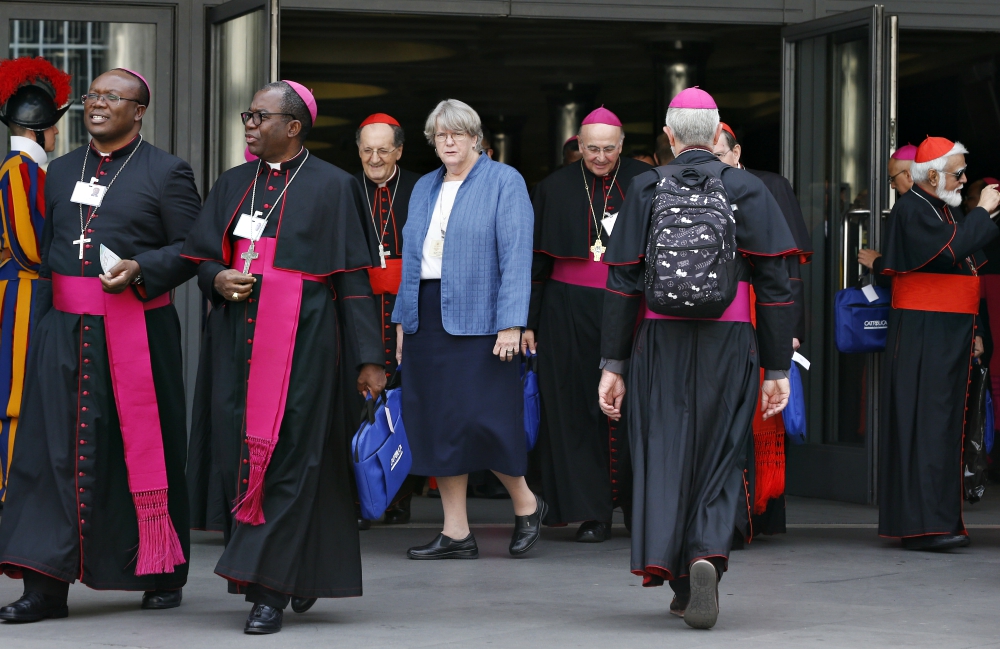 Sr. Sally Hodgdon, superior general of the Sisters of St. Joseph of Chambéry, leaves a session of the Synod of Bishops on young people, the faith and vocational discernment Oct. 16 at the Vatican. (CNS / Paul Haring)

Rome, Italy — The vice president of the umbrella organization representing the world's Catholic women religious said the group will continue to press for women religious to be granted a vote at the Vatican's Synod of Bishops.

Sr. Sally Hodgdon said there are two nonordained religious brothers serving as full voting members of the ongoing synod on young people while the seven sisters taking part are doing so in nonvoting roles.

"That should change," she told Global Sisters Report.

Hodgdon, the No. 2 official for the Rome-based International Union of Superiors General (UISG) for the last five years and one of the seven women religious taking part in the Oct. 3-28 gathering, said that under the Catholic Church's theology, brothers and sisters have analogous roles as nonordained, professed members of religious orders.

"These two brothers are allowed to vote," said Hodgdon, who also leads the Sisters of St. Joseph of Chambéry. "They are equal to me because they are both superiors general of congregations. I'm a superior general of a congregation."

"In theory — not even in theory, in reality — we are equal," she said in an Oct. 16 interview. "If the pope allowed the two brothers to vote, it's logical that I would be able to vote."

Lasallian Br. Robert Schieler, a member of the Union of Superiors General's executive council and one of the two brothers serving as members of this year's synod, told the National Catholic Reporter in an Oct. 15 interview that the two organizations plan to ask Pope Francis about participation of more women religious and the possibility of giving those who take part the power to vote in the discussions.

Hodgdon said members of the men's group had raised the question of sisters voting at synods three years ago during the 2015 gathering on family life issues.

After French Br. Hervé Janson of the Little Brothers of Jesus was appointed a full member of that synod, in a first for brothers, Hodgdon said members of the men's group spoke privately with Vatican officials, saying: "Well, there's going to be three sisters from the UISG, and they should also be able to vote."

"Nothing went forward, but the men's group brought it up," Hodgdon said.

Hodgdon said the International Union of Superiors General was asked to select three women to take part in the 2018 synod: one sister in leadership of the group and two younger sisters, one from Africa and one from Korea.

"We were fine with that because we're happy to be there," she said.

Besides the three sisters from the International Union of Superiors General, the Vatican selected four other sisters to take part.

Although Hodgdon said her group would continue to seek the vote for women at future synods, she also said the issue of women's participation in general at those gatherings is "more important."

"The important thing is that we have the participation of the people of God," she said. "That's what we want. That's what's really important."

Hodgdon pointed to the impact that even nonvoting members of the synod have during the discussions held within the meeting's 14 working groups.

"Whether I vote or not doesn't really make a difference at this synod," she said. "But where I have my influence and my impact is in the small group: by bringing up issues that I see in the text that other people don't notice, by raising things where the language is very strongly male, masculine, and to ask [for it] to be changed."

"That's where our presence is known," she added. "When we're sitting around the table at the small groups, it's not about voting. It's about what is best for the church and for the youth."

However, "I know that it's important for women to be at the table and for our leadership to be exercised at the table of decision-making in the church," she said. "One hundred percent, I agree with that, and UISG agrees with that. We don't have to be priests or cardinals or bishops to do that. We can just use our gifts to make the changes through our presence and continuing to push for the vote."

Hodgdon said she found the atmosphere of the synod to be open and the 267 prelates taking part to be imaginative about how the church could better serve young people.

The bishops "are really coming up with some creative ideas for how to reach out to youth in a new way," she said. "They really desire, they desire more than I've ever heard ... to be present to youth, to spend time with youth, to listen and dialogue with youth."

Hodgdon said the bishops have been treating her and the other sisters like equals. "There is no sense that we're not peers."

Just that day, she said, she had been in the elevator with two other sisters when the car stopped on the floor before the one they were going to.

"The pope is standing there," she said. "We were shocked. He came right in. We chatted with him."

The body bags of pandemics and wars

Push through the fear of losing white Christian privilege