When Sr. Ana Gabriela Castro arrived in the United States from Morelia, Mexico, in 1988 as a Guadalupan Missionary Sister of the Holy Spirit, she felt isolated — not from her own community, but from the rest of religious life throughout the country.

Because she was no longer in Latin America, she felt disconnected from religious life in her home country. And in the United States, religious conferences, such as the Leadership Conference for Women Religious or the Council of Major Superiors of Women Religious, are reserved for those in leadership.

"I thought about how there are a lot of Hispanic sisters in the U.S. in the same situation as me," Castro said. "I started going to the LCWR assembly in 2006, when I was the provincial for my community, and I was very, very overwhelmed. It was an overwhelming experience for me as a Latina, as a Hispanic sister."

She said she didn't see another Hispanic sister in attendance and struggled with her English.

"But I decided to stay there, because I knew we needed to make a connection and be a part of this," she said.

Then, she met Most Sacred Heart of Jesus Sr. Joan McGlinchey, the vicar for religious in the Chicago archdiocese, and eventually, the two began to organize encuentros — gatherings — for sisters who came from Latin America without a major superior in the United States.

The Association of Hispanic Sisters in the United States (Asociación de Religiosas Hispanas en los Estados Unidos, or ARHEU), once an informal, grassroots network, has since received a grant from the GHR Foundation to become a bona fide organization.

With that, they're ready to change the realities of Hispanic sisters in the United States.

Creating a connection and a stronger identity

The encuentros began in 2008 and were a response to a need that "has become more and more acute," said Arturo Chavez, president of the Mexican American Catholic College (MACC) in San Antonio. That need is "between international sisters from Latin America ministering in the U.S. — usually just a few from a community — and the disconnection they feel from the wider church."

MACC, which also facilitates the U.S.-Latin American Sisters Exchange Program through Catholic Extension, is partnering with ARHEU to administer the GHR Foundation grant and provide the sisters resources and space as the organization strengthens and develops enough to eventually run on its own.

When a sister arrives to the United States at the request of a bishop, religious community, or priest, usually to work with a booming Latino population, "what often ends up happening is that there's very little support, and certainly fewer resources for ongoing formation and education," Chavez said.

The first encuentro, held in Chicago, was originally intended to be a support system, and 52 sisters from about 30 different communities attended.

"It was like water to parch thirst," Chavez said.

They've since had three more encuentros, eventually with 200 sisters attending, despite the group's lack of infrastructure for greater outreach.

But these biannual gatherings are not merely joyful events, Chavez said: They are also a place where the women "cry together and try to problem-solve together."

ARHEU was born with the intention to help Latina sisters who did not enter a U.S. congregation, as they are the ones who arrive without a "base," said Comboni Missionary Sr. Inma Cuesta, who currently helps run ARHEU.

"We realized that the sisters need to have some infrastructure to be better organized" so that their leadership in their home country can "have a point of reference in the U.S.," she said.

The encuentros gradually developed a stronger identity each time it convened. They created a mission statement at the second gathering, later developed a newsletter and started to "articulate who they are and what they're doing here and hope to accomplish as a group," McGlinchey said. "One of the biggest messages in all of the encuentros was that you have something to give to us, the local church, and we want to be able to receive it and help you give it."

They began networking with major superiors from Latin America and realized they needed to "enlarge the circle to respond to the sisters' needs."

For example, Anglo sisters who speak Spanish, who have previously worked in Latin America, or who just want to accompany their Hispanic sisters have joined previous encuentros, too.

"Welcome! Everybody is welcome," Castro said.

Castro noted that in the beginning, the organization was met with criticism. Some thought the Hispanic sisters didn't want to work with other religious or that the effort was divisive.

"It's not that," Castro said. "But in order to make connections and build bridges, and in order to work with religious life in the U.S., for us, the first step is to be recognized: where we are, where we're living, working, what is our situation, our reality, our sufferings, our contributions, our needs.

"We want to consolidate the association in order to start bringing services to sisters of acculturation and ongoing formation and be a resource to leadership teams in Latin America."

With this grant from the GHR Foundation, the sisters behind ARHEU hope to improve their communications efforts. Follow-up with sisters after regional meetings is difficult without a database or full-time staff — the sisters are volunteers, juggling their work and ministries with keeping the organization afloat. Hiring an executive director is a priority.

"The encuentros are not enough," McGlinchey said. "The needs are unmet, and there's hundreds of women religious we have not contacted yet who know very little about this, if anything."

Sr. Teresa Maya of the Congregation of the Sisters of Charity of the Incarnate Word points to the 500 foreign-born Latin American sisters under the age of 40 who live in the Los Angeles archdiocese.

"It's a sign of the time," said Maya, who helped spearhead ARHEU before becoming president-elect of LCWR in 2016. "The fact that ARHEU is getting organized at the same time that we're beginning to notice this movement of sisters into the U.S. [means that] ARHEU will be able to be a conversation partner with all the other organizations within the church."

'We talk about them, but we don't talk to them'

Though the United States has roughly 5,000 Hispanic sisters, those who spoke with GSR all agreed that they're largely invisible as a group.

"I think Latina sisters, whether they are born in the U.S. or foreign-born, have been like the rest of the Latino population in that we know they're there, but we don't notice," Maya said.

"You don't want to blame anyone, but unless the sisters themselves get organized and have a collective voice, it's very difficult to create the space or to make room at the table for their point of view and contributions to the American church and mission."

"We talk about them, but we don't talk to them," she said.

Chavez said ARHEU has to become their "megaphone" so the church and society can become more aware of them, and thus more responsive. "I believe that's incumbent upon us as a church."

With a high demand for Spanish-speakers, dioceses will assign Hispanic sisters to work with immigrants — "immigrants within immigrants," McGlinchey said — often depriving them the opportunity to learn English and fully expose themselves to the new culture they need to navigate.

"There was a tendency for all immigrants to stay among themselves," she said, adding that this is not a problem specific to Hispanics. "This is an area where we hope to be able to provide resources, to build relationships and give them what they need to be more effective in this new culture while helping the church understand what they bring."

A pervasive cultural misunderstanding comes with parish structures and the seemingly never-ending managerial demands. Maya said the church in the United States may be the most bureaucratic in the world, made up of councils, budgets, licensing, accreditations, contracts, etc. For those coming from Latin America, where parishes are run much more casually, it's an administrative nightmare.

"Migrants come here and are like, 'What do you mean, we have to register for a parish?'" she said.

Priests have told Maya that those who attend the Spanish Mass rarely contribute to the collection.

"And I just say, 'Have you explained it to them?' All of those things — no one tells you. They don't say, 'This is how we pay our bills, how we pay for the security outside.'"

"There are structural, organizational, cultural, historical differences between the U.S. church and the Latin American church," Maya said. "We're all Catholic, but it's a different expression of how you organize."

This particular rift is what makes the acculturation process especially difficult, Castro said, as not enough time or accompaniment is devoted to easing this transition.

"It's very important to share how you feel when you arrive here. It's not homesickness. It's that everything's different: the culture, the structure of the church, religious life. It's just different. We need to learn about that but share ours, too."

Castro said her leadership in Mexico told her to "go and work" in the United States but did not prepare her for life in another country, a common occurrence.

"Because we work with Hispanics, working all the time, we don't have the opportunity to learn the language or have an immersion, an acculturation program. It makes the experience much more difficult, and a lot of sisters go back home. Some lose their vocation," she said.

"Sometimes we confuse the acculturation process in crisis with our vocation. Sometimes we say, 'What am I doing here? I don't know what I'm doing here. Maybe I'm not for this.'"

Empower the sisters, empower all US Hispanic Catholics

When asked how the church could benefit with a stronger ARHEU, Chavez recalled an adage: When you educate a woman, you educate a nation.

"These immigrant women are accompanying other immigrants, and as these women become more educated, as they become more empowered and supported, they in turn empower and support the millions of people in this country who are living in the shadows, who are taken advantage of, and who are ignored, sadly, not just in our social systems, but in our churches, as well," Chavez said. "It should give people great hope that these sisters are among us."

As dioceses find themselves more multicultural, having bilingual sisters to serve as "effective bridges" becomes more crucial, McGlinchey said, and Hispanic sisters in the United States are eager to fill that role.

"That's a goal we've had as an organization. Whether you're in downtown LA or in an isolated part of Kansas — how do you navigate that, and not lose your identity, and remain true to yourself as a consecrated woman in your congregation, and understand where you're working and the people you're serving as you navigate this culture?"

Every Sunday, the U.S. church celebrates Mass in more than 60 languages, and the church has a "special call" to serve all the people in the pews, Maya said, adding that the reason bishops are inviting sisters from Latin America is because "we are noticing these people in the pews."

"Whether we have ARHEU or not, this is already happening; they are already here and serving."

Chavez said in his experience, he sees young women become inspired by the Hispanic sisters and decide to respond to the call for religious life.

"This shows us that religious life is going to be vibrant and viable into the future of this country, and it'll shake up the way we do things a little," Maya said. "There's going to be more fiesta." 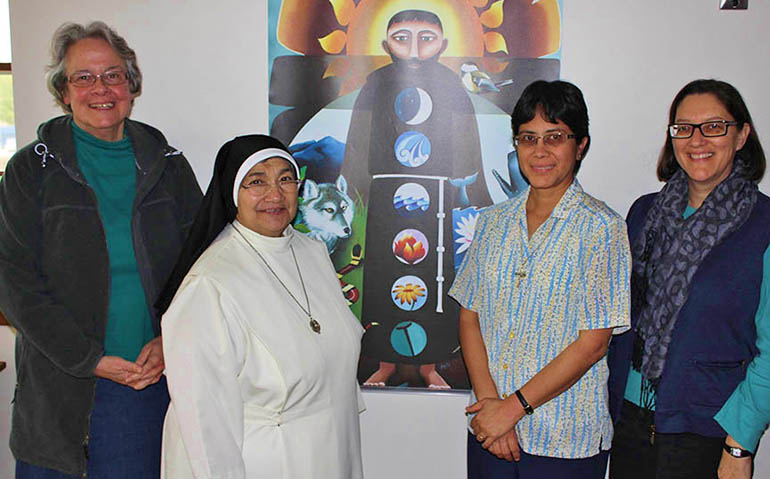 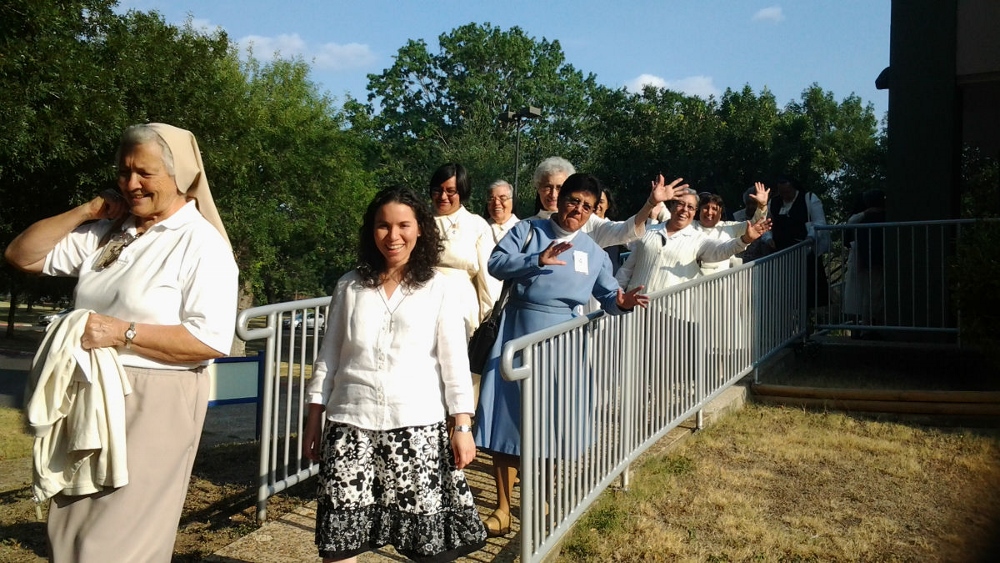