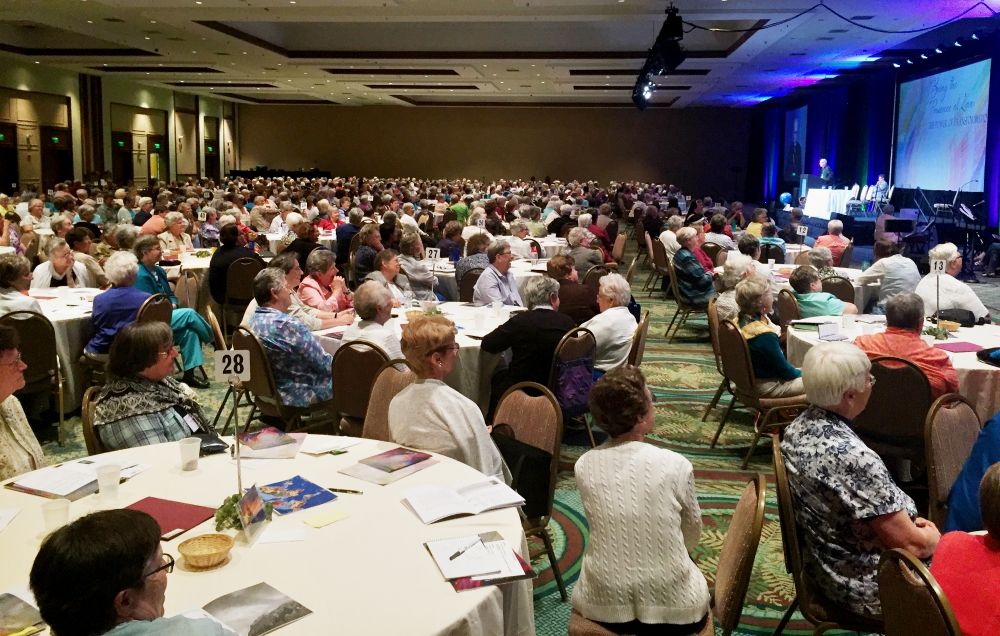 More than 700 sisters gather Aug. 9 for the first full day of the 2017 annual assembly of the Leadership Conference of Women Religious, held Aug. 8-11 in Orlando, Florida. (GSR photo / Soli Salgado)

Orlando, Florida — Switching between podium and piano, keynote speaker Christopher Pramuk played slave spirituals and U2 hits for the more than 700 attendees** of the annual assembly of the Leadership Conference of Women Religious, held Aug. 8-11 in Orlando, Florida.

He struck a chord metaphorically, too: Pramuk, a theologian from Regis University in Denver*, tied together the concepts of music, grief and refuge in his lecture, "Will the Circle Be Unbroken? Leaning Into the Mystery of Resurrection Faith."

Rather than equating refuge to escape, Pramuk defined it in this case as "where we go to find our center," he said Aug. 9.

Pramuk's refuge is music. As an 8-year-old, he discovered it "seemed to take my breath away and give it back in the same stroke."

"It is one thing to think and talk about race and race relations across the color line in the academy, society and church," he said. "It is quite another to accompany a great artist and storyteller as they plunge you headlong into the deep river of black suffering, resistance and grace.

"It was in this class, and indeed in Dr. Barnwell herself, that I first encountered the presence of Christ whose face happens to be black, whose presence still lives and dies deep down in the dangerous memories of the African-American communities."

Only after being introduced to the spirituals, Pramuk said, did the Resurrection cease to be an abstraction to him.

"In the womb of such experiences, the tender question of every young person — 'Who am I?' — is transformed into an arguably more fundamental and beautiful question: 'To whom do I belong?' "

"In laying ourselves open to one another, we become, as it were, who we already are in the eyes of God: resurrected beings, beloved community, a new creation," Pramuk said. "It is no wonder that the music of the black church was at the very center of the civil rights movement," as it is music born of struggle, pain and courage.

When words are sung, Pramuk said, they become sacraments: "Our pathos becomes one with God's pathos, God's cry for justice, God's own dreams for the world."

After listening to the address, sisters took to their small tables to reflect on his message. Representatives were later called to the stage to share their thoughts.

One sister said how unusual she found the keynote address: "so right-brained, evocative, unusual, and that's what religious life needs right now."

Pramuk played "Wade in the Water" at the piano during his keynote address, analyzing the strength behind the solemn minor key. One sister said she thought, in relation to religious life, "Perhaps we need to sing a song in a minor key for a while, not in a major key, and really dwell in the minor key as long as we need to."

Pramuk also performed "Will the Circle be Unbroken?" during his lecture, calling attention to "how it carries us into that uneasy liminal space between death and life, loss and mysterious communion with the dead."

"Dare we imagine that our labors for justice and peace will not be in vain?" he asked the group. "Dare we dream of a life-world beyond the grave?"

Just like the women who first discovered Jesus' empty tomb, Pramuk said, are those who dwell in modern cemeteries, lingering by the graves of deceased loved ones. "What has drawn them there?"

He asked this question in a setting where aging and diminishment brush most conversations regarding religious life, where the unintentional uniform is white or graying hair, its participants ready to address grief in their communities. The relevance of his segue was palpable.

"To say in one breath that the dead are not here, in the earth, this place of burial, may be to suggest in the very next breath that they are here: We simply need to know where to look, and how to listen," he said.

One group of sisters, following reflections after his lecture, suggested that there is a freedom behind the question of diminishment and loss of property: "What do we have to lose?" they wondered, adding that there's an energy and excitement behind that prompt.

In his address, Pramuk said the way the slave songs "lean into the mystery of Resurrection faith awakens in the believing community a fierce conviction that our struggles and hopes will not ultimately be in vain," that even for just the duration of the song, one can experience the "power of Resurrection faith."

"This is the sound of political theology that is at once mystical and contemplative at its very deepest roots. To sing the forgotten dead is to breathe them back into life in the wellsprings of our creativity, our commitment, our hope.

Sisters later said that upon reflecting and experiencing the quiet in contemplations, they learned that it's not about feeling the presence of the Spirit, but about "how present we are to the Spirit." Another added that the experience of the Spirit is more intuitive in silence than in words.

One sister said her group discussed an awareness that the Spirit speaks through everything, particularly through their history, pain and diminishment. We have to be present to that, she said, "among ourselves, beyond ourselves, and even beyond humanity."

In his speech, Pramuk emphasized "the vulnerability of living from this vision of a future that cannot yet be seen, of loving and leading others into these liminal spaces between life and death, between what is and what is yet possible" — just as the Rev. Martin Luther King Jr. had.

"Here is the distinctive paradox at the heart of Christianity: that our faith in life on the other side of death galvanizes our courage to labor for justice on this side." He called to mind sisters who have been killed, including Notre Dame Sr. Dorothy Stang; the four Missionary of Charity sisters in Yemen; and, in Mississippi, Srs. Paula Merrill, of the Sisters of Charity of Nazareth, and Margaret Held, of the School Sisters of St. Francis of Milwaukee.

Merrill's and Held's congregations, he pointed out, stood against the death penalty for the man charged with their murders.

Pramuk also cited an interview with St. Joseph Sr. Helen Prejean, known for her crusade against the death penalty, in which she explained how she copes with death:

What do you do with your grief, what do you do when you find out that things are so wrong and people are being executed who are poor and have no redress?

You take that outrage, you take that sorrow and sadness, and you work for justice, so that other human beings don't have to experience the same thing.

That, Pramuk said, is political theology, "not far from the pathos of the spirituals — singing and praying and acting for justice in the world as an expression of wonder, resistance and hope."

Concluding his lecture, he said, "Whether the hope of the Gospel 'sings true' is a matter that each of us alone must decide at the beginning and end of every new day, a wager tested against a lifetime's journey of love and loss, of belonging and redemption.

"For my part, I have come to believe that life is too short to play in small, self-enclosed circles. We feel our way through the darkness of Resurrection faith by reaching out to hold the hands of others. We sing our way from fear and hesitation to courage and fresh hope. We make the path forward together by walking it."

Though Pramuk's keynote address kicked off the first full day of the assembly, which also included governance sessions and deepening groups, it was still fresh on the sisters' minds as the day came to a close, with some sisters feeling inspired to sing their reflections they shared as a group.

St. Joseph Sr. Liz Sweeney, the contemplative guide at the assembly, said Pramuk's speech "plunged into the depths of misery, black suffering, and our suffering," part of a flow of life connecting from the past to the present.

"Those who lived before us were present, and we could feel them."

*An earlier version of this article listed Pramuk's former position at Xavier University. He began with Regis University on Aug. 1.

**An earlier version of this article gave an incorrect number of sisters attending the assembly.

'We are no longer girls'